Above: Charles Hodges' Geographical cards were originally published in 1827. The Aces carry maps of the four continents; the court cards depict historical persons representing the four continents and the other numeral cards show maps of the respective countries. The aces of Spades Hearts, Diamonds and Clubs respectively represent the Americas, Europe, Asia and Africa. George Washington appears as the King of Spades and King George IV as the King of Hearts. A magnificent Chinese Emperor appears as the King of Diamonds. These maps from the numeral cards were re-used for the Astrological cards shown below. The images above are from a facsimile edition of cards in the Cary Collection at Yale University. Images courtesy Rod Starling.

Charles Hodges operated as a bookseller and stationer at 27 Portman Street, Portman Square, London, from 1825-6 until 1830. Following the tradition of engraved pictorial playing cards depicting educational, scientific and other subjects, which had its heyday in England during the 17th-18th centuries, Hodges published these Geographical and Astronomical packs starting in around 1827. The Geographical cards (shown above) were probably inspired by a pack made in France by René Janet in 1825 called “Boston de l'Univers ou Jeu des quatre parties du Monde”. The English version is believed to have been made for Hodges by Stopforth & Son in London. The Astronomical pack (shown below) was also likely made by Stopforth & Son. These are amongst the last of the finely engraved English packs as chromolithography was soon to take over.

Hodges' companion pack dealing with astronomy had numeral cards carrying diagrams of constellations and their pictorial representations; the court cards represent classical deities. The aim of the game was to obtain pairs of map and constellation cards from similar parts of the terrestrial and celestial globes. Information about the locality was printed at the bottom of the cards and the latitude or declination was displayed as a corner index at the top left under a large 'N' or 'S'. The maps which were used in the Geographical cards were again re-used, without any suit signs stencilled in, to complete the Astrophilogeon decks. 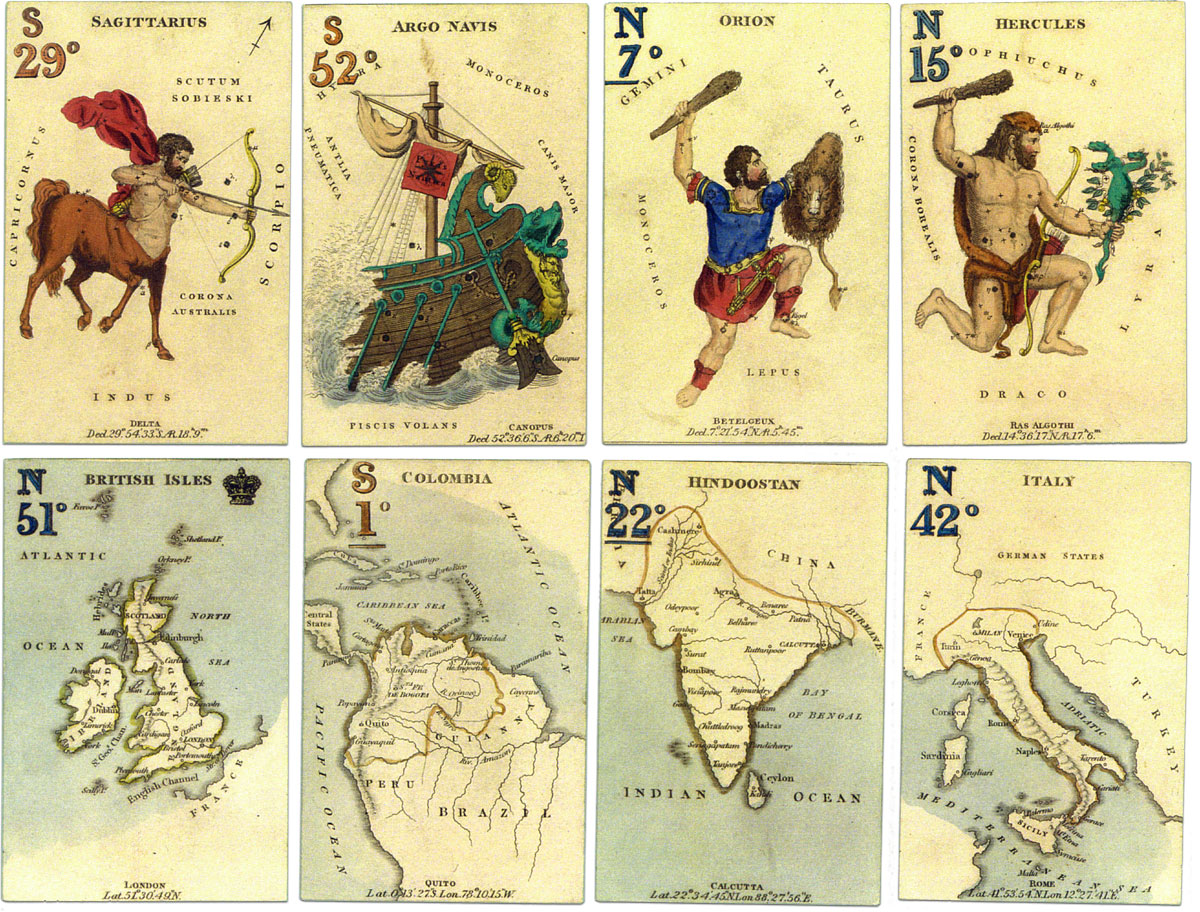 Above: Astrophilogeon, c.1828, made for Charles Hodges by Stopforth & Son. The basic aim of the game was to obtain pairs of map and constellation cards from similar parts of the terrestrial and celestial globes. The maps used in the Geographical cards with stencilled pips (below) were re-used in the Astrophilogeon decks (above) with the extra information over-printed from a second plate.

Hodges had published supplementary sets of 40 map or constellation cards with no suit signs or other information printed on them, or accompanying court cards, as New Geographical Cards and New Astronomical Cards, and was able to re-use the same plates for both his Geographical and Astrophilogeon decks with the additional information over-printed from separate plates or stencils. After Hodges ceased trading in c.1830 the packs were re-issued in 1838-9 by William and Henry Rock possibly, at first, using the same plates but subsequently moving to lithographic printing.