Aman had some friends over to play cards and his mother came also. He was unmarried but had a live-in house keeper. When the evening was over his mother said to him "I'm not saying you are, but I think your housekeeper is doing more than keeping house for you". He said "No Mother… nothing like that is going on". The next day the man's housekeeper told him that some of the cards were missing & could not be found. A few days passed & he told his mother about the missing cards. His mother said, "well my son, if your housekeeper was sleeping in her own bed she would know where the missing cards are." [Submitted by Nancy Pope of Indiana, USA]

An out of towner came into Reno and looked for a nice card game. At one casino he found a table at which there were five players. One of them was a beagle. The man said, "Sure is something, a dog playing cards." Another player said, "He's not so good. When he's got a good hand, he wags his tail!" [Submitted by Kirk Kozol of Unionville, USA] 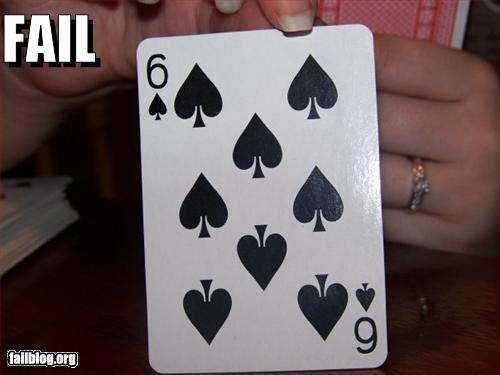 A game is going hot and heavy, in which each of the players is a man of the cloth. At about midnight a policeman bursts into the room. "All right, break it up!" One clergyman says, "Break what up?" "Come on. I know you've been playing cards. The policeman looks the priest straight in the eye. "Have you been playing poker, Padre?" The priest says, "Of course not." "How about you, Reverend Cagle?" The Lutheran minister shakes his head. "Me, play cards?" Rabbi Stein also denies playing, as do two of the other men. The policeman asks the Baptist minister, the last man left, "How about you Reverend? Have you been playing cards?" The Baptist minister says, "With whom?" [Submitted by Joachim Schlicht]

Dr Dr I feel like a pack of cards. I'll deal with you later! [Submitted by Emma Reardon, Somerset, UK]

A woman once said that a Man is like a deck of playing cards. You need a heart to love him, a diamond to marry him, a club to beat his head in, and a spade with which to bury him ! [Courtesy of www.nicefunnyjokes.com].