There are at least two, slightly different versions of this pack. Type 1 is on thicker paper in a deeper box. The decoration on the red-suit Aces is barely visible. The backs are plain orange-red. Type 2 is on thinner paper in a slimmer box with different script. Darker red used for the red suits. The decoration on the red-suit Aces is more visible. The backs are brown. There are also differences in the telephone numbers and websites given on the backs of the tuck boxes. It is not clear whether one pack predates the other. 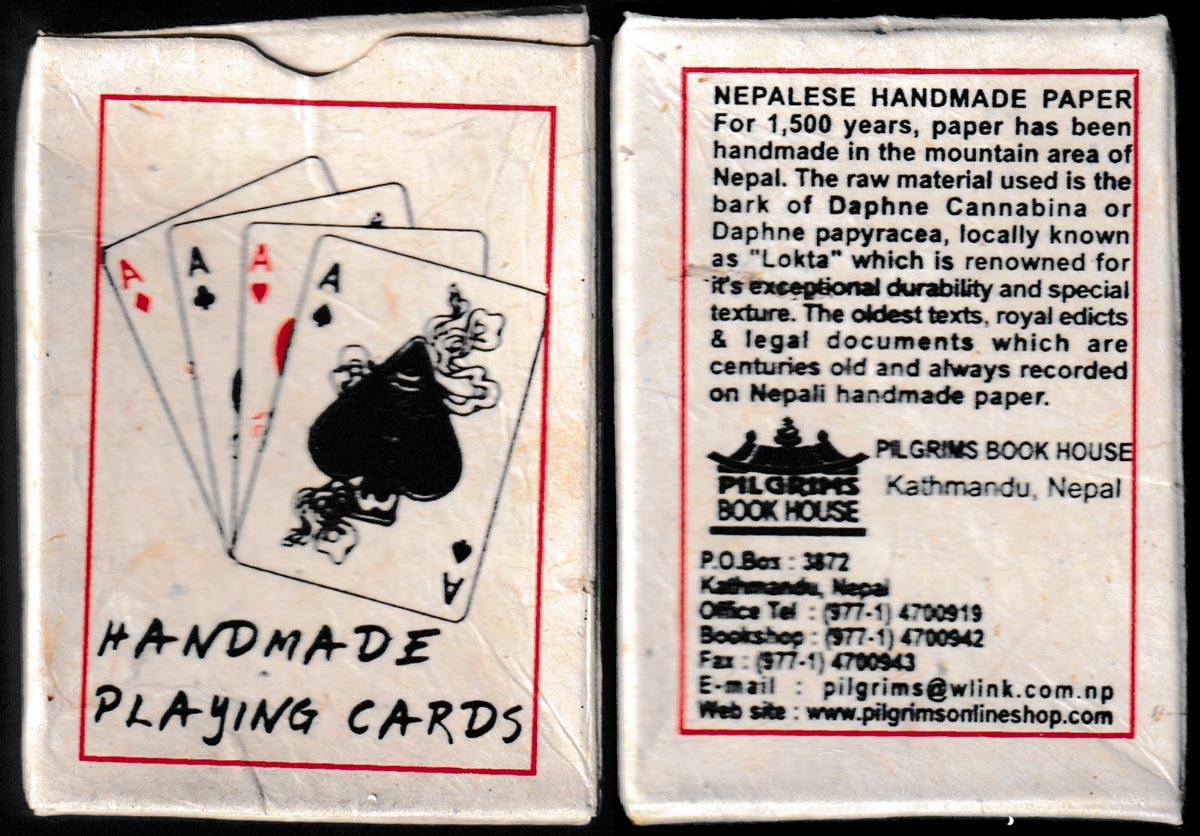 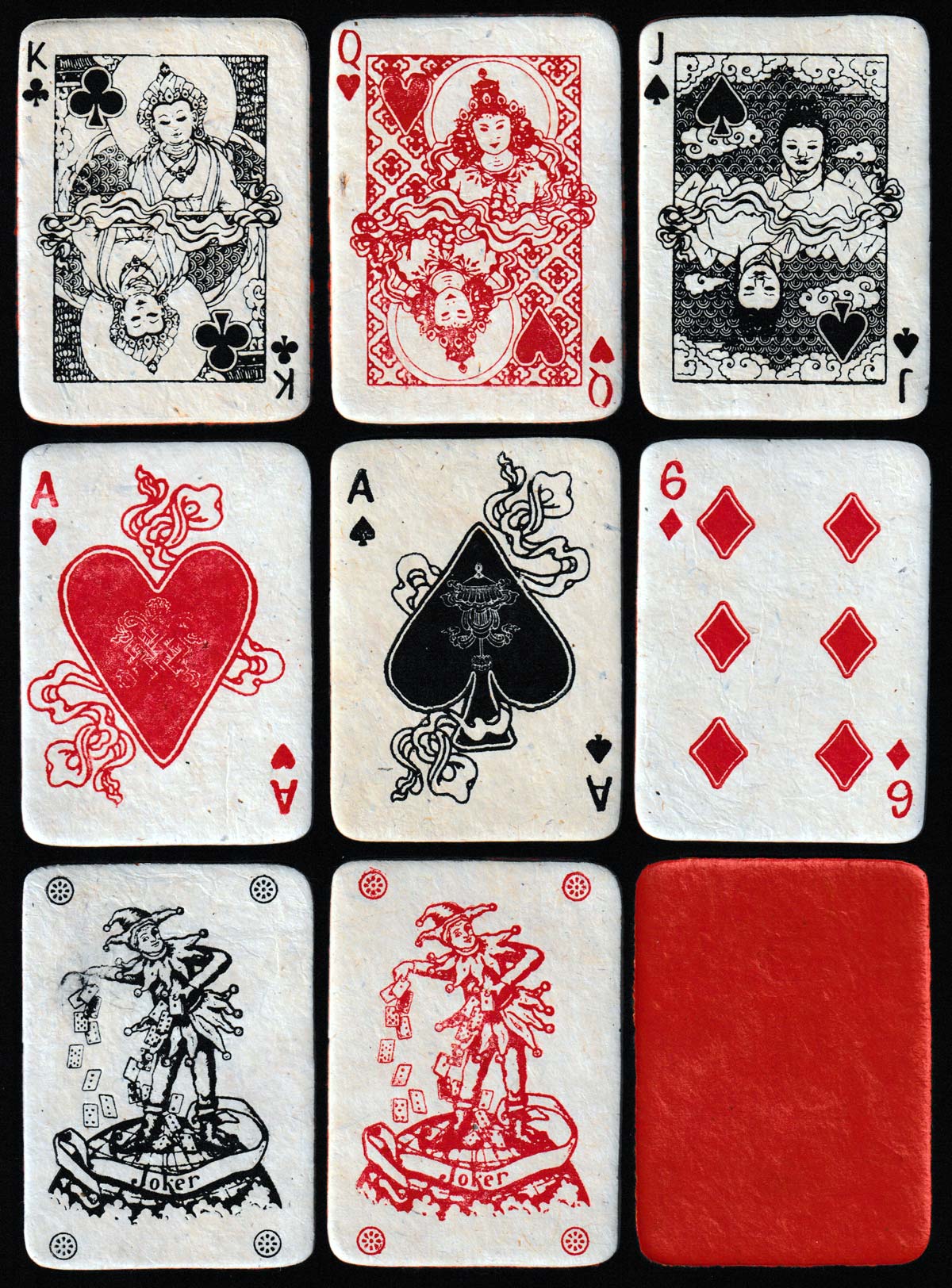 Above: size 60 x 84 mm. 52 cards + 2 Jokers in a handmade box. The Joker design is a copy of one by Carta Mundi. The ace of hearts contains an Endless Knot motif within the central heart, overlapping without a beginning or an end, symbolising the Buddha’s endless wisdom and compassion. The ace of spades contains a Parasol decorated with precious jewels which represents the Buddha’s unfathomable wisdom and compassion. 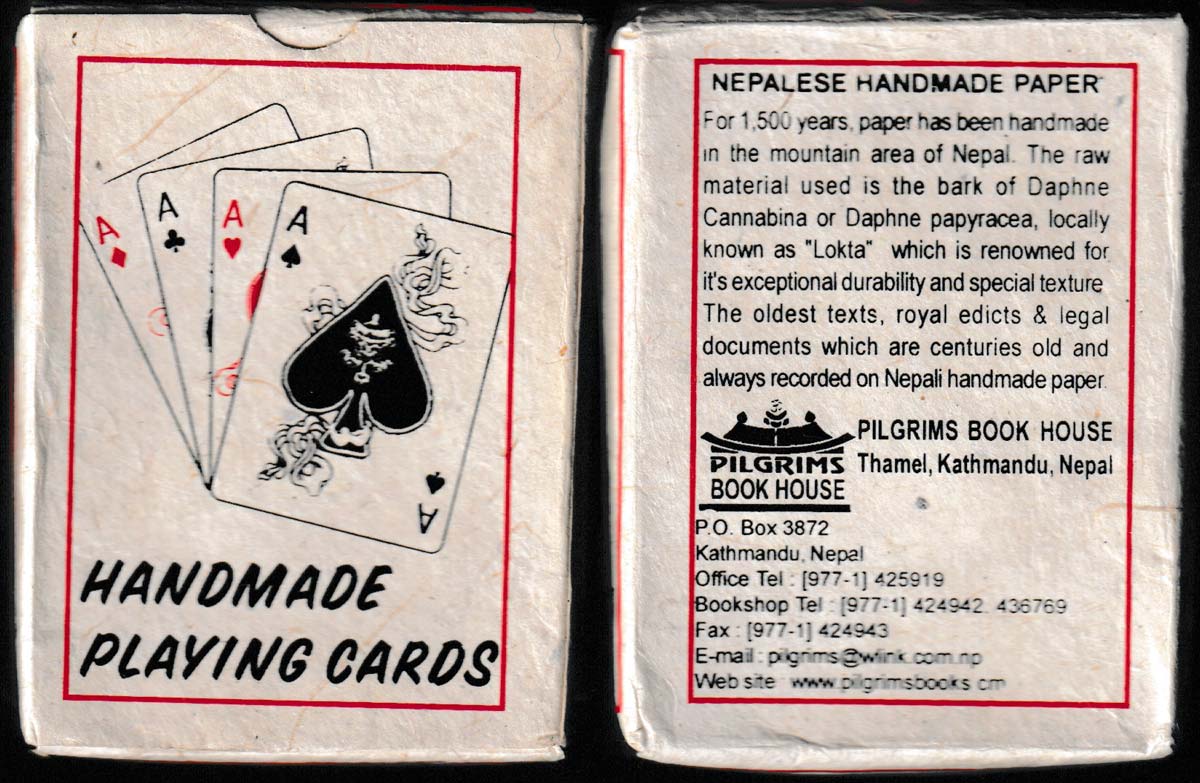 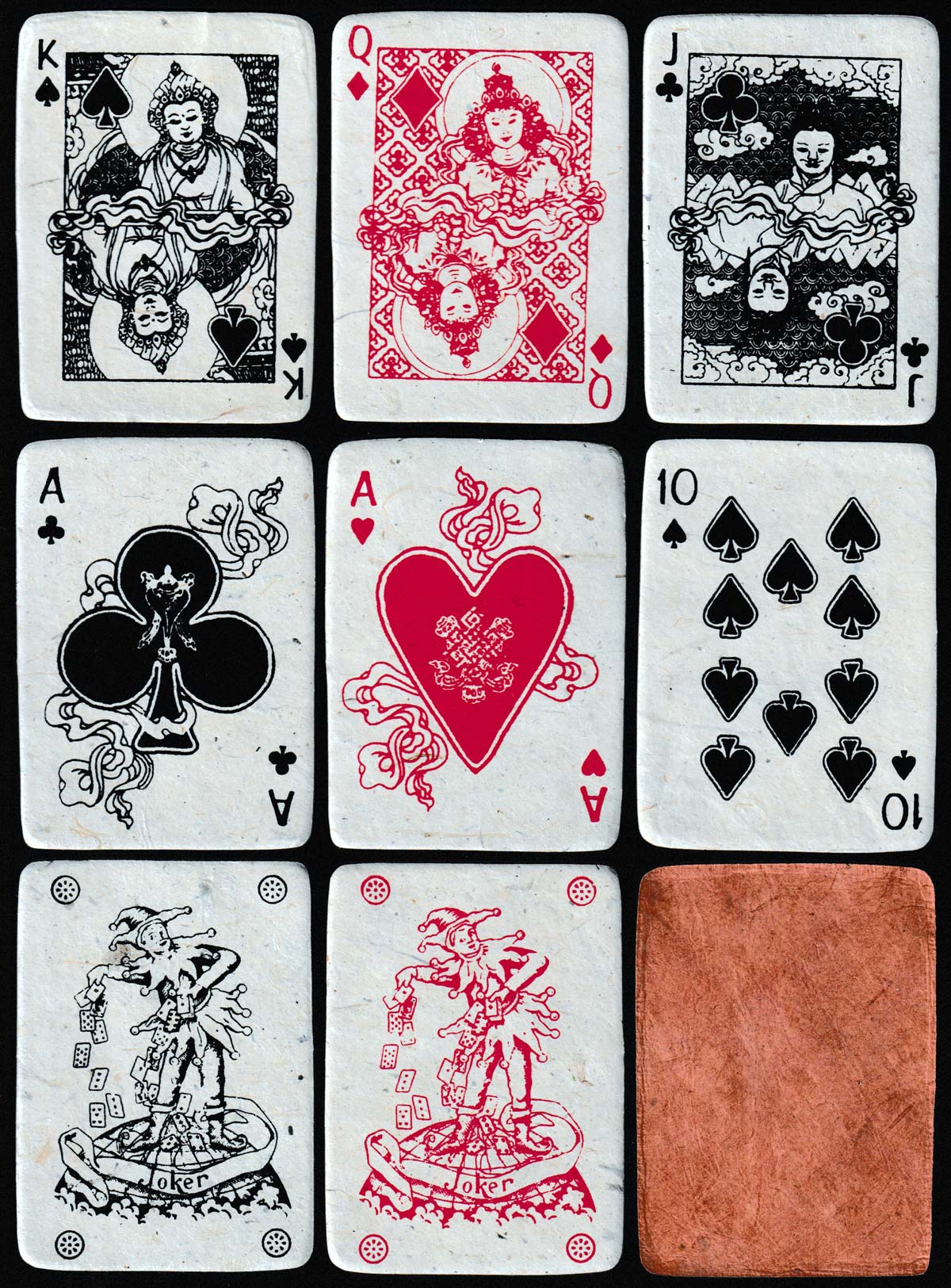 Above: Nepalese Handmade playing cards, 52 cards + 2 Jokers in handmade box. The backs are brown. The ace of clubs contains a Conch motif, one of the eight Auspicious Symbols, representing the proclamation of the truth of Dharma fearlessly, which is profound, melodic and far-reaching. The ace of hearts contains the Endless Knot described above.

Pilgrims Book House used to be the most famous (and best stocked) bookshop in Kathmandu. However, a disastrous fire in 2013 wiped out almost its entire stock. It is likely that these packs predate the fire as they are no longer being offered on the company’s website.

Samten de Wet has kindly provided extra information regarding the iconography and symbolism of these cards. “...it certainly is a blend of the ordinary playing cards, garnished with Buddhist motives. In the ACES are the AUSPICIOUS SYMBOLS - on which there is a wealth of material available online. The King and Queen &c are most likely stock images of Bodhisattvas, Buddhas – sourced from a Buddhist Nepalese Pantheon – with the Western Joker thrown in for good luck”.

Further comment from Dr Ben Joffe: “These are lovely! Agree with Samten that one would have to see the entire deck to get a better idea. The black Jack's face also looks a little like typical representations of Guru Rinpoche a.k.a. Padmasambhava, the 'second Buddha' tantric saint who tamed the autochthonous deities of Tibet, if only because of his thin curly moustache but it's a bit hard to say.” Rock paintings and engravings of the San people, better known as the “Bushmen”.

Estonian national costumes and everyday items feature on this pack made in Estonia.

A colourful pack of round cards with Ganjifa designs by Asha Industries, Mumbai, India, 2002.

Happy Families of the World

Happy Families of the World published by Pepys Games, 1963.