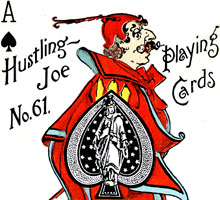 Hustling is the deceptive act of disguising one's skill with the intent of luring someone to gamble with the hustler, as a form of confidence trick. Hustling Joe himself appears on the Ace of Spades dressed in red. The Joker may be an accomplice in the scam. The non-standard and slightly comical court cards have different coloured backgrounds in each suit, and each pip card features a unique and amusing scene which tells a story. But this is not quite a “Transformation” deck in the true sense as the pips are not properly integrated into the designs. Nevertheless the cards have a certain charm which would have appealed to children if not to serious card players. 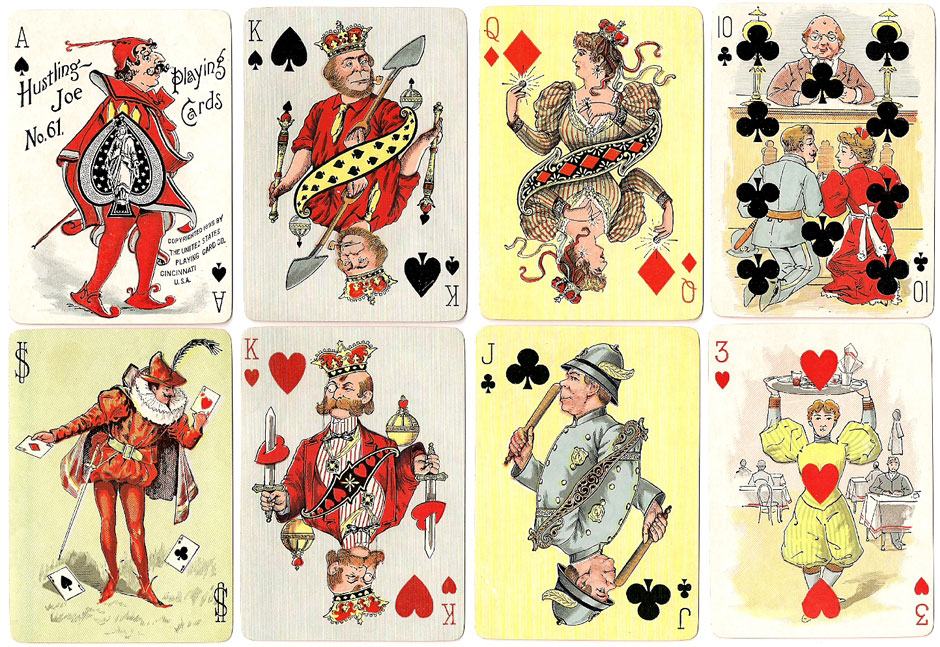 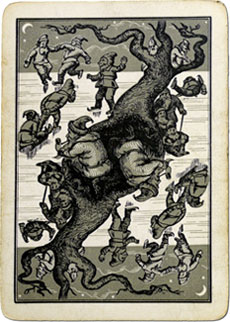 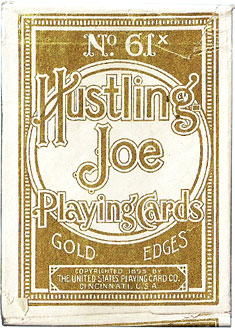 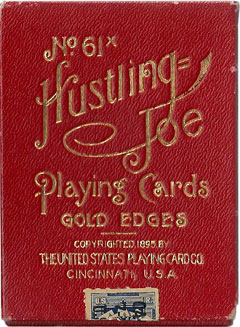 Above: the first edition of Hustling Joe No.61 published by the United States Playing Card Co, Cincinnati, Ohio, 1895. While in the first issue of the deck his costume as seen on the Ace of Spades is red, a second edition was immediately issued to correct some design flaws found in the first edition and his costume was changed to yellow. The back design is a double-ended black and white scene of gnomes ice skating in the moonlight. The wrapper is printed in gold, and the deck has gold edges, as stated on the box.

All above images are from the collection of Rod Starling, author of "The Art and Pleasures of Playing Cards", available on Amazon►

Above: cards from the first edition. Courtesy Rex Pitts. 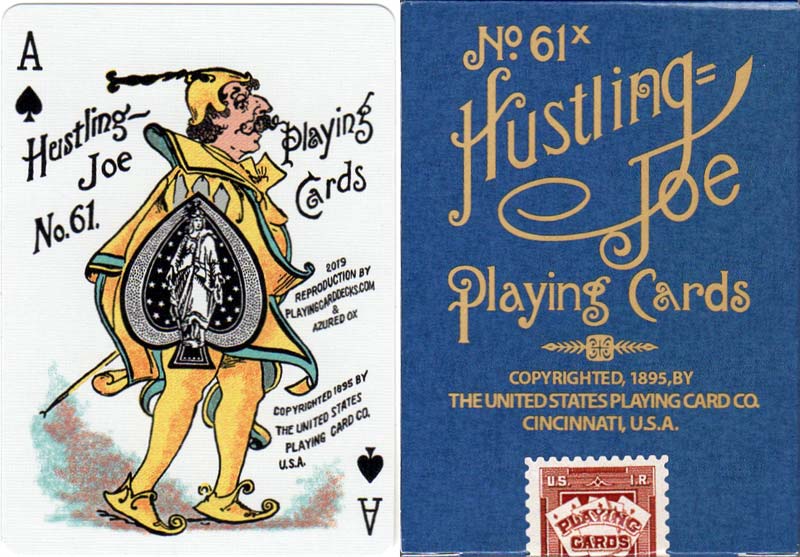 Above: the ace of spades in the repro pack has a notice: "2019 Reproduction by plyingcarddecks.com & Azured Ox"

Hustling Joe No 61 is a reproduction custom pack aimed at card collectors and card magicians, based on the second edition of the “Hustling Joe No 41” semi-transformation deck originally published by US Playing Card Co in 1895. Produced by card magician Will Roya, illustrated by Azured Ox, manufactured by USPCC in 2019 in two colours: blue and green (each with a different back design) in a limited edition of 2000 packs of each colour. The blue pack has the original ice skating gnomes back design, the green pack has the frogs design back.

Like the 19th century originals, the reproduction pack is cut to poker width. In addition, the reproduction packs include an additional identical joker, each joker differing only in the colour of the man’s outfit and also a double-back card to further expand the scope for use by card magicians. The designs themselves have been reproduced from originals keeping the same comic images with pips over-printed, though the cards are not gold-edged like the originals. 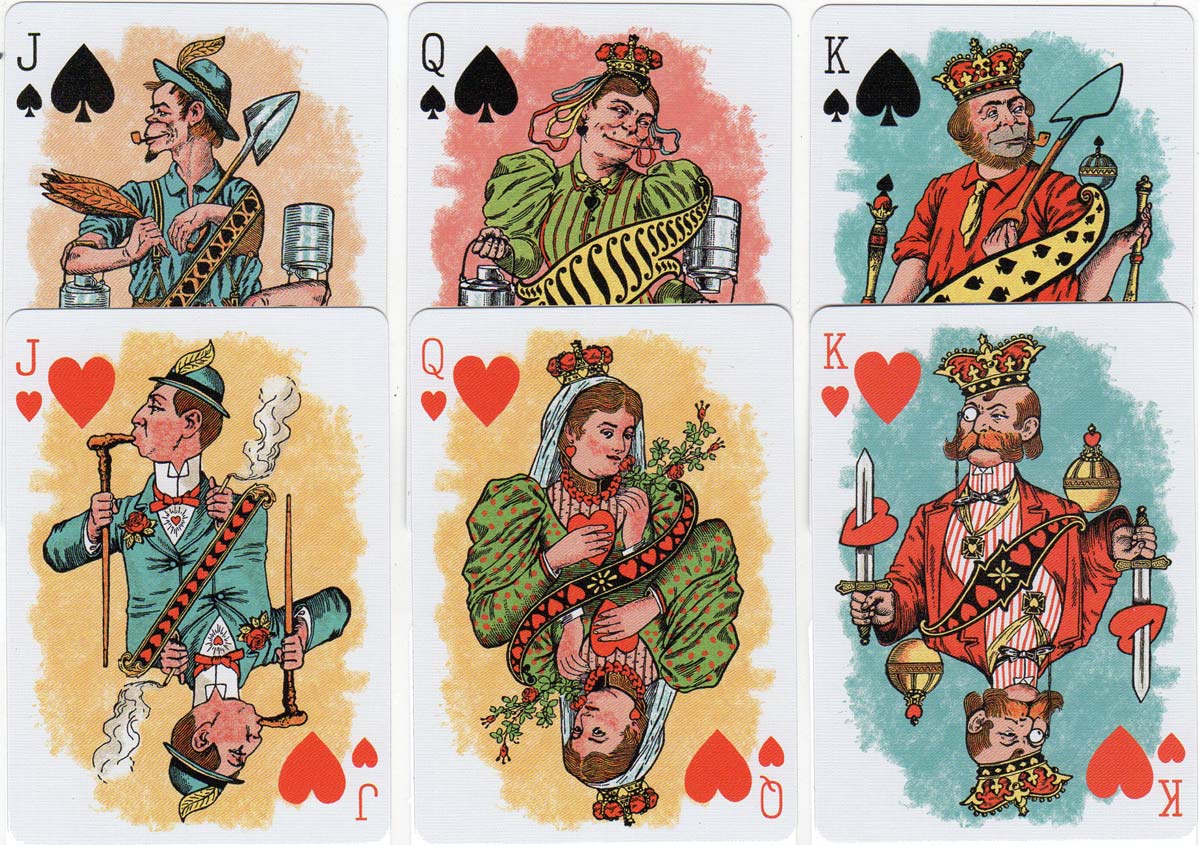 Above: cards from the 2019 reproduction of “Hustling Joe No 41” semi-transformation deck produced by Will Roya for PlayingCardDecks.com►

Each pack is supplied in a colour coordinated box - either blue or green, corresponding to the colour of the backs of the cards inside, and printed with gold ink and sealed with an imitation tax stamp (of a design used between 1894 and 1896) and wrapped in cellophane. Packs are sold either as a pair comprising one pack of each colour; individually or as an uncut sheet.