The United States Playing Card Co. (USPCC) represents an amalgamation of all the major American card-makers of the late 19th and early 20th centuries. As with Andrew Dougherty, the Dawsons have given us a comprehensive survey of the major stages of the firm's history in their reworking of Hochman's encyclopaedia, so I don't intend to repeat all those details here, except where they are relevant to my theme. As you might expect by now, I want to give a survey of the court cards that I know of that have been used by USPCC, often immediately after a take-over of some other company. I have had to do this at a distance of course, so there may be several designs I'm not aware of, but I hope the survey will be as comprehensive as I can make it. Any gaps I'd like to hear about.

It's often quite difficult to know exactly when a particular design disappeared in favour of one of the in-house USPCC designs. It would appear that the newly acquired design would be used for a while in the newly acquired brands, but eventually one of the commoner USPCC ones took over. This is always a disappointment for me! The date of the change-over can often be seen in the date on the AS of particular packs, though access to many more examples would be an even greater help to me. What is interesting, though, is that some of these designs have been resuscitated in recent years both by USPCC and other makers.

The starting point has to be the courts designed for the setting-up of Russell & Morgan in 1881. The commonest ones are those I have designated US1. (I don't use the prefix US to stand for USPCC, but for any major US design, including those of Arrco, Whitman, Brown & Bigelow and Gemaco.) 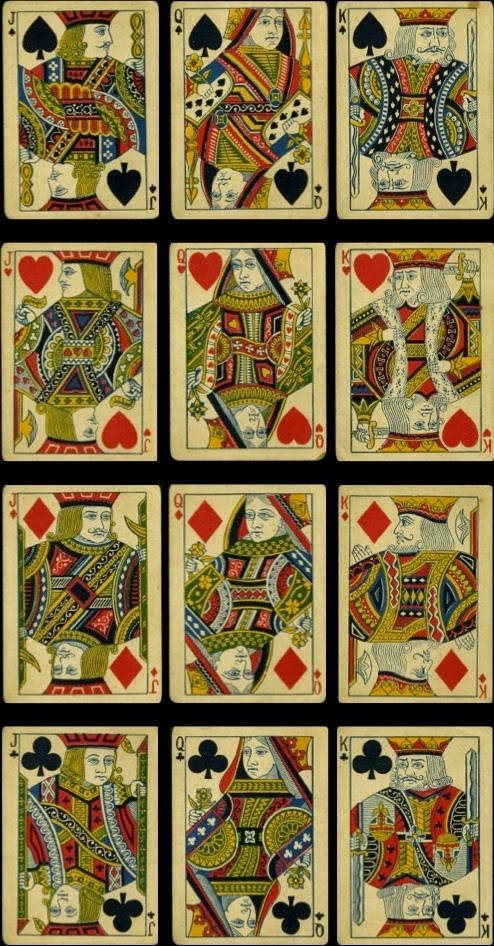 Notice that these are quite distinctive, though they have echoes of Goodall's design (perhaps not surprising, given the rôle Victor Mauger played in Russell & Morgan), but the JD is peculiar. His clothing is idiosyncratic and although his body has been turned to the left, his head has remained unturned. In c.2000 these courts were reproduced in a pack of Texan 45s for Marlboro cigarettes. Some time around the change to USPCC in 1894 these courts were redrawn with a more traditional JD and were used with small frames, as in Fauntleroy patience, Trophy Whist with standard courts, Astrological Fate Cards 72 and New Index 87. They are still in use in large index packs and have been copied by Copag for many years.

US1 was used by other US makers such as American Playing Card Co, Kalamazoo, which in turn ended up as part of USPCC some time after 1915. The APCC cards were somewhat more crudely drawn than their R&M counterparts.

However, there is also a R&M version of US1 in which the JD is turned normally, but is not like the JD of US1.1, and the KC and QD look more like those of Goodall's design; this I designate US1.2. I have only seen it in red and black and I assume it was used in Steamboats, the cheapest grade.

US1 and US1.2 seem to disappear before WWI.

The National Card Co. started up in 1886, but as a serious competitor to R&M, it was bought out in 1893 and became part of USPCC the next year. It had its own courts, US2, similar to US1, but always with a traditional turned JD.

Above: National Card Co., US2

Some of the early US Printing Co. packs had US2 courts, but in several taken-over brands they were eventually replaced by the in-house US4 (see below). There was a whist size, too, US2.1, which was continued in Canada up until the 1940s. A good example of the replacement of constituent companies' courts by USPCC ones is furnished by the Columbia Whist series. Below on the left is a pack of c.1895 and on the right one of c.1900; both have the same back design (centre).

Before the end of the 19th century US3 had been introduced and can be found in the indexless bézique packs of 1899 and wide Congress packs.

A version with oddly coloured hair was used in Ye Witches' Fortune Cards of 1896.

For further examples of US3 and the whist size equivalent, US3.1, see page 35. US3 seems to have disappeared around 1930, but US3.1 continued until the 1950s. A late example of their use can be found in some of the first Consolidated-Dougherty packs. They are used instead of the original NYCCC and Dougherty courts with various ASs. The packs below have US3 courts from the same plates with the ASs as shown. The 274 Planet pack has the blue back, the NYCCC pack has the common red back. 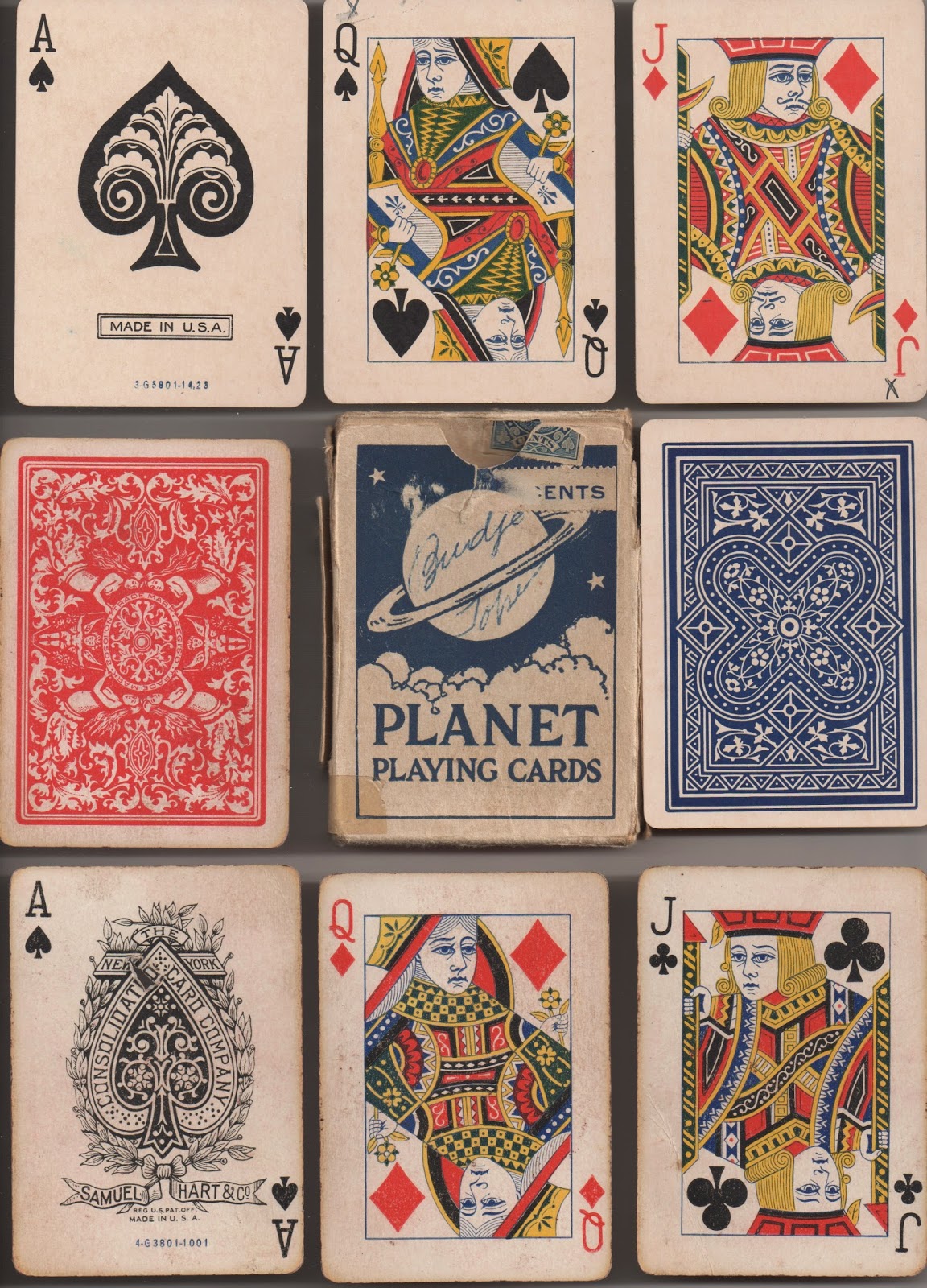 Above: Consolidated-Dougherty use of US3, c.1930

Although the Planet pack has an anonymous AS, the remains of the 10c tax stamp show AD in red. These packs are likely to be from the end of the period of use of US3. (Thanks to Tom Dawson for confirming my assumptions.)

The next set of courts took US3 as a basis and turned the usual six courts resulting in US4. These were introduced in c.1900 and continued in use up until the 1950s.

Above: US4, turned, two types of JS

The earliest version had a straight strap on the JS at the left (up until c.1906); later it was sloping. These courts were used in another reproduction of a Texan 45 pack in 2011. These were often the courts that ousted take-over courts, for example in National Card Co. Aladdin, Rambler and Apollo packs. A smaller firm which had its own design of courts was Perfection, with some influence from the R&M courts, which lasted from 1885 until c.1915, but in the later years under the guidance of USPCC. 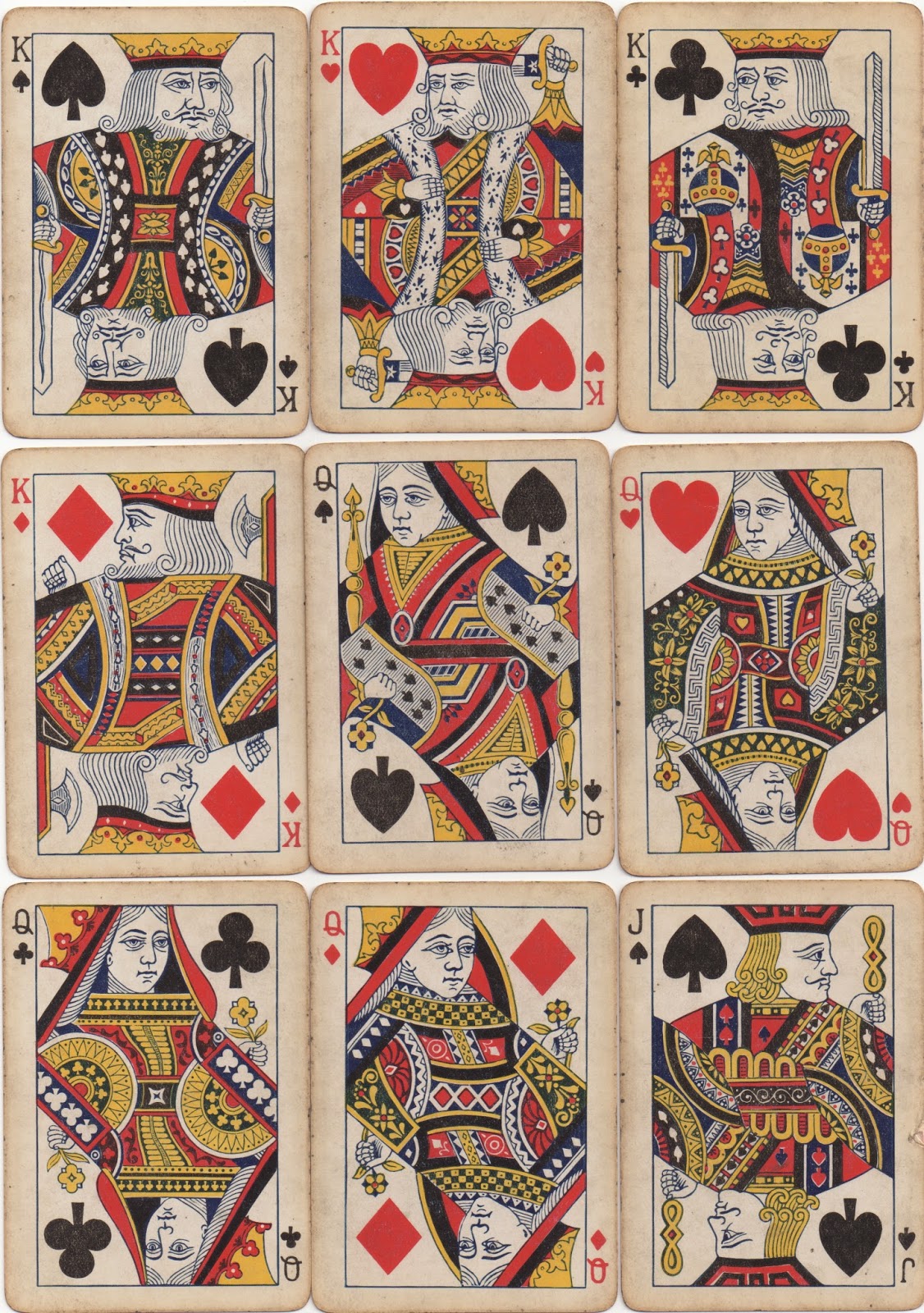 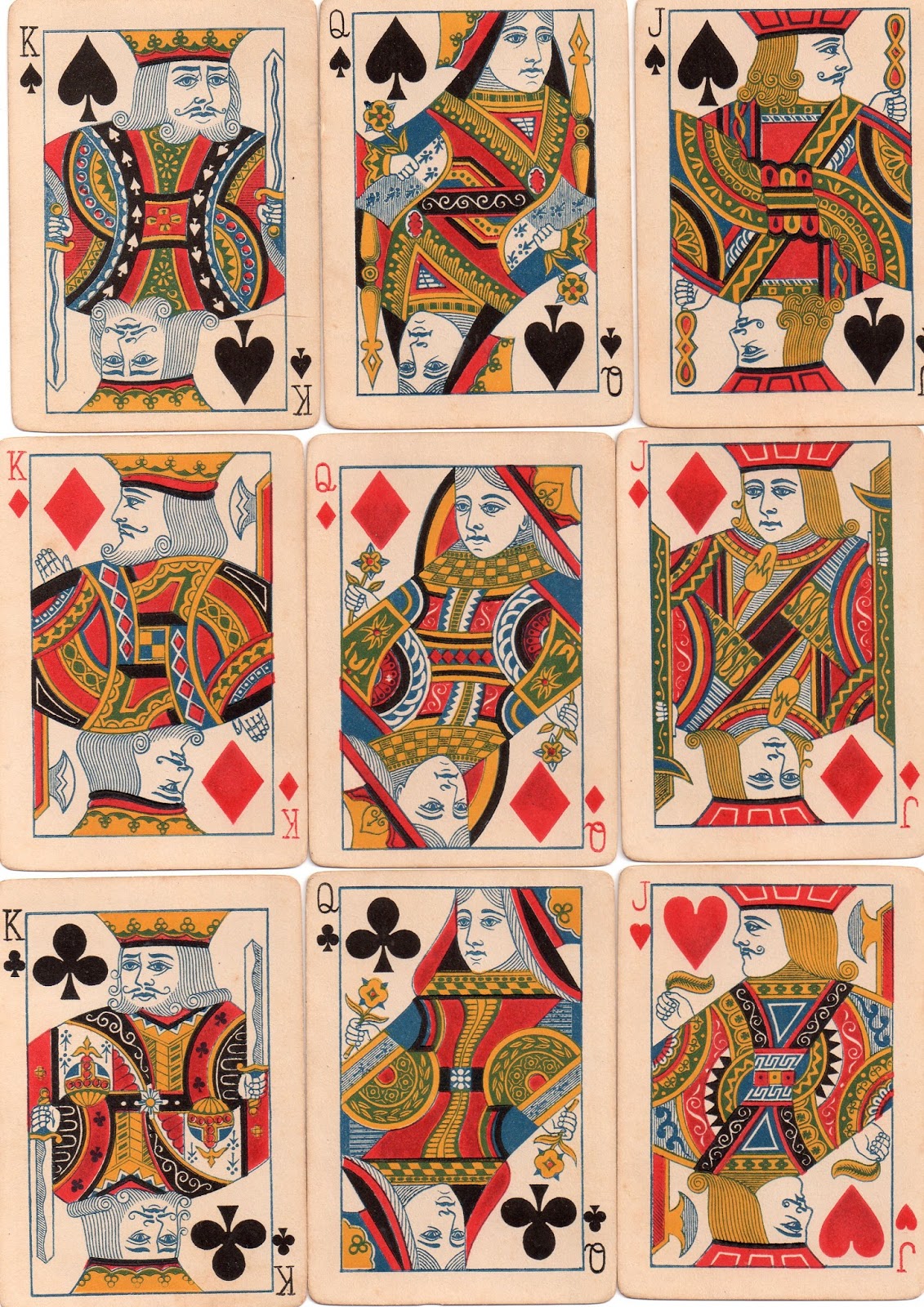 An important acquisition in terms of a court design that was adopted and adapted by USPCC was that of the American Bank Note Co. via Russell (US5). The ABNC courts had two particular characteristics of their own: the JS faces left, putting his suit-sign on the right, and the head of the QH is moved to the left, also putting her suit-sign on the right. There are both whist and wide sizes.

This design was reduced in size and used in bridge-width packs from the late 1950s. I'm giving this particular date on the basis of the packs imported into the UK from USPCC. In the early 1950s US3.1 courts were used in brands such as Congress, but by 1958 US5 had taken over. In the 1990s they were used in Delesi packs made for W.H.Smith, the UK stationer. Very recently I came across a revised version in which the QH has been altered to put her suit-sign on the left and all the other courts were turned as necessary to put all their pips on the left. 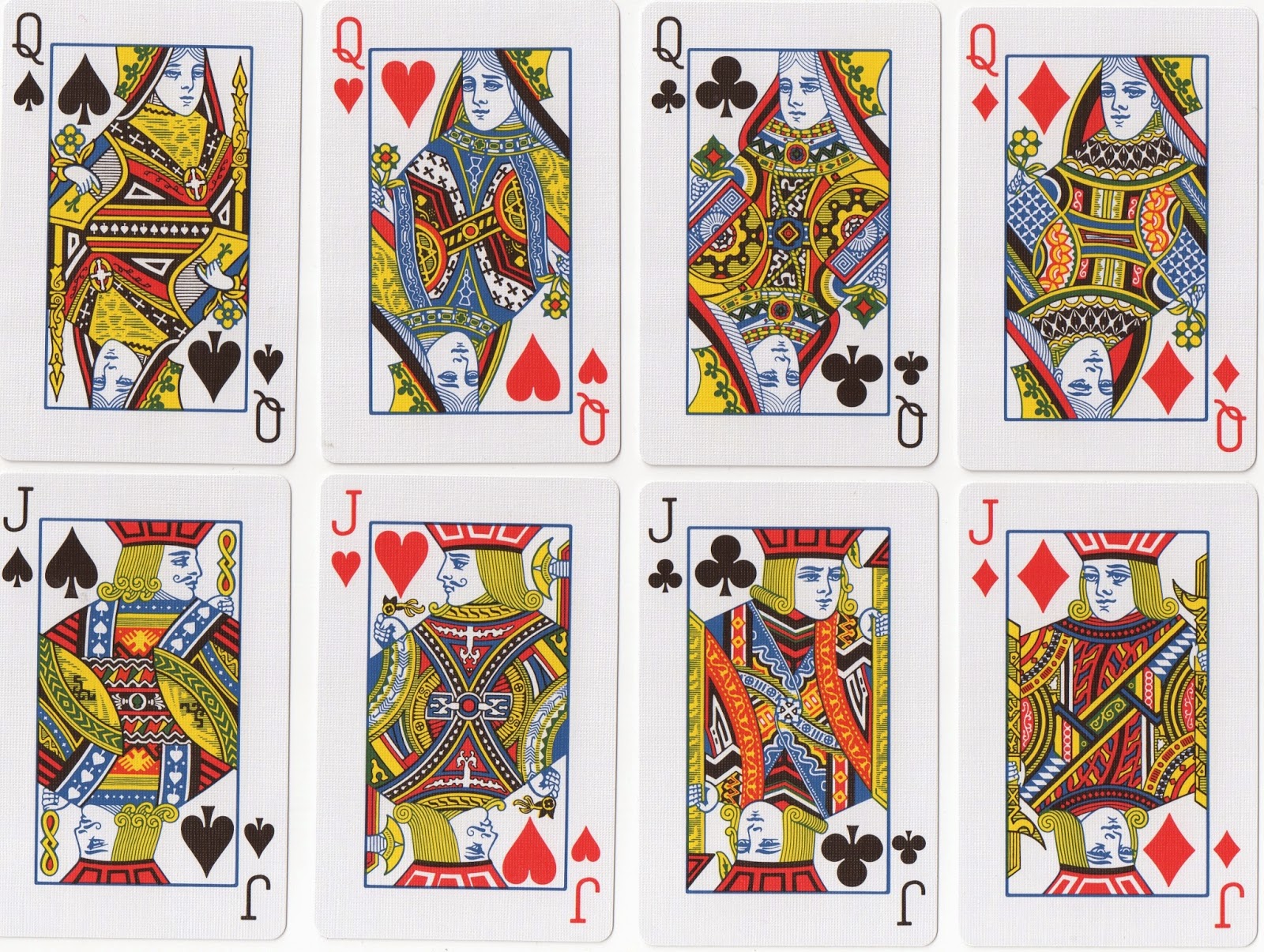 Compare this with the usual US5 version with unturned courts: 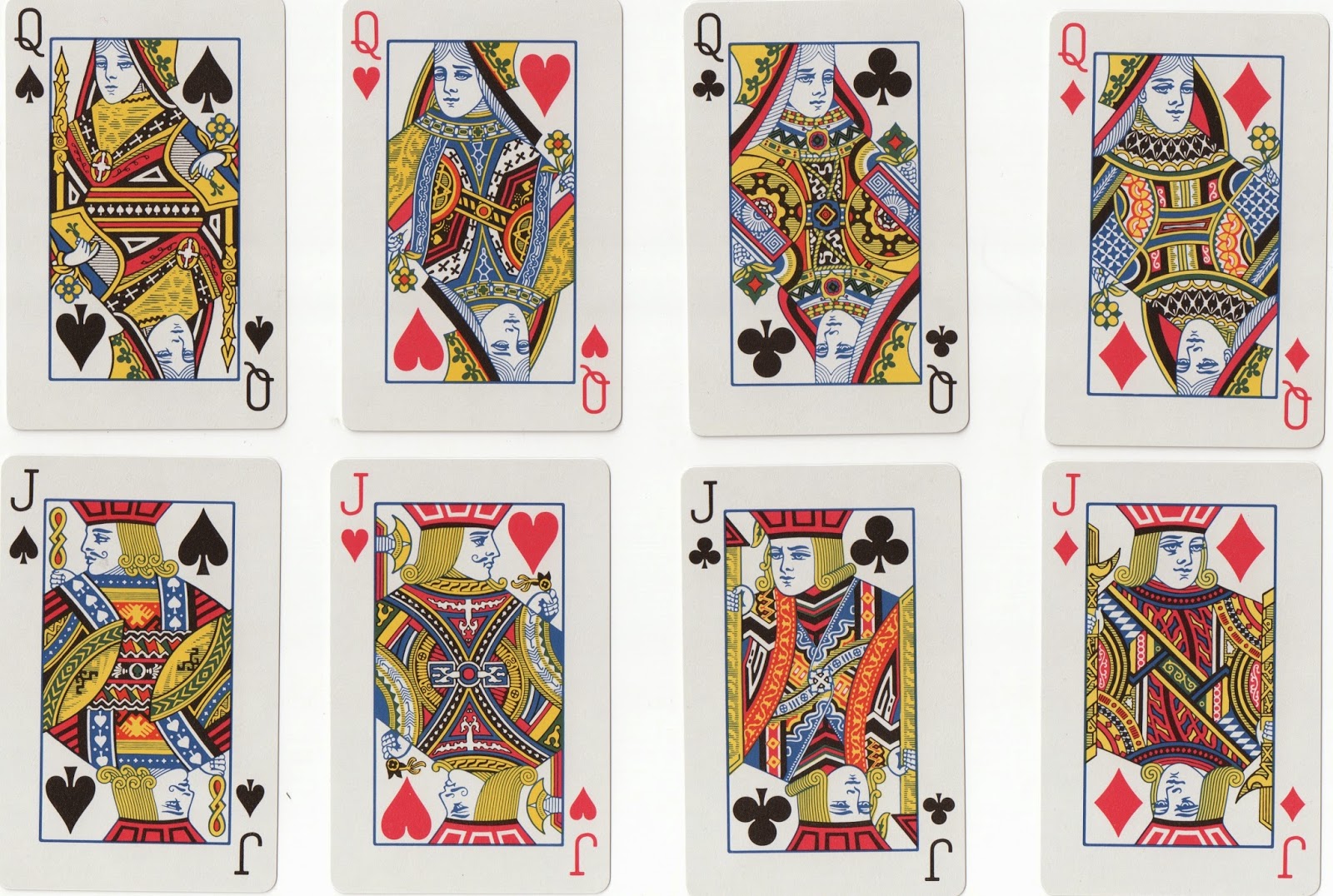 US5.1 is Whitman's design, which also has the unusual QH and the left-facing JS. It was also used in Kem all-plastic packs, though what connection there was between the two firms I don't know. Kem cards are now in the USPCC fold (since 2004). I don't think Whitman became part of USPCC. 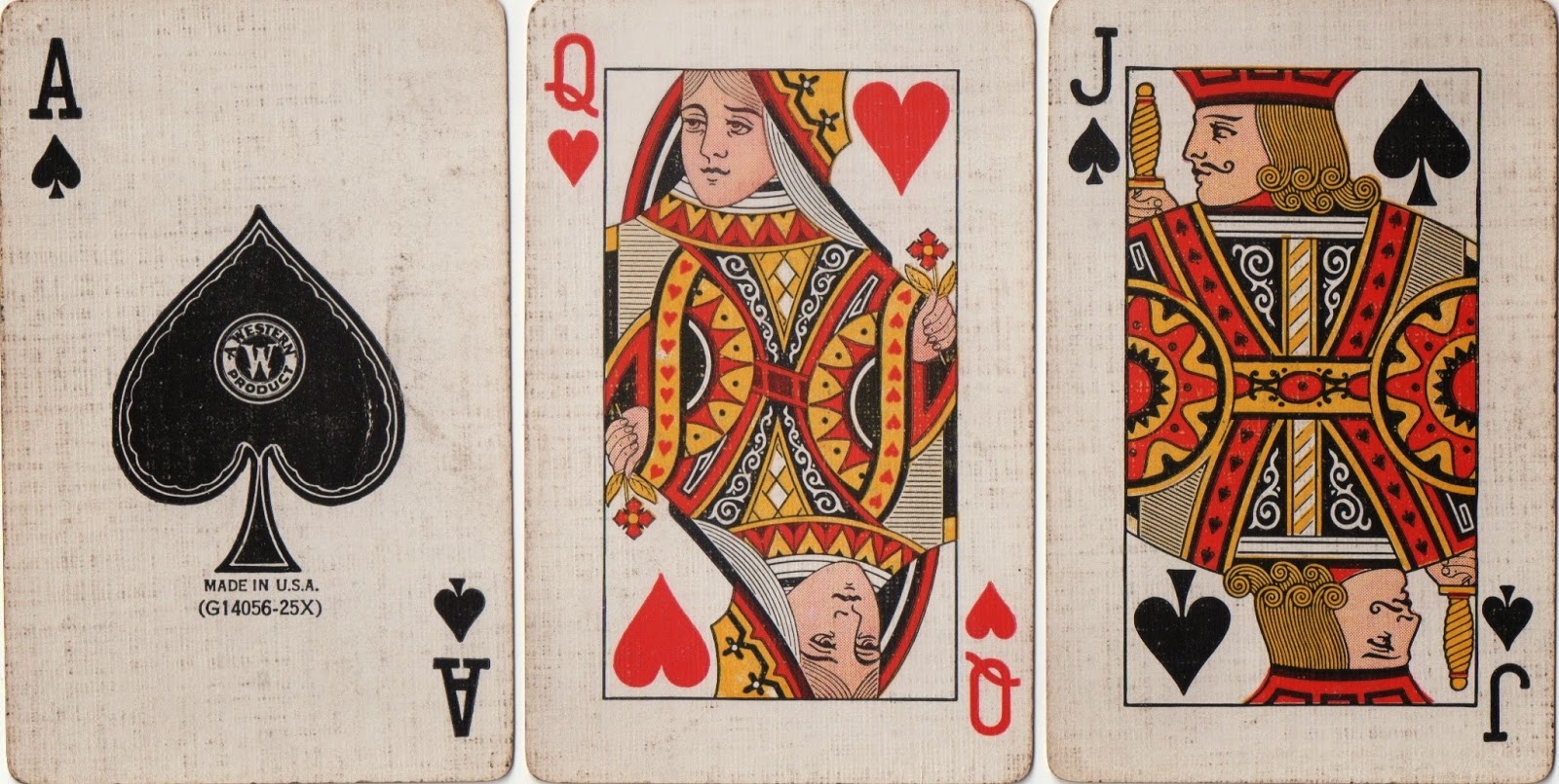 The New York Consolidated Card Co. (formerly Samuel Hart) was a crucial part of the USPCC set-up from 1894, although it was operated as a separate entity. At least until 1930, when the Consolidated-Dougherty Company was established as a division of USPCC, the firm continued to use its own courts. These had been developed from De La Rue's design, but had been considerably altered to look like an in-house design. There was an unturned (US6) and a turned version (US6.1). 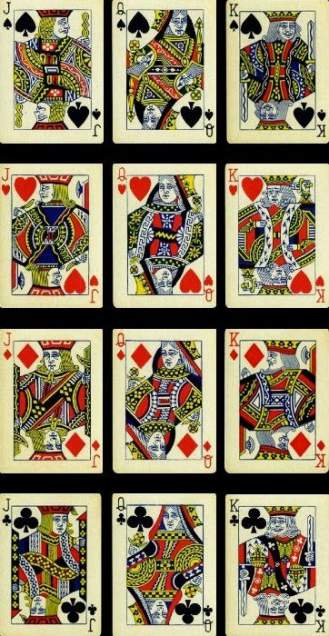 The earlier Samuel Hart courts reflected other influences and were not used after 1894, or even earlier. I give two examples below. 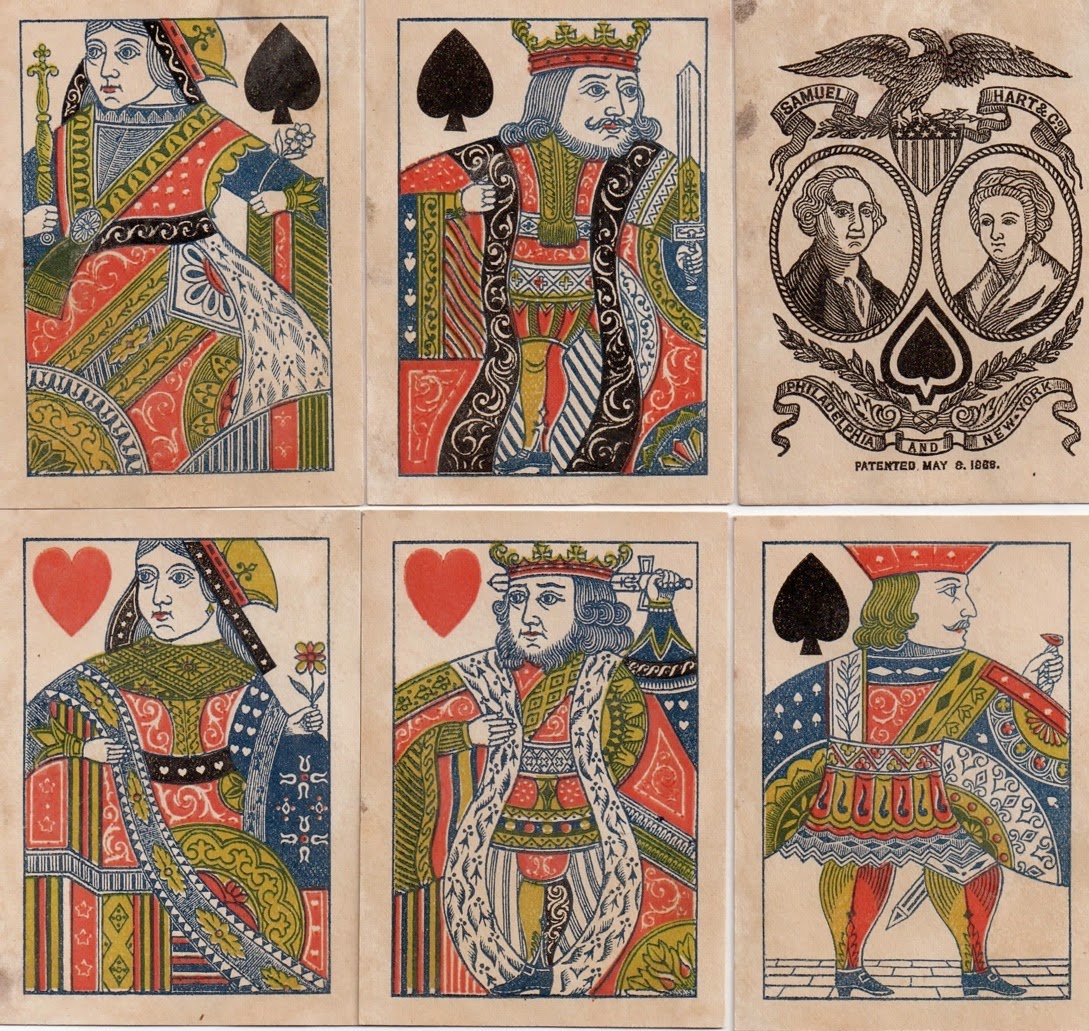 This pack has a fancy version of US8, especially noticeable in the kings' hair styles. The AS shows George and Martha Washington. The other example is double-ended and is based on Goodall's unturned G3 design. 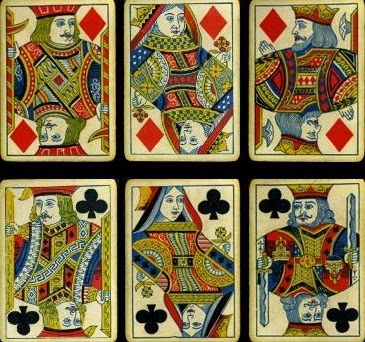 Alongside US6 and US6.1 NYCCC used a more sophisticated design in some of its brands. The earliest version of Bee 92 had wide courts of an idiosyncratic nature. 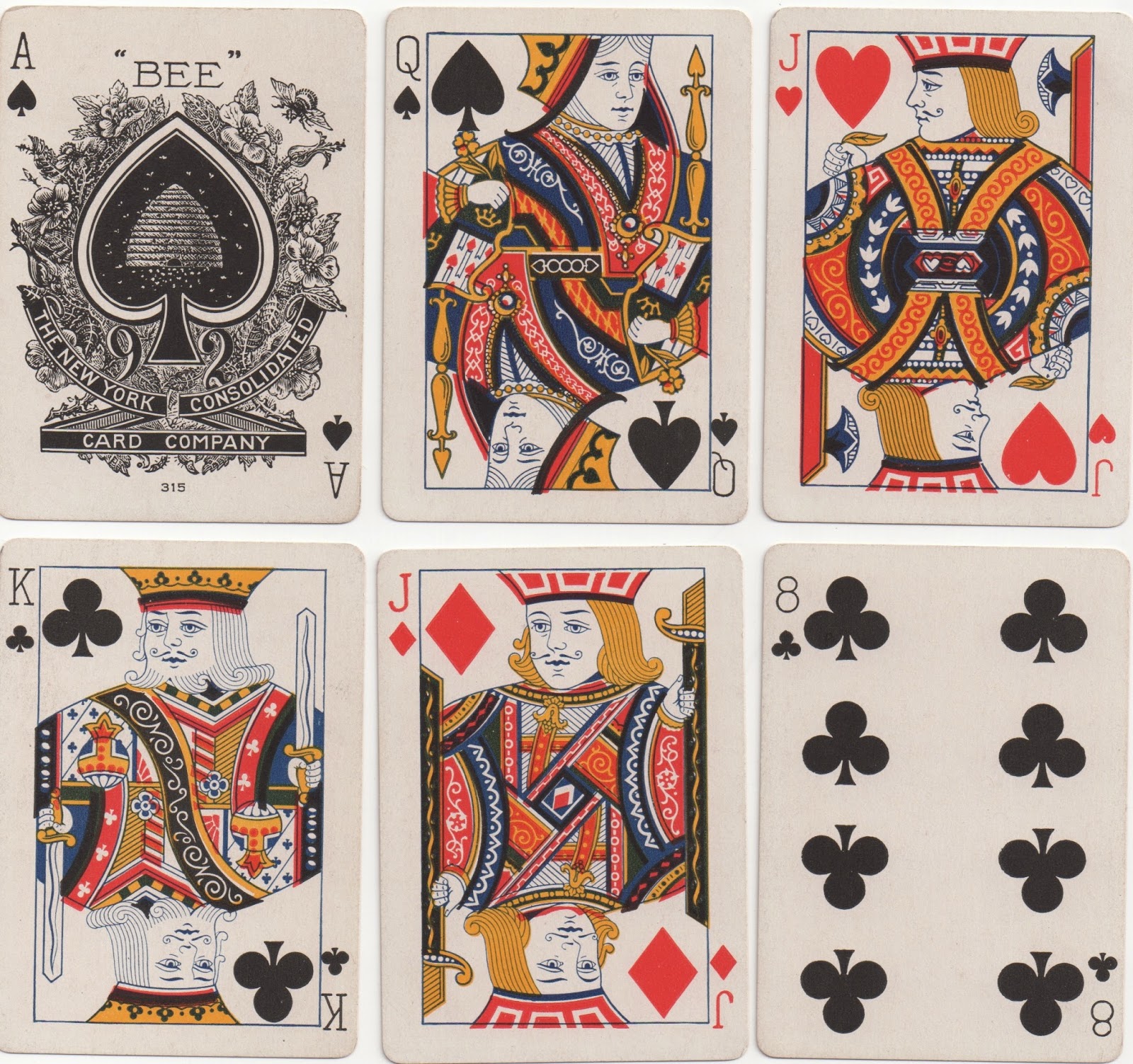 The corresponding whist/bridge cards, Hart's French Whist 96 and Bee French Whist 68, of c.1905-10, had a narrow version of the above courts, but unturned. 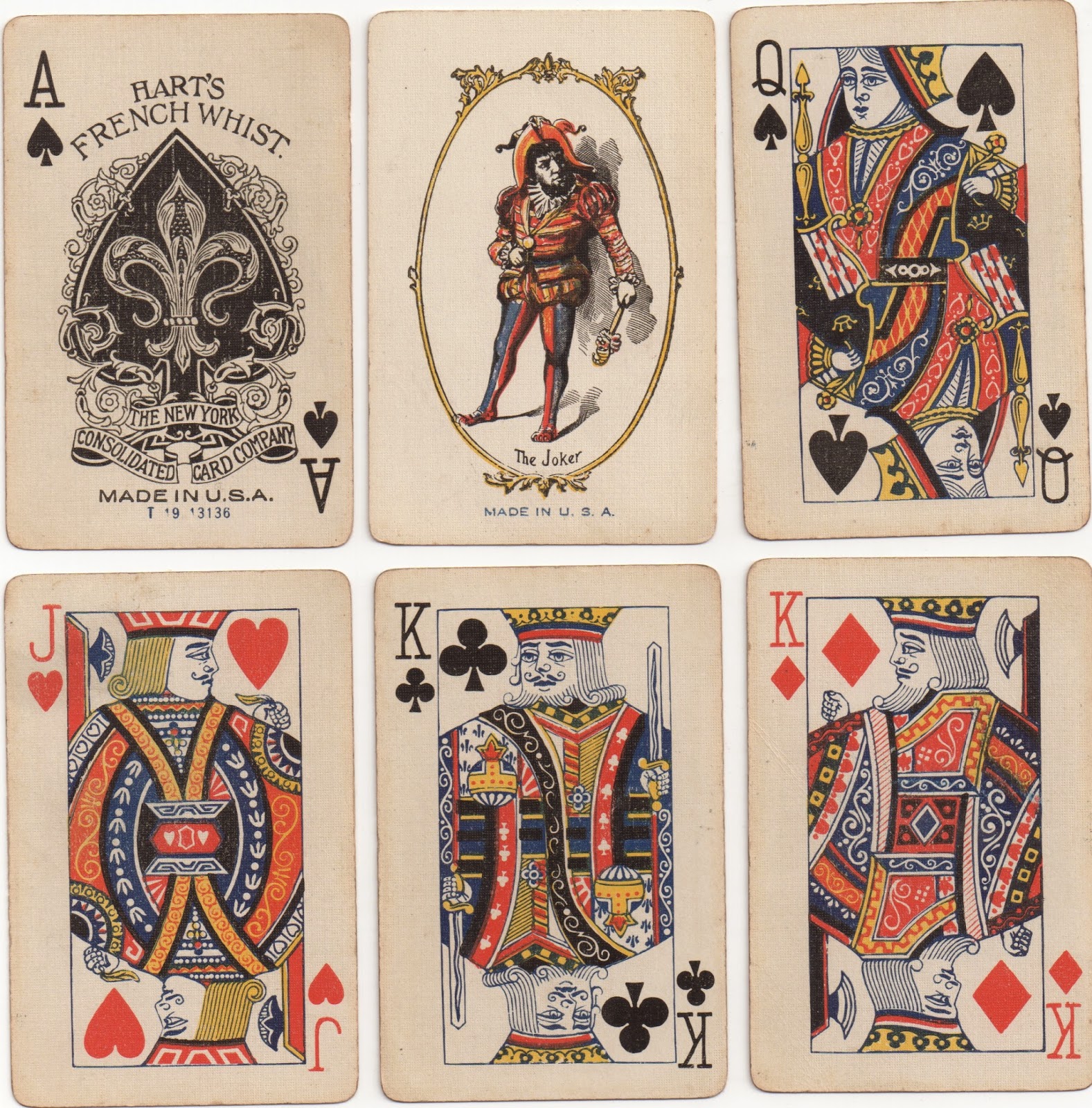 These courts do not seem to have been used for very long and the post-WWI De Luxe and Bee Bridge Whist 68 had totally different courts, which are reminiscent of those of the Swiss maker, Müller. 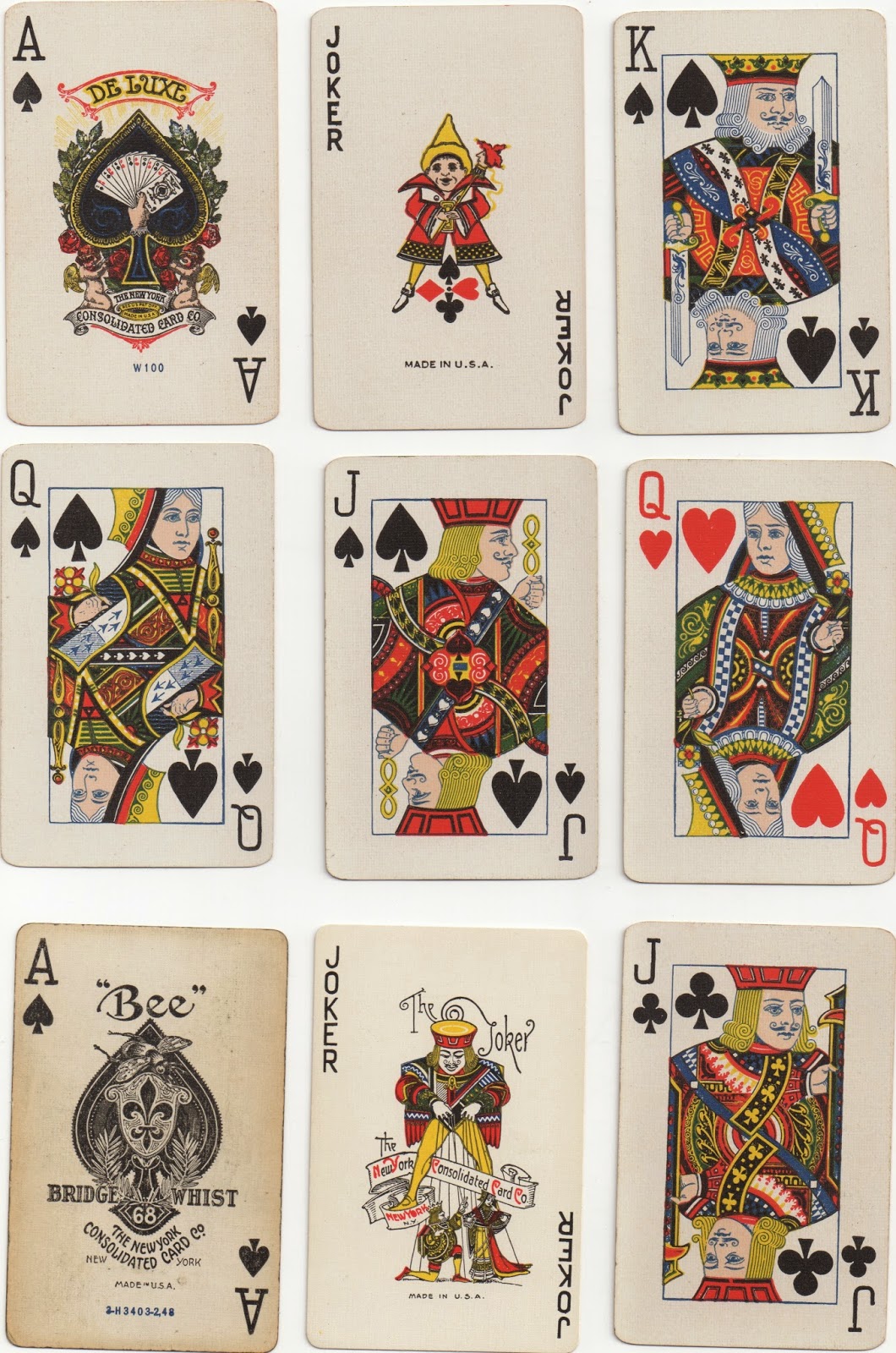 After the establishment of Consolidated-Dougherty these designs seem to disappear. For a full list of my NYCC packs including those of the earlier constituent makers, click here►:

At some stage in the early 20th century (or possibly a little earlier, as I've seen an indexless version) US6.1 was taken as the basis for a redrawing in a different style, US7. This was to become the American poker court set from c.1960 onwards. 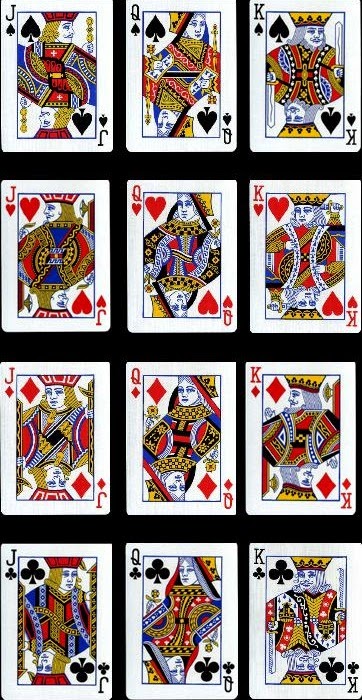 Most copies of American poker cards, such as those made in China, use this design or some slight variant of it. It has also become the basis for the weird and wonderful limited editions with odd colours, pink backgrounds, green backgrounds, no heads (for the French Revolution!!), skeletal heads, and so on. There is a large index version by USPCC in which the design has been compressed, so that elements of it have been moved closer together or they overlap. 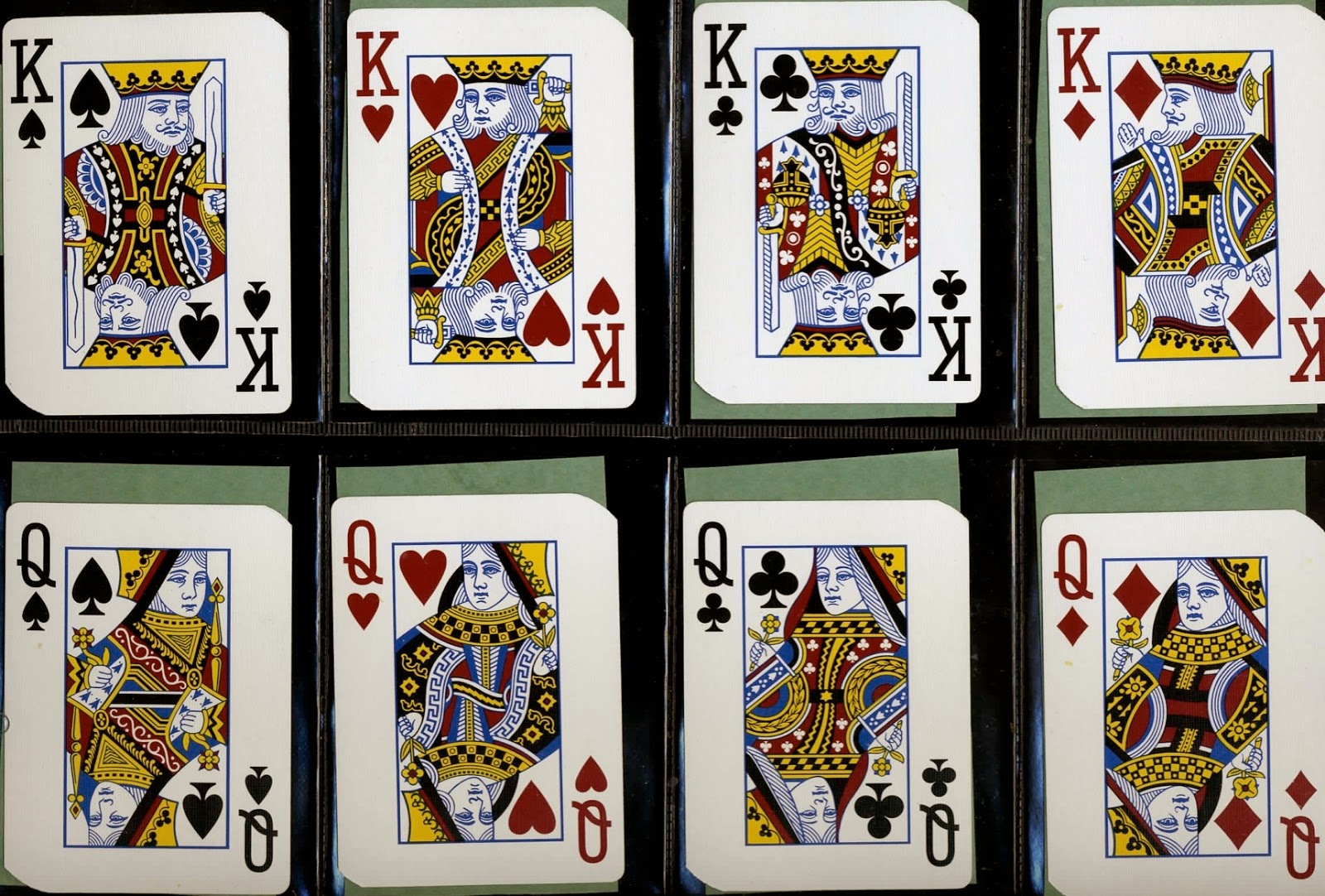 USPCC has always been in the market for absorbing its competitors, as can be seen from the brief outline above. Other firms also went into the pot: Dougherty (1907), Pyramid (1925), Russell (1929) to mention a few. More recently, USPCC has absorbed even more of its competitors, for example Arrco and Kem, many of which continue to operate with their own names, though I don't know what has happened to their original court card designs. One firm, though, has not been mentioned yet, but should be, as it was another of the constituent firms of USPCC: Standard Playing Card Co. of Chicago. It also had its own courts, which were supplanted later by US4. Two sizes are known, both wide. 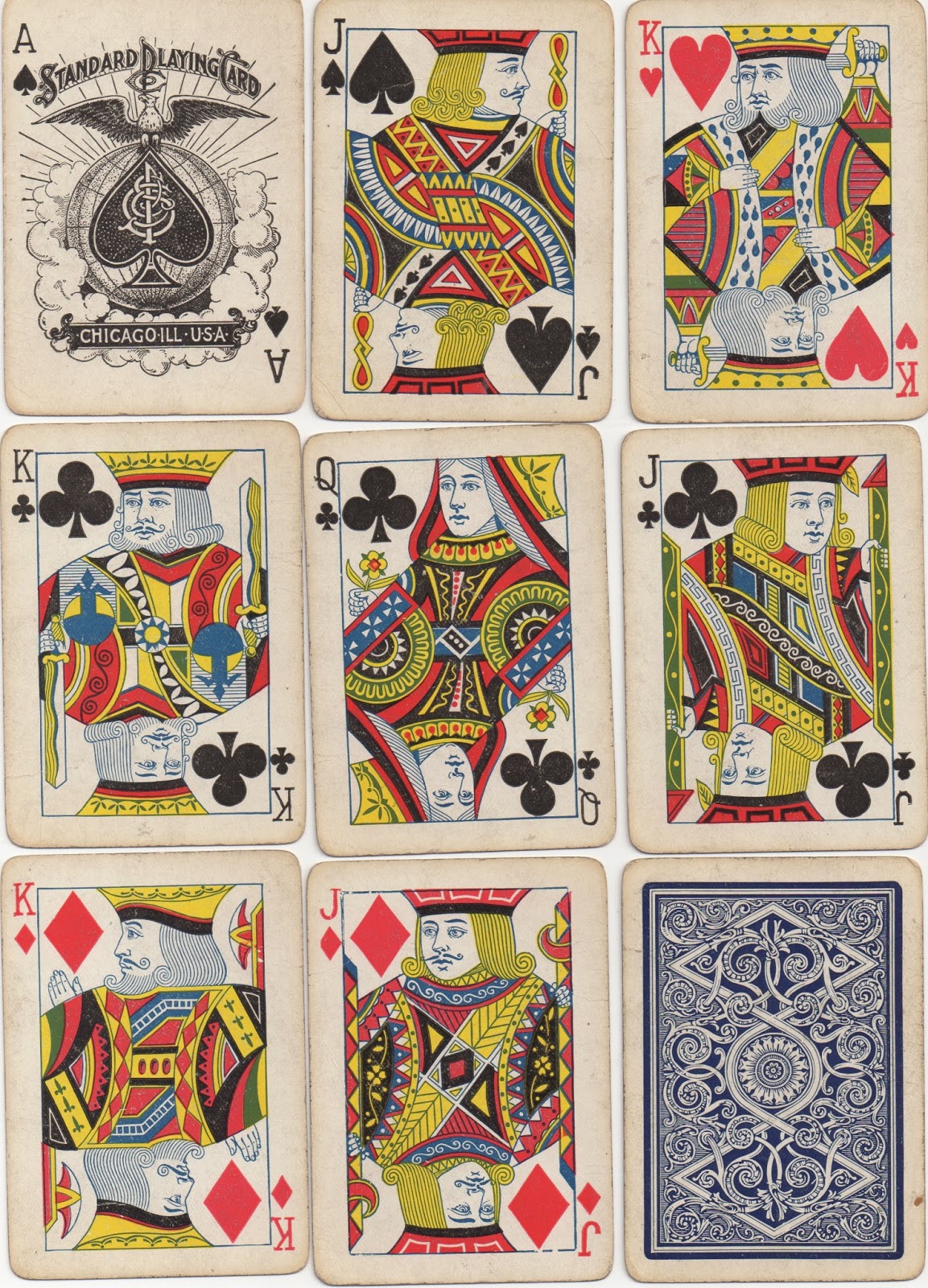 Above: Smaller version from a pack made for Parker Brothers named Rembrandt, c.1900

Incidentally, the larger of the two versions has recently been revived by Legends Playing Card Co. in their Serpentine brand with a decorative AD.