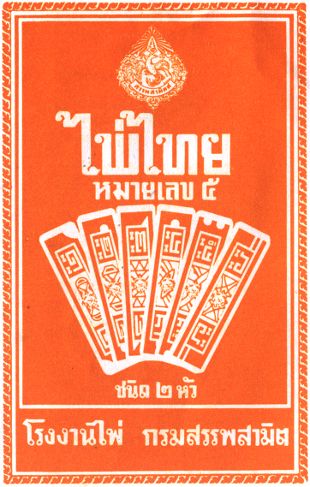 Thailand's Playing Cards Manufacturing Factory remains under the Finance Ministry's remit, a state enterprise that traces its roots back more than 70 years, when authorities considered the production of playing cards important enough to national security for the state to take a direct role. The factory in Bangkok produces over 400,000 decks of cards per month. Its cards are sold nationwide under brand names such as “Lucky 555”, “Vegas Gold-111”, “Vegas V.G. Silver 222”, “V.G. 333” and “Winner No. 02”, no doubt appealing to gamblers hoping to hit a hot streak on the tables. The bulk of the factory's work is traditional Thai and Chinese cards, including pai jeen si see (four-coloured Chinese cards) and the thin, rectangular pai.

Above: Thai 'Pai' playing cards, made by the Playing Cards Manufacturing Factory, Bangkok, Thailand. Packs are shipped wholesale in packets of eight decks; the label shown right is from the outer wrapper. The image shown below is a detail from the security seal from the outer wrapper, showing the factory logo and some text overprinted in red.   [Click on images to zoom.] 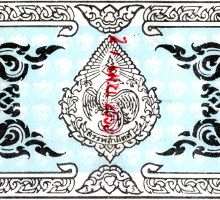 Although the factory in Bangkok produces over 400,000 decks per month, the playing card market is led by global players such as Japan's Angel Playing Cards and Belgium's Carta Mundi, both of which can produce cards at prices lower than the Thai enterprise thanks to better technology and scale. Card playing is regulated under the law to outfits playing traditional Thai and Chinese games, poker or rummy, although illegal casinos flourish despite sporadic police crackdowns. Illegal gambling dens more often than not use Chinese-manufactured cards smuggled into the country, although locally produced cards are readily available at corner shops and kiosks. To a novice, it seems incomprehensible that demand is so high for playing cards. But gamblers are a suspicious lot and often demand changes of the deck after just one or two bad hands or after spotting even the slightest imperfections that could be used to tip off a savvy opponent.

The factory's traditional Thai and Chinese cards still sell well, with growth of 4-5% per year and demand of about 300,000 decks per month, or three-quarters of total production. Card sales are quite separate from the economic cycle. Even at the worst of the economic crisis, sales continue to stay steady, with most cards sold during the New Year and Chinese New Year holidays. The factory has branched out in recent years to printing booklets, brochures and cards. Download The Playing Card Factory Brochure (PDF, 6MB). 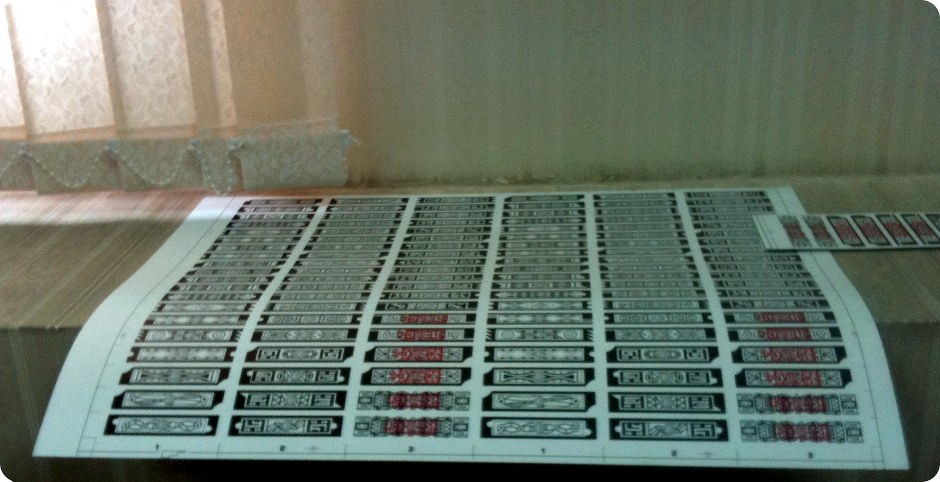 Above: uncut sheet of Thai Pai playing cards, made by the Playing Cards Manufacturing Factory in Bangkok, 2012

Although gambling is illegal in Thailand and playing cards are supposed to be controlled, these cards are available at corner shops and kiosks everywhere. 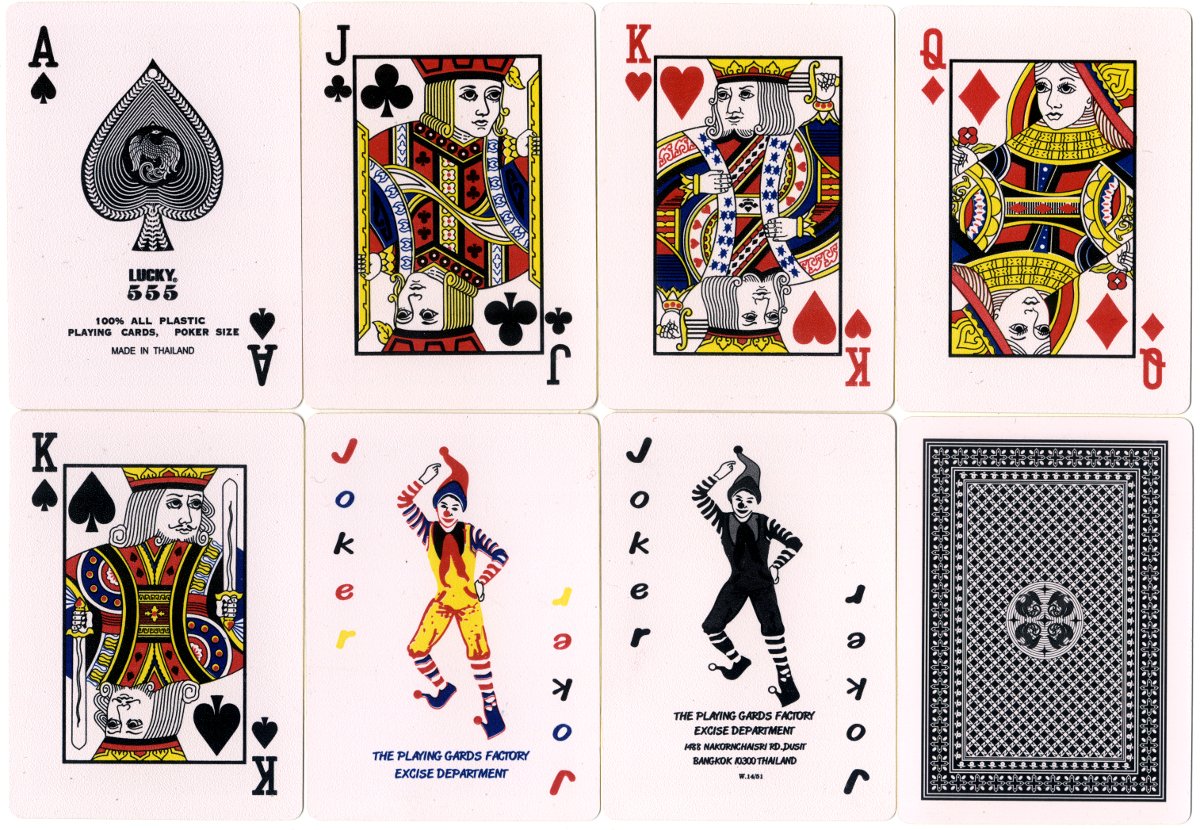 The court cards are copies of Goodall's designs. See:

Above: 'Lucky 555' 100% all plastic poker size playing cards, with gold edges, made by the Playing Cards Manufacturing Factory, Bangkok, Thailand. The Ace of Spades has the Manufacturing Company logo in the centre, and the 2 Jokers and the outside box carry the inscription "The Playing Cards Factory Excise Department" which refers to the Playing Card factory being part of Thailand's Finance Ministry. The cards are presented in a plastic case sealed with a security seal, inside a cardboard outer sleeve/box. The joker has a production code ‘W.14/51’.

Above: 'Lucky Gold 555' with gold edges, a slightly different edition to the above deck, made by the Playing Cards Manufacturing Factory, Bangkok, Thailand.

Above: 'Winner 02' made by the Playing Cards Manufacturing Factory, Bangkok, Thailand. The joker has a production code ‘W.34/51’. Courtesy Matt Probert.

Above: Thai Airlines playing cards promoting the Airbus A380, manufactured by The Playing Cards Factory, Excise Department, Bangkok. The Ace of Spades is decorated with scroll work and the legend 'Made in Thailand' while the airline's logo appears on the two Jokers. 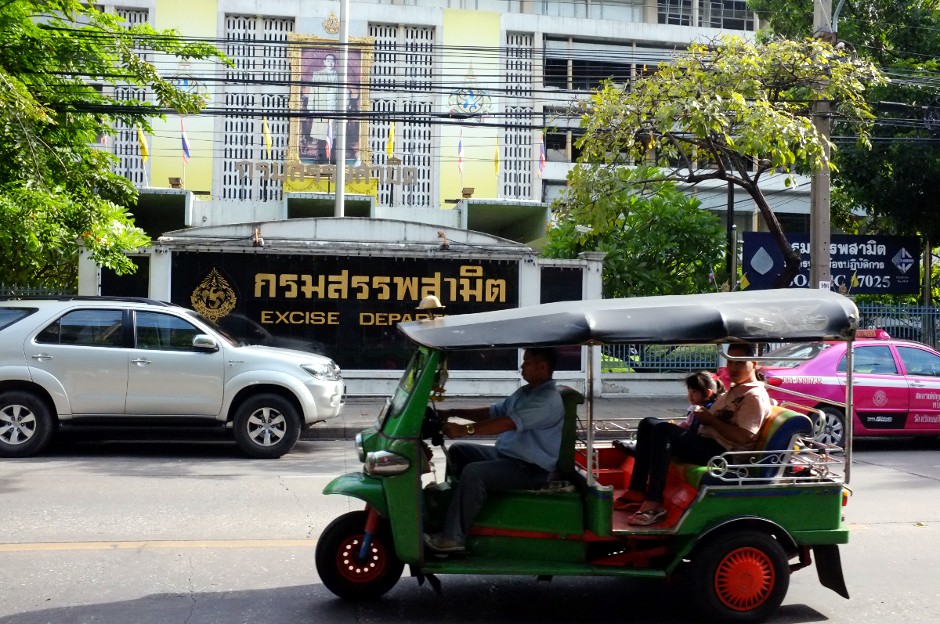 Following a visit to the Factory:   "It was quite fun and a good experience. Everything was very secure, with about 20 soldiers guarding everything. We walked through the factory, so I saw the printers and many workers checking cards and putting them in boxes, but I wasn't allowed to take any photos at all. When we were waiting for the manager I did manage to take one photo on my phone, its of an uncut sheet of the Thai cards; but its a little blurry. The best pack he showed us was for Thai Airways, but he wouldn't let me have the whole pack, just two aces and three jokers. There's also a pack from the bridge championship which was held in Bangkok; they have a special barcode on each card so a machine could deal out the cards during the championship (so nobody could cheat)."

"To use their services we'd have to go through a very cumbersome process of getting approval from the government before we can place an order, and we can only make a minimum order of 10,000 packs (4.1 tons), and he was not willing to negotiate a price for less than 10,000 packs. If we were to order that amount the load would also have to immediately be escorted by soldiers to customs at the airport, because they're illegal to be sold in Thailand (even though they're sold on every street corner and in every convenience shop, but he didn't know anything about that)." 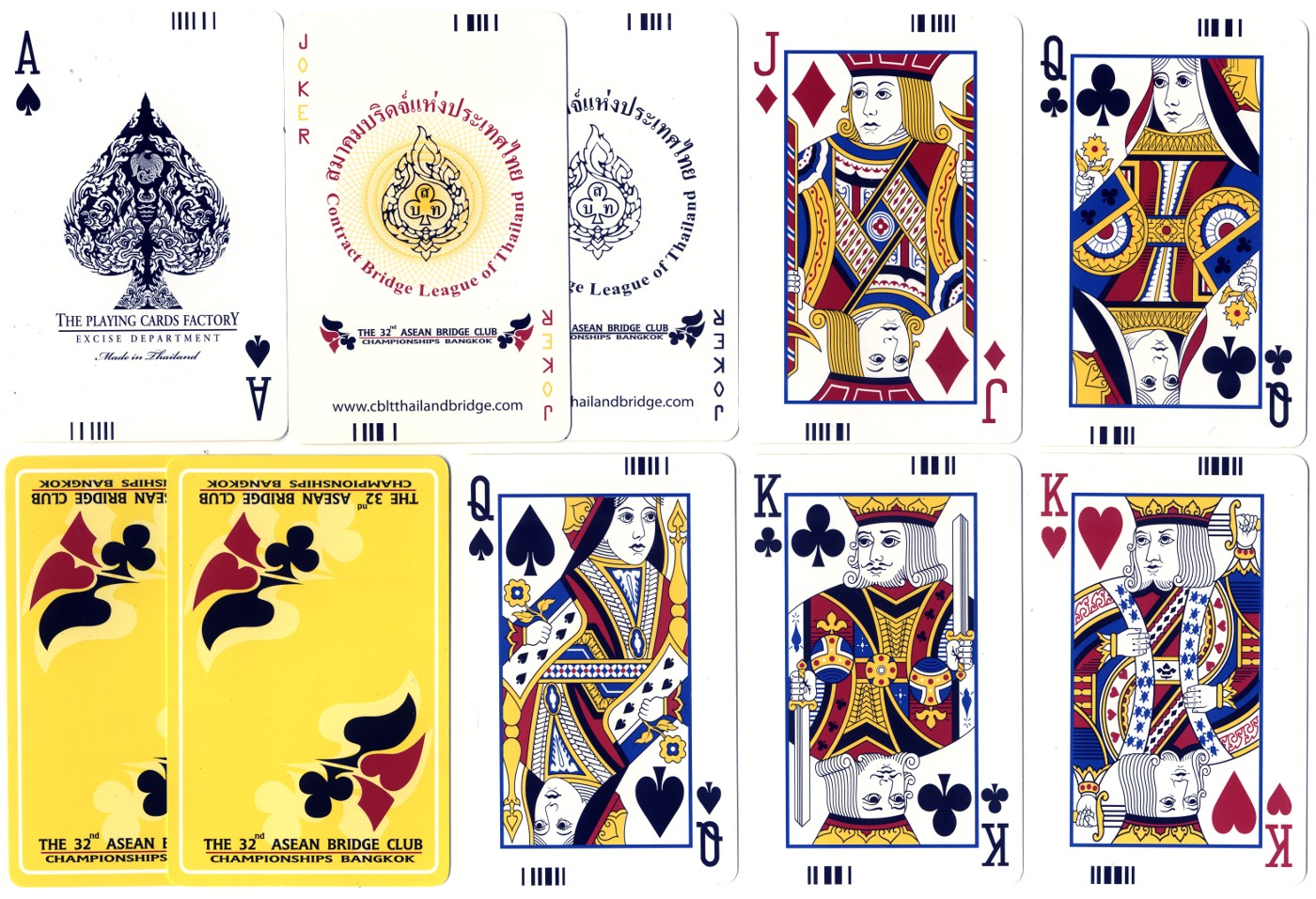 The court cards are copies of Goodall's designs. See:

Above: cards specially printed for the 32nd Asean Bridge Club Championships (Bangkok, 2010), with special barcodes on each card so a machine could deal the cards and eliminate the possibility of cheating. The court cards have been squeezed into the narrower format.