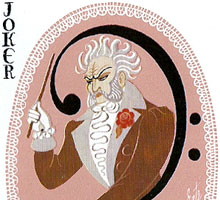 This outstanding and elaborate deck designed by Erté (Roman Tyrtov), the Russian-born Art Deco designer, was commissioned by Dunhill of London based on the theme of “La Traviata”. The court cards with French indices are reversible. That is to say that when turned end for end, a different picture is seen. Sometimes the difference is very obvious, other times it is more subtle. Erté’s real name was Romain De Tirtoff and he lived from 1892 to 1990. A major turning point in his career came in 1965, when he met Eric and Salome Estorick, the founders of Seven Arts Ltd of New York and London. Seven Arts produced this pack, and remained the exclusive agent for Erte's work until his death.

Above: “La Traviata” playing cards designed by Erté, manufactured by Carta Mundi, c.1985. The title card gives a copyright notice by Seven Arts, London. There is a pamphlet that opens up to 14 pages describing not only every card in the deck but also that the suits cover various Acts and Scenes from the opera. The pamphlet also explains that “When the 54 cards (four suits and two Jokers) are arranged numerically and by suit, highlights from the opera unfold chronologically”. Double set in elaborate luxury box with gold decorations, 2x52+2J, gold-edged, leaflet. Images courtesy Rod Starling.