RCI Playing-cards was a major player in the advertising speciality industry in the USA during the second half of the 20th century. The cards were manufactured by RC Printing Inc. (Rapid Copy Printing), a company based in Minneapolis, MN. This business was founded in circa 1960 by three brothers: Tom, Bob and John Sicora, each of whom owned 30% of the company with the remaining 10% being owned by Harlo Thill, a local business man. RC Printing was a general printer but formed a separate division to produce and market promotional playing cards known as RCI (RC International). 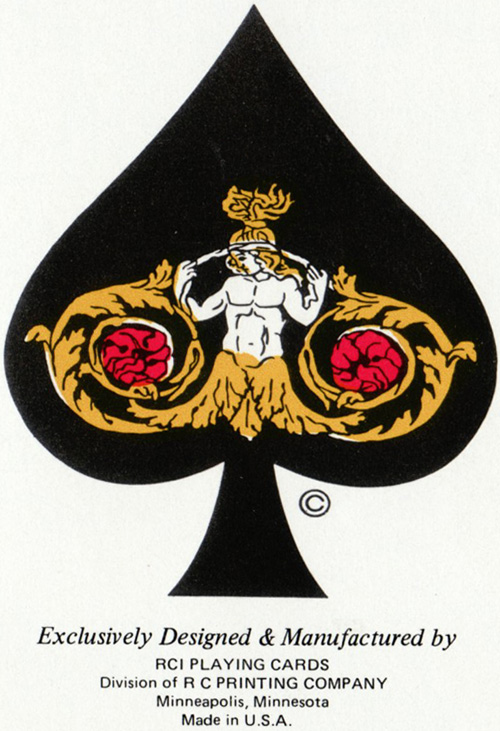 Based on a copyright date shown on the joker and the ace of spades, it can be assumed that playing-card production began in 1969. The printing works for the company’s general printing and playing card manufacture was situated in Golden Valley, a western suburb of Minneapolis. Playing-card production was aimed at the lucrative promotional products industry and RCI soon became an important player in that field. Customers included Ozark Airlines, the American Contract Bridge League, Chesapeake & Ohio Railway et al. Some packs were printed for the European market as evidenced by the use of French and British English spelling on packs made for Michelin, the French tire/tyre manufacturer. Briefly RCI entered the retail market for playing cards by an association with the National Football League having obtained the properties license to print their cards. Known copies of these pack are standard RCI decks with no special NFL jokers or ace of spades. However, the Sicora brothers did not like the need to maintain a stock of retail cards in anticipation of sales rather than the situation for those packs manufactured to order for promotional contracts that were sent out when the order was completed, and they did not pursue retail sales.

The court card designs are based on the standard Anglo-American pattern, as shown below. The colour palette for these cards is ochre, black and shades of red with uncoloured faces. Two versions of the ace of spades and joker are known that differ only in the presence or absence of 1969 after the © mark. The ace of spades is ornate for the era and shows a youth from classical Greek antiquity tying a ribbon around his head. This appears to be a representation of the Diadumenos or ‘Diadem Bearer’ (the winner of an athletic contest), sculpted by Polyclitus in 10 BC – perhaps appropriate for the highest value playing card in the pack for many games or an expression of the quality of the cards. 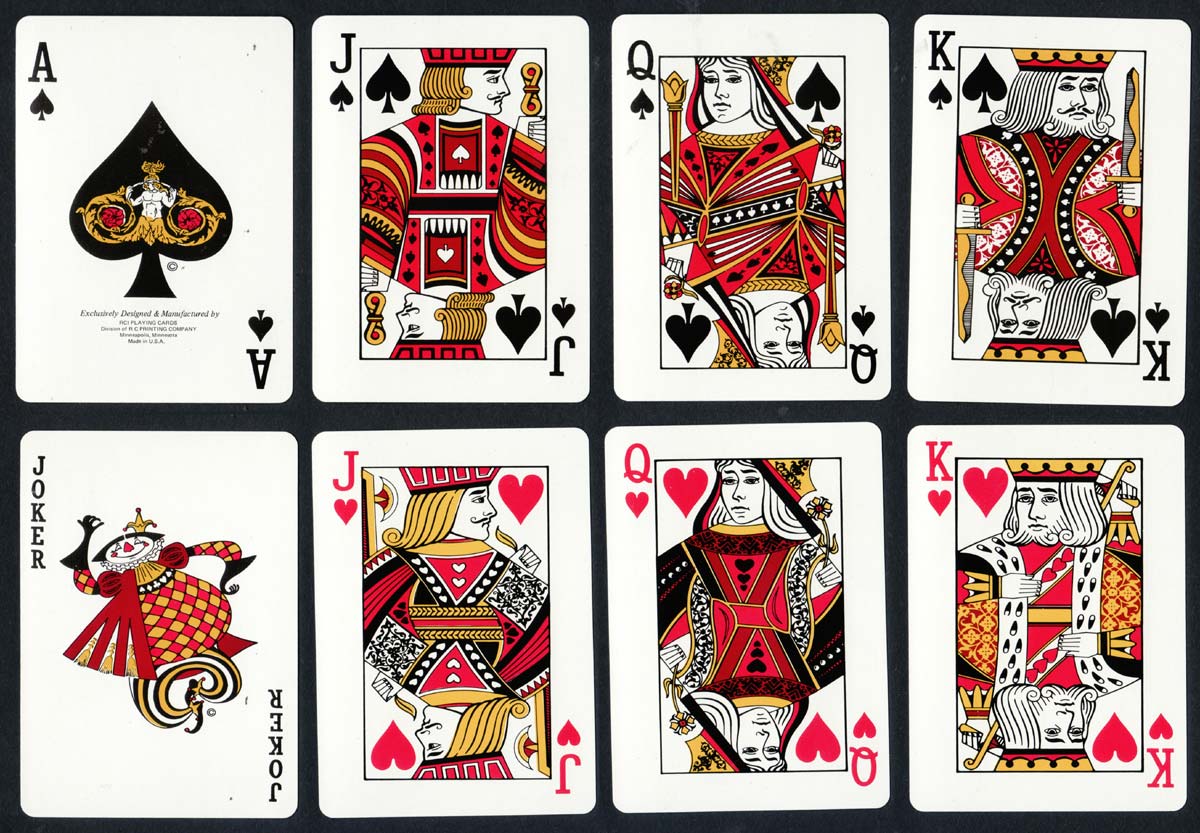 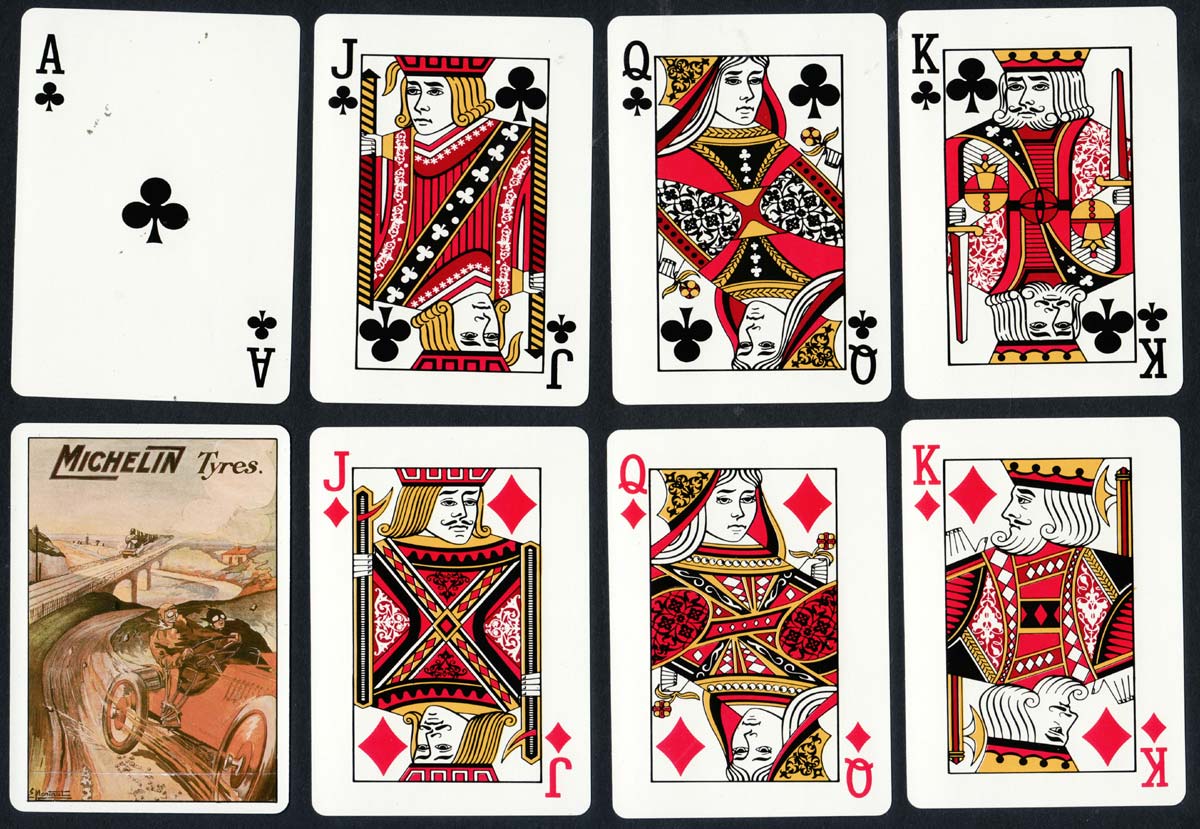 Above: court cards, ace of spades and joker from an RCI pack made for Michelin, with the back showing a speeding car outrunning a train. 52 cards+ 2 jokers in box, c.1980. Possibly for the UK market since the French word for Tyres is 'pneus' whilst the American spelling is 'tires'.

Mr Dennis McAnally joined the company from TDC Inc., in late 1978 as Playing-Card Sales Manager. At that time playing-card volume was less than $60,000 per year which, given equipment available, was underperforming in the light of the growth potential present in the playing-card market. When he left the company in 1983, he was succeeded by Susan Tobias.

RC Printing was purchased by Daily Printing Inc., of Plymouth, MN around 1985 and playing-card making ceased. The equipment for playing-card manufacture was sold to George C Matteson Inc., the maker of Gemaco playing-cards.

* Dennis McAnally and Susan Tobias are former employees of RCI