The origin of Poker - arguably the most influential card game of all time - is actually quite unclear. Most scholars agree that the origin of modern Poker is several different card games, which evolved into what we now recognize as Poker. One of the most popular theories is that Poker developed from the French game of ‘Poque’, but that might be overly simplifying matters.

Long before the invention of Internet casinos, Germans were playing ‘pochspiel’, a game that dates back at least 500 years and is still played today. Although both Poque and Pochspiel are quite different from modern Poker, there are also many similarities that can’t be entirely overlooked. If you consider all of the modern forms of poker, which include everything from Texas Holdem to 7-Card Stud and Five Card Draw, it is easy to believe that card games evolve continuously. Just look at a common Internet poker guide.

When it comes to poker in America, we know more about the history and there is less reason to speculate. It’s more or less common knowledge that poker was played on steamboats trafficking the Mississippi River. As early as 1829, an English actor by the name of Joseph Crowell described a game that was played in New Orleans, in which players were betting on who held the best hand. This form of poker, however, was played with a 20-card deck.

Thanks to the Mississippi steamboats, the game was able to spread rapidly across other states. At the time, gambling was a popular and common pastime in the United States, and settlers moving west were quick to adopt the game. After a while, the 20-card deck was replaced with the English 52-card deck, which contained suits, and thus the ‘flush’ was born.

In the early 1910s, gambling was made illegal in the state of Nevada, but the state found it nigh on impossible to control the incredibly popular card game that poker had become. Poker was recognized as a skill game by the attorney general, although an exception was made for Stud poker, which was still legally regarded as a game of chance.

Once gambling was legalized in Nevada the rest is, as they say, history. Poker moved in to the Casinos and could continue to evolve and be enjoyed by the masses. Tournament poker, which is the most popular form of the game today and generates massive amounts of gambling articles worldwide, is another story. It became increasingly popular after 1970, when the first World Series of Poker was played.

Four of Clubs: “The Devil’s Bedpost”. For some reason this is considered to be an unlucky card and it is said that the player who turns it up is “always considered as cut off from all chances of winning the game”.

Wikipedia: Gambling in the United States

This American cartoon about two men in a poker club was published in the Columbia Spectator between 1880 and 1882. 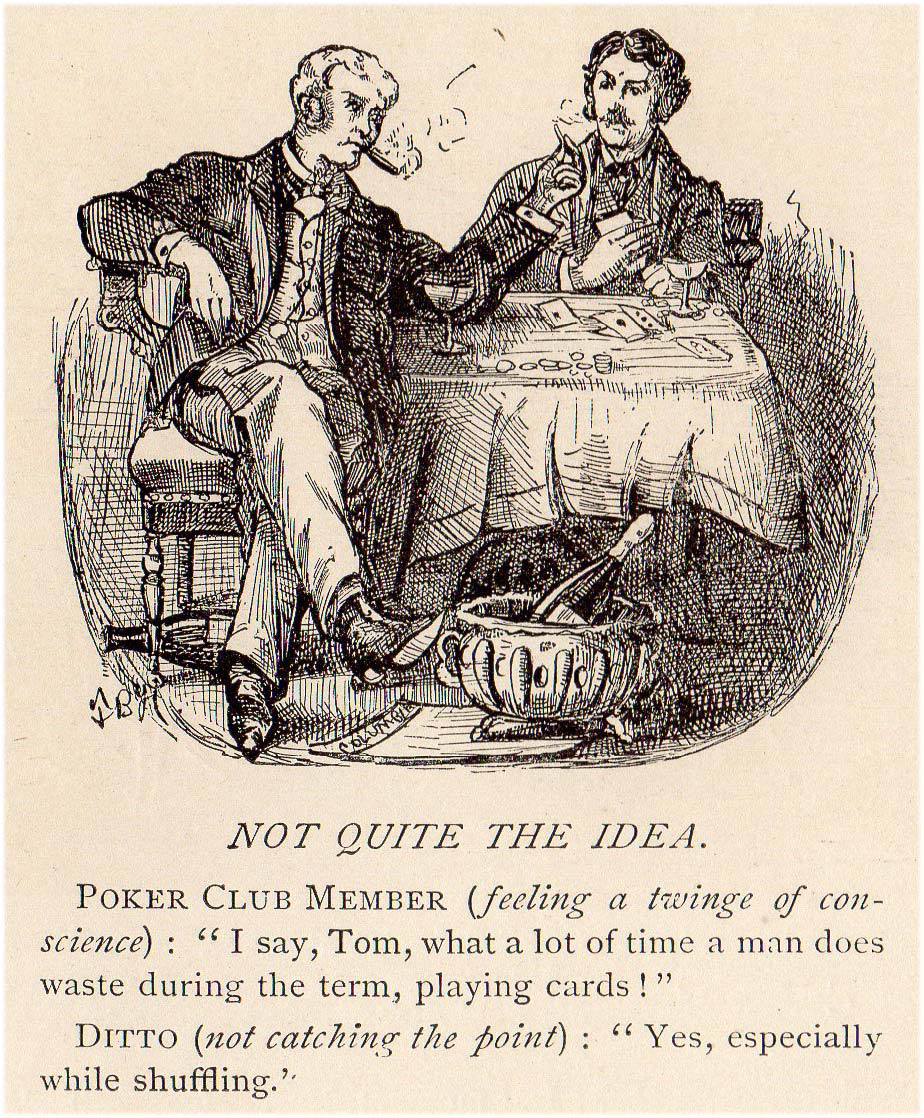 Above: cartoon published in the Columbia Spectator between 1880 and 1882. courtesy Matt Probert.