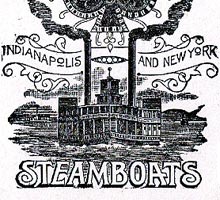 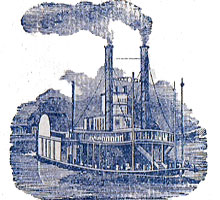 Owing to the romantic appeal of gambling on the Mississippi river, from the 1870s onwards many American playing card manufacturers added “Steamboats” to their range, differentiated by a number, such as 99 or 999. There do not appear to have been any copyright restrictions or patent laws covering the use of the name “Steamboats” as various manufacturers had this brand in their range. This is not the case with other brands such as “Bicycle” or “Bee”. “Steamboats” tended to be the cheaper end of the range, often but not always produced in a rudimentary quality. The theme of steamboats navigating up and down the Mississippi also extended to the cotton plantations alongside the river and to African American people employed therein who were sometimes depicted on the special Joker card. Times have changed and these cards are now documentary evidence of a past era of history.

Above: Steamboat No.999 produced by Russell & Morgan Co., Cincinnati, USA, c.1883. This was the cheapest deck they offered for sale and in this instance only two colours were used on the court cards to keep the printing costs to a minimum   more →

Above: a slightly later edition of 'Steamboat No.999' playing cards produced in three colours by the United States Printing Co (Russell & Morgan Factories), Cincinnati, USA, c.1891. The Ace of Spades now has the number 999 but not the title “Steamboat” although the image of a steamboat is evoked.

Above: Superior Steamboats No.9, National Card Co, c.1885. Although the Steamboats brand was the bottom of the line quality-wise with all makers, this particular deck is gold edged!   more →

Above: 'Steamboats No.99' playing cards produced by the American Playing Card Co. of Kalamazoo, c.1890. The Ace of Spades is rather patriotic and the court cards appear to be based on the earlier designs of Russell & Morgan (U.S.P.C.C.)   more →

Above: Steamboats #66 playing cards manufactured by the Kalamazoo Paper Box & Card Co., c.1903. The Joker in this deck depicts an able seaman standing in front of a cleat   more →

As a final souvenir from that bygone era, this deck also relates to the cotton plantations that were located in the States through which the steamboats travelled on their voyages up and down the Mississippi River. 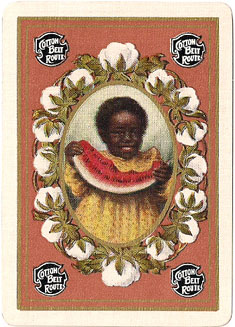 Above: this Cotton route deck published in 1903 by St. Louis Southwestern Railway Lines is a standard deck with advertising only on the box, back design and coordinated Joker. Accordingly, the deck was used for regular play. To find a specimen in excellent or mint condition is therefore a rarity. This specimen is gold edged.

It was the romantic mystique surrounding the gambling that regularly took place on the Steamboats and the folklore that built up around legendary Mississippi gamblers that card makers exploited in this very popular brand of playing cards. The evocation of the life in the steamboat era provides a melancholy reminiscence of that bygone age.