The first packs produced by John Waddington Ltd were printed by direct lithography with images transferred by hand onto stone. However, at this time, direct lithography was changing over to offset lithography and the plates of the early court cards were frequently re-drawn and differences in the outlines and colouring can be detected in different editions. 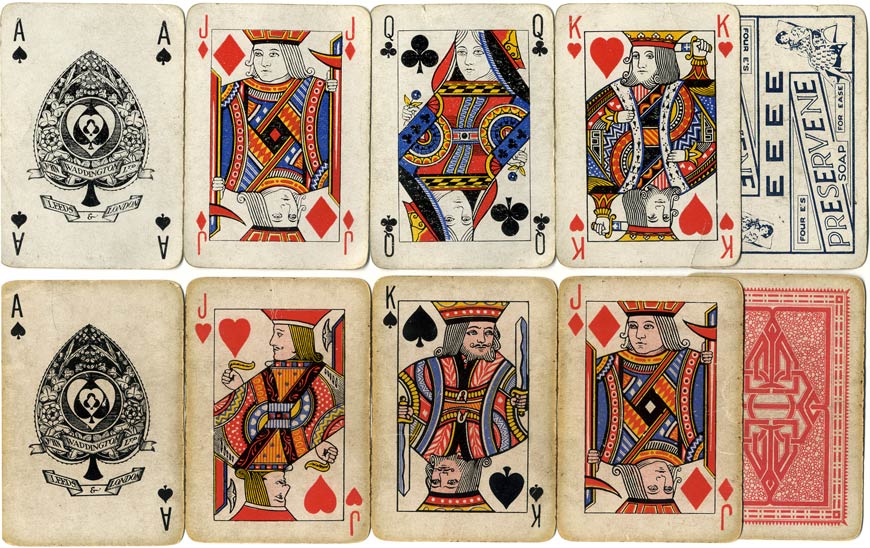 Above: two examples of early packs manufactured by John Waddington Ltd, c.1922-24, showing the early court card designs. The upper example has four indices and plain white faces with an advertising reverse for Preservine Soap. The lower example, with a geometric pattern on the reverse, has two indices and the faces and hands are coloured pink. These court cards were soon re-designed. 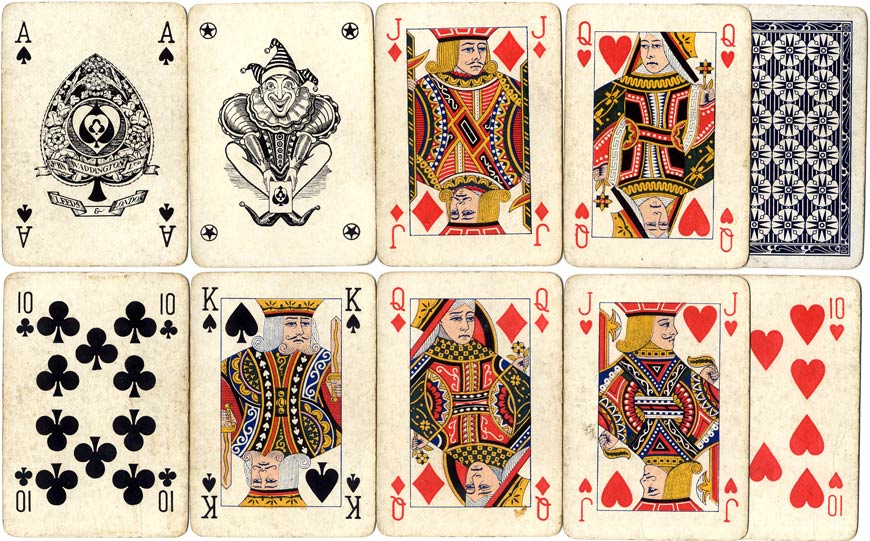 Above: the early Ace of Spades continued to be used with a new version of the court cards for a few more years, with slightly different types of indices, until it was replaced with an updated design. The new designs were submitted to the board for approval in 1924; they are based on USPCC’s US3 design. The printing plates of these early court cards frequently wore out and were re-drawn so that slight differences in the outlines and colouring can be detected in different editions. See also: Ascot • Twillese • London Palladium, c.1925. 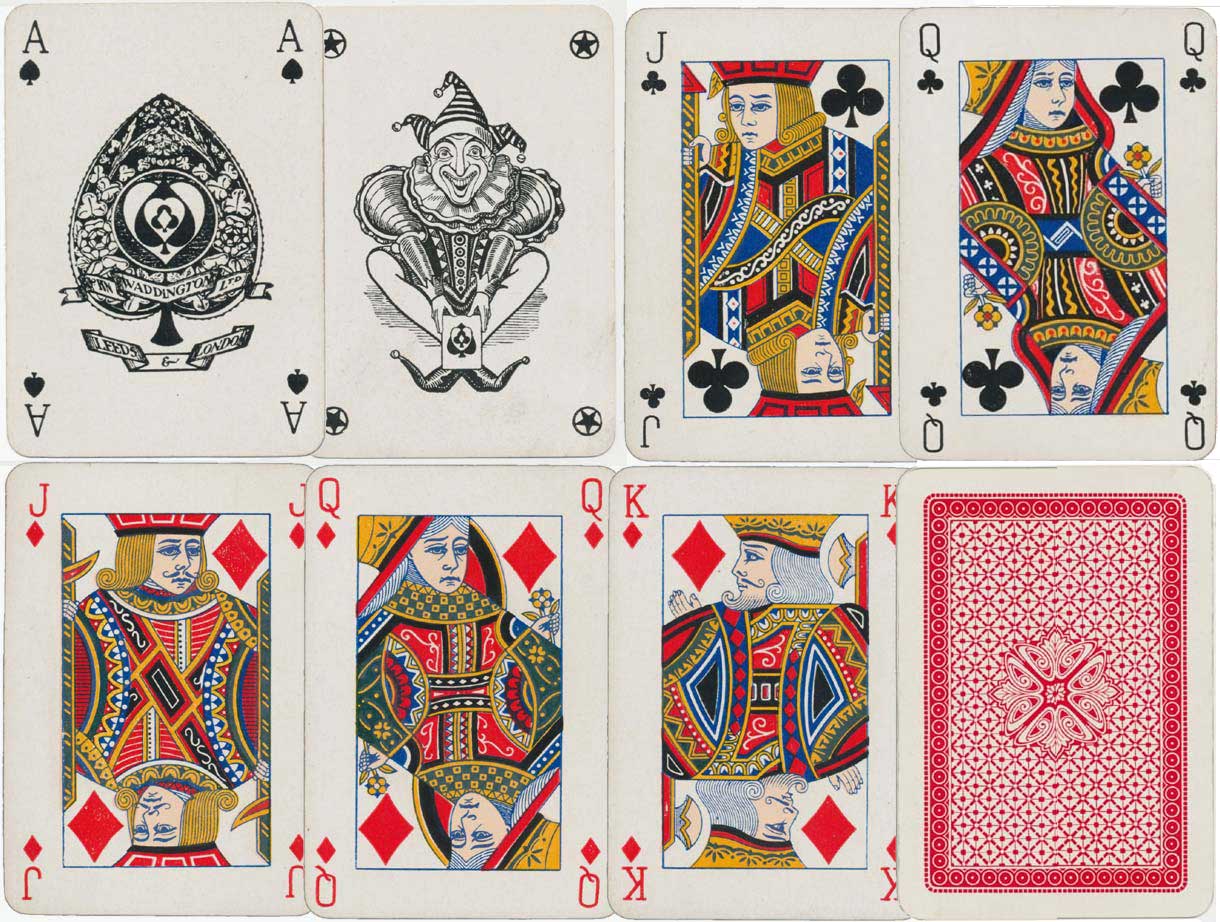 Above: the early Ace of Spades and joker with new courts and slightly smaller indices, c.1925-35. See a later edition here→

Above: an anonymous Ace of Spades with an elaborate design was also used by John Waddington Ltd around this time (c.1925) for packs with pictorial backs or for advertising packs. The above specimen has gold edges and depicts a hunting scene on the reverse. The box is titled "Hunting". This back design appears in Waddington's 1933 Trade Brochure 'Sporting' Series.

Above; wide-sized advertising deck for Black and White Scotch Whisky by Waddingtons, c.1928-30. The extra card is a nice bit of social history! Courtesy Matt Probert. 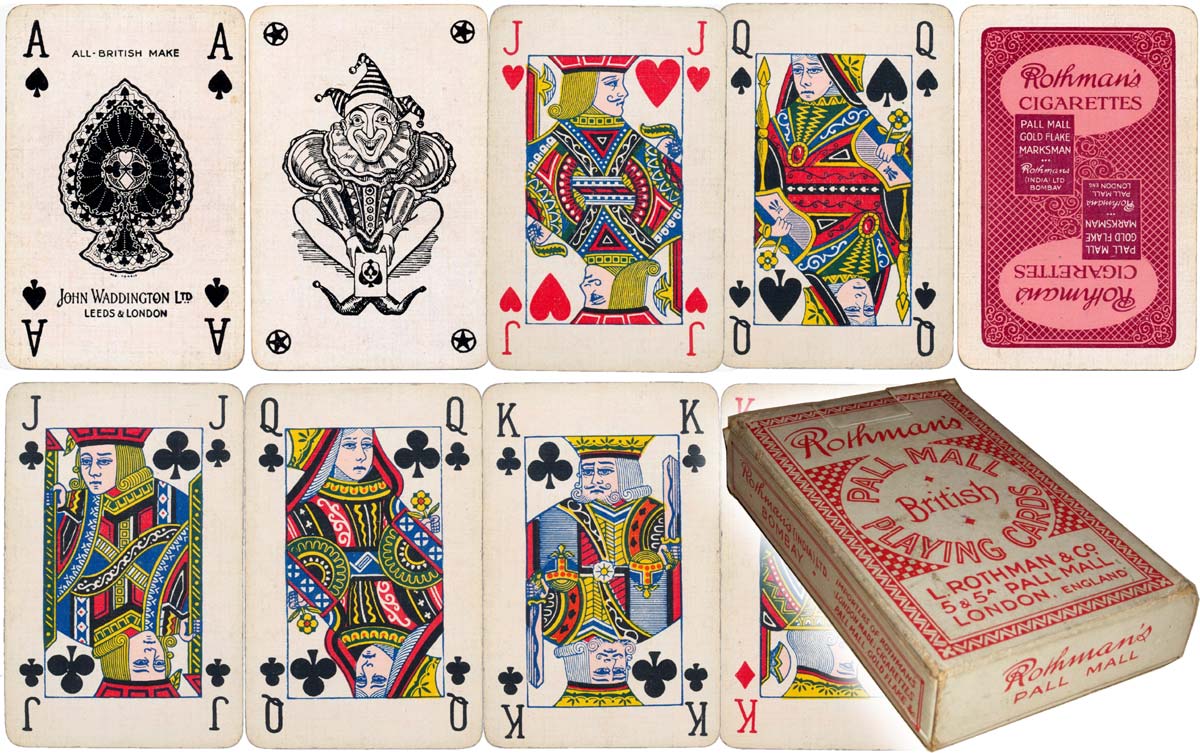 Above: the newly registered ace of spades first appeared in c.1925. This pack for Rothman's cigarettes dates from c.1926. Images courtesy Matt Probert.