Right: an advertising card counter that was distributed to promote the 'Bicycle' brand →

The famous ‘Bicycle’ playing cards were first introduced by Russell & Morgan Printing Co in 1885. This was the time of the high-wheeled bicycles and, because they were newer and faster than high-wheeled carts, the name ‘Bicycle’ was chosen for the new brand. They were hugely successful and became the most well-known brand in the world. A total of 82 different back designs were issued over the years, featuring bicycles, motorcycles or automobile motifs, and for very short periods, bi-planes or warships. Similarly, a number of different bicycle-themed Jokers have accompanied decks over the years and the early editions are now very scarce and sought by collectors. 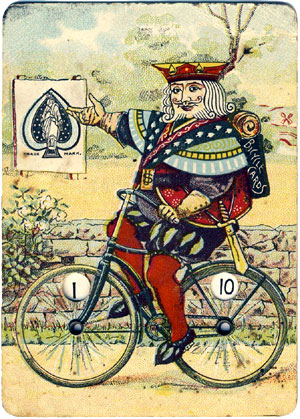 Above: the first edition of Bicycle playing cards, including a “Best Bower” and issued with seven different back designs of which Lotus, the one shown here, was one. Printed by Russell & Morgan Printing Co., Cincinnati, 1885. See the Box. Image courtesy Rod Starling.

Above: the first Ace of Spades was used with Bicycle decks, printed by Russell & Morgan Printing Co., between 1885-c.1890. The same box was used for this edition and the one shown below. Images courtesy Rod Starling.

Above: this is the second Ace of Spades used with Bicycle decks, printed by Russell & Morgan Printing Co. c.1889. It has a bicycle wheel motif on the Ace, with the very early and rare Hi Wheeled Joker, as shown, with a Thistle back design and is gold edged. Thistle was issued in red and blue. This particular Thistle design was issued in 1891 and features a grass background. In 1899, the design was changed slightly to include a brick background. It was eventually discontinued in 1931. Note that neither the customary 'US' or 'Joker' inscriptions are present on the Joker. Subsequent editions came with different Jokers. Image courtesy Rod Starling.

Above: another early and rarer Lo-Wheel Joker and an Acorn back design which was issued in 1891 and discontinued in 1943. Acorn was issued in red, blue, brown and green. Image courtesy Rod Starling.

Above: as above, but with the rarer coloured Joker, c.1894. The box states ‘Bicycle Seconds’. Image courtesy Jesse Hobbs.

Above: Bicycle #808 deck printed by U.S.P.C. Co., at their Russell & Morgan factories, c.1895. The court cards have a slightly different design, as can be seen from the Queen of Diamonds. The back design is Racer No.1 which ran from 1895 to 1906. The Joker features a King wearing a Jester's hat, riding a bicycle past an '808' milestone. Click here to view the box. Image courtesy Rod Starling. 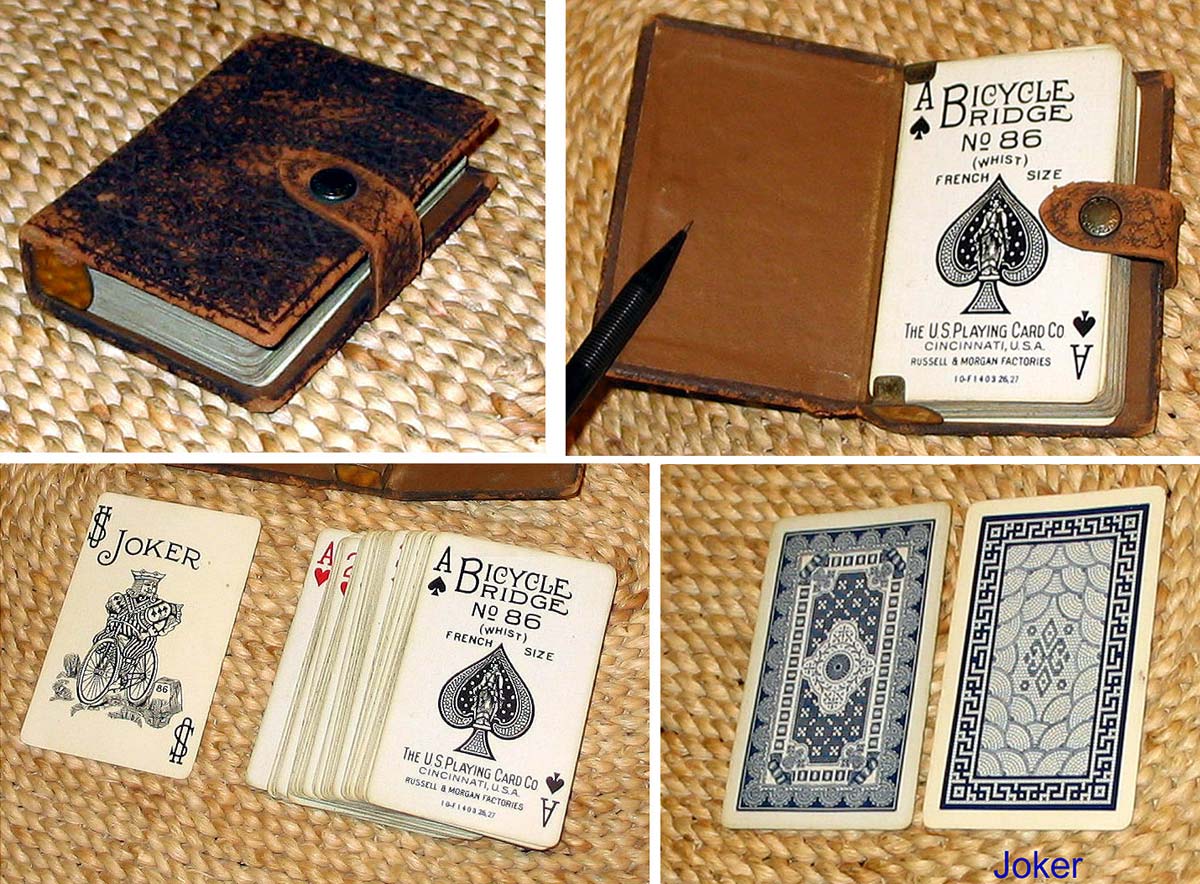 Above: Bicycle Bridge No.86 printed by U.S.P.C. Co. at their Russell & Morgan factories, c.1920. The deck is in the narrower French (Whist) size (2¼ x 3½ inches) and the first of a series of narrow decks produced by USPCC under their Bicycle brand. 52 cards + joker. Note that the joker has the number ‘86’ on the milestone but has a different back design in this example! Images courtesy Gino Hasler.

Above: A Braille 'Bicycle No.808' deck for the blind with the card indices embossed in Braille on each card, c.1924. 54 cards. Each card is embossed with its Braille representation of value and suit, including the two jokers. Unfortunately, the embossing goes right through the cards so that a sighted person can read the back of each card like any other marked pack. This is the more common of the early 'Bicycle' Aces of Spades and was used until at least 1925. The Joker depicts a 'King' riding a bicycle past an 808 milestone, similar to the trade card shown above.

Most standard packs manufactured by USPCC came with either red or blue backs. Some brands also came in green or brown, but these are relatively more scarce.

Above: assorted backs from 'Bicycle' playing cards, from a total of over 80 different designs, and a multi-coloured Joker.   more → 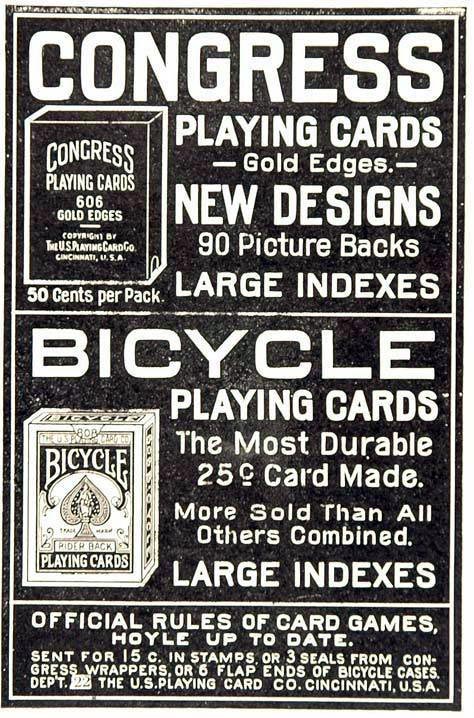