The book that Paul Bostock and I have recently published deals in detail with the analysis of wood-block courts (see here for details). So, I thought it might be helpful to explain my approach to cards printed by the later methods from metal plates or lithographic stones. The same approach can be applied to modern computer-based printing, where there is variation, as in Chinese versions of the English pattern. Some firms, on the other hand, such as Carta Mundi and Fournier, have such consistent print runs that no variation can be detected. That makes these designs much less interesting to me.

How to analyze and differentiate plates.

As I said on page 40, my interest in stamp variants led me to apply the same principles to playing cards. This is essentially the basis of my book The standard English pattern. The plates used by a maker may, in fact, be unrelated, as in the case of De La Rue’s first designs and their third one. Although the basic arrangement of the figure and his clothing is the same, so he is recognizable as belonging to the standard English pattern, the details of the plates, especially of the clothing are all very different. His attribute varies, too. D1 is idiosyncratic, anyway, and was part of an unpopular set of changes to the design; D2 follows the style of wood-block production, in particular that of Type III, the version used mainly by Reynolds in the 1830s, and D3 is a decorative version with the traditional components of the clothing being retained, but with more intricate details. The bottom of his tunic has a zigzag edge, there is an extra roundel on his sleeve at the left instead of a separate, plain coloured section, and small decorative spades on his back and sleeves, though they tend to loose their shape in the printing process.

On the other hand, makers often redrew their plates, probably when they were worn and could no longer be repaired, and certainly when a major functional change was to be incorporated, such as double-ending. This leads to a series of related designs, which clearly have a lot of characteristics in common. If we look at De La Rue’s later double-headed designs, we can see that they are derived from D3 in the first instance. The hairstyle is the same, the decorations on the shoulder straps and sleeve are, too. The panels on his tunic have been raised to be incorporated into the design at his waist. His hands have been turned round, turning his back into his chest. This is a common feature of many of the redrawn designs, which still persists today.

In D4.1 there is extra overlaid design on his chest, his hat has decoration on it (features found in D3) and the tunic panels are coloured differently. D5 has been redrawn, most noticeable on the head and hands, with dots added to the right-hand roundel and an extra black stripe on his waist-band; the kings and queens have different designs on their crowns, too. 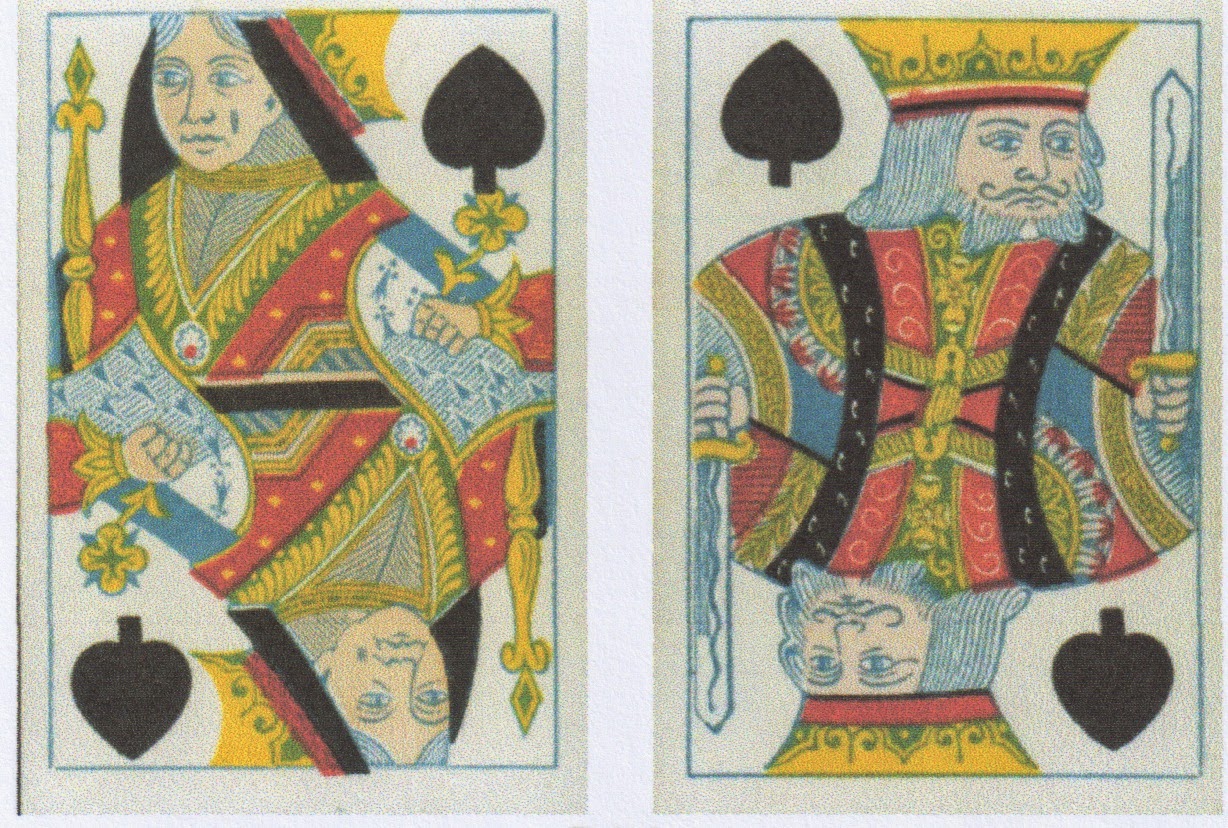 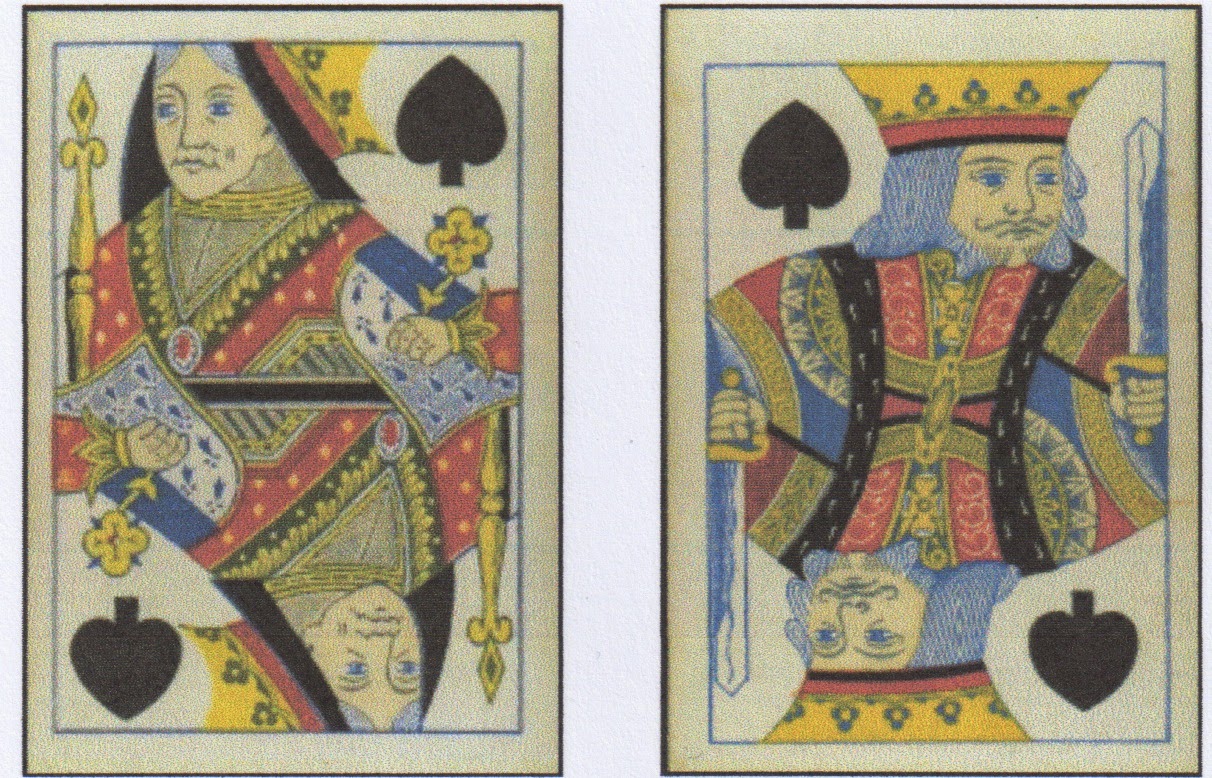 After the turning process the outline design of D6 was fixed for many years and used with different formats, including different colour schemes and indices. The particular clue to this long-term use can be found on the JC. There are two breaks in his cuff at one end (probably damage), which is a constant feature of all turned packs using a version of D6 from c.1875-1910.

Other variation in the courts of D6 can be found in particular on the KS and JD. The KS has three types of curlicue and the JD has two types of hat decoration. 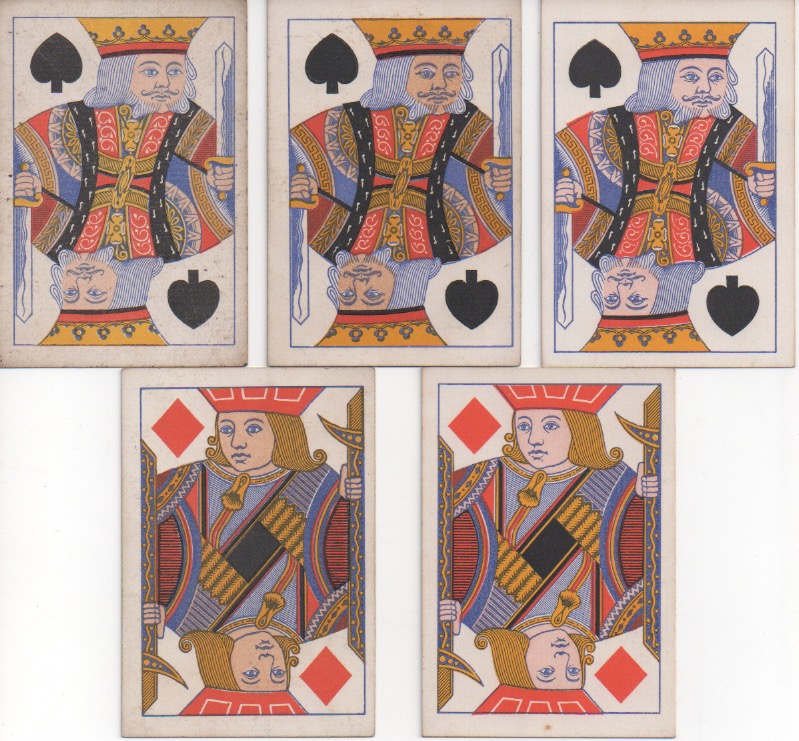 Above: KS (i) large, disjointed curlicues on chest, inherited from D5, (ii) small, disjointed curlicues, (iii) joined up curlicues. They seem to have been produced in the chronological order from left to right. Type (iii) continued until around 1910 when the four-colour version of D6 was phased out. The three-colour version and D6.1 used type (i). The white decoration on the right of the JD's hat is not parallel with the edge of the hat in earlier packs, whereas it is in later ones. 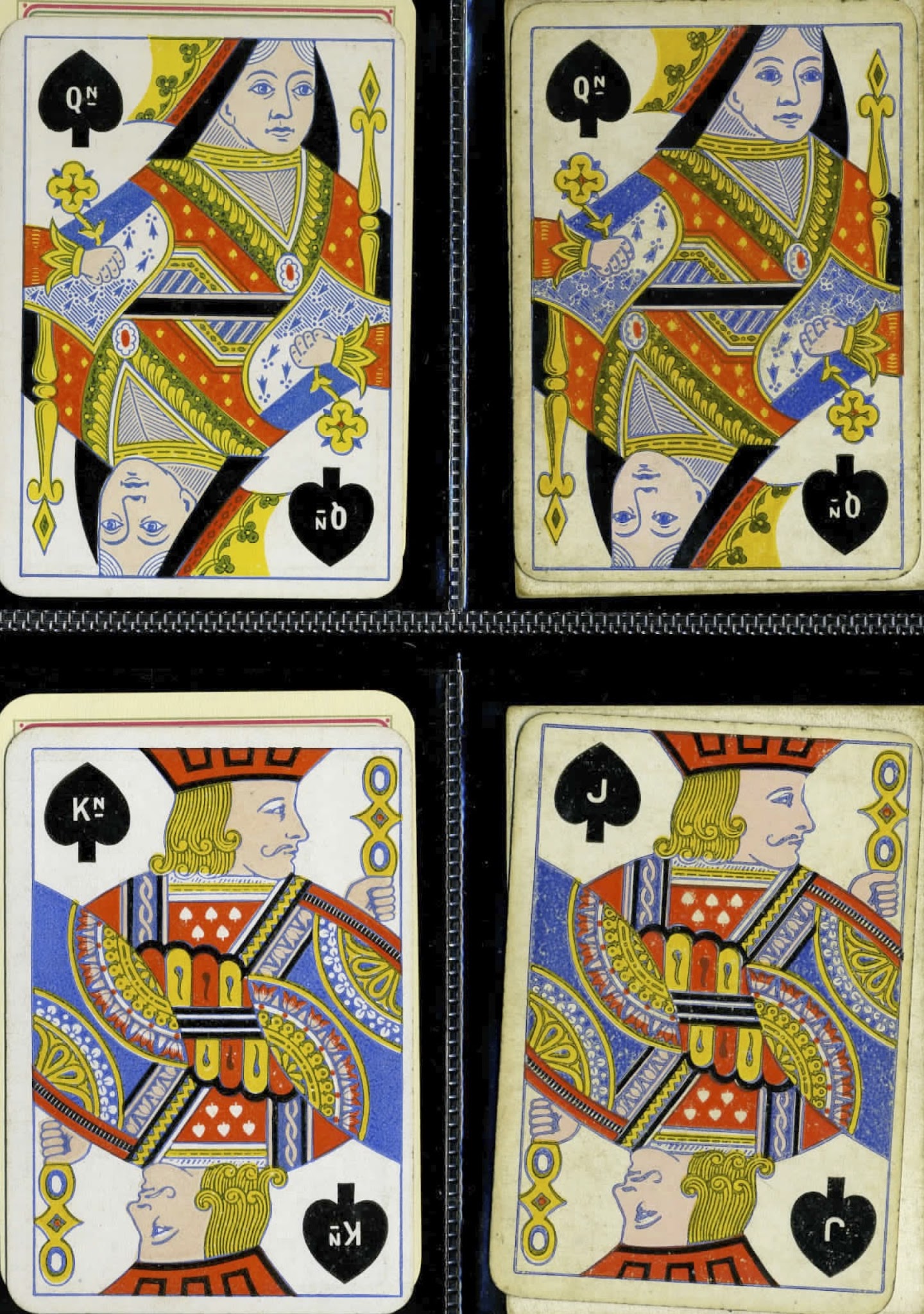 D6.1 is the same outline plate printed in black instead of blue with just red and yellow added. There is a lot more superimposed decoration on the clothing, too. 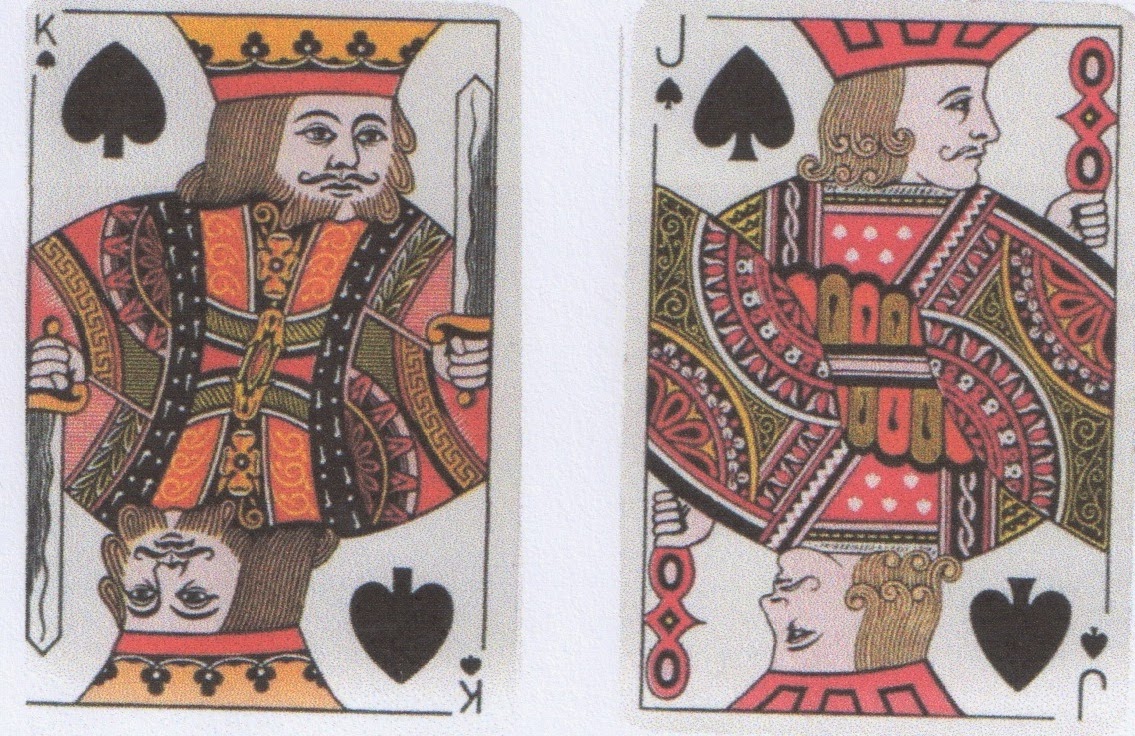 The later packs, both wide and bridge-width, have redrawings and the final version has a lot of changed decoration on the clothing. 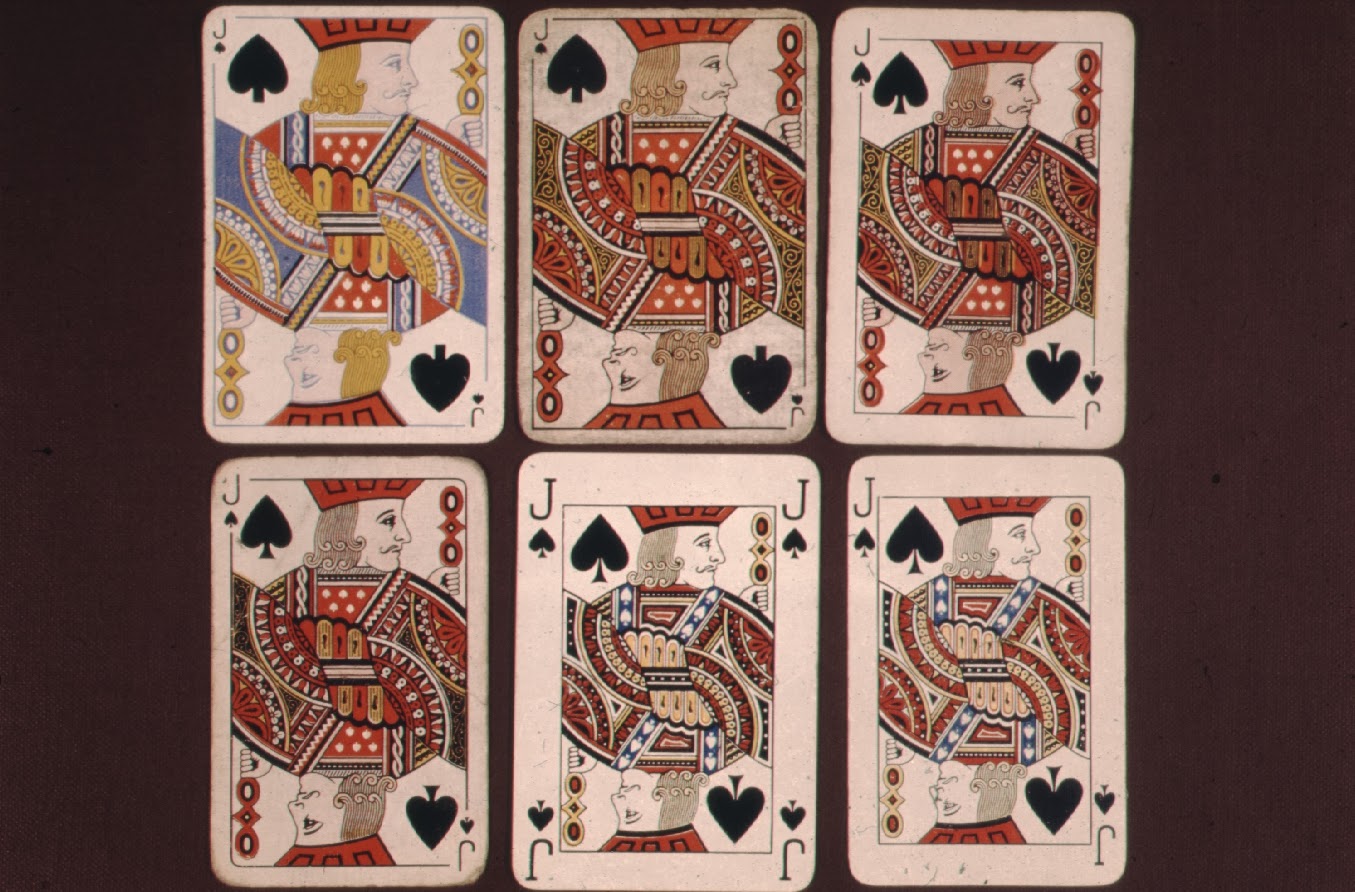 Another aspect of plates relating to dating is to be found in the changes that the shape of the pips underwent. De La Rue had a number of different pip types, some of which are illustrated above. However, there are a number of changes which appear to have occurred in fairly quick succession. As with most other attempts at dating, the suggested dates are only approximate, but the sequence in which the different types appeared is right. There was also some overlap, so that two or more types were used simultaneously. In some packs the number pips are different from the court pips. The first set, which I've labelled Type F, is only found with packs of the Old Frizzle period. There were no doubt a number of plates, as there is very slight variation of pip shape, but the main characteristics of all of them are that the spades and clubs have very little, if any curvature below the join with the stem, and the hearts have a well defined indentation at the top. 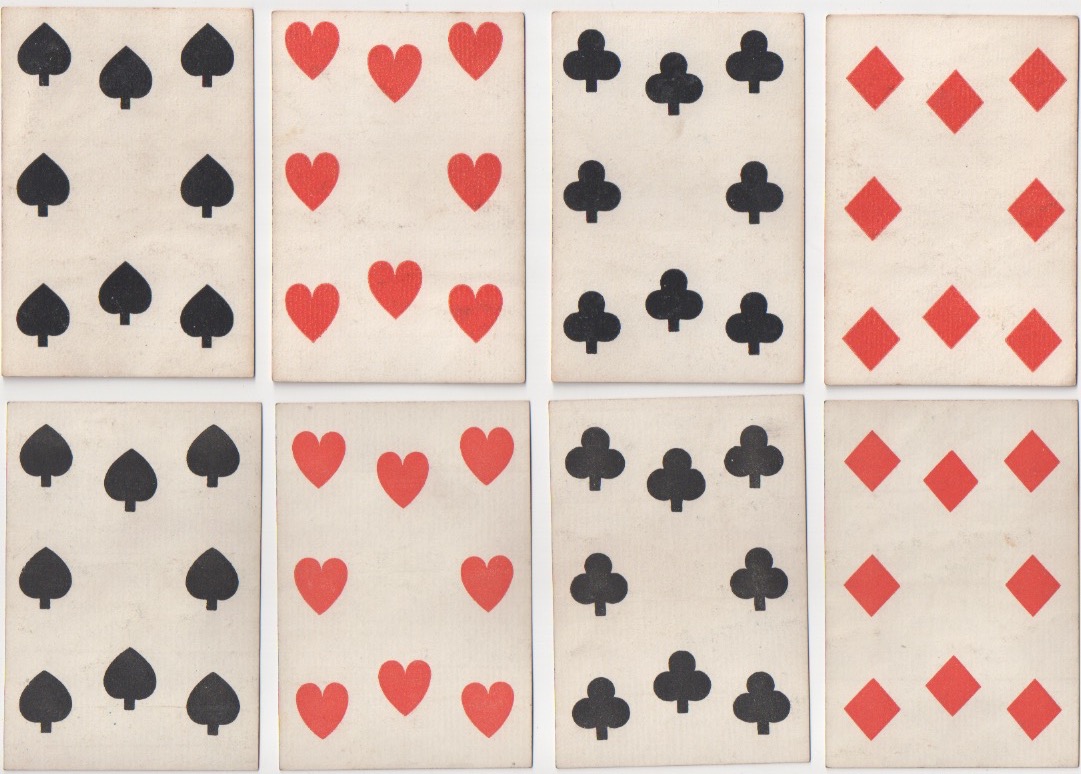 In Type 1 onwards there is more curvature in the black pips and less of an indentation in the heart. 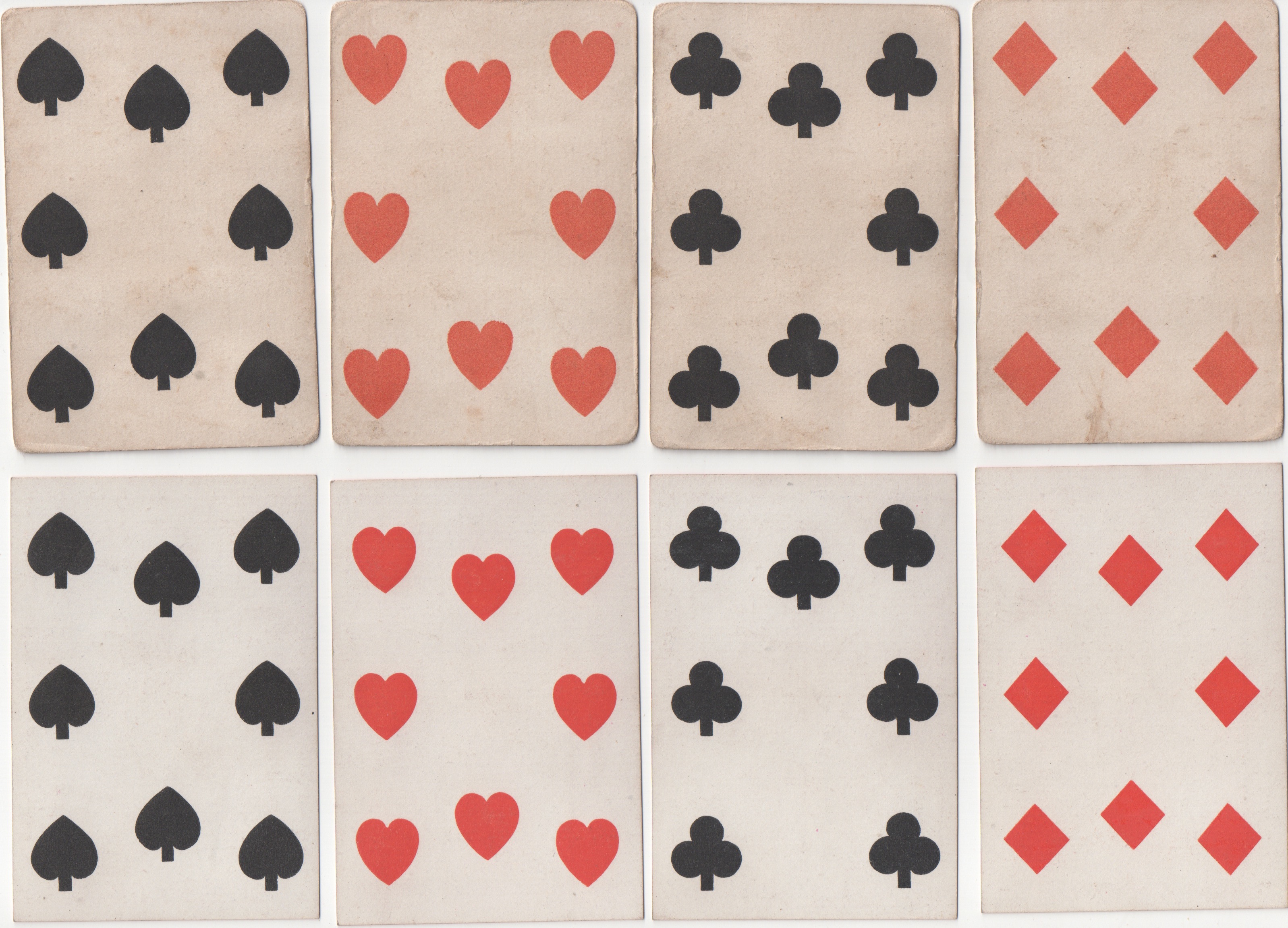 In type 2 the spades and clubs have remained the same, but the red suits have been redrawn and take up less room on the card. 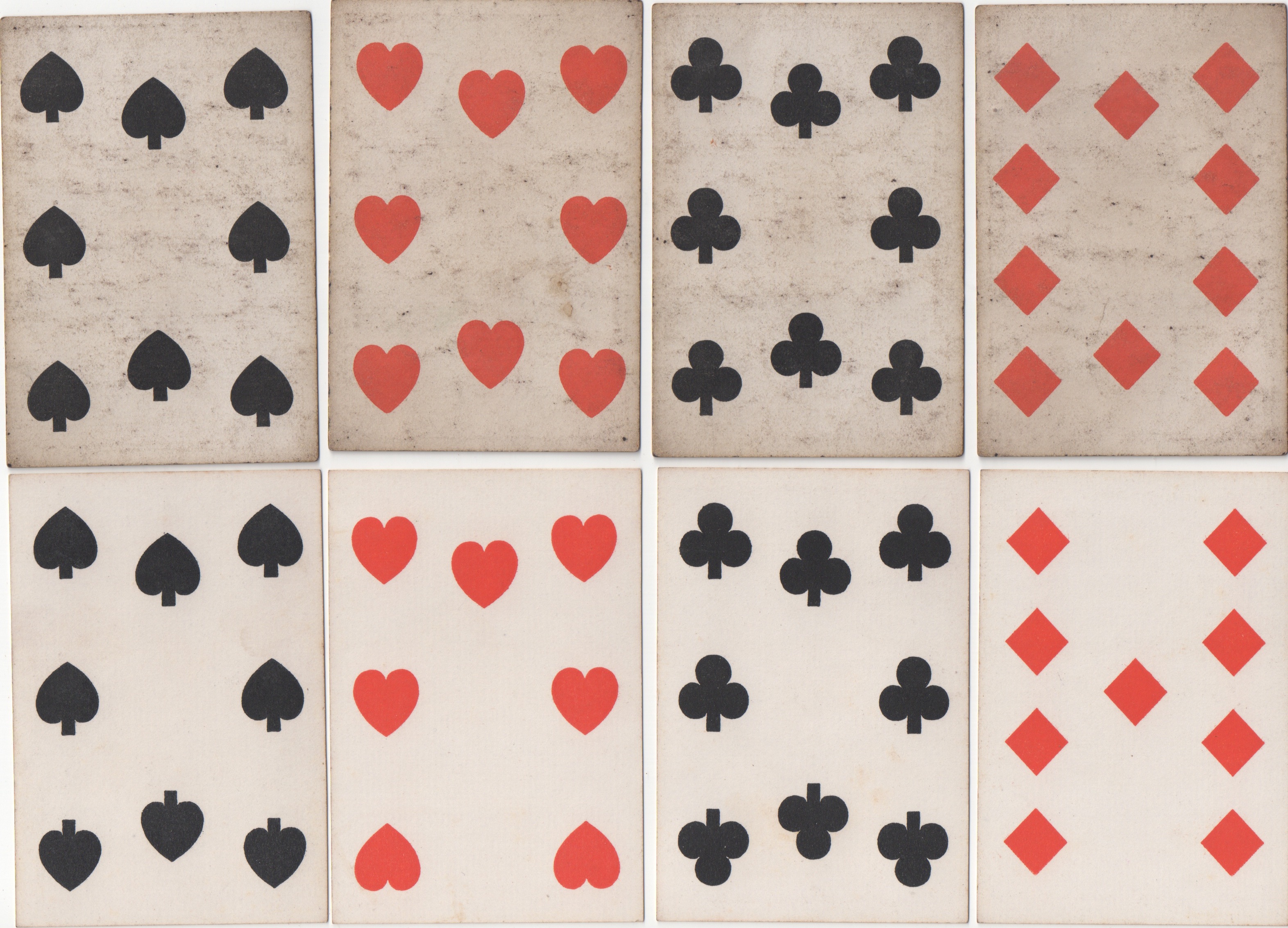 In type 3 the pips have all been redrawn and in type 4 they are double-ended, though the shapes have remained the same. Type 1 is found with D4.1 courts; types 2 and 3 are found with D5; and types 3 and 4 are found with D6. Type 4 remained in use with the early Dexter indices of 1878-85 and with the smallest indices of the 1880s in which the aces are represented by '1', but with the introduction of the next size of index (though still quite small) in c.1890, the pips were redrawn yet again. These were used with D6 and D6.1, as illustrated above by the first two JSs.

See also page 5 for other details of De La Rue.

I should explain here how I arrive at my alphanumeric designations. Each different first digit refers to the outline plates: if a new one is produced, it receives a new number, e.g. D1, D2, D3, above. The sequence has no particular significance, though they are usually in chronological order. (This may not be the case if two sets of courts co-occur, or if I have discovered a variant after having fixed the basic classification.) The decimal point system is used to differentiate variation using the same outline plate, so D4.1 has the same outline plates as D4, but the colour plates vary; similarly with D6 and D6.1. Copies of a design are prefixed with either X, if no originator of the copy is obvious, or a more local one, such as US for American copies and T for Turnhout copies, by whichever maker.

It is then possible to take this classification as a basis and see whether other makers took it as a model. So, for example, we find Brepols using D9 as a model right into the 1950s, long after De La Rue had ceased to print it. 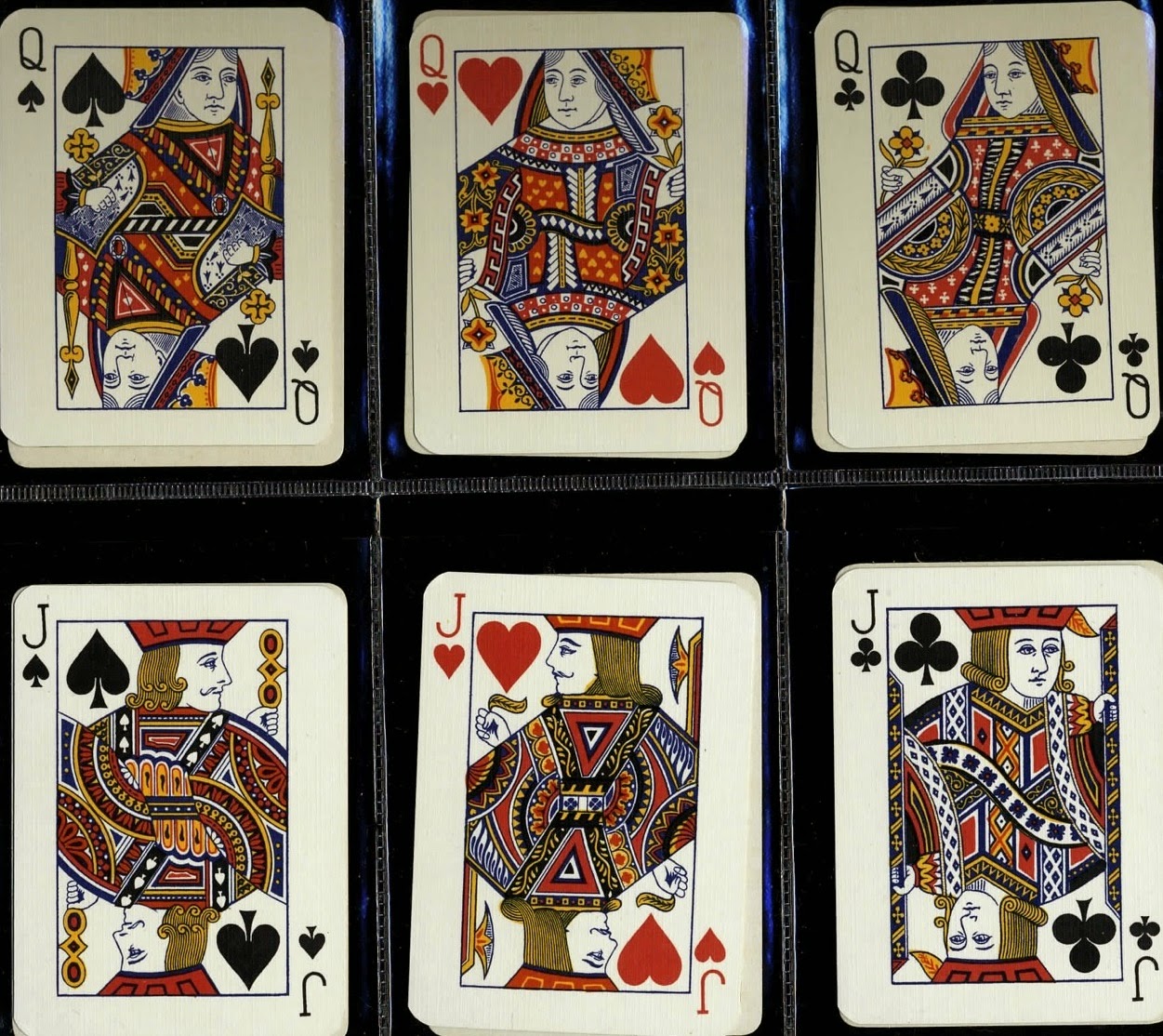 This particular maker was quite prolific in his use of other people's designs, but also adapted them further in his own versions. He redrew D3 with more of his own features and he even produced his own double-ended version. 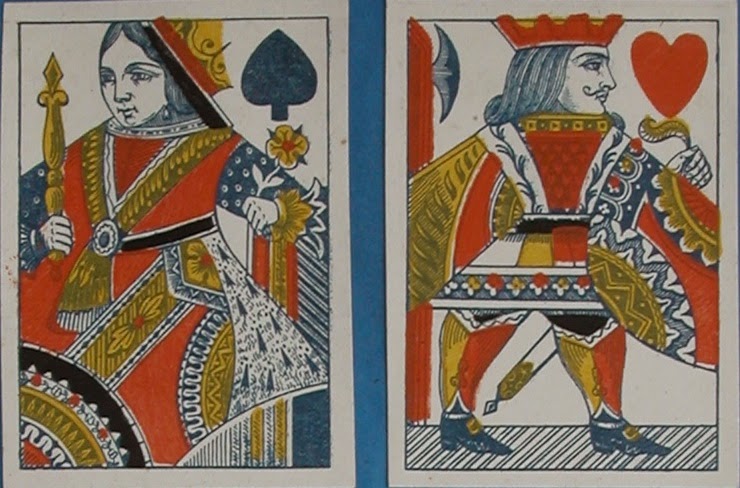 I shall concentrate on just two of the early designs used by Waddington from 1923-c.1933: W2 and W2.1. These are related in that the latter is a reduced version of the former. During the Wills scheme of 1932-34 W2.1 was used plus a slightly retouched set of plates (W2.11). After this, perhaps because the plates had worn out, a new drawing (W3) was used. In the case of these Waddington courts the variation is in the colour plates, not the outline. They are only slight variations, but occur regularly. Some of the courts have very few differences, e.g. the KD is found with and without pink on his sword when the faces are pink, the latter occurring only occasionally. On the other hand, the JH and the QC have seven each. I won't give all the details, as this would take up too much room (and no doubt become boring for many!), so I'll exemplify first some of the variants of the JH and QC.

Each of these variants can be given a number in the same way Paul Bostock and I have done for the wood-block courts. I've put the number assigned to the variant after or under each example above. The other courts would be treated in the same way. We can then give a profile of the courts for each pack. The courts of each suit in the pack are given in the following order: S[K - Q - J], H[K - Q - J], C[K - Q - J], D[K - Q - J], so we can read off the variants easily and compare the profiles across packs. I'll give two examples of the packs in my collection.

So, in the lower pack the QS, KH, JH, QC, QD and JD are different from in the upper one.

Of course, this approach can be applied to any type of card, standard or non-standard, or card game. So, to finish off, here are some Berlin pattern variants. See also the wopc page on the North German pattern: 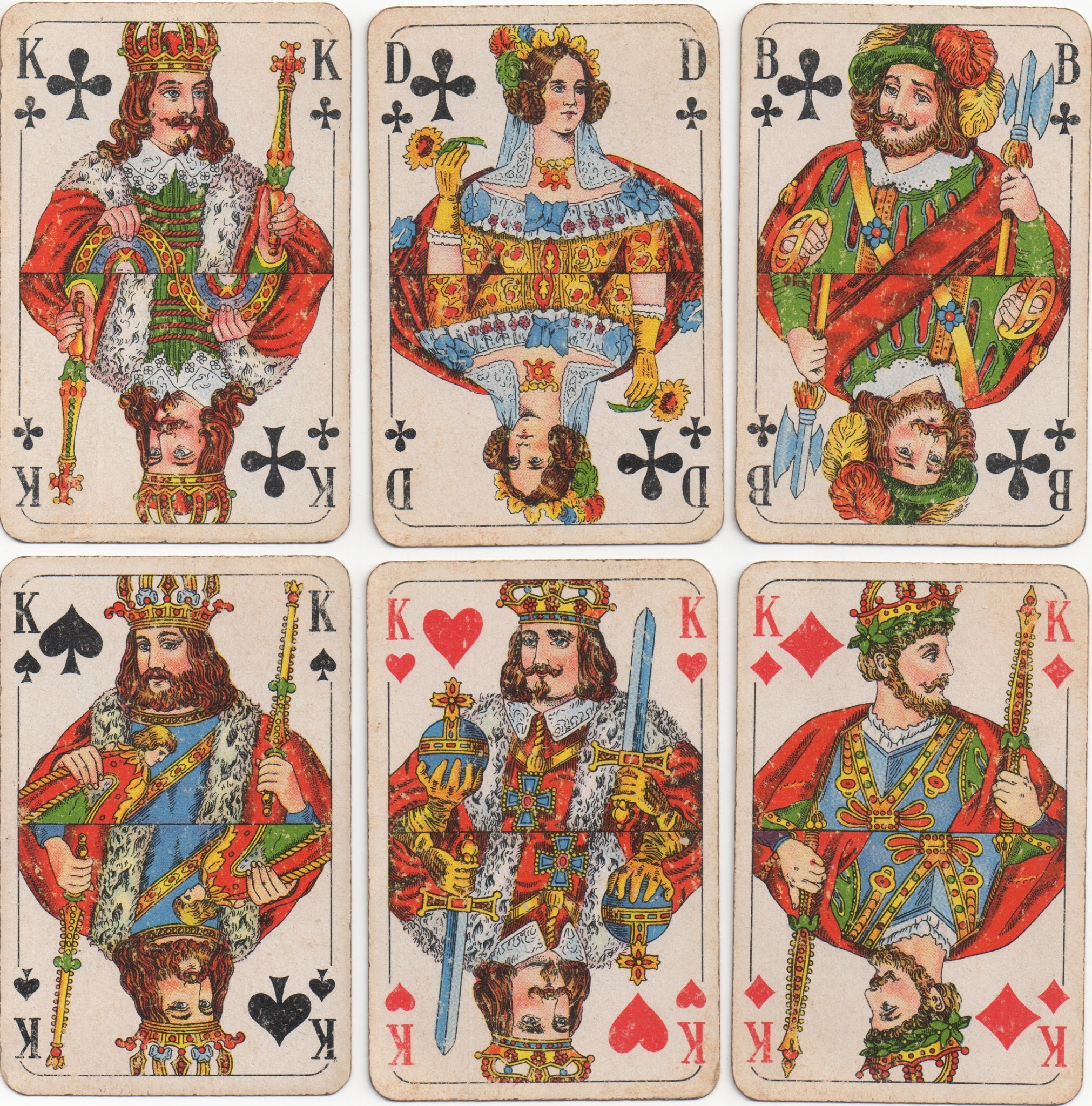 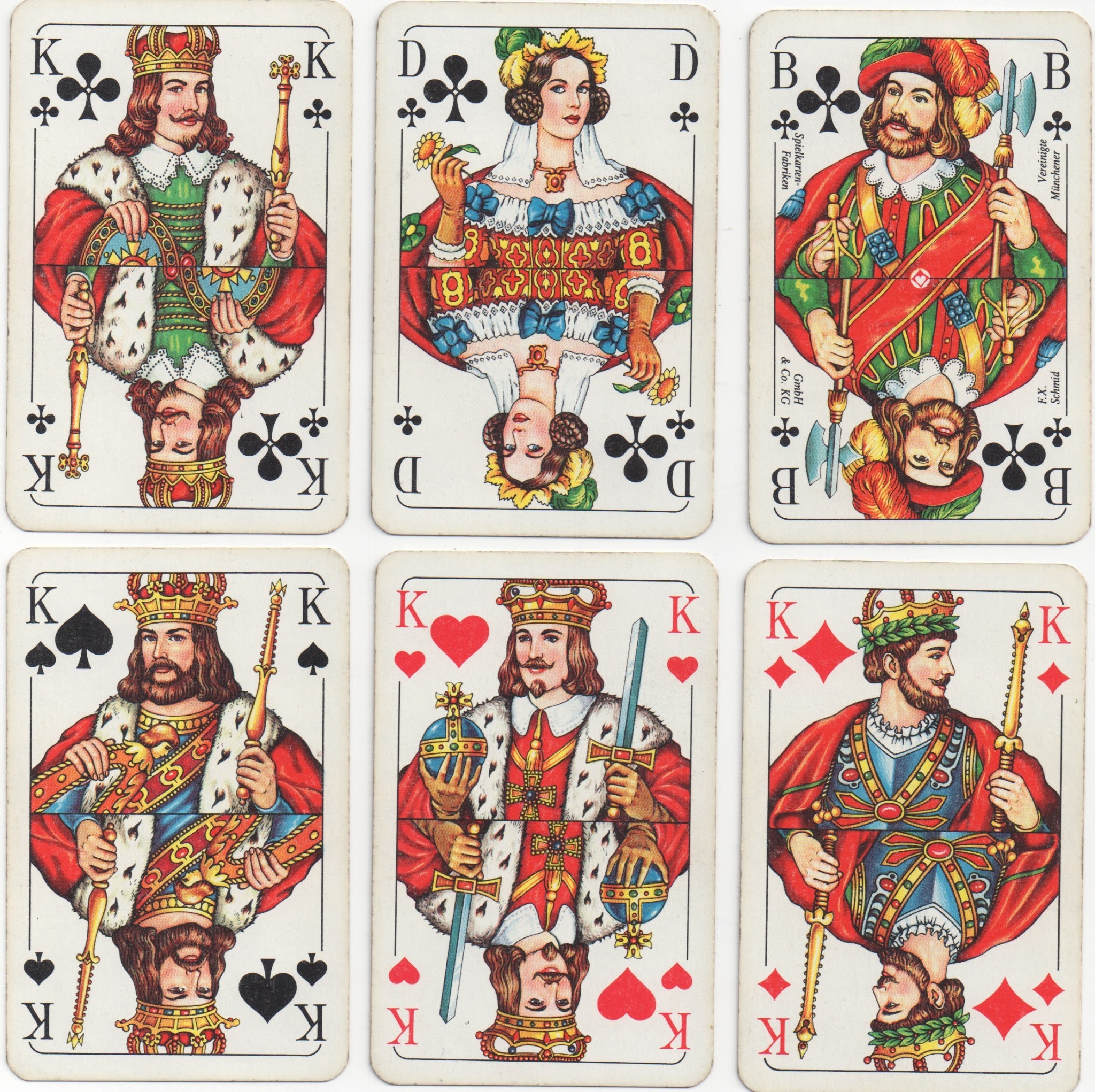 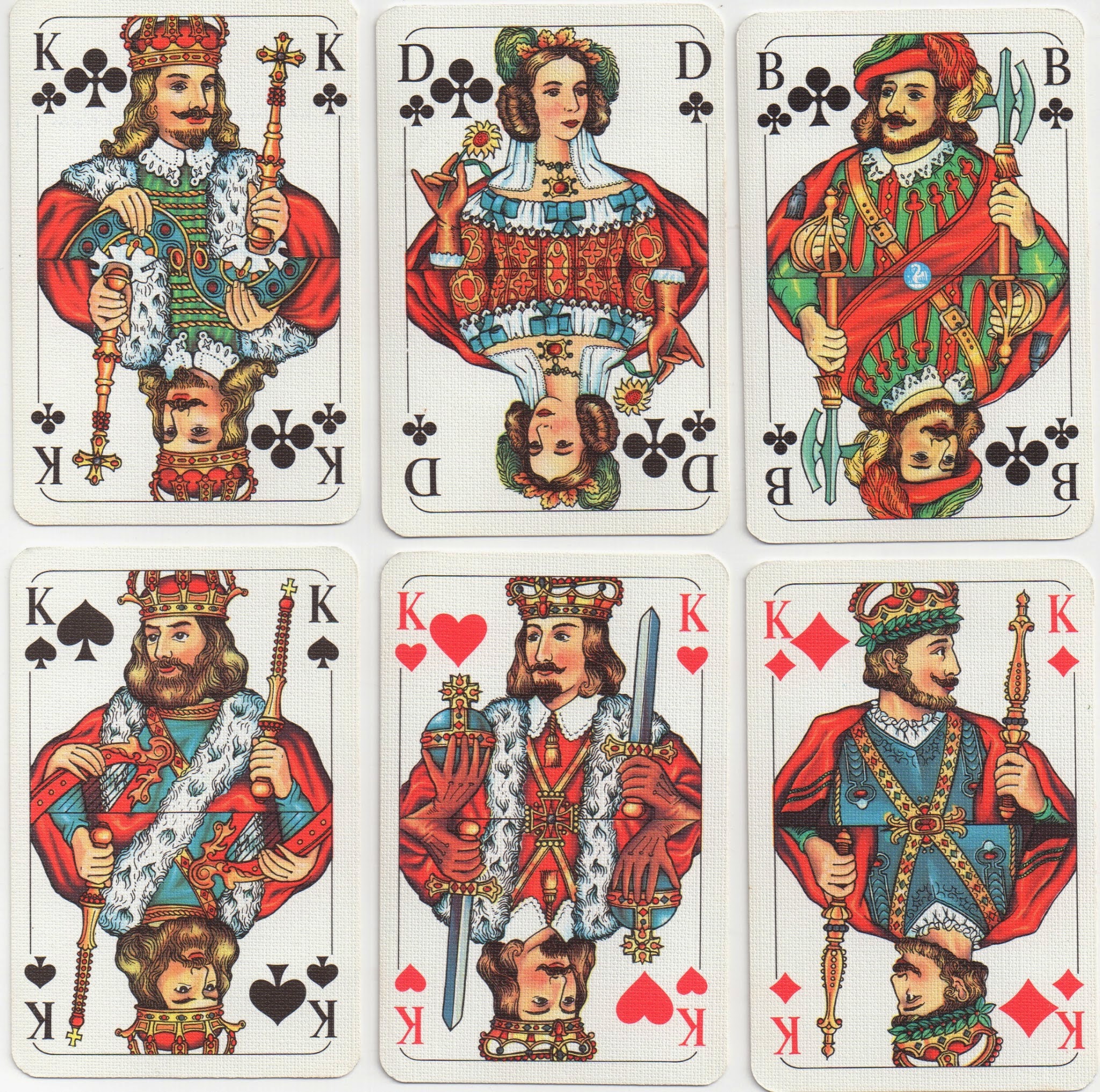 These are all different drawings of the pattern: look at the KS, for example, and note the differences in the edges of his cloak and the band across his chest. We can also trace small changes in design in the history of one maker and its descendants, just like we have done for De La Rue. Below are three JCs which show small changes in the plates and colour schemes, while maintaining the main elements of the design.

Here are some variants of other makers, some of whom date from after the collapse of ASS as a major player. I don't know even the approximate dates of some of them. 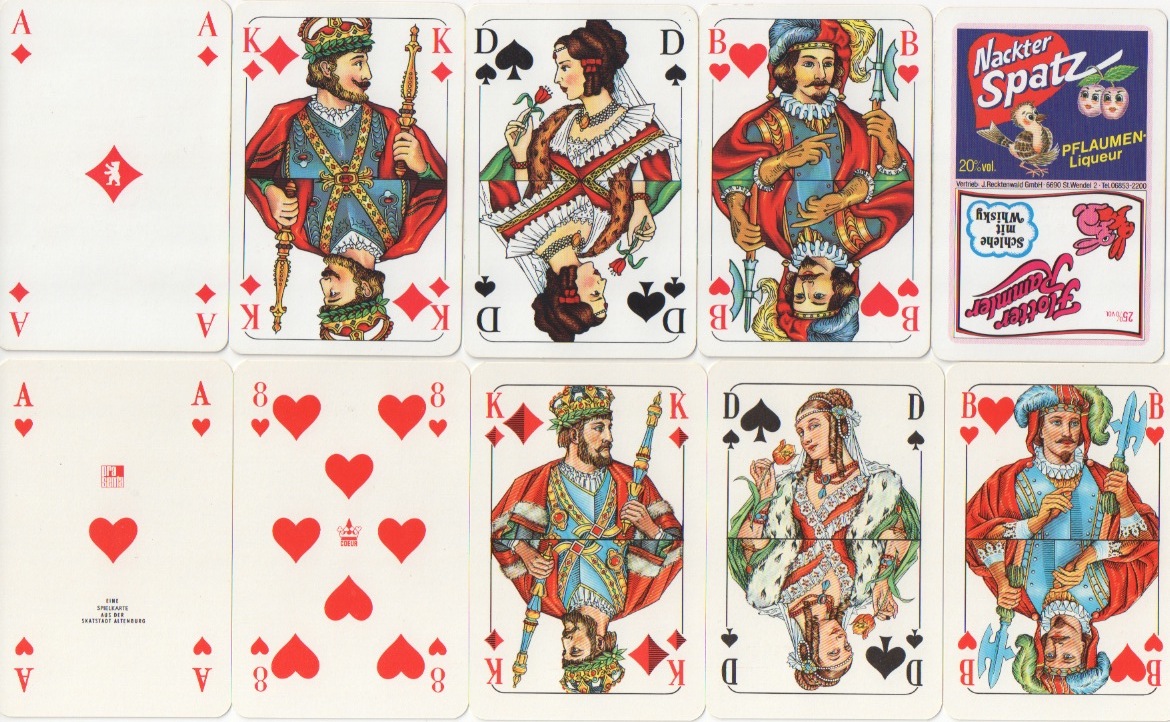 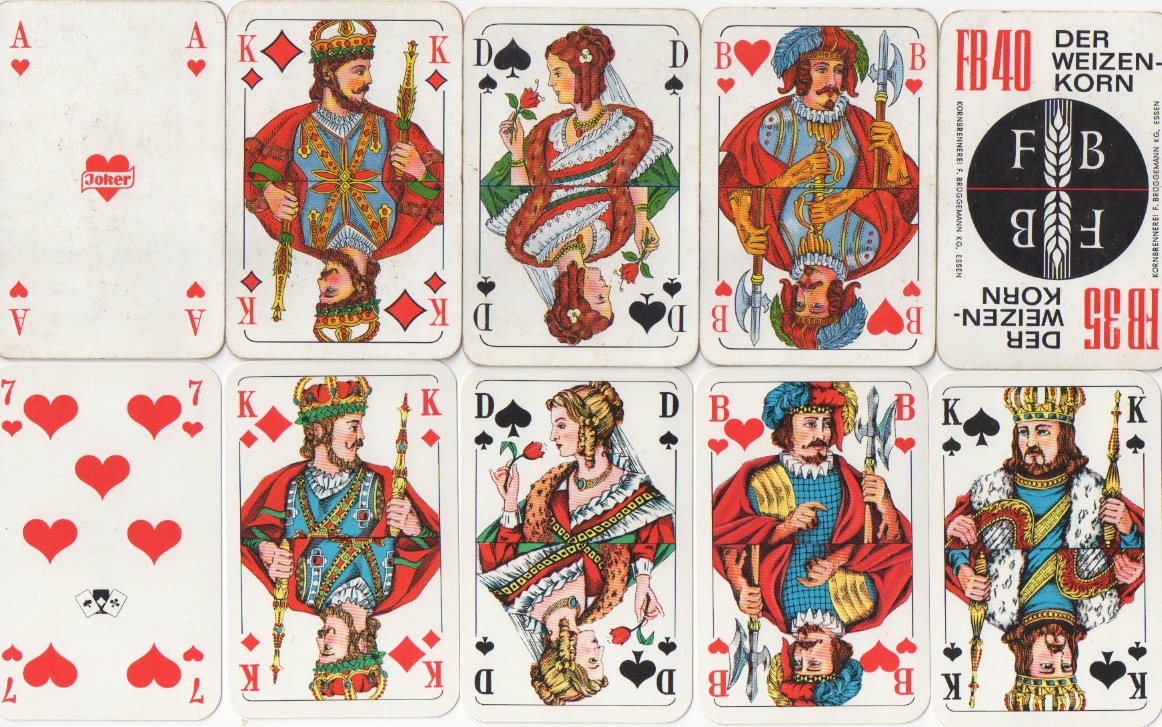 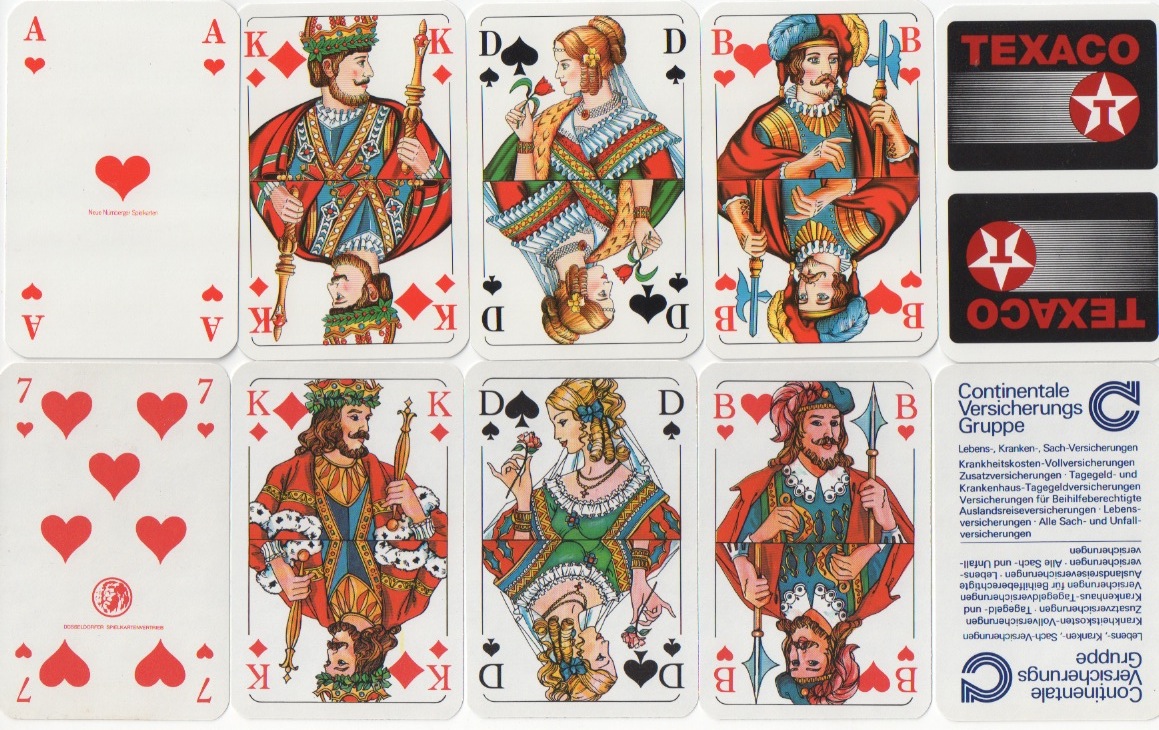 I hope the variation is fairly obvious in these examples.

After that we might want to ask whether the courts illustrated below are a mixed up version of the Berlin pattern or just a non-standard derived from it. 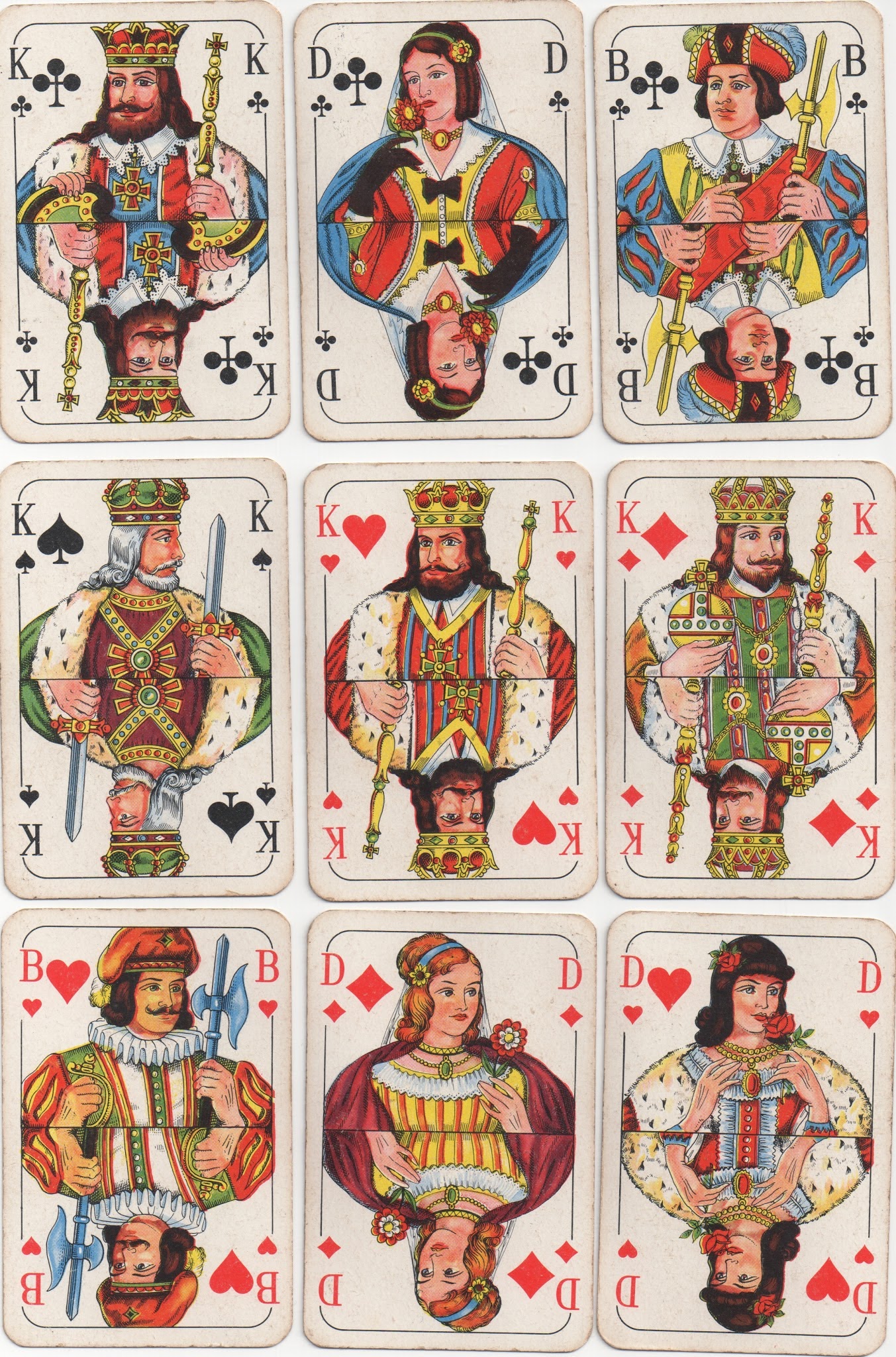 It's all in a day's collecting!