“David Robert” playing cards by an anonymous manufacturer featuring 13 designs in all, copied across each suit, transporting the viewer to Egypt and Nubia through the eyes of Scottish Orientalist painter David Roberts (1796-1864). The two jokers are identical. The indices are not reversible, despite being printed in opposite corners.

Right: click the box to zoom →
(The Arrival of Simùn in Giza) 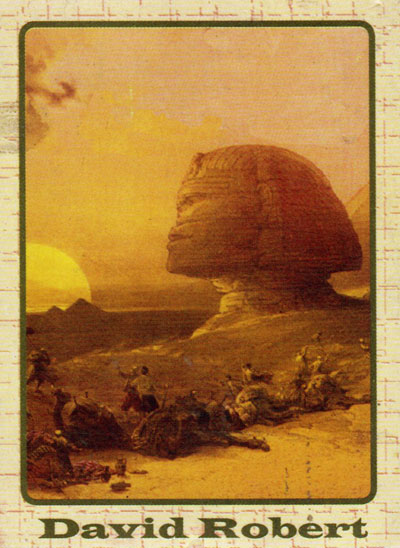 Above: “David Robert” playing cards with artwork after Roberts' Sketches in Egypt and Nubia, including Views of the Nile, Approach of the Simoom, the Statue at the temple at Wadi Saboua and The Naos Of The Great Temple. 52 cards + 2 jokers in box, anonymous manufacturer/publisher, undated. Images courtesy Matt Probert.