The Story of a Piedmontese Tarot

Article published by courtesy of the Author. Translation by Vic Berti.

Stefano Vergnano’s Tarot and playing card factory holds a special place in the history of the Tarot. In fact, it was even thanks to Vergnano that in Piedmont (Northwest of Italy), around 1826, a veritable “Golden Age” began for Piedmontese Tarot manufacturers.

The history of the Tarot in Piedmont was studied in depth some years ago by two respected scholars, Thierry Depaulis and Franco Pratesi. Both were responsible for the identification of the main individuals who in the eighteenth century moved from France to Piedmont to start local production of Tarot and playing cards. 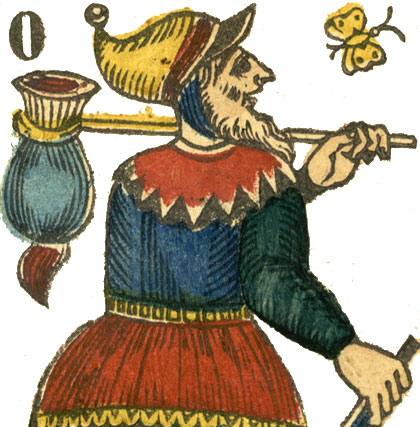 Above: The Fool chasing a butterfly from the Vergnano Tarot in the Piedmontese style, c.1835

The transition of Tarot cards from “Marseillais” to “Piedmontese” did not happen overnight, but was the result of an evolution whose steps are defined by specialists in two early prototypes: the “early Piedmontese Tarot” (substantially identical to Marseille), and the “early changed Piedmontese” (showing some characteristics of the new tradition).

Who were the pioneers of the new tradition? Among the most interesting documents, I discovered two quotes from the “Gazzetta Piemontese”. In 1826, this newspaper mentions the disassociation of two partners from the “Guglielmo Marengo and Co” playing card factory in Turin. The new company was registered to Stefano Vergnano. In 1828 the same newspaper mentions Giorgio e Stefano Vergnano (father and son), as manufacturers of “so-called castrated (i.e. some cards eliminated) Tarot and double-headed cards, at moderate prices”.

Another interesting event dates from 1832. In that year Turin hosted the second Trade Fair of the Reign of Savoia. Both the factories of Guglielmo Marengo and Stefano Vergnano received an “honourable mention” by the Royal Chamber of Commerce for the quality of their decks. At the same time Giovan Battista Guala of Ghemme, another Piedmontese Tarot manufacturer, was also mentioned. It is doubtful that an award would have been bestowed to those tarot decks unless, when compared to their French counterparts, they showed some innovative design.

Above: early changed Piedmontese Tarot cards by Vergnano with Italian inscriptions and Arabic numerals, c.1835-45. The Fool chases a butterfly, instead of being chased by a dog. Bibliothèque Nationale de France.

A Trove of the Piedmontese Tarot

At this point a question arises: what were the Tarot images that Marengo and Vergnano produced? To discover this, we must examine those decks in public and private collections, and documents recently rediscovered by an Italian researcher, Nicola De Giorgio, at the Academy of Sciences of Turin. The Academy is a “treasure-trove” that preserves the Tarot history in the Kingdom of Savoy before the unification of Italy.

To this day the Academy holds many uncut sheets printed with woodcut technique which, by Royal Decree, had to be lodged by the manufacturers at the Royal Offices of Commerce. These sheets are the earliest evidence relating to the birth of the authentic Piedmontese tradition of Tarot.

Unfortunately, some sheets have been lost, so we cannot have a detailed view of the iconographic evolution. However we can say that, in general terms, that the factory of Guglielmo Marengo produced, since the early nineteenth century, the “early” piedmontese Tarot cards (ie: almost identical to those of Marseilles, with captions in French). But between 1826 and 1832 Stefano Vergnano deposited an innovative model (called “an early changed Piedmontese”) which was used - with some variations - in the following decades.

I shall not describe all the peculiarities of the Vergnano Tarot. It is sufficient to say that as well as captions in Italian, Arabic numerals instead of Roman, and new drawings of many Court cards, Vergnano introduced a totally new image: The Fool chasing a butterfly, instead of being chased by a dog or wild cat. Also, The Ace of Cups is a large jar filled with fruits and flowers. The Knight of Coins has an Arabic hat. The Knight of Swords has a Hussar helmet.

According to Franco Pratesi, the Vergnano factory went out of business around 1851, as demonstrated by some documents kept at the Archivio di Stato of Turin. The last Tarot produced by Vergnano was not an original design, but a review of the masterpiece engraved in Milan by Carlo Dellarocca for the printer Ferdinando Gumppenberg.

Above: Tarot cards produced by Vergnano based on model by Carlo Dellarocca, c.1850. The inscription on the ace of cups reads: "Vergnano a Torino".

In 2014 I personally supervised the faithful reprint of a Stefano Vergnano Tarot deck dated around 1845-50, but clearly based on a model made around the 1830. This reprint gives to all Tarot lovers of today the opportunity to observe in detail the features of the first true Piedmontese Tarot, and to highlight similarities and differences with “Marseilles” decks.

The “Vergnano Tarot 1830” was published by Araba Fenice in collaboration with Renaissance - Italian Style Art. It is a limited edition of 500 copies, numbered and signed by the editor, Giordano Berti, who is also the author of the historical booklet that accompanies the deck, available in Italian, English and Portuguese. The deck and booklet come in a wonderful book-shaped presentation box- created by art designer Letizia Rivetti. 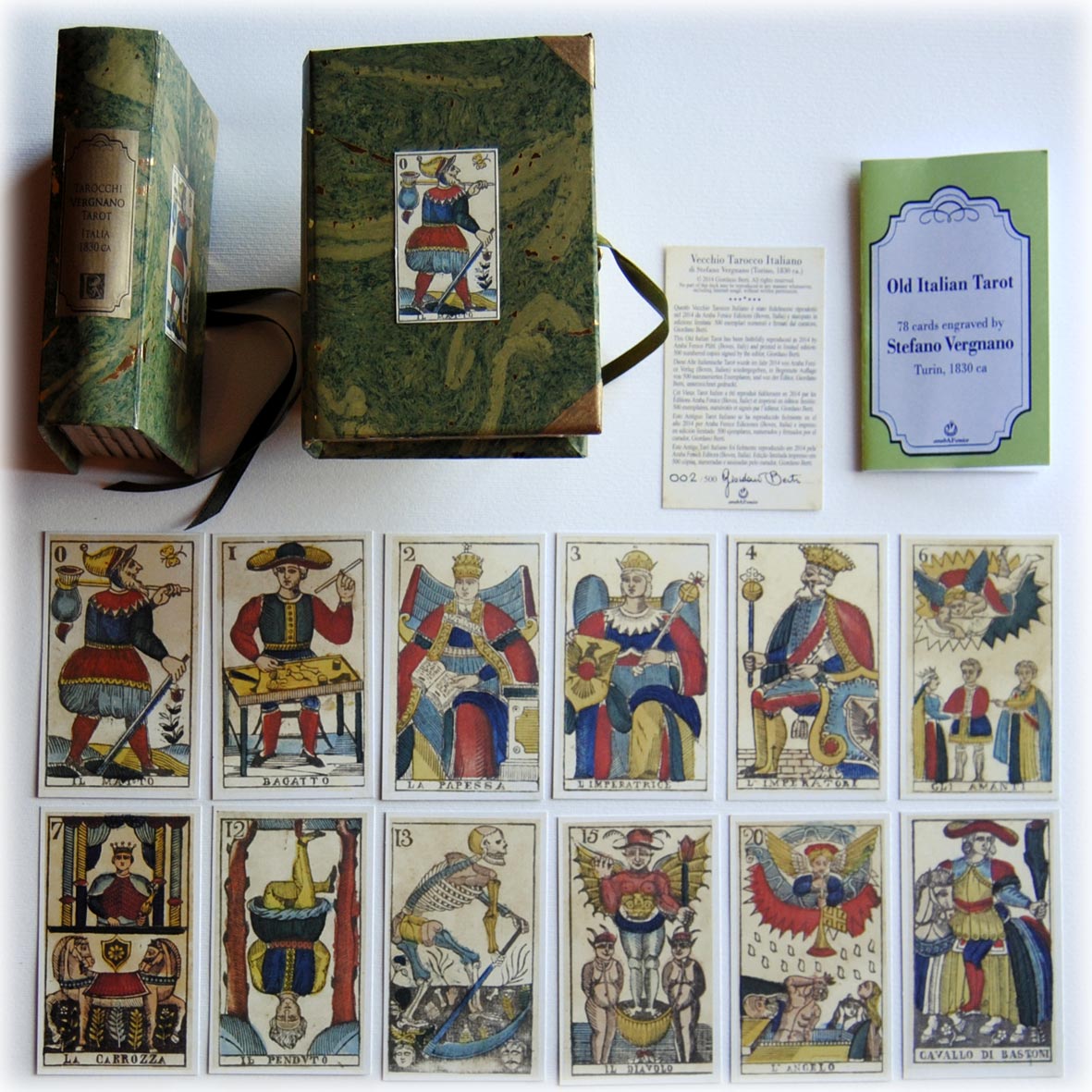 Illustrations of cards by Conver 1809-1833, Giovan Battista Guala and Vergnano c.1827 are from the Bibliothèque Nationale de France.