Atlantic Playing Card Co was a publisher and distributor of playing cards, also running a mail-order scheme offering playing card-related lines for “work at home” or self-employment. Some early Atlantic decks are listed in the Hochman Encyclopedia from as early as c.1910 with brand names which do not appear in this catalog, except “Monogram” c.1937. At one point it became known as Atlantic Playing Card & Match Co., Inc. The business was subsequently taken over by USPCC.

The catalog shown below lists many accessory items such as score pads, tallies, pencils, boxes, etc which would have been the principal goods being sold in the scheme, along with monogrammed playing cards. Some of the cheapest decks work out at around 25 cents ($36 per gross). 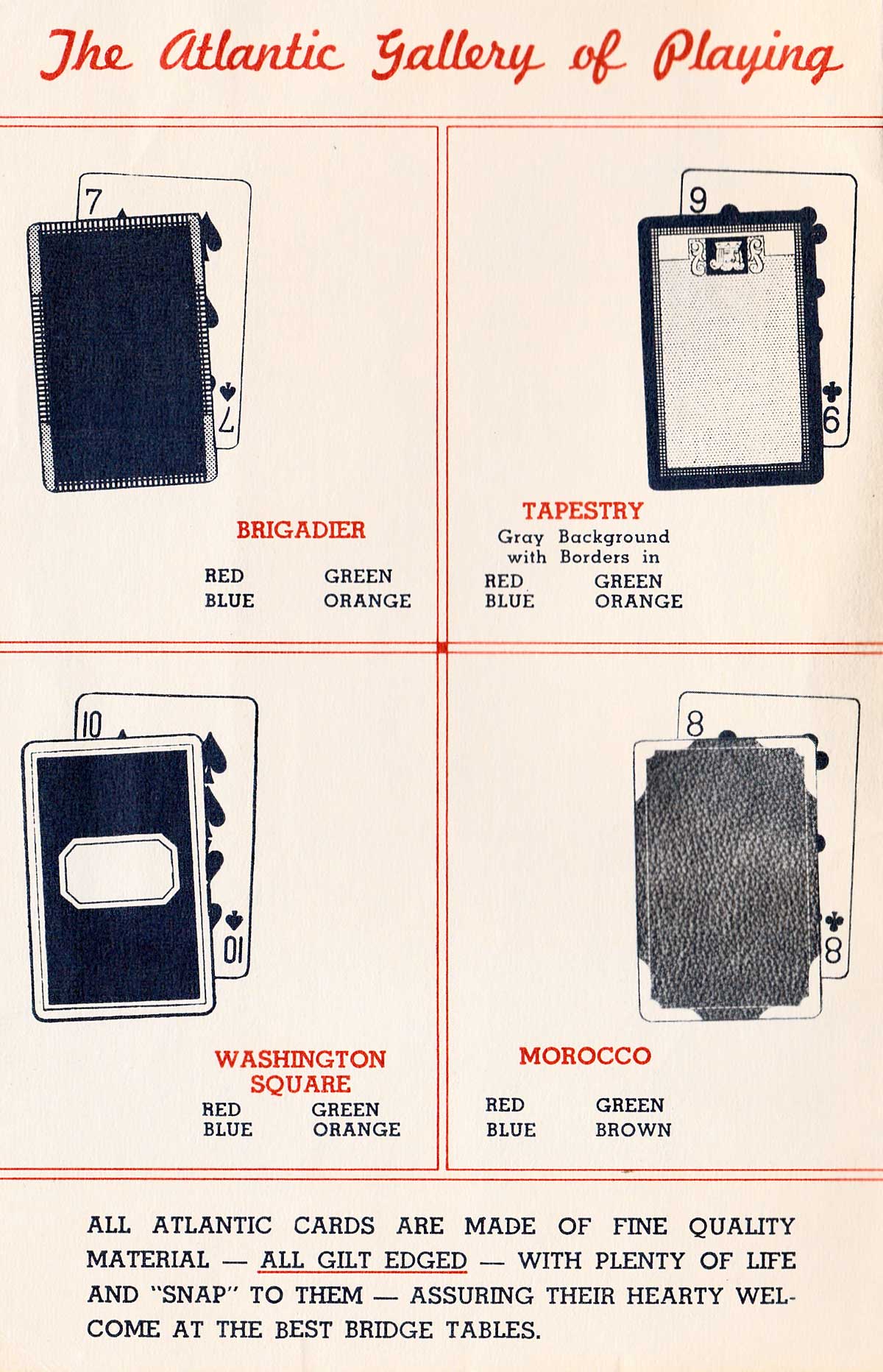 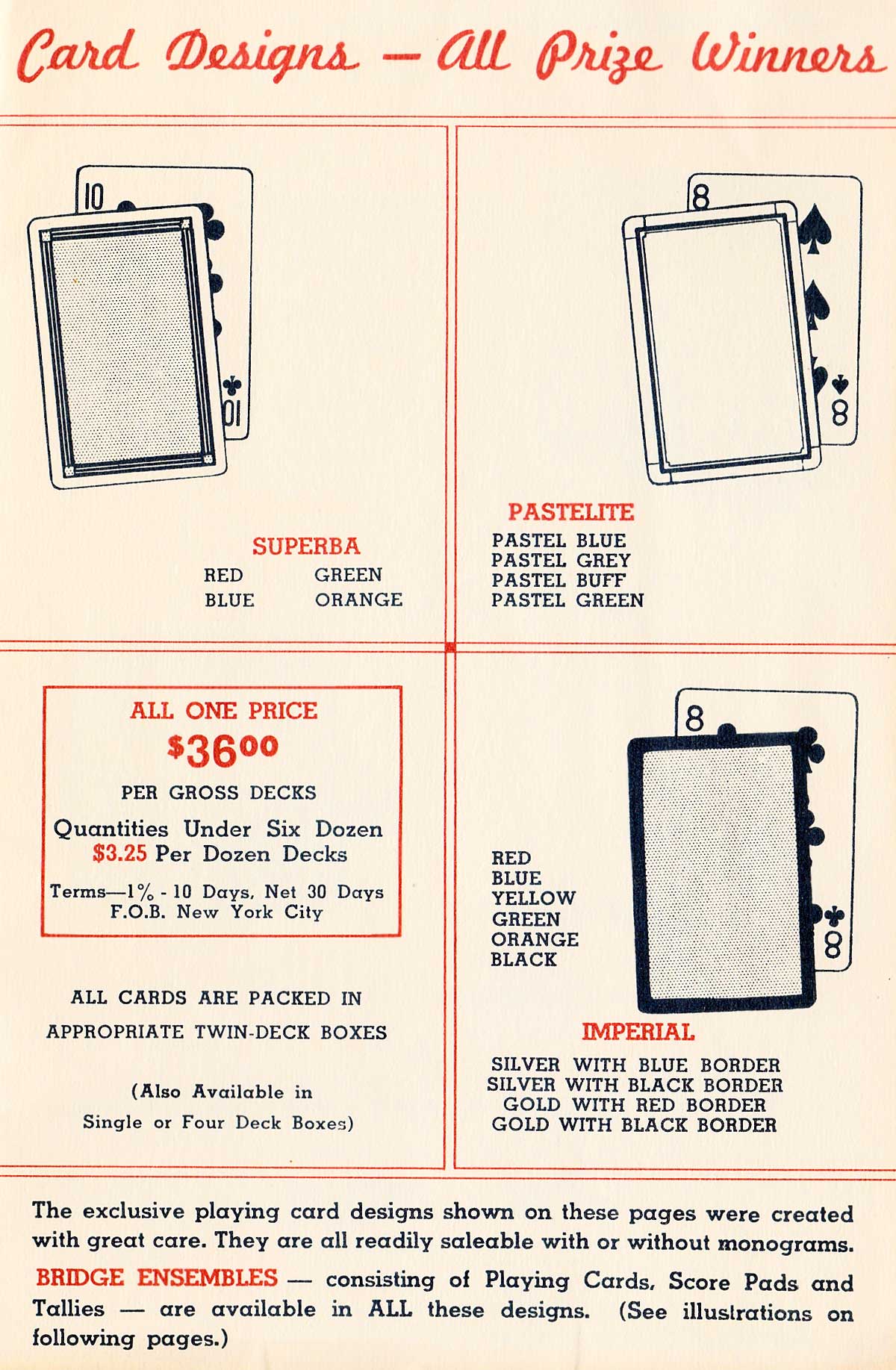 Above: by offering a series of plain back designs in flat colours with classy names such as “Brigadier” or “Washington Square” a personal monogram can be overprinted (onto pre-printed cards) in small batches and assembled into single, twin or four deck boxed Bridge Ensembles with gilt-edged cards. Ideal for department stores, Bridge clubs and the like, or as wedding souvenirs and extra-fine gifts. 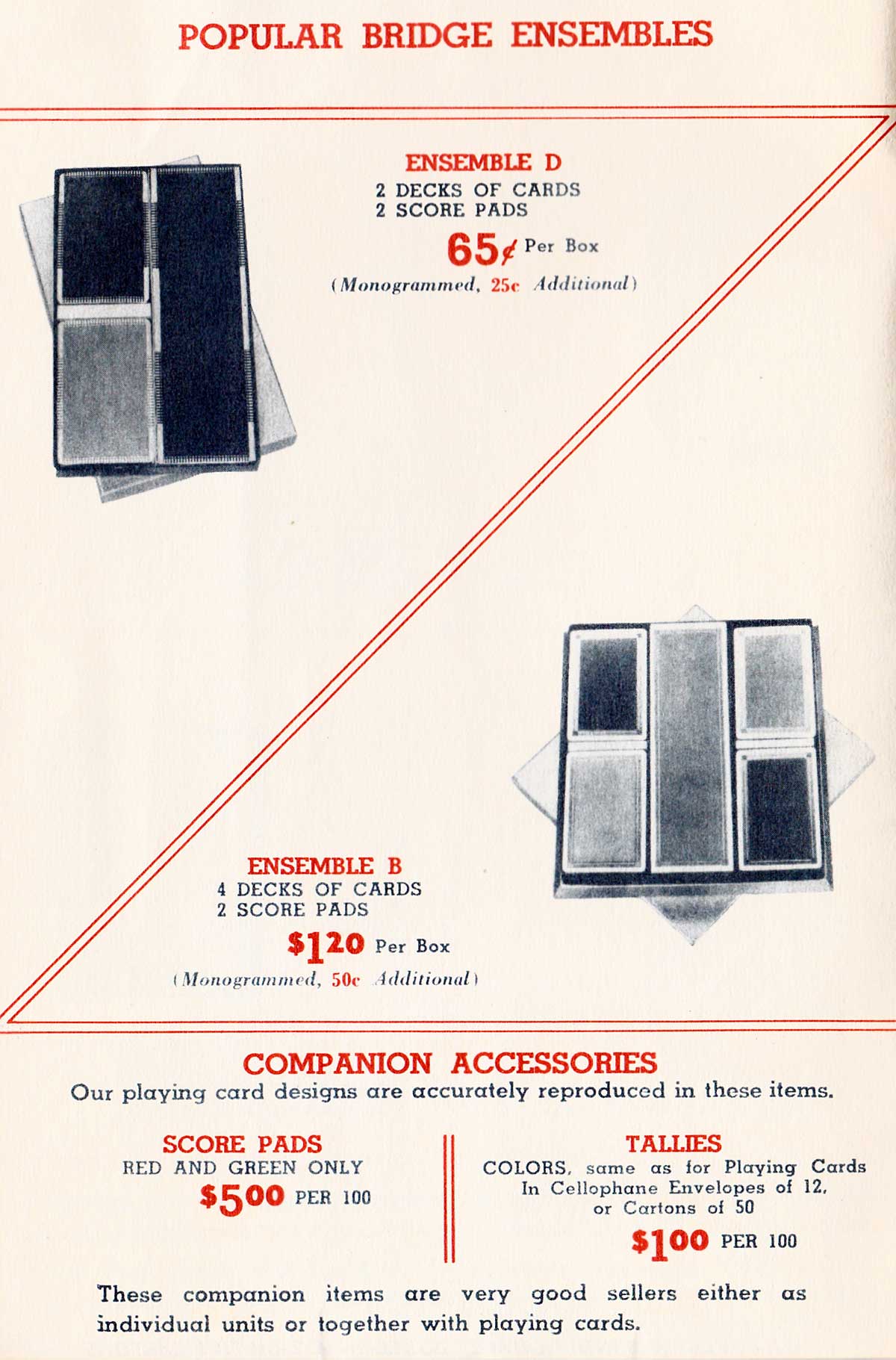 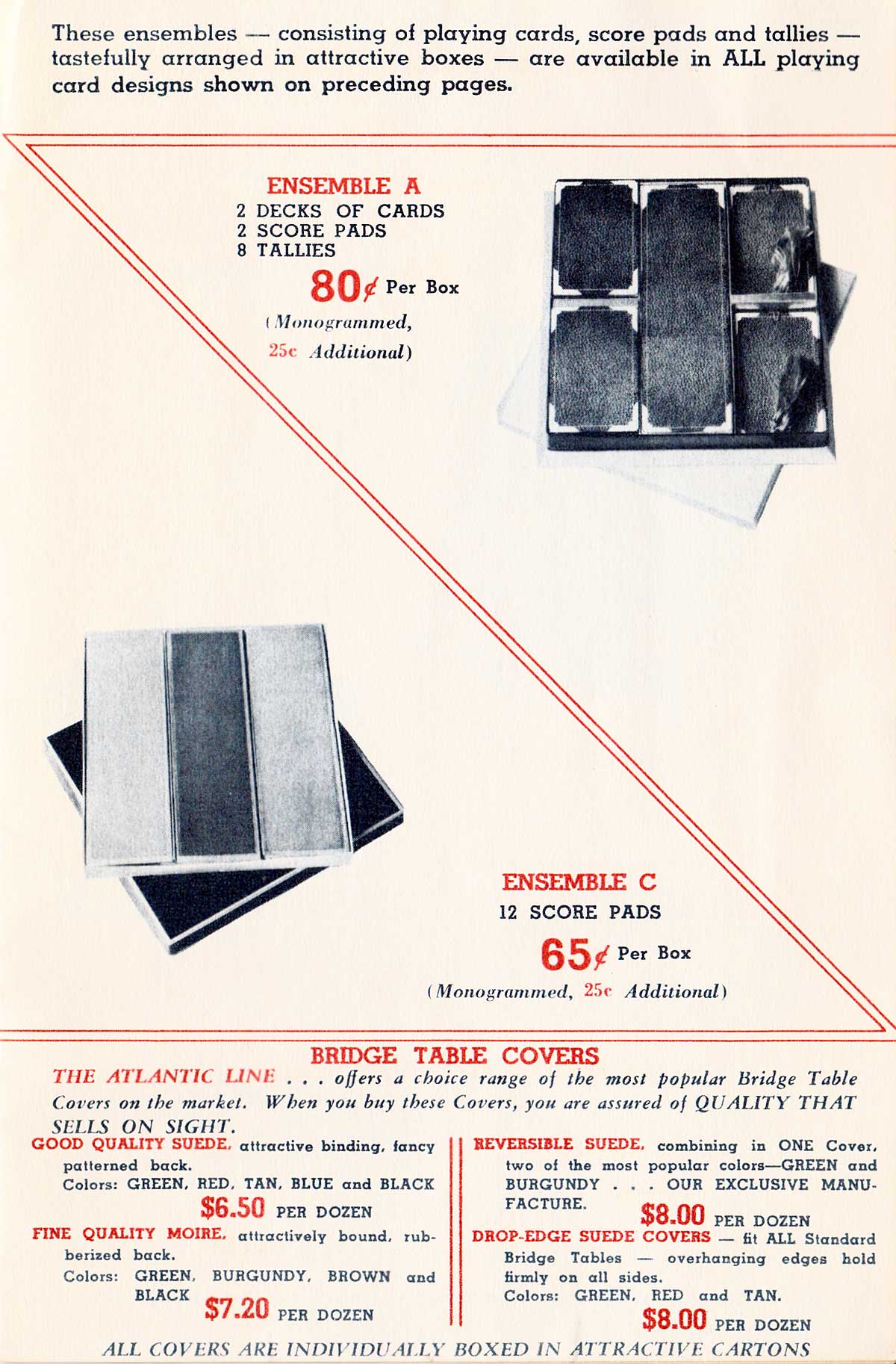 Above: more details of various wholesale Bridge Ensemble boxes and companion accessories. As the catalogue has no contact details it was most likely to have been left with existing customers or prospects. 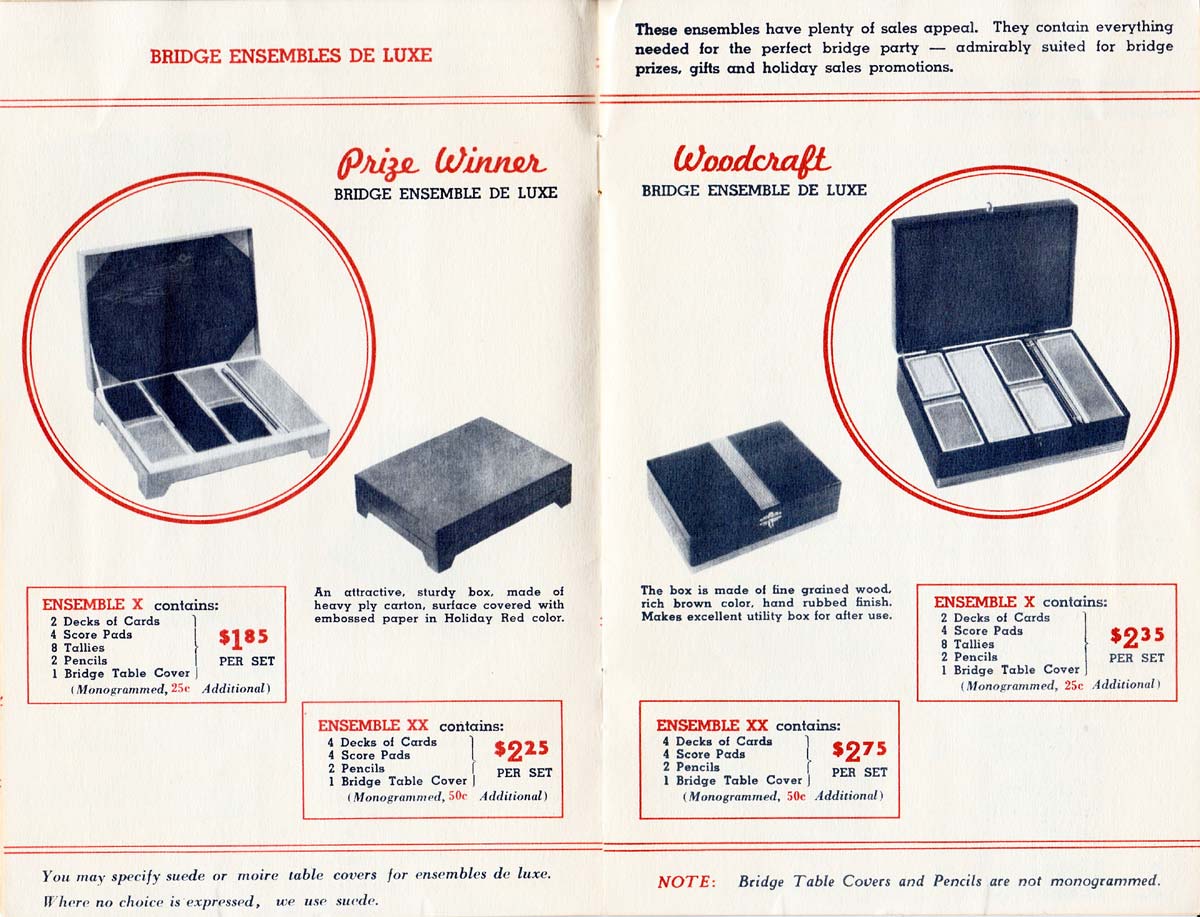 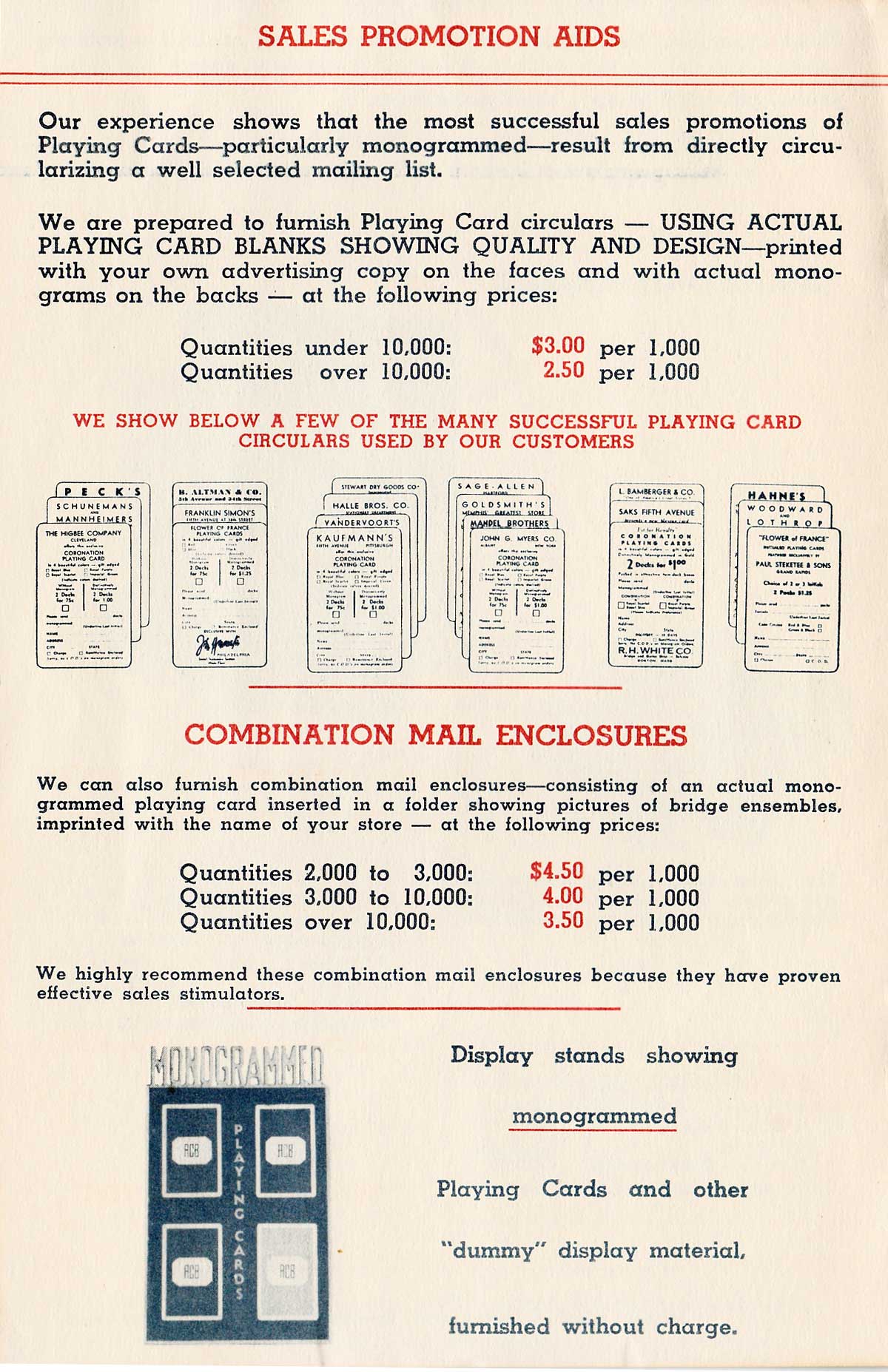 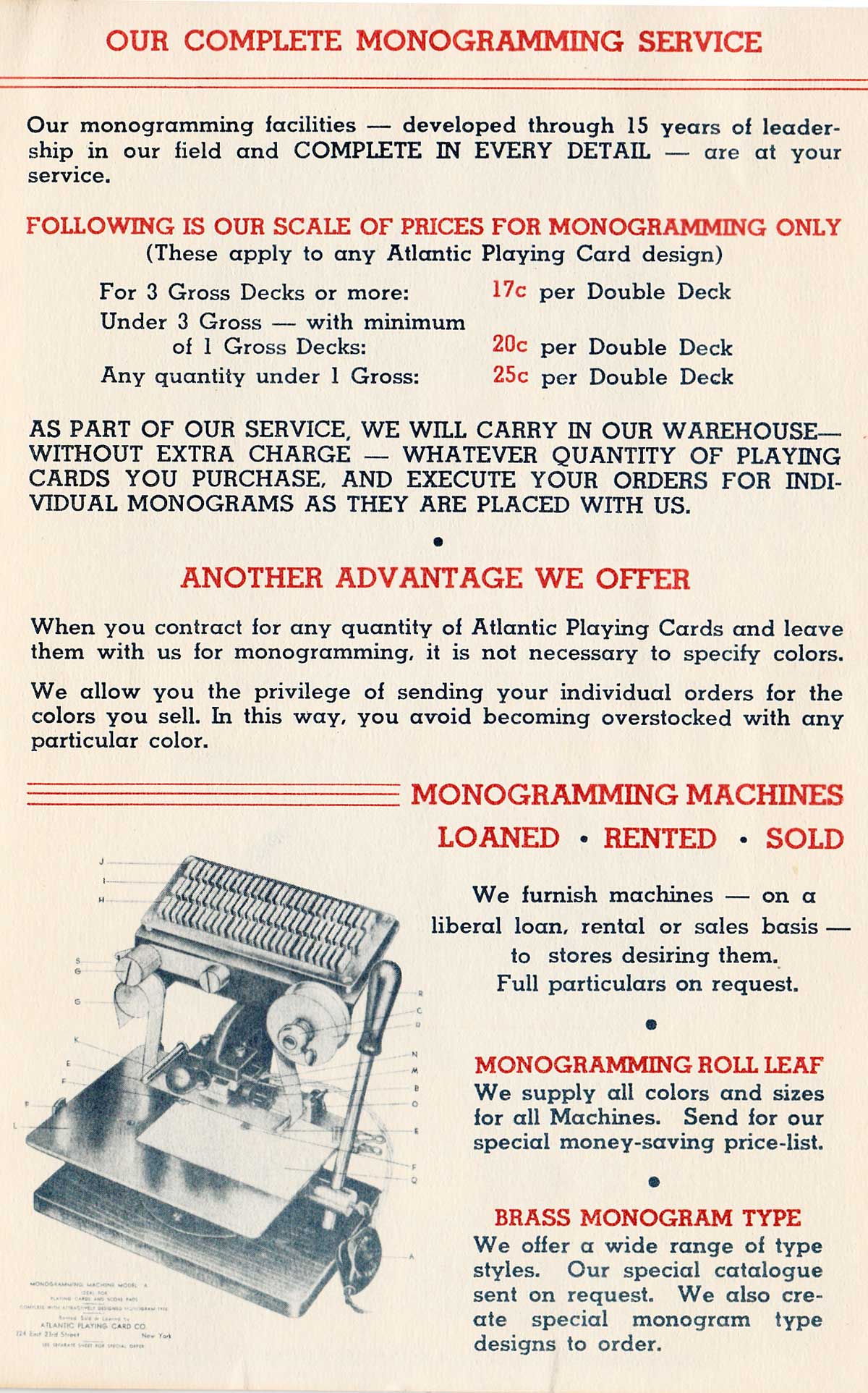 Above: details of sales promotion aids and the monogramming service. 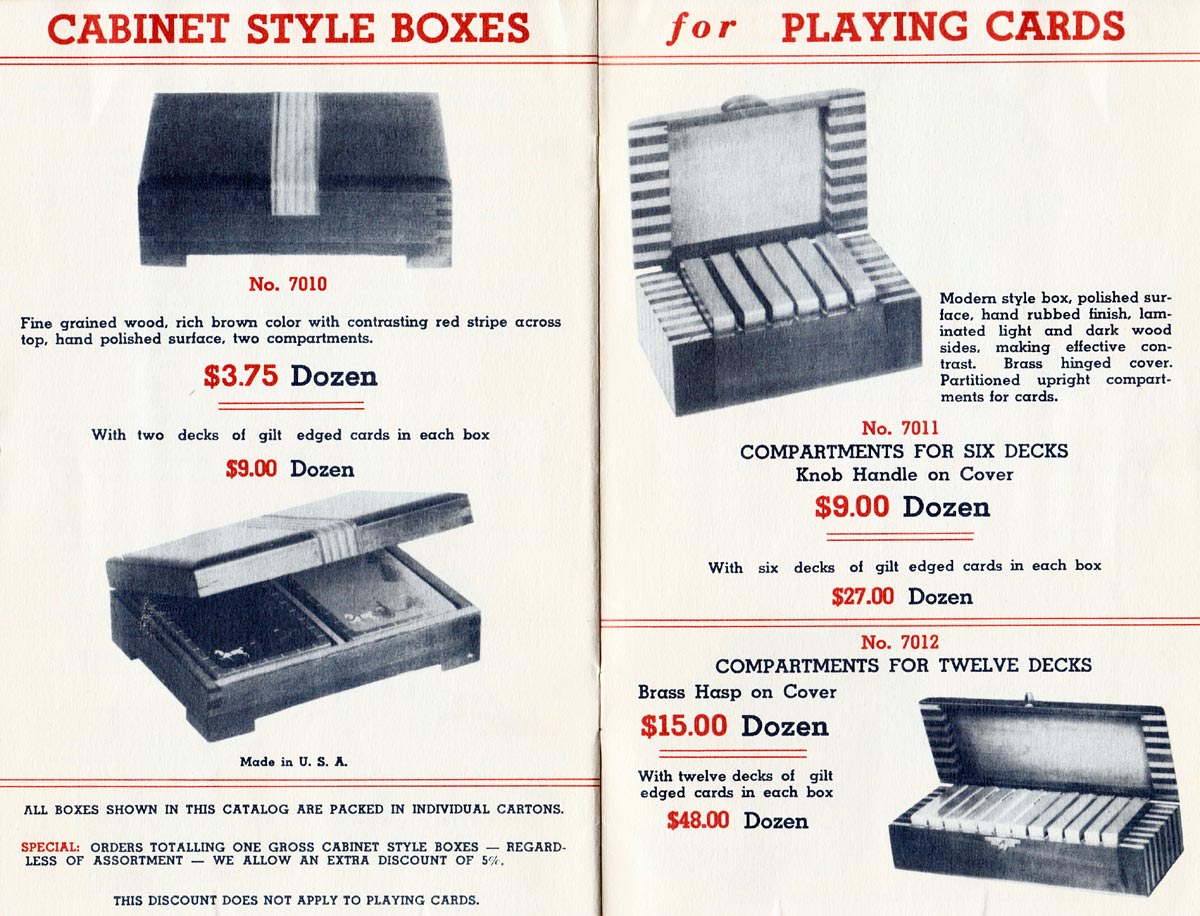 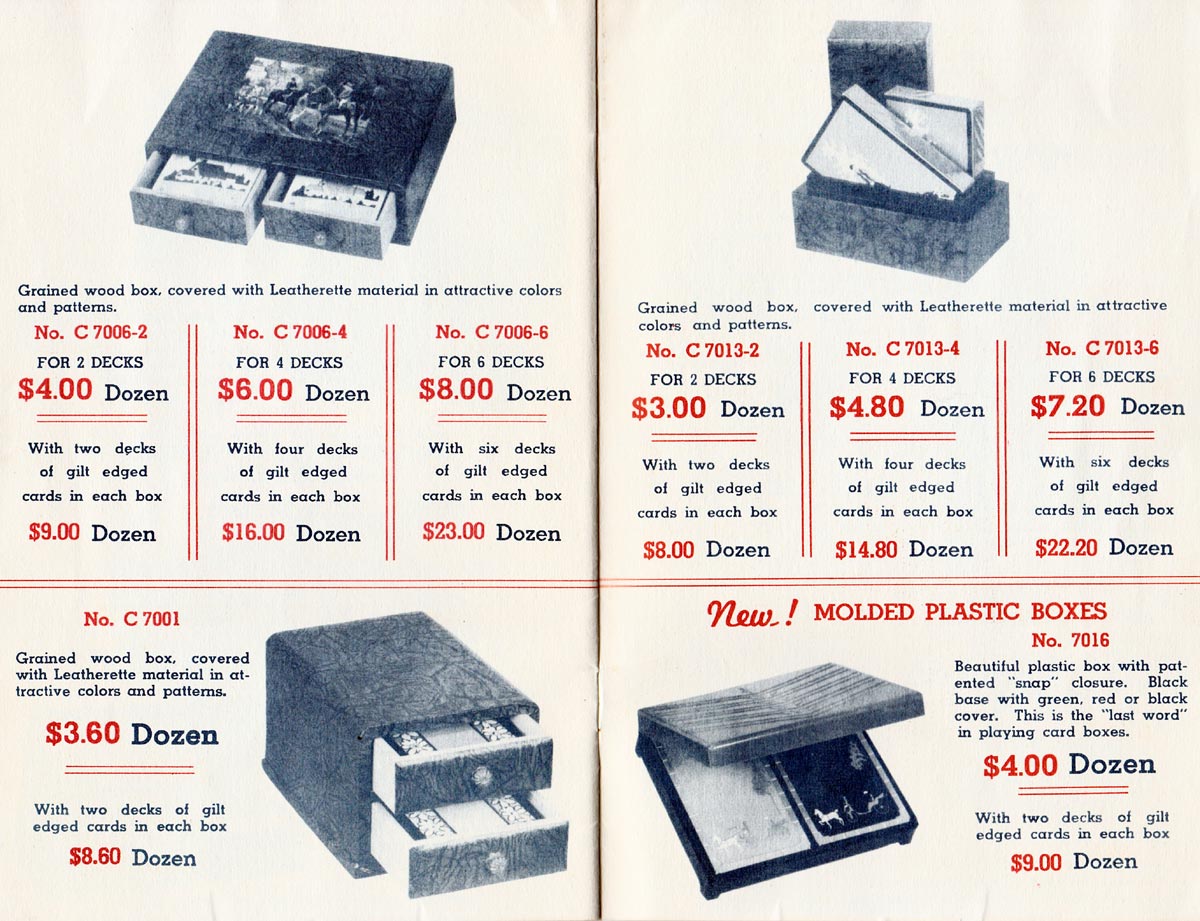 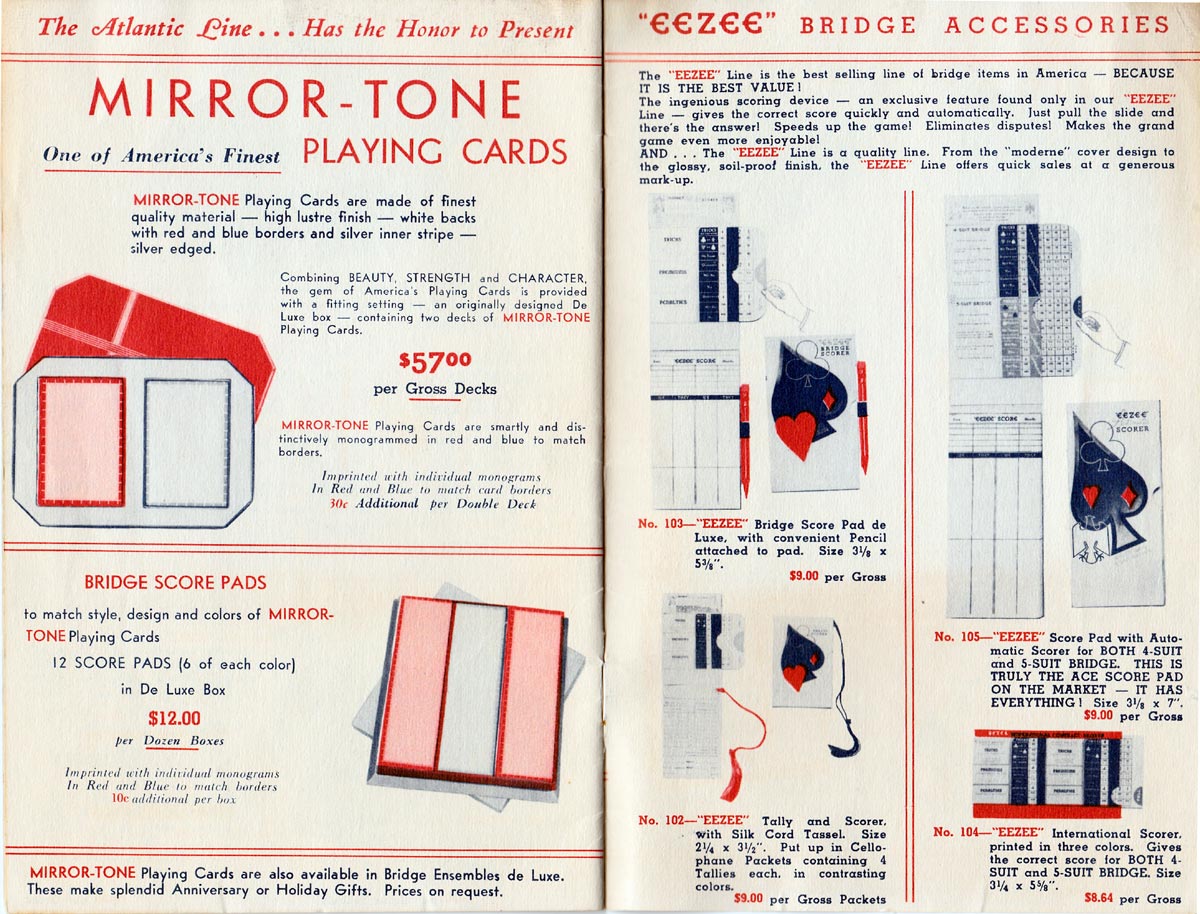 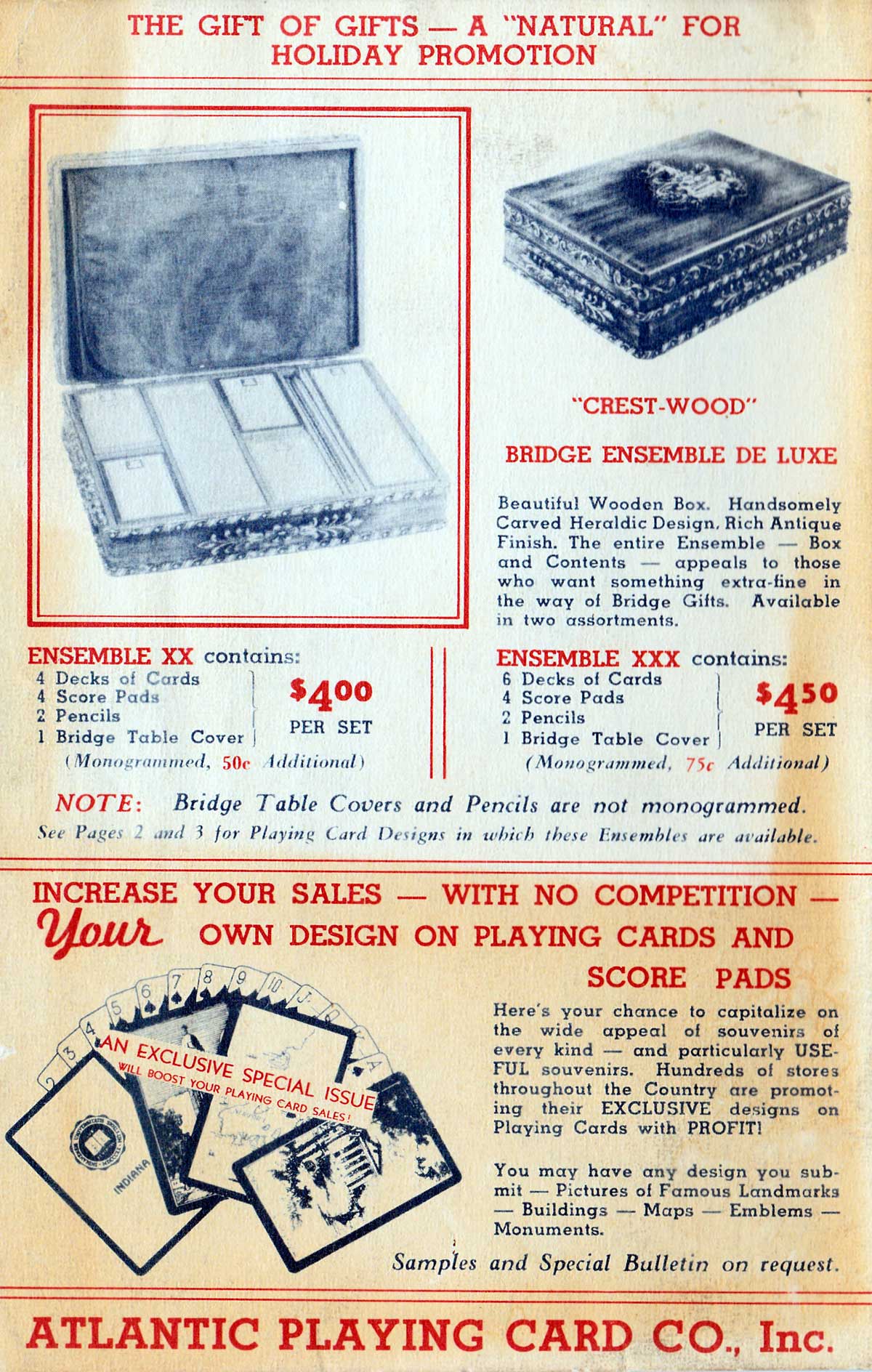 Above: trade catalogue from the 1920s or ’30s. Images from the collection of Rex Pitts.

Thanks to Rod Starling for additional research. The label (right) is from Piatnik’s Baroque costume deck, sold as “Kingsbridge” (c.1950), and the box clearly identifies Atlantic as the exclusive distributor in the U.S.A. (Click to zoom)