These decks were produced in various grades for the German immigrant population and feature the German eagle and the German and American flags intertwined. There were two versions: one with German faces and one with American faces. 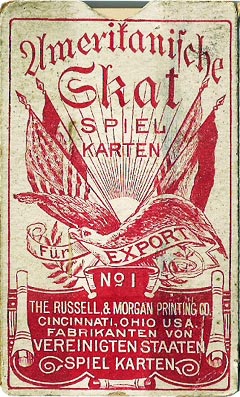 German-style ‘American Skat’ playing cards were first manufactured by the Russell & Morgan Printing Co., Cincinnati, USA, in 1889. These decks were produced in two grades (unenamelled Skat #1 or double-enamelled Skat #2) for the German immigrant population. The designs feature the German eagle and the German and American flags intertwined on the box and reverse. There were two versions: one with German faces (after Wüst's designs) and one with American faces which contained 52 cards and a Joker (Skat #3 & #4). More or less identical ‘Gaigel’ versions followed soon after.

American manufacturers seem to have been attentive to the local immigrant populations (German, Spanish) but also with an eye on possible exports overseas as noted on the box (right). Theatre programme in the form of a pack of cards. East Germany, c.1967.

Hunters, animals and birds feature on all but the Kings in this pack by Theodor Wegener, c.1863-70.

This miniature pack is very similar to one made by C.L.Wúst in c.1890.