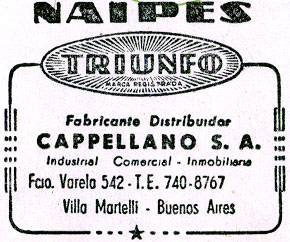 Above: the design of the logo and the details printed on the Four of Cups changes over the years. In the earlier example shown below there is a second telephone number. 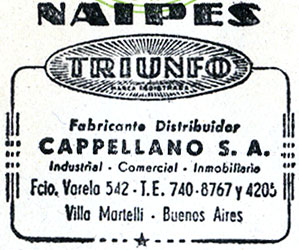 Cappellano's business activities are described as ‘Industrial, Comercial, Inmobiliaria’ on the Four of Cups, and the address is given as Fcio Varela 542, Villa Martellí, Buenos Aires and the telephone number is T.E. 740-8767. The second telephone number is missing, presumably due to a change in the business. At the same time, the outlines of some of the card designs have been re-drawn.