Since the end of the monopoly of the Real Fábrica de Naipes de Macharaviaya (Spain) in 1815, there have been a number of importing agents, as well as manufacturers from other countries, who have imported playing cards into Argentina. In general, and until 1968, these packs will show the Argentinean importation tax stamp "Impuestos Internos" on the ace of hearts for Anglo-american style decks, or on the four of cups in Spanish-suited packs, as illustrated in the examples shown below.

Above: "No.9352 Squeezers" manufactured by Consolidated Dougherty Card Co Inc., New York, for export to Argentina. The ace of hearts features three orange "Impuestos Internos" tax stamps instead of the usual one, and a small overprint 'Naipes Lavados'. This refers to the practise of refurbishing used decks which were then taxed for a second time. The importer's name Casa Bertrand Domec is overprinted on the ace of hearts. Similar packs were also imported into England by Mudie & Sons. 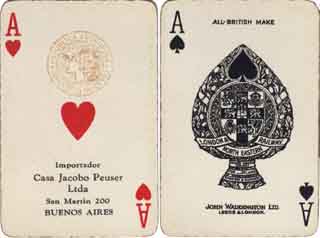 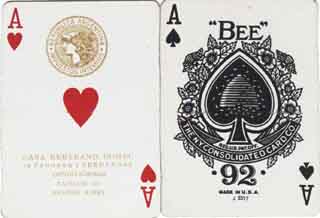