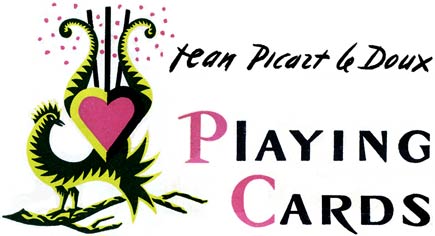 Issued in 1957 on the occasion of the First International Playing Card Week, hosted by De la Rue in London to celebrate the company's 125th anniversary. Artists from several countries had been invited to submit designs for new court cards. Those submitted by Jean Picart le Doux, the famous French tapestry designer, were chosen as the most attractive and outstanding. The set features designs carried out in richly toned colourings typical of the tapestries which Picart le Doux designed for Aubusson & Gobelins. The box (detail shown left) bears a version of the Ace of Hearts which takes the form of a Love Bird. The court cards of the Spades Suit are inspired by maritime ideas and have a recurring theme of the trident. Star fish decorate their clothes. The Ace of Spades is formed by two dolphins supporting the trident with their tails.

One of the striking features of the pack is the interesting treatment of the index figures showing the value of the cards and the carefully conceived layout of the suit symbols. Picart le Doux playing cards were first offered for sale through retail stores at 25 shillings per double pack from 8th October 1957. 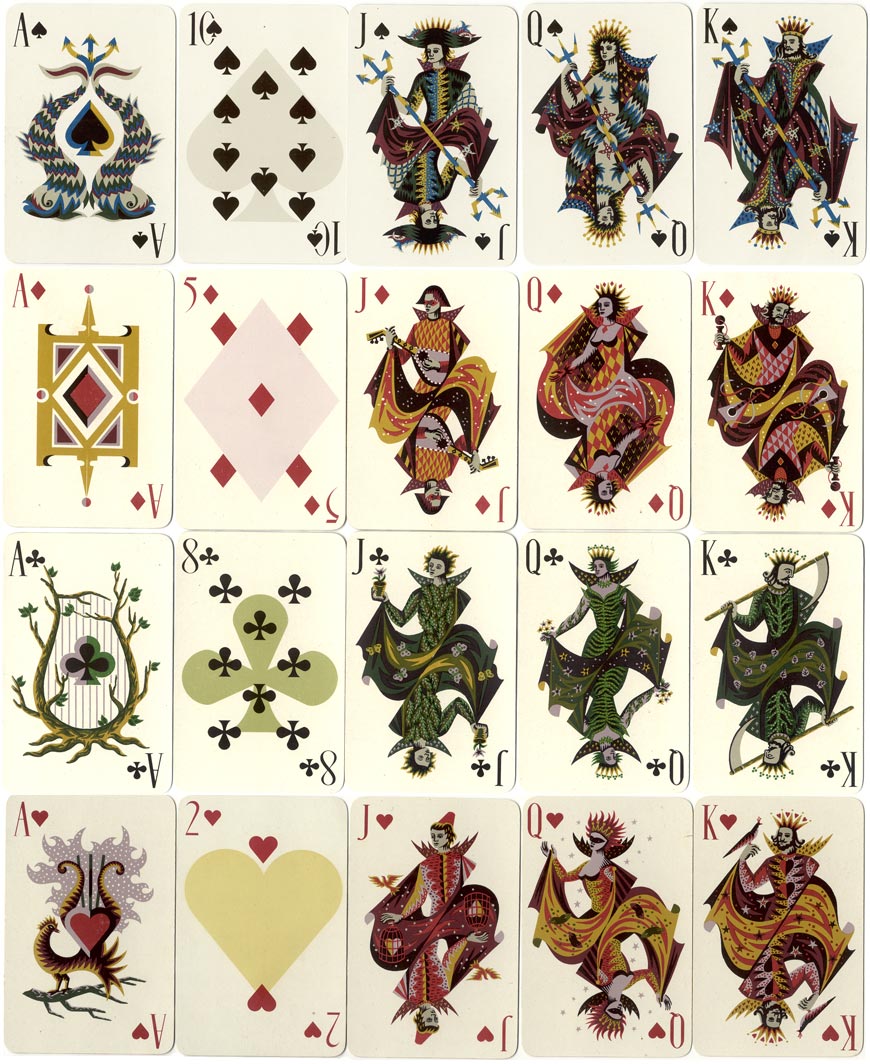 Above: Playing cards specially designed by Jean Picart le Doux for Thomas De La Rue and Company's 125th anniversary, 1957. The card faces are printed in fourteen different colours; the backs in four colours. The carefully conceived layout of the suit symbols gives the cards an appearance of supreme elegance and charm. The Diamonds suit cards are inspired by the troubadours and other characters of mediaeval romance: the masked knave is shown playing a lute. For the court cards of the Club suit Picart le Doux has sought his inspiration in scenes of the countryside. The King is shown bearing a scythe and flowers; leaves and butterflies are used as decoration on all the court cards. The court cards in the Heart Suit, notable for their grace and flowing lines, are based on portraits of mediaeval fowls. The bird theme which occurs on the Ace of Hearts in the form of a Love Bird bearing an ardent heart on its back is repeated on the King and Knave. The Knave is depicted as holding a cage from which the Love Bird has escaped but which still holds a captive heart.

Above: the Joker, extra card, back designs and the control slip giving De La Rue's address as De La Rue House, 84-86 Regent Street, London W.1. This was De La Rue's office in London; the cards actually would have been printed by Waddington's at 40 Wakefield Road, Leeds 10.