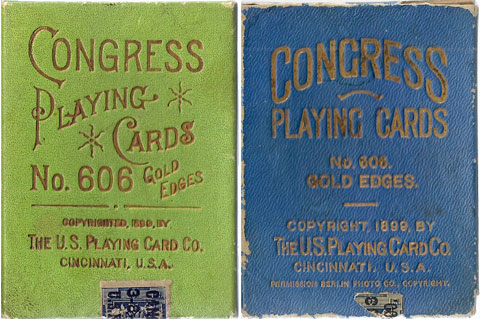 Congress Playing Cards were first produced by the Russell & Morgan Company in 1881 as the finest and most expensive of their brands. Decks came with lavish backs and gold edges. The principal features, of course, are the artistic back designs, Jokers and decorative Aces of Spades. There were often several versions of each back. The court cards are all standard. From around 1900, back designs were named in small gold letters at the bottom of the card back. In 1927 the wide-sized cards were discontinued and narrower decks were produced for the games of Bridge and Whist which were growing in popularity.

Above: Congress No.606 deck titled “Moon Fairy” by U.S.P.C.C, 1899. This fine Ace of Spades was used on higher quality, gold edged editions which are relatively rarer to find. There were other versions of this back issued around the same time with a different border or a black background. Images courtesy Rod Starling.

Above: Congress No.606 deck titled “Diana” by U.S.P.C.C, 1899. There was at least one other version of this back design issued around the same time. Images courtesy Rod Starling.

Above: two slightly different versions of Congress No.606 decks titled “Good Night” by U.S.P.C.C, 1899. One girl has brown hair, the other is blonde. Images courtesy Rod Starling. 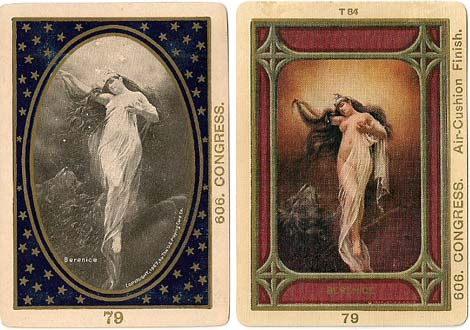 This particular deck, “Berenice” is taken from a work by the Spanish artist Luis Ricardo Falero (1851-1896) who specialized in female nudes and mythological and fantasy settings. Falero had a particular interest in astronomy and incorporated celestial constellations into many of his works. This particular design illustrates a legend about the hair of Berenice, which tells how the constellation Coma Berenices was formed. The card company did actually issue decks with variations of the picture, some sample cards are shown (left) which might have been less risqué by veiling the full nudity. Images courtesy Rod Starling.

Above: Congress No.606 deck titled “Moorish” by U.S.P.C.C, c.1903. Like most of these old, wide named Congress decks, this one is quite rare. Around this time USPCC started using either a named Joker or the 'Capitol' Joker, as in the next example. Several different versions of the Ace of Spades were used over the period 1899-1922. Images courtesy Rod Starling.

Above: Congress No.606 deck titled “Spinning Wheel” by U.S.P.C.C, 1908. A slightly heavier typeface is used for the corner indices. This particular deck was also used as an advertising give-away for Jewell Belt & Hook Co. Congress decks used for advertising are unusual. Images courtesy Rod Starling. 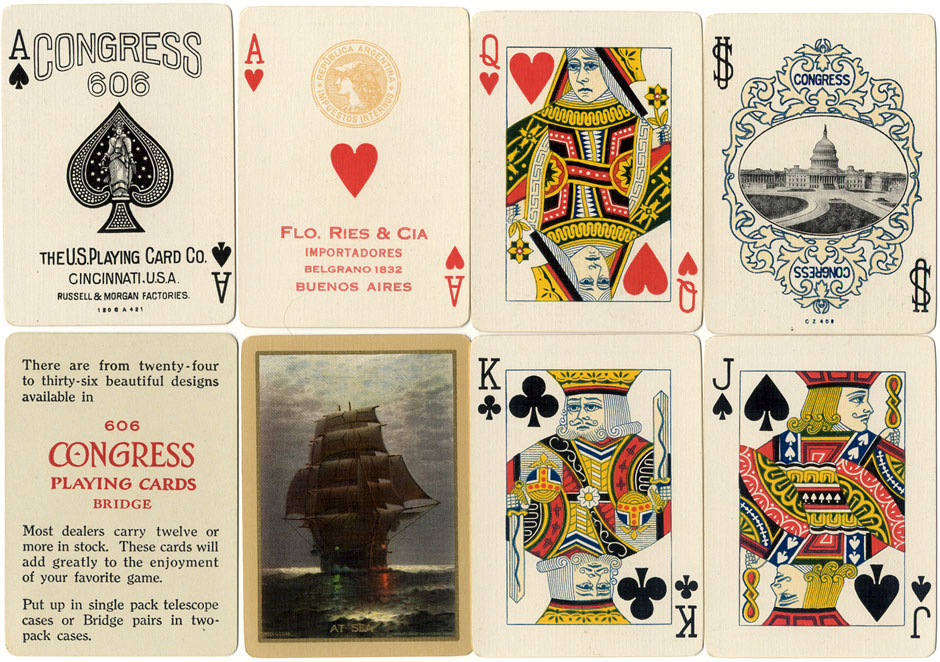 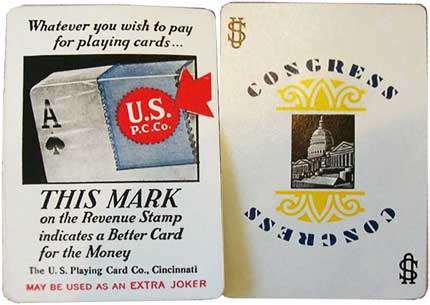 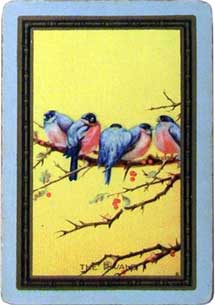 Above: cards from wide-sized deck of Congress No.606 playing cards, manufactured by USPCC, with a named "At Sea" back design, c.1915. The 'Congress' Joker (top right) was one of the most common of the early USPCC Jokers and it was redesigned at various times (see example right, 1930s). The deck shown above was imported into Argentina by the agent Flo. Ries & Cia, Buenos Aires whose details are overprinted on the Ace of Hearts, along with the Argentinean importation tax stamp.

As the games of Bridge and Whist became more popular during the 1920s the earlier wide-sized decks were phased out in favour of narrower cards and a large number of beautiful back designs continued to be published over the years. 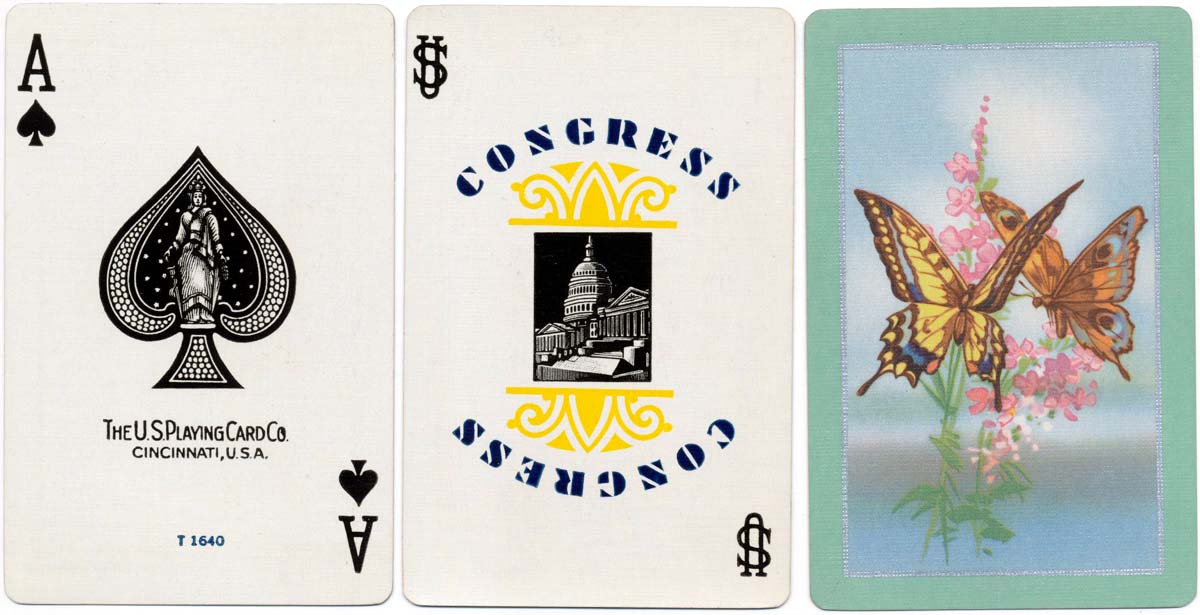 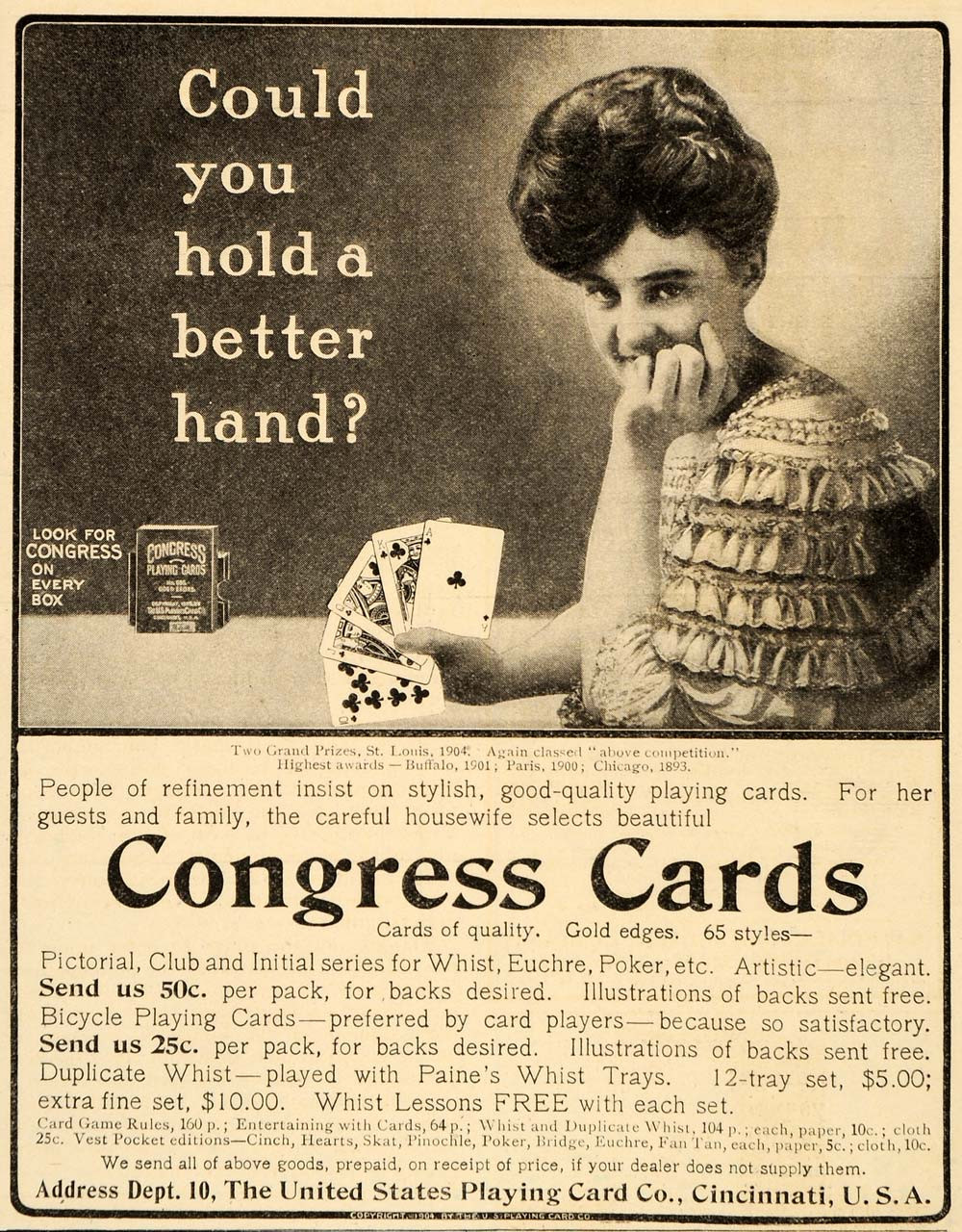 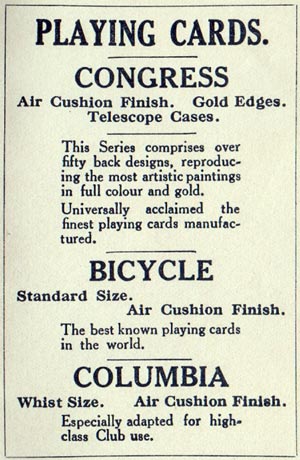