The distinctive Ace of Spades features the Statue of the Goddess of Freedom, based on the bronze statue designed by Thomas Crawford (1814-1857) that, since 1863, has crowned the dome of the U.S. Capitol in Washington, D.C.

The distinctive Ace of Spades features the Statue of the Goddess of Freedom, based on the bronze statue designed by Thomas Crawford (1814-1857) that, since 1863, has crowned the dome of the U.S. Capitol in Washington, D.C. The Aces and Jokers usually also contained elaborate and picturesque engravings. Other new brands followed shortly, including: 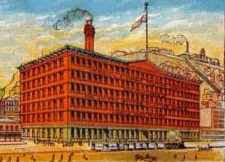 In 1885 the business was renamed as “Russell & Morgan Printing Company”, as seen in the calendar page (right).

In 1891 the company name was changed yet again to “The United States Printing Co.” and then in 1894 “The United States Playing Card Company” was incorporated to hold all the playing card manufacturing operations. This sequence of events can be followed in the inscriptions on the Aces of Spades in successive editions of their playing cards. 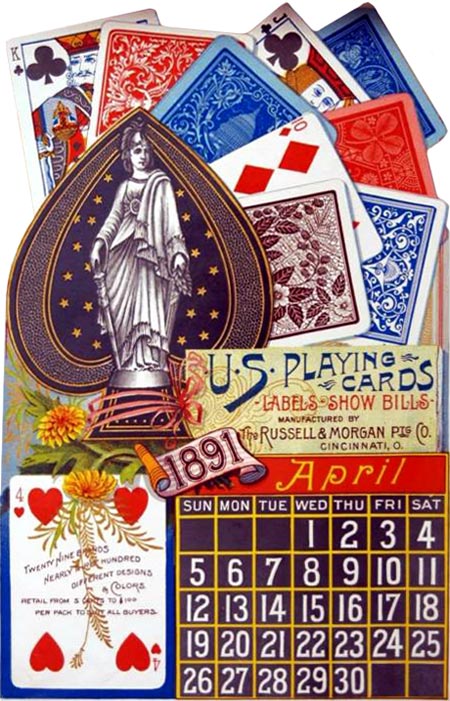 Above: “Tigers No.101” playing cards manufactured by Russell & Morgan Co., Cincinnati, c.1881. The cards have a generic R&M Ace of Spades (without any brand name or tiger image), full-length courts and corner indices.  See more →

Above: 'Skat No.1' German-style playing cards manufactured by the Russell & Morgan Printing Co., Cincinnati, USA, c.1889. These decks were produced in various grades for the German immigrant population and feature the German eagle and the German and American flags intertwined.   See more →