Above: playing-card wrapper made in Belgium by Glénisson for export to Chile.

Early Chilean playing cards were based upon Spanish models imported directly from Spain or else, during the eighteenth and nineteenth centuries, from Italy  (see more →). The Chilean printer Gandarillas emigrated to Argentina and in 1815 produced cards there based upon the Spanish National pattern. It is not known whether he published more cards on his return to Chile in 1817. Likewise the Italo-Chilean printer Quercia y Possi also set up business in Buenos Aires in 1815, producing a pack based on newer Spanish designs of the day.

Right: playing-card wrapper made in Belgium by Glénisson for export to Chile.

During the late nineteenth century Belgian playing cards were exported to South America (including Chile) by Glénisson, Van Genechten, Brepols & Dierckx and others. Playing cards recovered from the saltpetre workers from Northern Chile include a number of decks imported from Italy and Spain.   See images →

During the 1930s the Cía Chilena de Tabacos issued Spanish-suited and Anglo-American style packs. Local manufacturers and distributors such as Santiago Ruiz y Cía, Naipes Mapocho, Imprenta y Litografía Universo S.A (Sonia and Siluv), Hugo Castro and Taller Fotolitográfico have produced packs based upon Spanish models, such as the Cadiz pattern, Fournier's 'Castilian' design or a South American version of the Spanish Catalan pattern also found in Argentina and Uruguay. Several other advertising packs have been seen, such as for Mamiña Mineral Water and Ibici stockings and many are now produced in China.

A playing-card tax band is shown below, and several of these were wrapped around the boxes of packs to make up the required amount of duty. Further details of dates and tax amounts are not currently available.

Left: tax band from Chilean playing cards, which was wrapped around the box as shown in the example below.  See also Peter Endebrock's Taxes and Tax Stamps on Playing-cards

Above: box and four cards from “Naipes Español Copihue” 40-card Spanish-suited deck with a colour photograph of Chilean Huasos dancing on the box, probably for the Chilean market made by Cia Paulista de Papéis e Artes Gráficas, Rua Piratininga 169, São Paulo. All the inscriptions are in Spanish and the Copihue is the national flower of Chile. (Click to zoom). 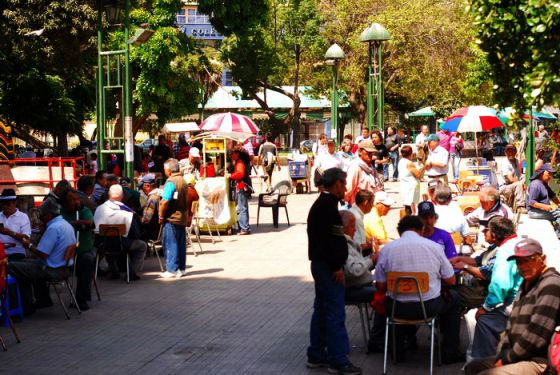