Italian cardmakers enjoyed lucrative trade manufacturing Spanish-suited cards for the Spanish-speaking world including South America. The variant of the Spanish National pattern shown here, known as the Money Bag pattern, is so-named bacause the Sota of Coins carries a money bag in his right hand. Whilst retaining most of the characteristics of earlier designs, it has several idiosyncrasies which differentiate it. The Ace of Coins has a central disc enclosing an eagle with the arms of Spain, with baroque cartouches above and below which read “Pedro Bosio Estanquero In Ghenova”. As in earlier models, the Five of Coins features the facing profiles of Ferdinand and Isabella, and the Four of Coins has a six-pointed star which contains the initials P.B. This derivative of the Spanish National pattern seems to have had a history outside of Spain itself and this example, originally produced in Italy, has come to light in a Chilean collection. 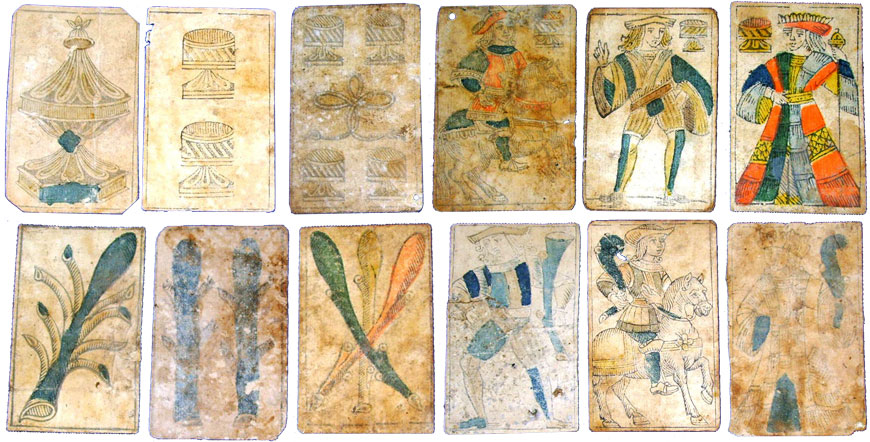 Above: cards manufactured by Pedro Bosio, Genova (Italy) during the 18th century and probably for export to Spain, the Philippines or South America. The Ace of Coins has the arms of Spain. The design corresponds closely to the Spanish National pattern, and specifically to the variant known as the ‘Money Bag’ type owing to the Jack of Coins holding a money bag (top row). The cavalier of cups lacks the usual inscription of ‘Ahí Va’. The cards are printed from woodblocks and hand-coloured using stencils. The backs are decorated with a pattern of ermine spots in black.