During the nineteenth century playing cards were being produced in Dublin, Cork and Limerick.

Not a lot is known about the early history of playing cards in Ireland, but during the nineteenth century playing cards were being produced in Dublin (John Young), Cork and Limerick. From the surviving specimens these were crudely drawn and the court cards often turned the wrong way for no apparent reason. During the twentieth century the Irish Playing Card Manufacturing Company (Cork) and The Ormond Printing Co. Ltd (Dublin) were producing cards for the Irish market, and subsequently there have been advertising, tourist souvenir packs and also art and design packs manufactured in Ireland and abroad.

It is enjoyable to recognise traces of Celtic decorative patterns in Irish playing card designs. Formerly the Celts inhabited central and western Europe long before the Christian era but ultimately they were confined to Ireland, Scotland, Wales, the Isle of Man and Brittany.

The Celts loved personal splendour and self-display as well as fighting. Surviving examples of their art include shields, swords, manuscripts, metalwork, jewelry, poetry and literature. Irish playing card designers often take their inspiration from these sources.

Above: Playing card designs based on motifs from early Irish manuscripts and metalwork   See more → 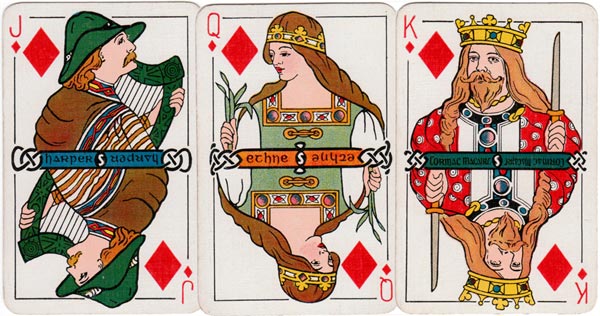 Above: Souvenir playing cards published by C. T. Co. Ltd, Dublin, c.1950s. Several editions of these cards are known, with either green or orange coloured backs.

Lovely Day for a Guinness

Celtic Myth playing cards are the third and final set of cards in a series based around the themes of Celtic mythology and society.

A set of cards to help bring awareness to old and infrequently used languages, created by E Brewstein. Each card in the pack also functions as a mini language lesson, great for playing games and also learning about Irish heritage.

Feardiadh at the Ford jig-saw

Feardiadh at the Ford jig-saw book with illustration by Kathleen Ennis, c.1940.

Art:Pack in aid of the Irish Hospice Foundation

A deck of cards to raise awareness of the Irish Hospice Foundation.

Catherine Kelly, M.A. Paint and Print, B.A. History of Art and Fine Art Painting, is an artist working in Dublin

The costumes and details of this pack are in the spirit of "The Heroic Period of Irish History".

Playing card designs based on motifs from early Irish manuscripts and metalwork.

During the nineteenth century playing cards were being produced in Dublin, Cork and Limerick.