This is an ongoing research project in collaboration with Samten de Wet, who initiated the discourse.

The “Sola-Busca Tarocchi” contains seventy-eight engravings that make up a remarkable set of illuminated tarot cards, the earliest known complete example as well as the earliest known engraved set. The 22 canonical arcana are replaced by historical and mythical people recalling antiquity, such as Nimrod, Nebuchadnezzar, etc. Heroes of antiquity were in fashion, and each of the 16 court cards also has an ancient name, while the minor cards are pictorial. This deck is believed to have inspired the whole pictorial concept of the Rider-Waite-Smith tarot.

The “Sola-Busca Tarocchi” are named after the Milanese family, Sola-Busca, that once owned a complete set that is now in the Pinacoteca di Brera. A number of incomplete sets also exist in other collections. Although several attempts have been made, alas, the identity of the Sola-Busca Master has not been positively established, yet he (or she) remains one of the more intriguing, but elusive, North Italian artists of their day.

The Sola Busca tarot did not produce any further manifestations of its iconological programme. It was a one-off operation. The root sources can be found in the literature and the esoteric codings are a part of Western esotericism. Although the divinatory aspect of tarot didn't became popular until the 18th century, alchemical, esoteric and hermetic currents appears in some earlier tarocchi decks, such as this one, as well as in the visual and performing arts. 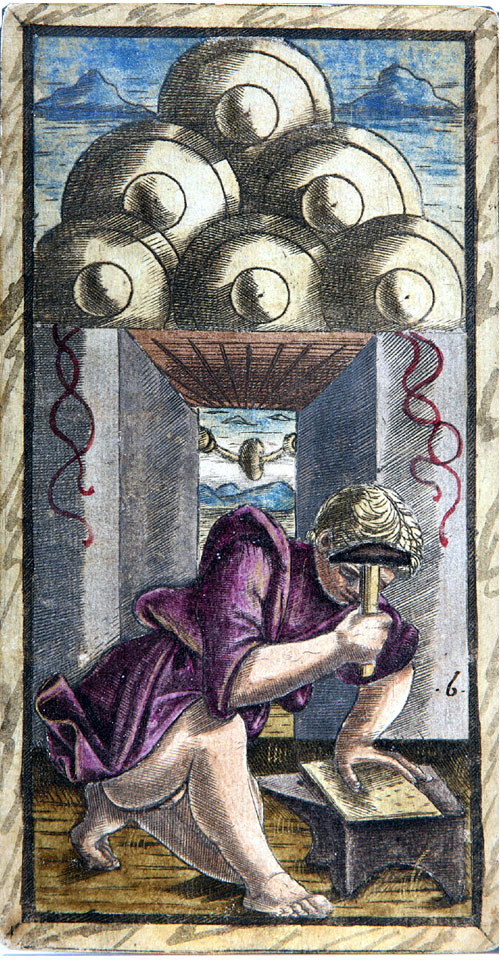 In her book ‘An Introduction to Western Esotericism’ [Edwin Mellen, 2008] Nadya Chishty-Mujahid posits that the Sola Busca tarot could have constituted a mutus liber of esoteric initiation for a secret society such as Pomponio Leto’s Roman Academy. When placed in circular formation the 22 major arcana of the deck display a distinct ritualistic pattern whereby a novice undergoes ritual initiation in order to become a fully tried and tested member of the society. Chishty-Mujahid examines how, when placed in this form, the arcana may definitively be viewed as a type of animated sundial form, with the changes from day to night being clearly delineated and displayed. Since the element of fire is a prevalent one in these major arcana [which show the initiate becoming accomplished in the use of fire and the ability to control it] it is likely that this deck represents figurative illumination; hence the society for which it was used was probably an early form of what later came to be known in Europe as the Illuminati.

Above: the four of cups with large urns and the artists's distinctive style of nudes. The background landscapes feature low, rounded hills with oddly-shaped trees, often with birds perched in them.

Right: an uncoloured and painted version of the knight of swords, depicting a semi-naked man on horseback wielding an enormous sword, with a scabbard hanging from his waist; a barren, stumpy tree behind.

The artist's sharp and lively lines are often overshadowed by the painting. 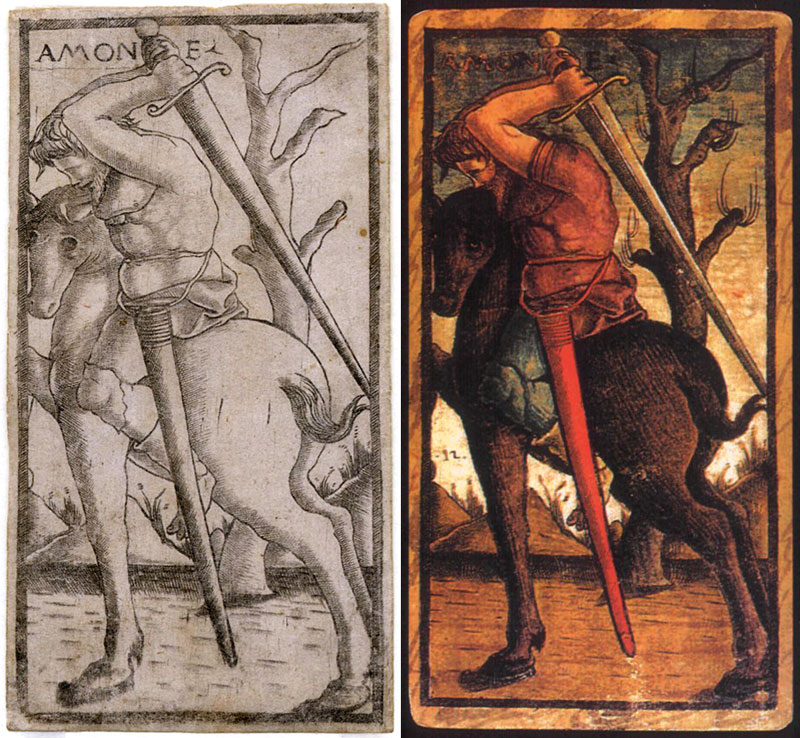 In an article published on the Pinacoteca di Brera website, the author writes “through a decipherment of these images, the [Sola-Busca] deck has been shown to provide a vivid reflection of the kind of alchemical and Hermetic knowledge so dear to the Humanists.” Later in the same article, we read about a “process of inner regeneration that sets out from the exemplars of Illustrious Men of Antiquity, and of contemporary men whom players at the time would no doubt have recognised, and proceeds through various degrees of knowledge – acquired by means of direct enlightenment in a master-pupil relationship.”

Joscelyn Godwin (2002), writing about the so-called Tarocchi di Mantegna, discusses “mapping the hierarchy of being” and “the journey and fate of the soul after death, as taught by Hermetic and Neoplatonic philosophy”. When the soul possesses all the virtues, it is ready to break free of earth and start its ascent through the spheres of the seven heavens. He concludes with “I leave it to others to press these parallels further, in the hope of cracking the code of the Tarocchi — if there is such a code”.

The Game of Saturn: Decoding the Sola-Busca Tarocchi

In his book “The Game of Saturn: Decoding the Sola-Busca Tarocchi” [Scarlet Imprint, 2017], Peter Mark Adams describes how “by the systematic use of ambiguity in the spelling of names and the presence of symbolic counters that point towards deeper, occulted levels of meaning”, the Sola-Busca tarocchi camouflages its true significance as a sequence of ritually themed cards depicting the stages in a pagan theurgical rite.

To illustrate these ideas in his own words, Peter has provided two excerpts from his book and also a podcast interview with Gordon White which was published on 5 Apr 2017:

In spite of the vast trove of research and opinion on the origin of the Tarot, no conclusive evidence has been reached as to who designed the matrix of the “Major Arcana”. Ordinary playing cards probably pre-date the set of 22 trionfi which were added to the tarot deck, yet their enigmatic and striking imagery can be traced back many centuries. Perhaps they represent things that the soul must acquire or master before it is fit to start on the heavenly ladder. This leads us to keep on seeking answers to the question Who had the original vision for the Tarot?

Chishty-Mujahid, Nadya: An Introduction to Western Esotericism: Essays in the Hidden Meaning of Literature, Groups, and Games, Edwin Mellen Press, 2008

Godwin, Joscelyn: The Pagan Dream of the Renaissance, Thames and Hudson, London, 2002