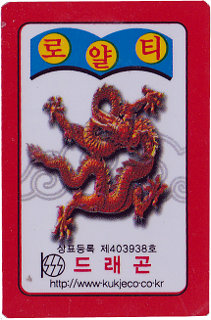 Hwatu cards are the Korean version of Japanese Flower Cards with red backs. The cards came over to Korea when the Japanese occupied it during 1905-1945. The locals took to this game swiftly and before long an idiosyncratic local version appeared. The differences between the Japanese and the Korean decks are slight, mainly in the colouring of the cards which is very vibrant.

Right: one of the bonus cards has a URL on it which leads us to this website: www.kukjeco.co.kr
There is a bright green, plastic box plus a sheet of paper with more Hangul on it.

The cards are printed on thick, red plastic, instead of the laminated board (with turnover edges), used in Japan. On some of the cards you will notice the word "光" meaning ‘bright’, used to identify certain high scoring cards, a feature absent in the Japanese one. The ‘moon’ card of the month of July (top row, 3rd from left) has the maker's name in the ‘moon’. The deep purply blue used in the Japanese cards has been replaced with a light blue in the Korean ones. The deck has an extra 6 cards, used as bonus cards.   more info → 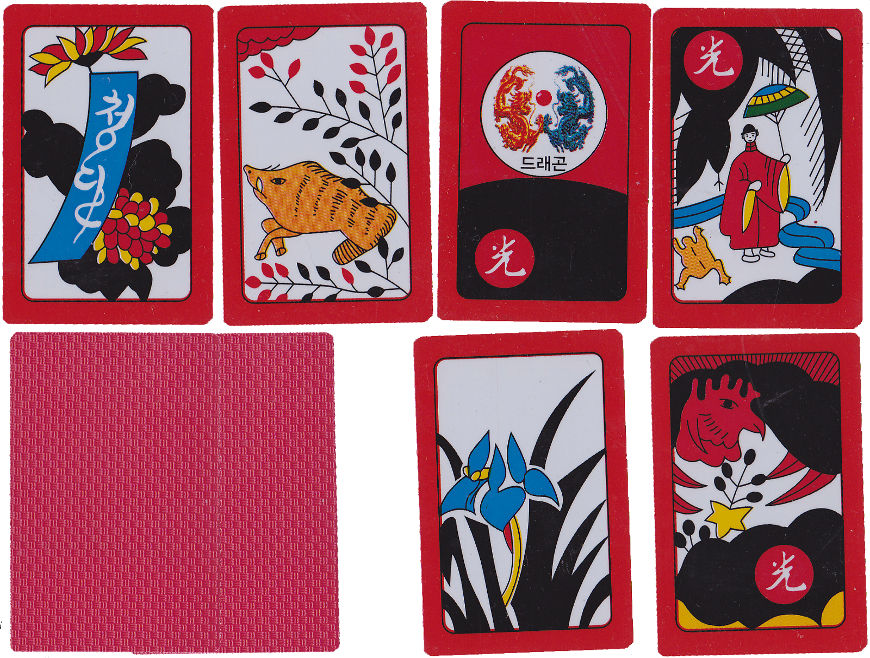 Above: ‘Hwatu’ - Korean Flower Cards distributed by Kukje Co,. manufacturer unknown. Primarily the same as a Hanafuda deck, i.e. 48 cards, divided into twelve suits each named after flowers or plants during a month of the year; each suit contains four cards, one for each season. Japanese Hanafuda comes in a version with red backs, this version being presumably copied by the Korean makers (down to the imitation turnover edges!) Image by courtesy of Anthony Lee (anthonylesq.blogspot.com)