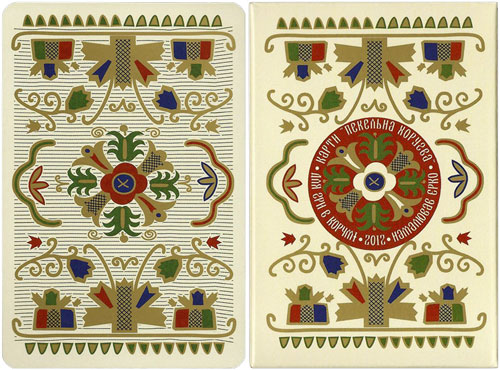 “Pekelna Horugva” is the second deck designed by Ukrainian illustrator Vladislav Erko, manufactured by Nage Cards, Saint-Petersburg, 2012. Vladislav Erko is noted for his beautiful artwork in children’s fairy tale books, as well as his earlier deck for “Taras Bulba” the Moscow restaurant which serves traditional national cuisine. In this second deck, which also contains some culinary references, the imagery has turned rather grim and appears to be based on the mystical works of Nikolai Gogol expressing ethnic and nationalist themes, including death.