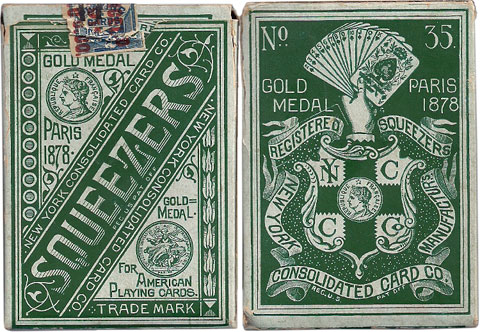 By 1877 the New York Consolidated Card Co's “Squeezers” were a great success on account of little indices in the corners which enabled the cards to be held in a fan, or ‘squeezed’. The only competition came from the Andrew Dougherty Co., who were making their own patented ‘Triplicates’ with miniature cards in the corners instead of numbers, and then ‘Indicators’ with index numbers, which could also be ‘squeezed.’ A tacit understanding between the two about sales territory was established, so that the one company would not have to compete with the other. In this way by the late 1870s indices came into common use on English and American cards. 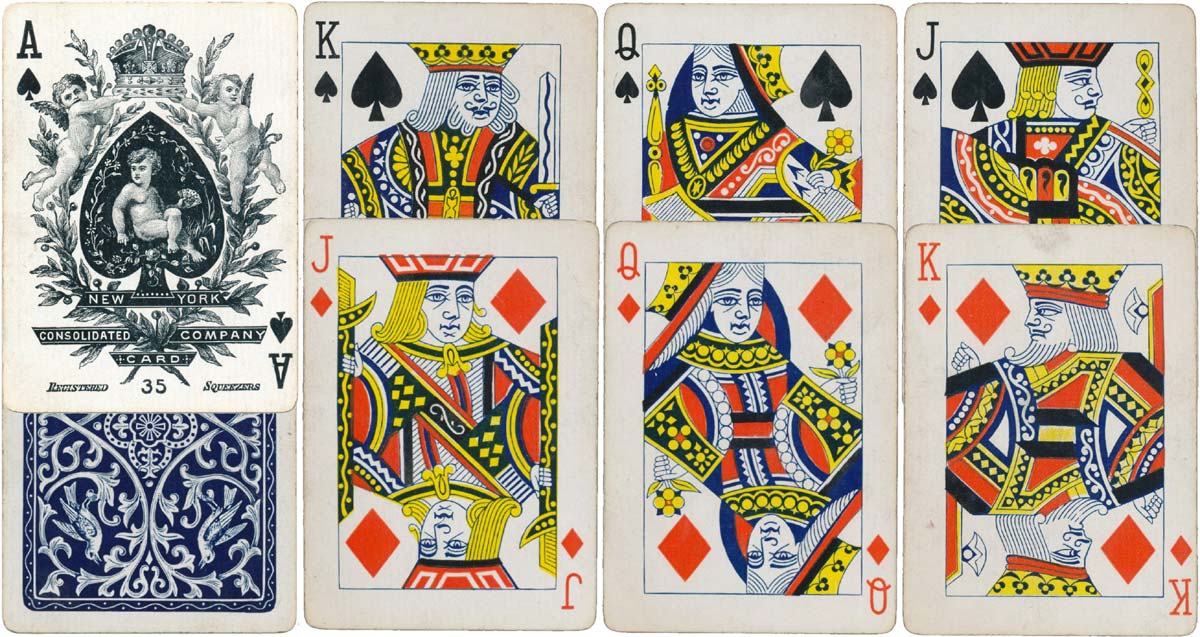 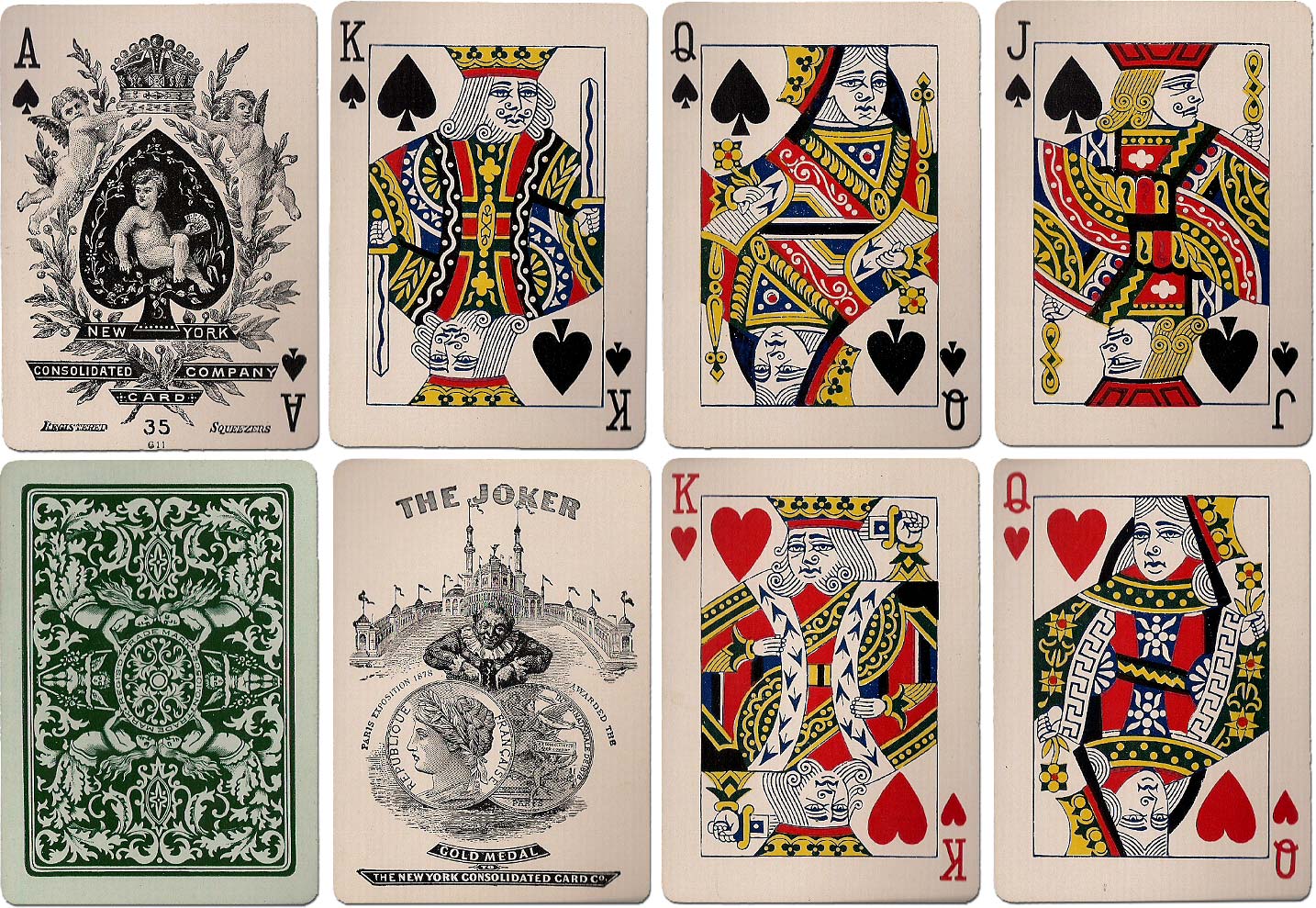 Above: Squeezers No.35, c.1915. Several versions of the Ace of Spades are known, this example has the legend "Registered Squeezers" and the number 35 at the bottom. The brand usually comes with the 'Gold Medal Joker' as shown here, but the earliest editions had the 'Best Bower'. However, the central cherub on the Ace was soon replaced by a wreath, and the outer images were also replaced. The box is shown above. Images courtesy Rod Starling.

In an historic pact the two manufacturers (Dougherty & NYCCC) divided the country between themselves as a means of eliminating outside competition. To honour this agreement, NYCCC issued a ‘Squeezer’ deck with a back design showing two dogs, Squeezer and Trip, chained to their respective kennels with a caption “There is a tie that binds us to our Homes”. Note the differences in the Ace of Spades and Joker and the re-drawn courts. 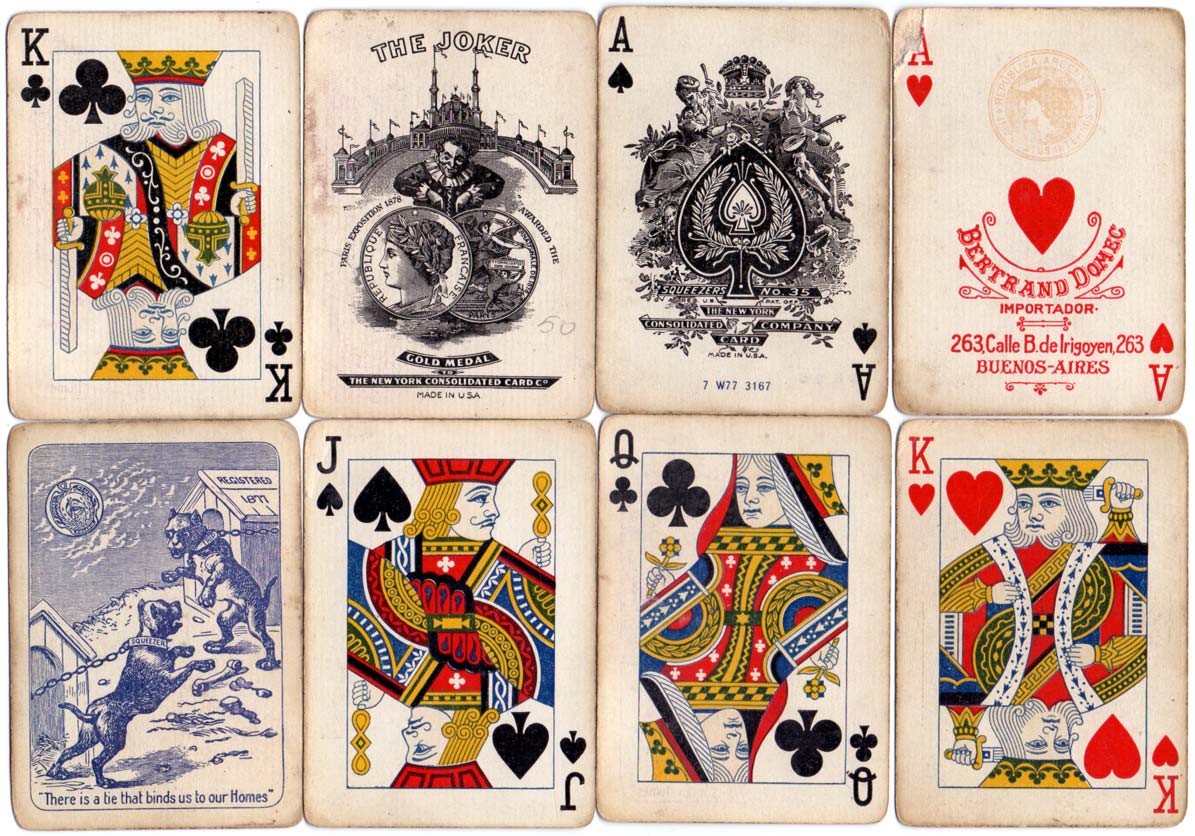 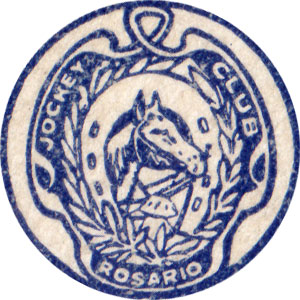 Above & Left: No.35 Squeezers issued by NYCCC in c.1916 for the Jockey Club, Rosario, Argentina. In this edition the Aces of Spades and Hearts are as in the above example. The smiling sun face on the reverse has been changed to a Jockey Club logo (see enlargement left) so this was a specially commissioned edition not sold elsewhere. An earlier example of cards customised for the Jockey club was manufactured by Chas Goodall & Son Ltd in c.1901→

Above: No.35 Squeezers imported into Argentina by Bertrand Domec, whose details are overprinted on the Ace of Hearts, c.1927. Although the Ace states Domec's address to be Calle B. de Irigoyen 263, the box gives the newer address at no.223. Bertrand Domec had a long-standing relationship with the NYCCC and was their exclusive agent in the River Plate region. 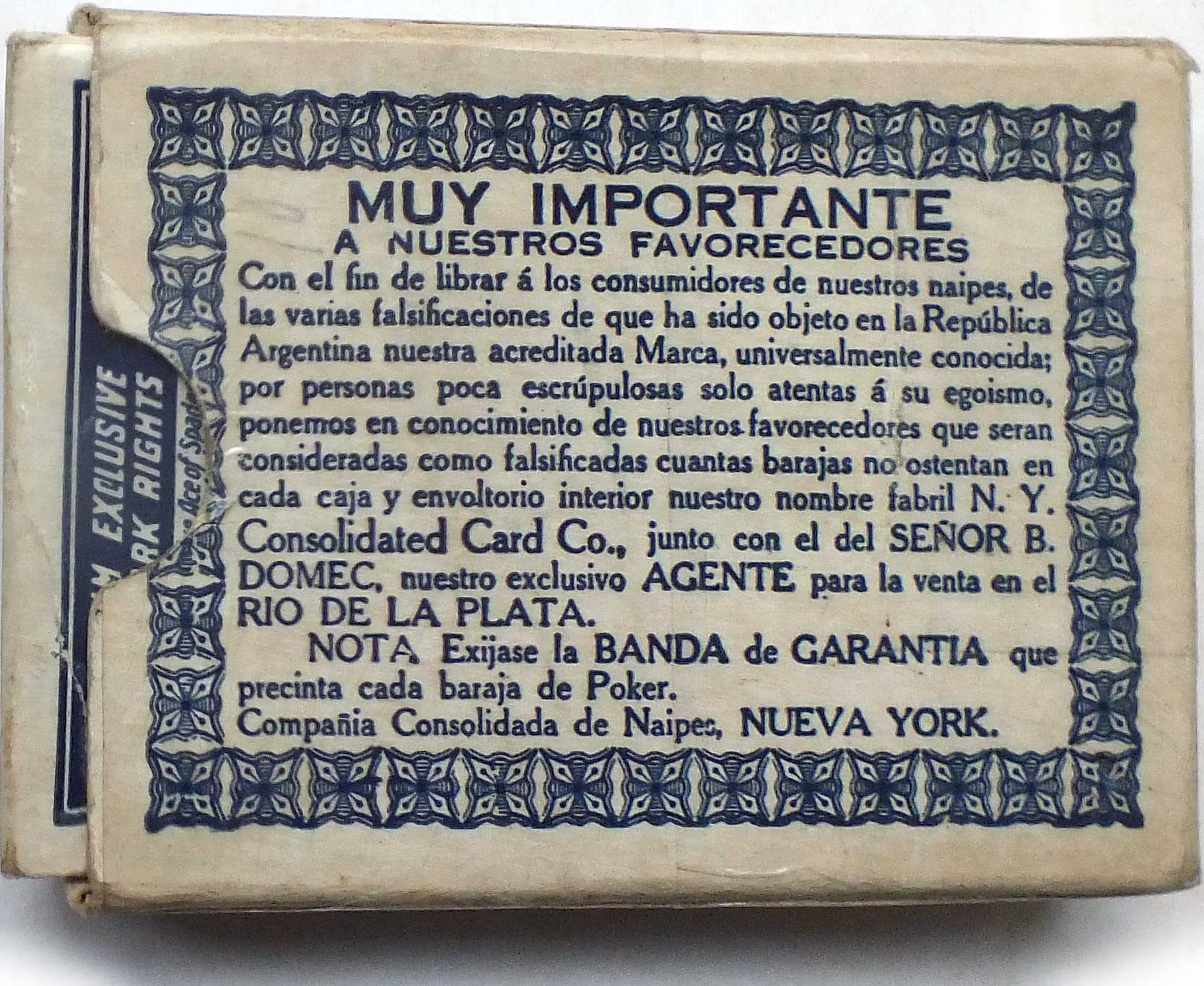 In 1930 the New York Consolidated Card Co. and the Andrew Dougherty Co. merged into Consolidated-Dougherty Card Co. Inc., with headquarters in New York. This company was dissolved in 1962 and was absorbed as a division of the United States Playing Card Co. of Cincinnati. The original Squeezer and Trip back design continued to be issued from time to time until at least 1977 (100th anniversary) with various Aces of Spades and Joker designs. 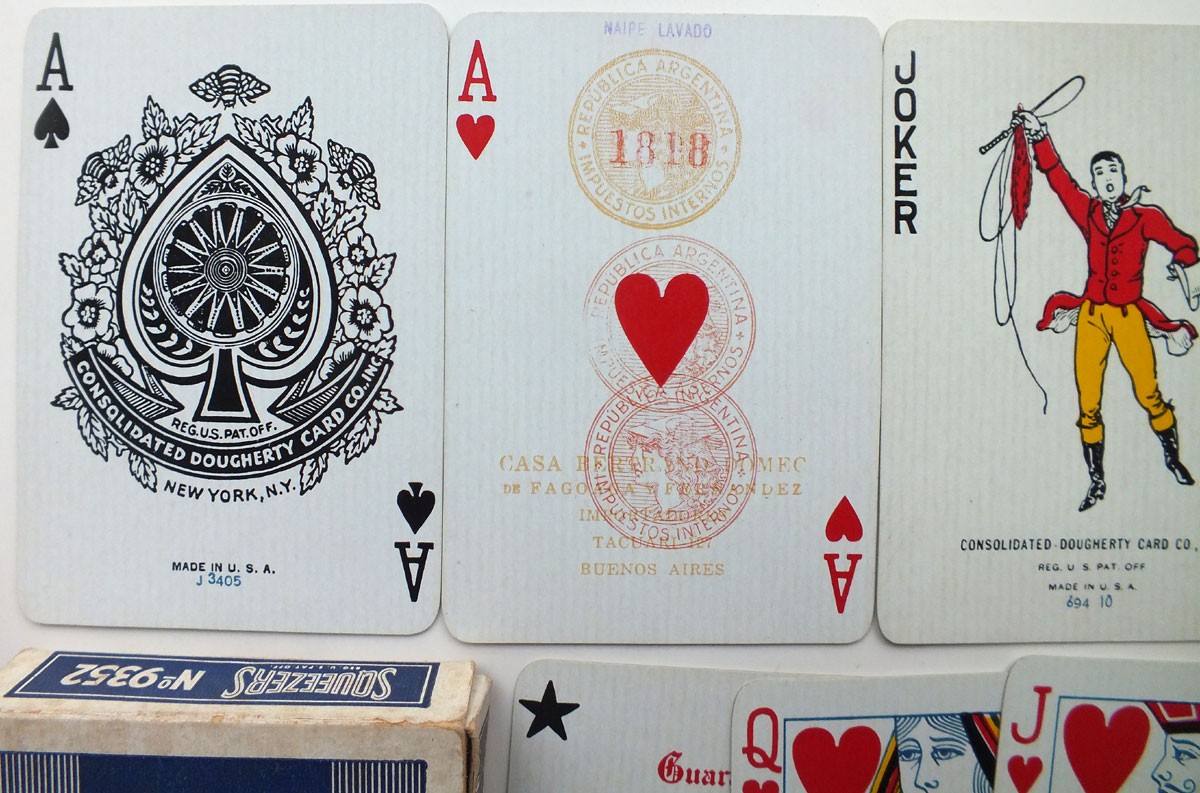 Above: No.9352 Squeezers issued by Consolidated-Dougherty Card Co., Inc. c.1947 and imported into Argentina by Casa Bertrand Domec de Fagoaga y Fernandez, Tacauri 127, Buenos Aires, whose details are overprinted on the ace of hearts. The back design is the same Squeezer and Trip picture as in the examples above. However, close examination of the ace of hearts reveals three 'Mercury' importation tax stamps, one orange (top) and two red (below) along with a control number (1818) and the legend 'Naipe Lavado' overstamped at the top of the card. This refers to the practise of refurbishing used decks which were then taxed for a second time.

Above: No.9352 Squeezers issued by Consolidated-Dougherty Card Co., Inc. c.1947 and imported into Argentina by Casa Bertrand Domec de Fagoaga y Fernandez, Tacauri 127, Buenos Aires. The ace of spades is identical to the one shown directly above, and the back design is the same Squeezer and Trip picture as in the earlier examples. The ace of hearts carries two importation tax stamps: the original orange or light brown 'Mercury' stamp (top) and a red 'Marianne' stamp (below) with the legend 'Naipes Lavados' overstamped at the top (see enlargement at left). The 'Marianne' version of the tax stamp did not come into general use until c.1953 so some time had elapsed before the cards were refurbished. Furthermore, the cards have been trimmed to renew the edges, and the margins can now be seen to be narrower.