"Some seek wealth;
others health and fitness;
yet others crave name and fame:
but the wise prepare their destinies,
before night-time arrives"

Judaism is the oldest of the great monotheist religions, parent of Christianity and Islam. The Law of Moses - the Torah - was divinely revealed to Moses on Mount Sinai soon after the exodus of the Israelites from Egypt. Judah Halevi of Toledo (c.1085-c.1140) and Moses Maimonides of Cordova (1135-1204) were great Jewish philosophers and are depicted on these cards. Also featured is Theodor Herzl (1860-1904), the founder of political Zionism, as well as other benefactors who founded Palestine Jewish colonies within Argentina. 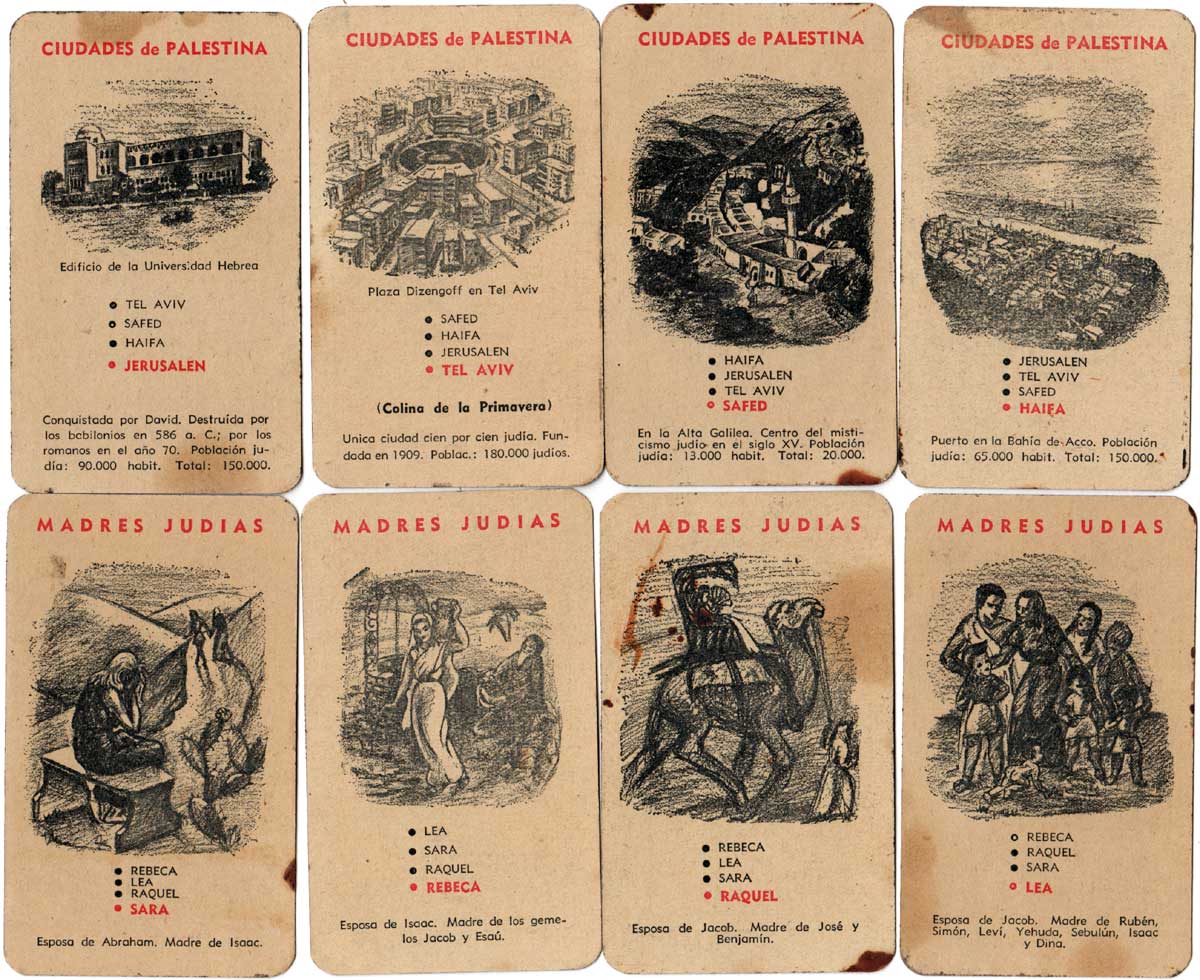 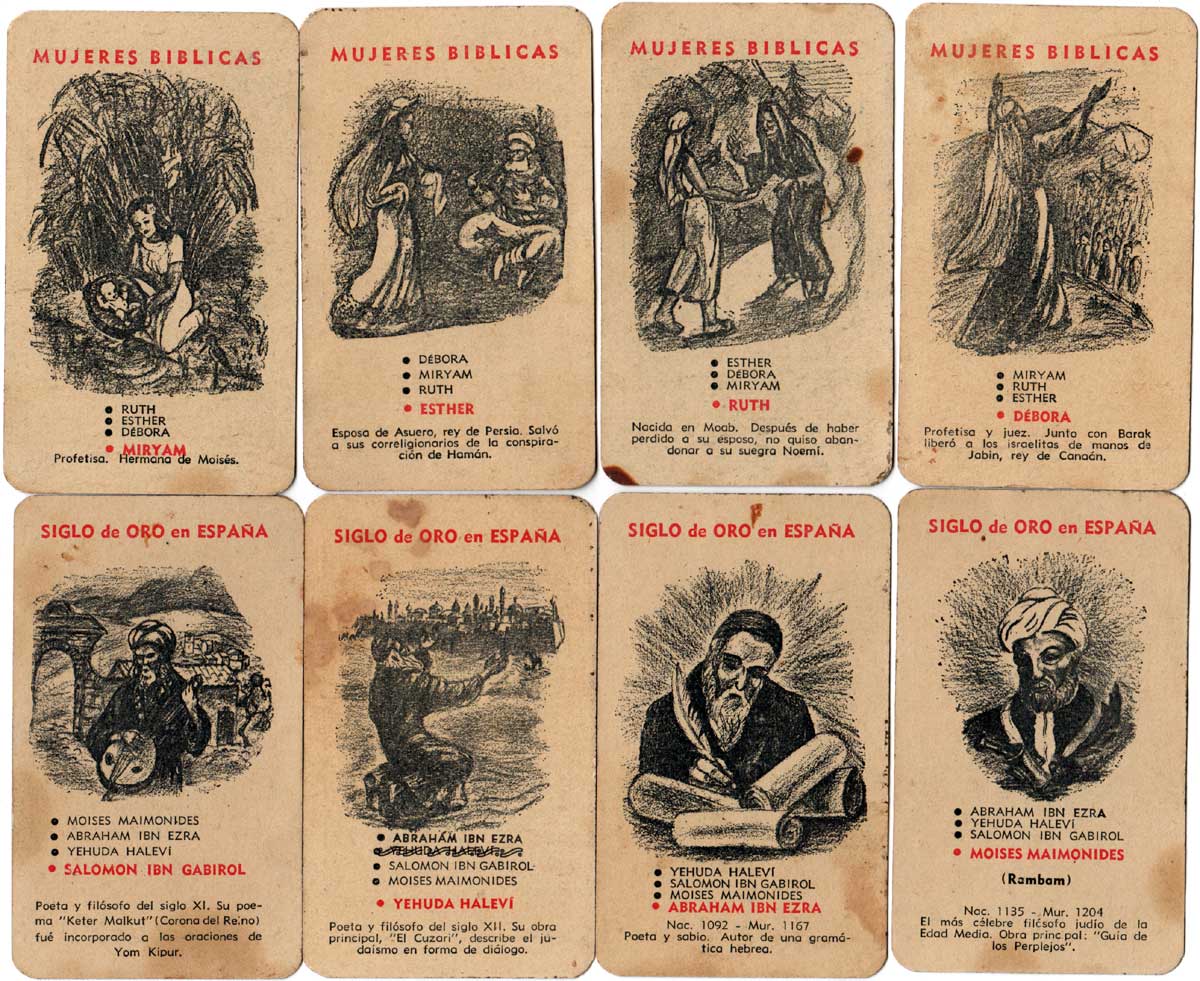 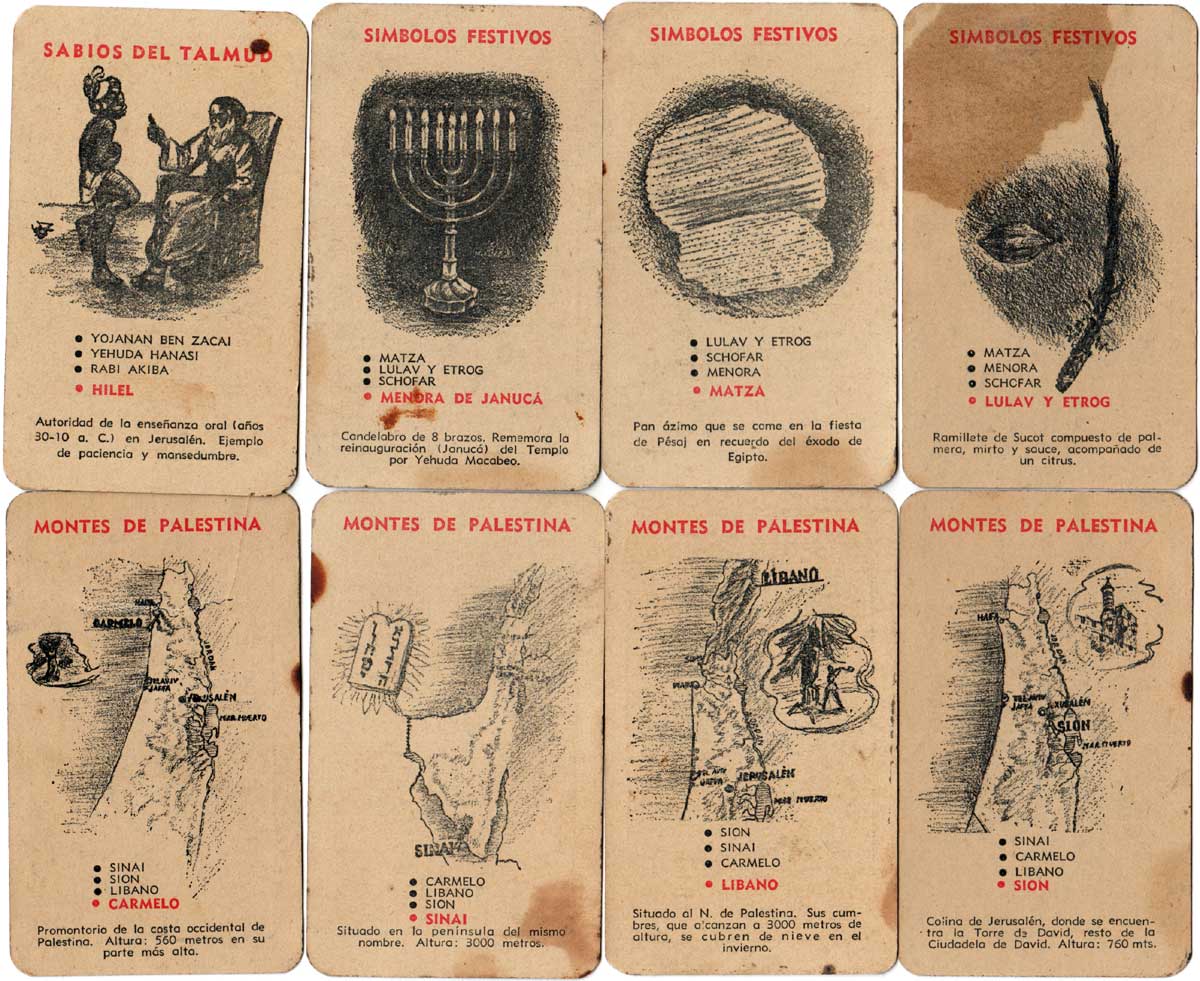 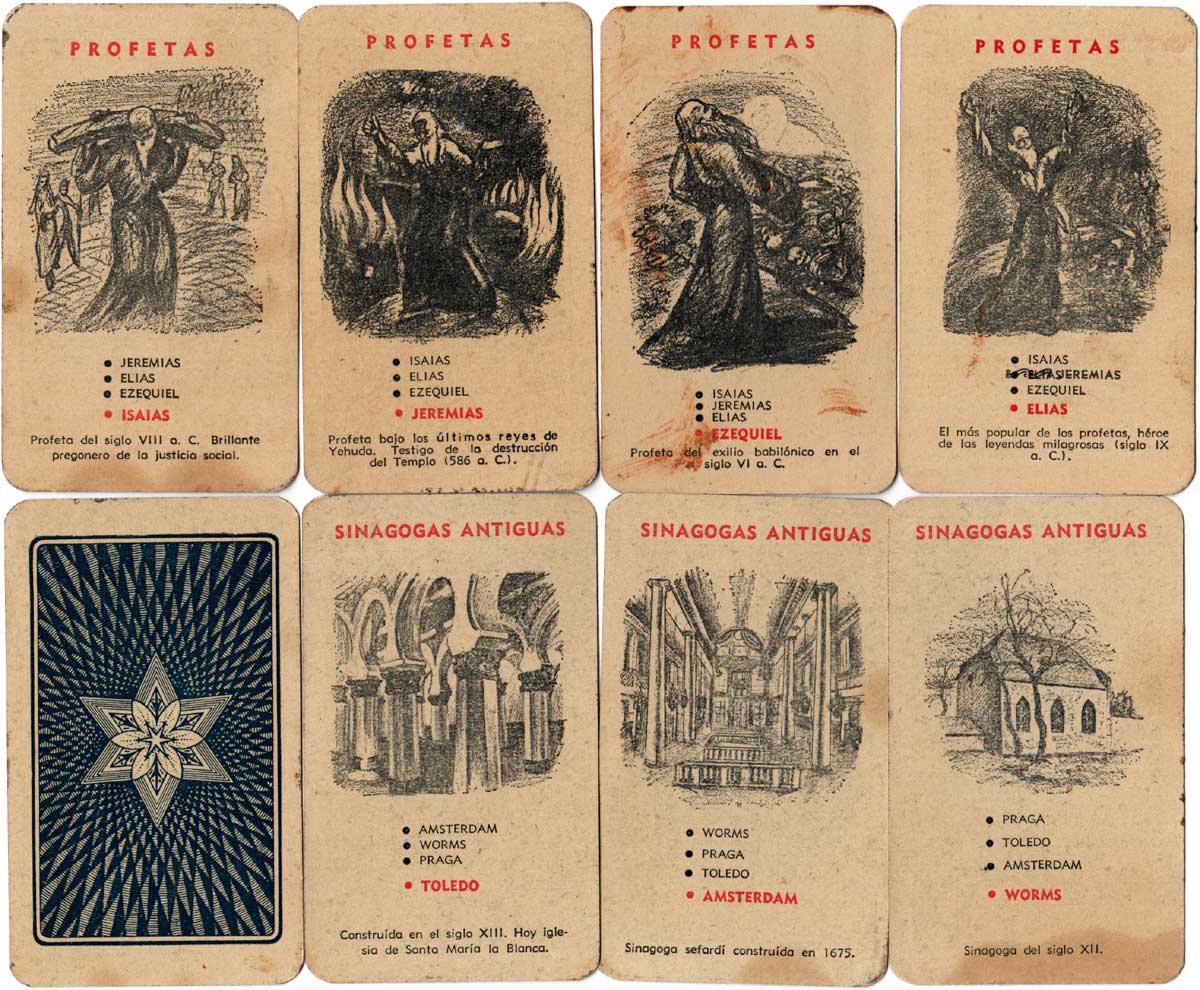 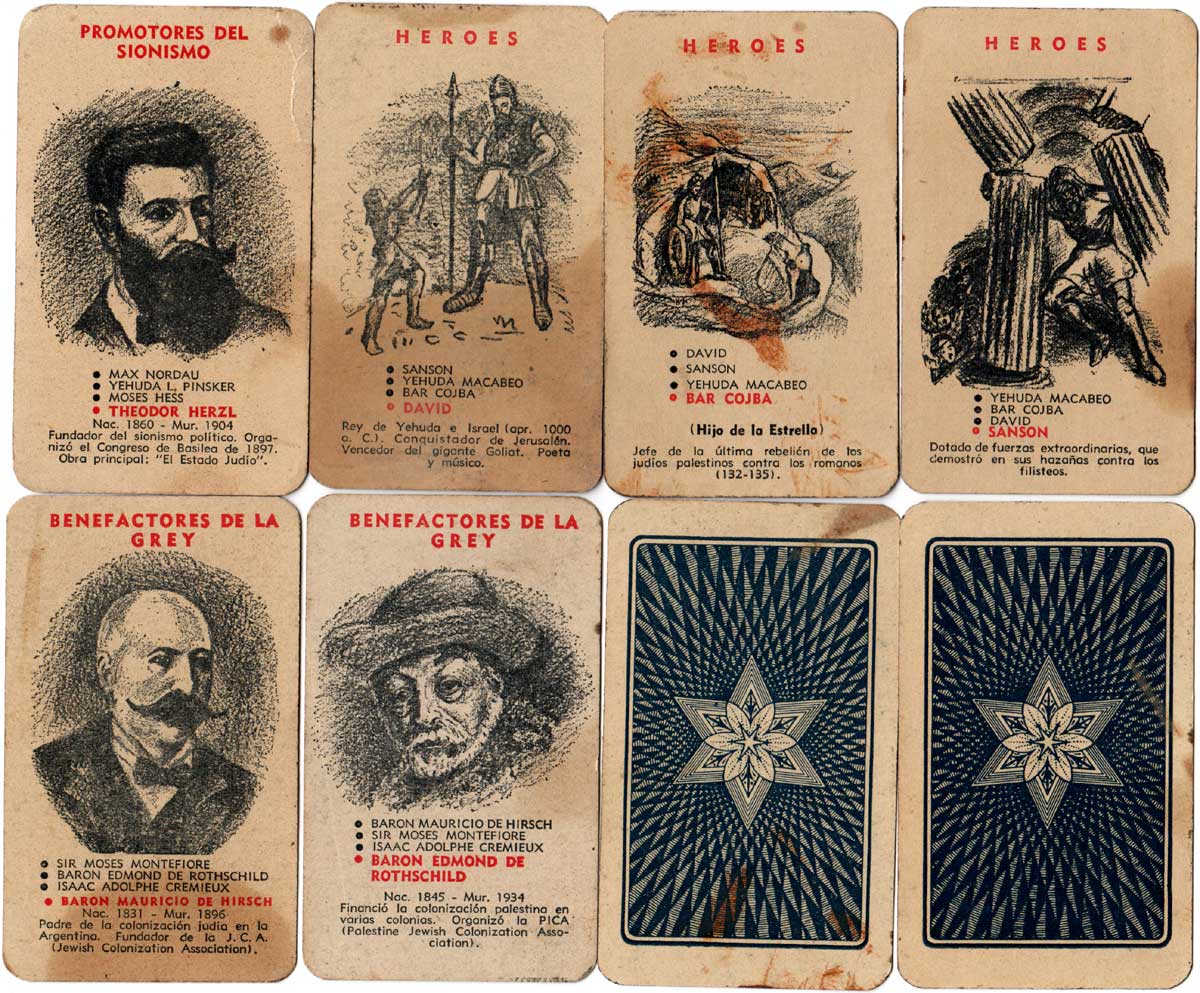 Above: 48 cards divided into 12 sets of 4 cards, probably manufactured by Igor Domicelj, Buenos Aires, c.1950. Printed in black and red, with a blue six-pointed star motif on the reverse.

Argentina's well-established Jewish community today numbers 300,000; their immigration began around 1890, from Russia, Poland, Turkey, Syria, Lebanon and Africa. Ninety percent of them now live in Buenos Aires. Essentially a social and family religion, Judaism concerns itself with the observances of every aspect of daily life. Among festivals are Passover, recalling the Exodus; Rosh Hashanah (the Jewish New Year); Yom Kippur (the Day of Atonement) and Chanukah, celebrating the victory against the Syrians under their leader Judas Maccabeus.