The queens and jacks of the French regional patterns can also be found used in the different portraits, though there seem to be fewer of them compared to the kings.

Some of the queen figures seem to be used with some variation in different court sets. It is difficult to know whether some of the figures should be considered sub-types or constitute a separate type. We can see this problem in dealing with Q1.

Q1 seems to have two slightly different types: one from the Perrocet set, who holds her skirt up and the other from Lyons 2 (the IV pack), who doesn’t. The latter appears in later packs, too. Notice, too, that her belt may be straight or twisted. 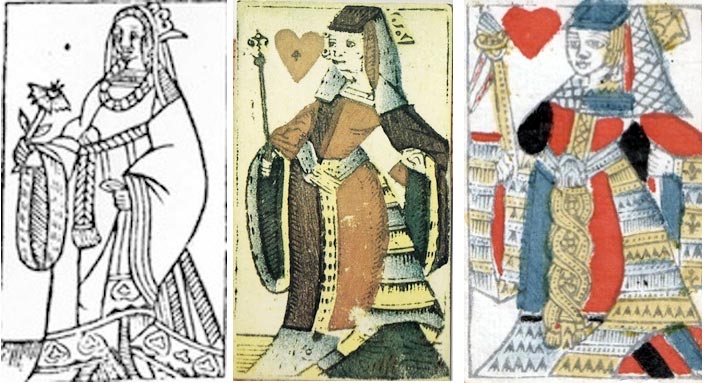 She appears in both Paris patterns (Paris 1 & 2) and Burgundy as QH and in Languedoc as QS. 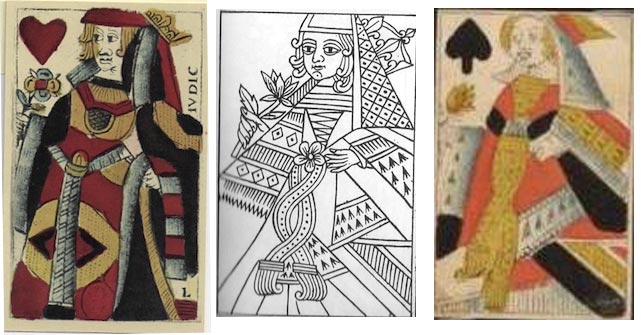 The QH in Provence is another possible candidate for Q1. In early packs she appears as a hairy 'wild woman’, but this feature disappears in the later 18th century. She faces right, as does the Rouen 2/English QC, who is another candidate for the group. 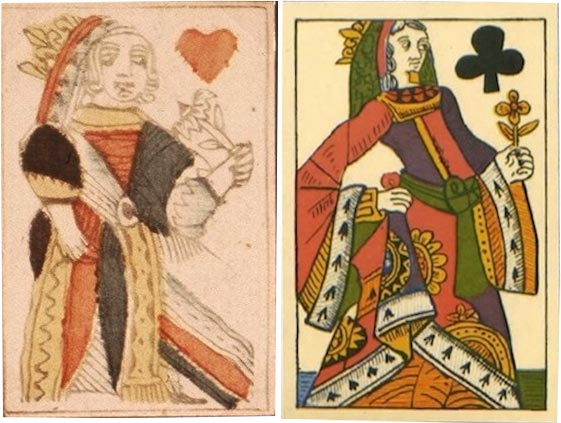 There are several other possible members of this group who hold both a sceptre and a flower; I discuss these in my TPC article. They may constitute a separate group.

Q2 is found in Perrocet’s set and in later Lyons 1 packs. She holds a glove in her right hand. She may be the model for the Lyons 2 QC facing left and the QD facing right, who seem very similar to one another, but who hold flowers and fans.

Q3 is another figure who seems to come in two versions: the Lyons 2 QD with a short ermine jacket and the Paris QS with a long panel at the back of her dress. One version appears in Languedoc as the QH, and both versions seem to be used in Provence as the black queens, sometimes facing in opposite directions, sometimes both to the left.

Q4 is found in Lyonnais packs, in Perrocet and Lyons 1 as the QH and in Lyons 2 as the QS; she is also the QC in Paris 1. 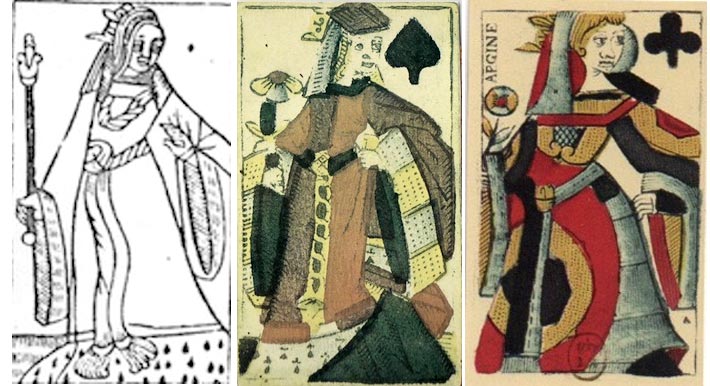 Q6 has voluminous ermine sleeves: she’s QC in Lyons 2 and QD in Burgundy and Provence, though in the latter case she faces right. 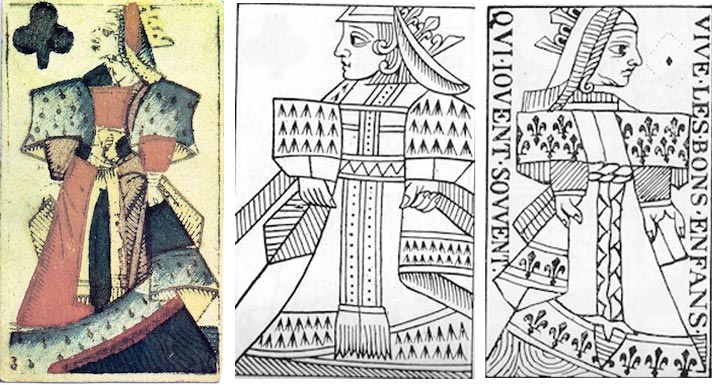 J1 is widespread. He has one hand on his hip and the other resting on his halberd. He is the swaggering JC in Perrocet’s sheet and the JH in Provence and Burgundy. He is the JC in Lyons 3. In these examples it is possible to see how the vitality of the figure has been removed by continued copying. The swagger of Perrocet’s jack with his hips and feet at an angle, which gives some element of three-dimensionality, has been flattened into a straightened two-dimensional design. In Lyons 3 the angled arm has even been reinterpreted as a shield. All this alteration has its parallels in the changes of the Rouen 2 pattern in its development into the standard English pattern: just think of the equally swaggering Maréchal JC and its 18th and 19th century equivalents.

He also appears as the JS in Languedoc and the JC in Dauphiné facing right. 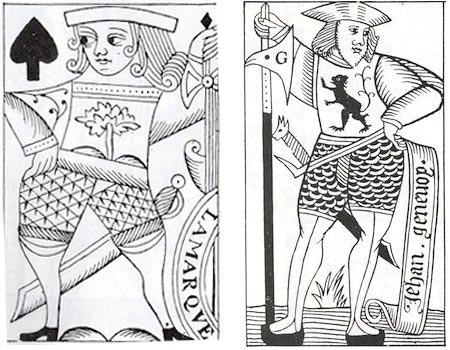 J2 is restricted to Lyons patterns as JS: Perrocet, Lyons 1 and Lyons 3. In the last version he has his front to us rather than his back. This change of orientation happens very easily when indistinct hands are interpreted as facing forward rather than away from us, so the back of the body, then becomes the front. Sometimes the hands are turned but the figure isn’t; we find the same situation with several standard English cards, e.g. JH and JS. 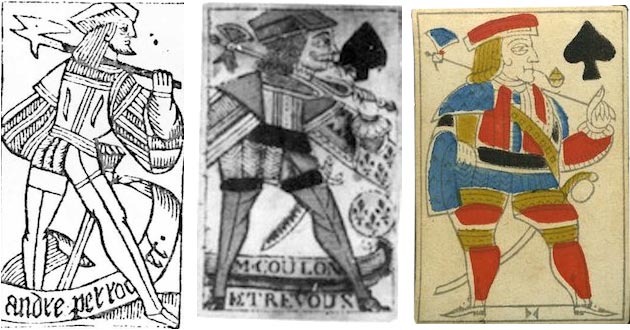 J3 is the profile jack who turns up as the English JS. He is JH in Lyons 1 and Languedoc and JD in Paris 1. The English JS lost the hand behind his back early on.

J4 is the JC in Lyons 2, JS in Provence and Burgundy and JC in Languedoc facing right.

He has curly hair and a strange cap with a chin strap; in later packs the cap looks like two propeller blades! A very similar figure appears as the JC in Provence, but with a raised hand and no sword. In turn this figure is reminiscent of the English JH, though he holds a staff and does have a sword. 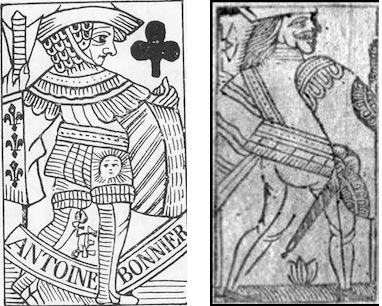 J6 is JD in Burgundy and Guienne. Guienne and Languedoc are usually considered to be more or less the same, but in the case of the JD, the former has a beard, the latter doesn’t. (There’s a dirty smudge on the image below, but no beard!)

This brings me to another problem. The are a number of figures that are very similar and sometimes from the same pattern. If we consider the jacks from Auvergne, they all wear helmets, their heads are in profile and they all wear beards. The JD is like J6, but are the others to be considered variants of the same figure? It’s not an easy question to answer.

J7 is restricted to Paris, but has some early forebears.

Above: JC Paris 1; Jack from the Guymier sheet; JH by Faucil; a Paris 2 JC masquerading as the JH! Probably a stencilling error.

In the early court sets the figures hadn’t settled into the suits we know from later packs. An interesting example is provided by Faucil, who worked in Rouen in the 1540s. Here we have the axe-wielding king as the KC (bottom missing), the QD is the later (English) QC and the red jacks are not found in the later Rouen 2 packs. The (part) JC is J1. This assumes these odd courts are all by Faucil and the same kind of pack. 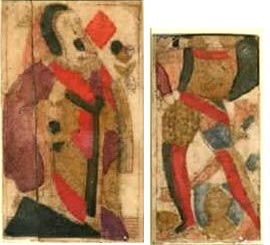 The Faucil JH turns up as the Paris 1 JH facing the other way, but he disappears when Paris 2 is introduced. 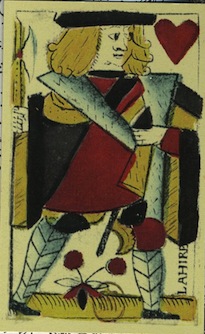 There are other figures which may or may not be related to the ones I’ve discussed here, but it’s certainly fun trying to work out the relationships between the many court cards of France.