My wife and I live in a quirky house, parts of which were a pub. Although it ceased to be an alehouse in 1914 (the outbreak of World War I plus the loss of the river-based wherry trade to the railways), the old drinking room is our kitchen with hatches to serve beer through. Originally these would have been hinged and had, according to those who knew it before we did, pink glass panels in them. These were allegedly broken by a missile hurled by one of the previous owners, so when we bought the property they were just openings in the wooden screen between the hallway and the kitchen. For many years we wondered whether we could put at least something in them, preferably glass again.

We have recently been lucky enough to get to know a glass artist, Neil Harvey, who also lives in Bungay and was really taken with the old playing cards I showed him. He could see lots of potential from his particular artistic perspective. In the end we agreed that it would be a great idea to put glass panels in two of the three openings with a playing card theme. We chose the king and queen of spades from De La Rue’s redrawn single-figure courts of the 1840s (D3) and, since there was plenty of room, some appropriate Owen Jones back designs as a lower panel on each. One of these is the design for Prince Albert of 1851 (under the king) and the other that for Queen Victoria. These are the windows as seen from the kitchen. 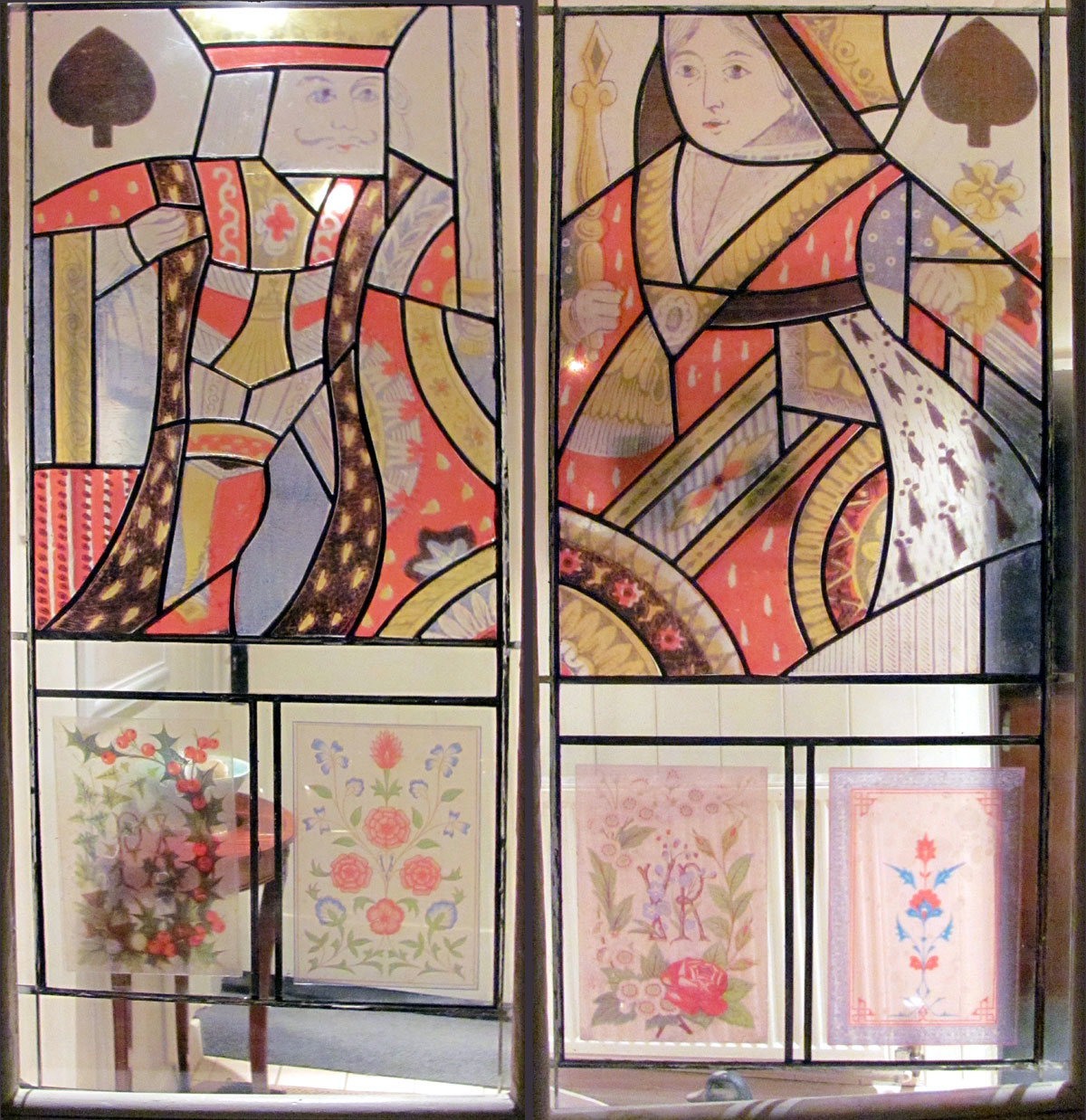 Above: stained glass by Neil Harvey.

The picture below is the view from the hall into the kitchen. 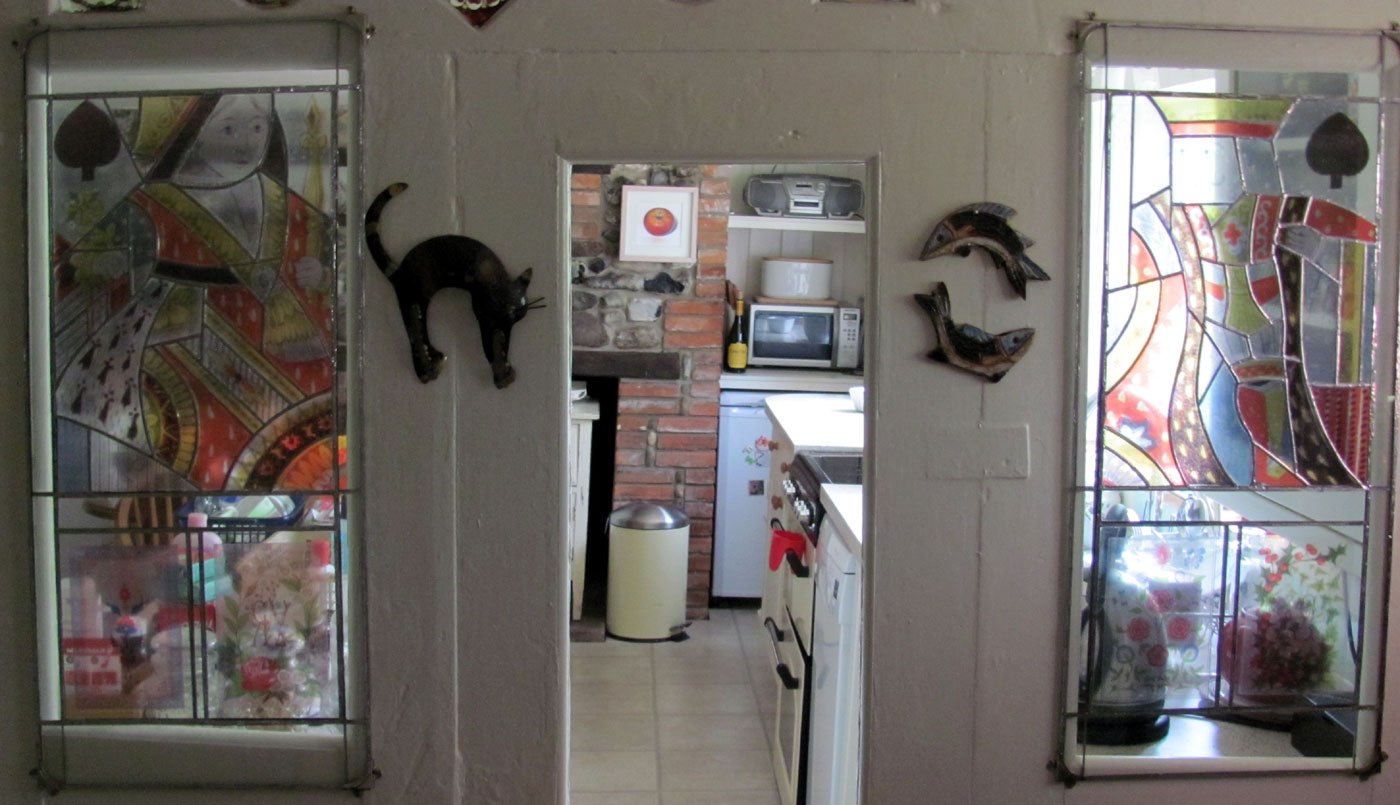 They complement the hand painted small glass panes from the 19th century above them, the very bottom of which can be seen at the top of the picture. 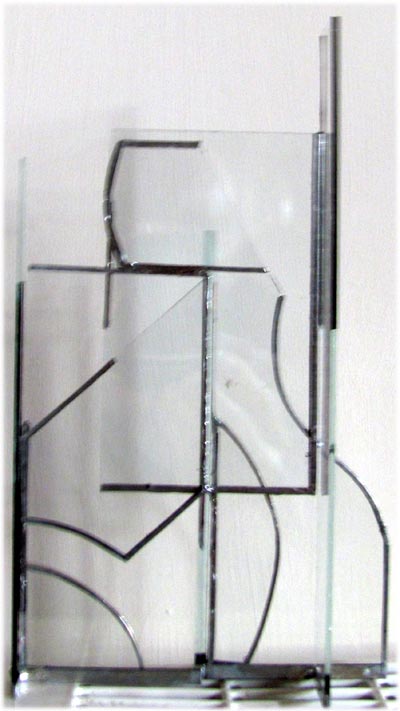 He also produced a small three-dimensional model as a test piece, which could be produced as a glass ornament. Since the picture was taken, I've added a coloured print of the queen to the back of the glass.

There is a tenuous link between Bungay, where we live, and the Queen of Spades. Judging by some of the details in the Queen of Hearts as drawn by Tenniel for Lewis Carroll's Alice in Wonderland, he used the De La Rue Queen of spades as a model. The equivalent Queen of Hearts from the same court set is rather too delicate-looking for the Carroll character. After the first print of the book by Oxford University Press was rejected by both Tenniel and Carroll, all further copies of the original version of the book were printed by Clays. Although they were based in London at the time, they transferred their business operation to Bungay in Suffolk and so many thousands of copies of Alice were printed here.