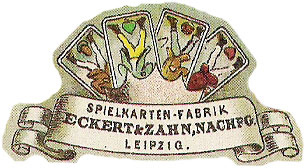 This deck was apparently made to commemorate a Shooting Festival held in Leipzig in 1884 (see the Ace of Leaves). A Schützenfest (German “marksmen's festival”) is a traditional festival or fair featuring a target shooting competition in the cultures of both Germany and Switzerland. At a Schützenfest, contestants compete based on their shooting abilities, for example by shooting at a wooden representation of an eagle. The winner of the competition becomes the 'Schützenkönig' (“king of marksmen”) until the next year's competition.

The Deuces (Aces) have the letter “A” upside down in the lower right corner. The Kings, bearded and with substantial paunches, have the letter “K” in the same place. The Obers, which are usually represented by men, in this deck are ladies wearing period costume and carrying rifles, with the letter “O” in the lower right corner. The Unters have the suit symbol at the lower end of the card as is usual but no letter in the corner. The playing card maker’s name appears on the Ten of Bells as Eckert & Zahn Nachfg., Leipzig although the deck was printed & published by Aug. Kurth, Leipzig. The tax stamp on the Ace of Hearts is the one that was in use from 1879 to 1918 and reads “Deutsches Reich—Dreissig PF—No.59”.

Peter Endebrock wrote: "Note that it is "Eckert & Zahn Nachfg." (for "Nachfolger", successors to E&Z). The strange thing about it is that there never was a company with this name without the "Nachfg.". They appear in the directories from 1883 to 1892. The company is not well-known, they produced two other non-standard packs: "Fröhlichs Patentkarte" (a "Skat congress pack") and "Schachett". They also produced a standard Saxon pattern pack. The facsimile (shown above) was printed by VEB Altenburger (in the GDR) in 1985. The original is rare, but I have seen the facsimile several times on eBay."