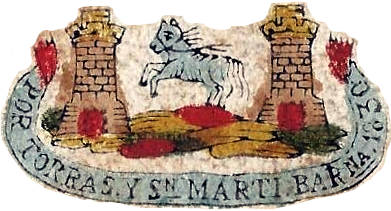 Torras y Sanmartí is registered as a cardmaker in Barcelona between 1823-1834. The design of the cards is an early version of what evolved into the “Spanish Catalan” pattern by the end of the century, moving away from archaic or baroque traditions towards simpler designs, although this example still retains features from the former “Spanish National” pattern. The Four of Cups (click image to right) has a device of a horse between two towers, and bears the tax collector’s signature. The Ace of Coins has a medallion with a laurel-crowned head above an angel carrying a cornucopia. The court cards stand on little plinths. 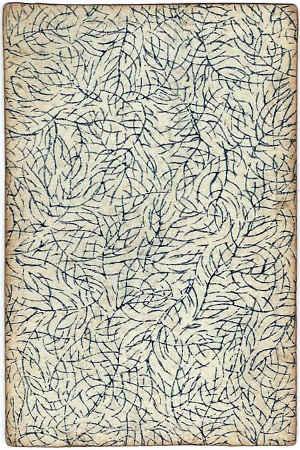 Above: these cards are from Fort Madison Iowa (USA). This is the first part of the state of Iowa to be settled. Very early in the 1800s a Fort was established on the Mississippi River. It was as an early trading area for traffic going west in the settlement of the United States. The backs are decorated with a randomised repeating pattern in blue. The words “De Una Oja” on the Four of Cups refers to the manufacturing process, in that the cards are printed on a single sheet of card, not a 2 or 3-ply laminated cardboard. Images courtesy Larry and Tammy Northup.