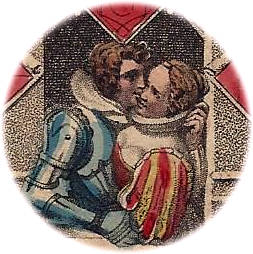 Pictorial ‘Transformation’ playing cards published by Caleb Bartlett, New York, 1833. The original designs are believed to be by Rudolph Ackermann and published in the Repository of Arts magazine, London, 1818-19. The American edition shown here is almost an exact copy of the Ackermann version, except that the colouring is much heavier and brighter than in the originals so that some details of the design are obscured. The deck is accompanied by a booklet in which each card is described in detail  see excerpt →

Above: Pictorial playing cards published by Caleb Bartlett, New York, 1833. The descrition of the Seven of Diamonds given in the accompanying booklet reads: “A young lady is busily employed in knitting, and by her side is suspended her work-bag, which is formed by the diamonds, as is the corner of her handkerchief. The diamond composes the argand lamp, and decorates the vase and other furniture.” Images courtesy Larry and Tammy Northup.

NOTE: As has been previously noted, two card manufactures with similar names produced cards in the mid 19th century. That similarity of names, Caleb Bartlett, who produced cards from 1830 to 1850 and Charles Bartlet, a pseudonym of Samuel Hart, who produced cards only in 1845, can be the cause of some confusion when trying to affix the correct attribution to certain decks by either maker. Our listing for the Ackerman deck is a case in point. It was initially and erroneously attributed to Charles Bartlett. Card collectors should take note of the fact that the name Charles Bartlet is spelled with only one letter “T” while the name Caleb Bartlett is spelled with two letter “T’s”. The names of either maker are sometimes found on the Ace of Spades but in the case of Caleb Bartlett, his initials, C.B., are cleverly hidden on each court card, a feature that can aid in identification  (from Rod Starling).