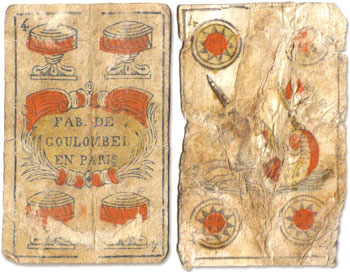 So-called because it is a version of the old Spanish National pattern which was manufactured by Parisian card makers in the 19th century for export to South America.

Right: two cards by 'Coulombel en Paris', with a sea horse monster depicted on the Four of Coins.

The ‘Parisian’ Spanish Pattern sometimes has female cavaliers, possibly influenced by French ‘Aluette’ packs. A dog is often seen tethered in the background of the Valet of Coins. The Ace of Batons is grasped by a hand. The Kings wear stockings which are revealed beneath their parted robes. In many examples a sea monster is depicted on the Four of Coins and the Four of Cups often mentions the word ‘Paris’.

The pattern has been used until recently in Uruguay.  (click on images below to see more).