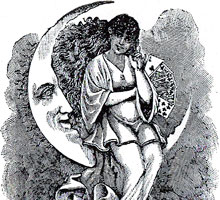 All playing card manufacturers produced their own version of the Steamboat brand, usually towards the bottom of the range. There doesn't appear to have been any patent, copyright or trademark restriction on the “Steamboats” brand.

Above: National Steamboats #9 manufactured by the National Card Co., c.1886. 52 cards + 'Watermelon' Joker. Click the image to see another example with slight differences in details of the costume decoration, more akin to Goodall's designs.

Above: Superior Steamboats No.9, c.1886. Although the Steamboats brand was the bottom of the line quality-wise with all makers, this particular deck is gold edged! Note that the typeface for the indices has changed, but the colourful Joker is the same  see more.  Image courtesy Rod Starling.

All National brands were available with gold edges, and the brand number on the box was one higher on gold edged decks.

Above: Crescent #45 playing cards by the National Card Co., c.1886-1890 with an artistic landscape on the back. The box states that the deck is in the “Crescent Art Series”.   Image courtesy Rod Starling.

Above: Apollo #33 c.1890s, with baseball back design featuring N.C.Co monogram and larger indices. 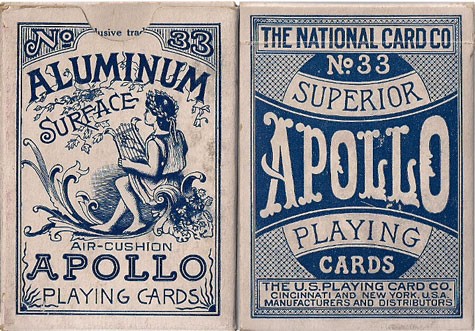 Above: Apollo #33 issued by the United States Playing Card Company who were continuing to publish the former National Card Co brand, 1926. The Ace of Spades has some small differences in the design. The Joker features Brownies as were popularized at the time by Palmer Cox, a writer of children's stories. Images courtesy Rod Starling.

1886 saw the ongoing production of several new brands introduced by the National Card Company including Owls, Arrows, Aladdin and Columbia. In that same year the American Federation of Labor was founded and the Statue of Liberty was dedicated in New York Harbour. The structural engineer of the statue was Gustave Eiffel.

Full House Poker No.555 was patented on 30 June 1896 and was the first example of a deck carried through into USPCC’s range. Earlier examples of the deck have the words “Patent Applied For” rather than the actual date of the patent on the ace of spades and box.

Above: National Playing Card Company No.555 “Full House” deck. It is interesting to note that the word “Poker” was added on the box in addition to referencing the 11 and 12 spots. It looks like the manufacturer wanted to make it clear that the additional spot cards did not render the deck unusable for the game of Poker. The USPCC version of “500” deck had 11, 12 and 13 spot cards wrapped separately from the 52 regular cards which again suggests an effort to retain the integrity of the regular deck for all games. The whole idea of additional spot cards was ill conceived because if the additional spot cards are used for some games and not for others, they will show different grades of wear from the rest of the deck and will therefore be identifiable during play just from that factor alone. Not a good idea. (Click image to zoom). Courtesy Rod Starling. 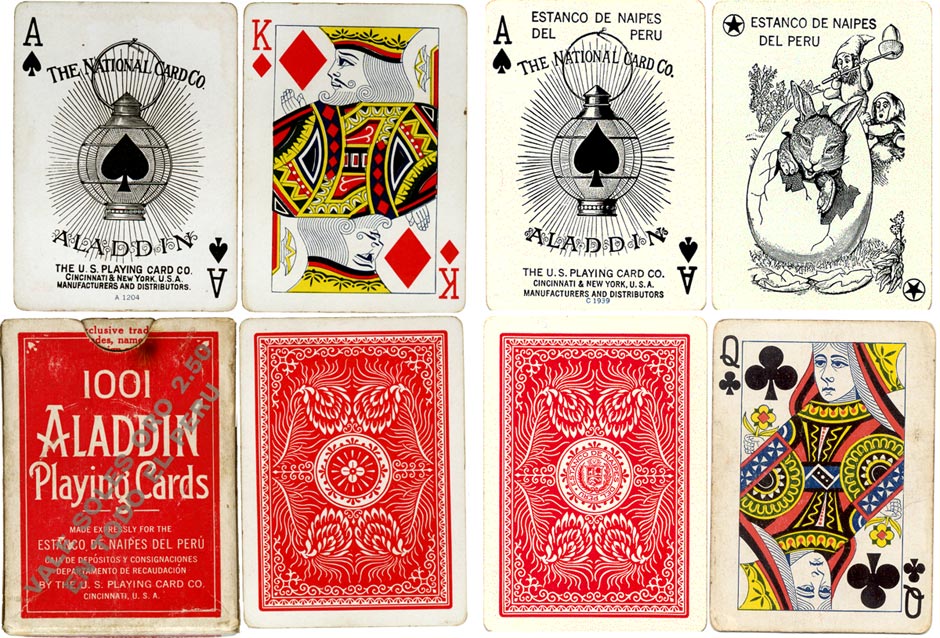 Above: the National Card Co's “Aladdin No.1001” playing cards manufactured by The US Playing Card Co for the Estanco de Naipes del Peru, 1940s. The legend “Estanco de Naipes del Perú” is printed either on the box (left-hand example) or on the ace of spades, joker and reverse (right-hand example). The price of 2.50 Soles Oro is also overprinted on the box. The Aladdin brand is still being manufactured by USPCC with the standard contemporary USPCC courts. 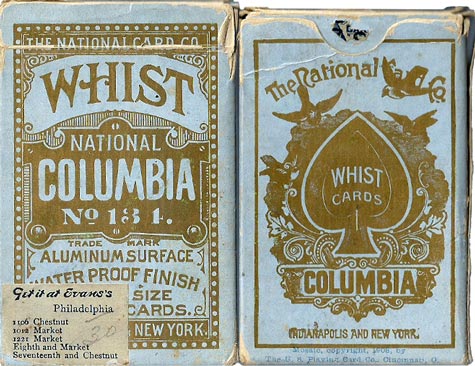