Established in 1781 by the Spanish government to control the sale of playing cards in the American colonies, the purpose was to administer the importation of playing cards from Spain. Packs had secret markings to facilitate the detection of fraud, and a hierarchy of uniformed officials controlled operations. At some point this was superseded by Peruvian laws when it became a state monopoly garnering revenues for the national treasury.

In October 1888 the Republic of Peru Congress passed Law no.26 establishing taxes on playing cards, whether imported or locally produced, according to the quality of the cards:

Above: Peruvian "Estanco de Naipes" tax band which was presumably wrapped around the outside of each pack (1924-67). The printer's name, which can be read at the lower right-hand end of the tax band, is: Lit. T. Scheunch, Lima. 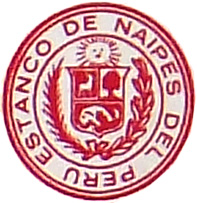 In Law no.16754 (Nov. 1967) the Estanco de los Naipes was abolished and a duty on imported playing cards imposed according to their quality:

Home produced playing cards continued to be taxed according to established national laws.