The History of the Court Cards

How did the extraordinary designs of the court cards evolve, full of semi-circles and meaningless diagonal shapes? Are the pictures based upon any historical personalities? Has this question ever crossed your mind while playing cards amongst friends?

Behold four Kings in majesty rever'd,
With hoary whiskers and a forky beard;
And four fair Queens whose hands sustain a flower,
Th' expressive emblem of their softer power;
Four Knaves in garbs succinct, a trusty band,
Caps on their heads, and halberts in their hand;
And party-colour'd troops, a shining train,
Drawn froth to combat on the velvet plain.

Rape of the Lock, Canto III.

The court cards in English packs of playing cards derive from models produced by Pierre Marechal in Rouen around 1565. A pack of such cards is preserved in the museum at Rouen. All four kings in the Rouen pack wear a crown over a flat cap, and long fur-lined cloaks opening to reveal stockinged legs. Likewise, the Queens and Jacks are undoubtedly the ancestors of the English pack. During the passage of centuries, and even though master-copies may have existed in the workshops, a number of gross errors have been made by copyists and wood-cutters, so that hands, symbols of office and other attributes have lost their meaning. 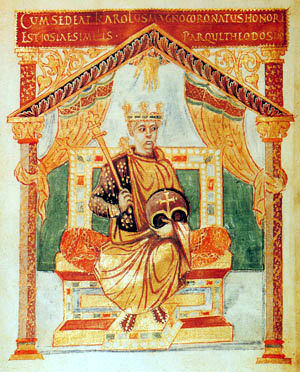 The introduction of double-ended courts in the middle of the 19th century made the problem even worse. Playing card manufacturers usually try to preserve some kind of 'traditional' feel, but due to the constrained size of a playing card, as well as economy, many compressions and distortions have been introduced into the figures.

Queen of Diamonds. Mme de Maintenon kept this card in her journal. It had been taken from a pack with which she was playing a game of piquet at the time when her opponent, King Louis XIV proposed a clandestine marriage.

Towards the close of the 16th century French playing card manufacturers began naming the court cards after worthy heroes in the epics of mediæval history, as narrated in chronicles, romances and legends of the day. To begin with the practice was a bit arbitrary, but by the 17th century a definite set of names had become established   more →

Right: Manuscript images like this were copied time and time again to depict kings or emperors through the centuries. Charlemagne's companions had a private joke amongst themselves in which they pretended to be heroes from classical antiquity: Horace, Homer, Julius, King David… This example shows Charles the Bald, who was king of France from 840 and emperor from 875, sitting on his jewel-studded throne. The formalised portrait also shows similarities to 16th century French court cards which were named after ancient heroes such as 'Charles', 'Alexandre', etc. [Paris, Bibliothèque Nationale, ms.lat. 1152, fol.3v]

In this context, we may observe that the 15th century humanist scholars of the renaissance, in seeking the original classical texts and sources, wrongly convinced themselves that Carolingian manuscripts represented original Roman manuscripts. Thus, they began imitating Carolingian minuscule script, which in turn was adopted by the early printers as 'Roman' type. Likewise, Carolingian drawings and illuminations (9th century) were also mistaken for original, classical Roman sources: Charlemagne, Caesar, David and Alexander were all 'from ancient times'.

Far left: King David in pennance, from a book of hours made in Paris about 1445 [J. Paul Getty Museum, MS.Ludwig XI.6, fol.100r].  Left: French court cards, with names of Charles and David, printed in Paris about 1760 [British Museum]. King David's harp can be seen at the lower left of the card.

A similar idea seems to have been adopted by French card-makers in the 16th century who gave epic, heroic, pagan or biblical names to the court cards, such as ‘Rolant’, ‘Charles’ or ‘Caesar’. However, there is no evidence that the same idea was taken up by any English playing card manufacturer, even though English playing cards can be traced back to 16th century French ones. Thus we may safely say that the English court cards do not partake of any mythological or historical derivation, and they have never been named after any mediæval heroes of antiquity or any historical personalities, as confirmed by the origin of the pack - except for 'Black Maria' the Queen of Spades.

The source of the costumes on the English court cards having been shown, the illustration below (left) shows a formalised initial-letter portrait of James I, king of England (1603-1625) on an illuminated Letters Patent. The king is depicted in full-length, in ermine-lined crimson robes of state, and we might be tempted to see a connection to English playing cards. However, we must be content to know that, apart from the Queens' head gear, which is Tudor, the rest of the costume is late mediæval in style as seen in the pack by Pierre Marechal of Rouen   small image to right → 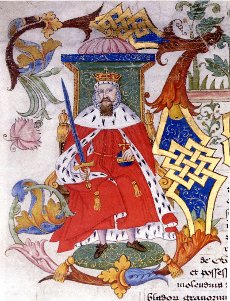 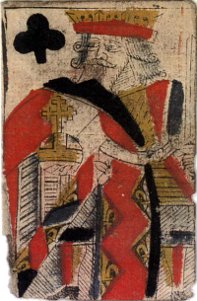 Far left: an initial-letter portrait of James I, King of England (1603-1625) on an illuminated Letters Patent.   (Click image to zoom)

Second images: King of Clubs, c.1725 and King of Spades from a standard English pack manufactured by Hunt in c.1790. The King of Clubs holds an imperial orb and a sword, and wears full-length ermine-lined robes, in much the same way as the formal miniature of King James I.

King of Clubs. Pope wrote “That long behind he trails his pompous robes. And, of all the monarchs only grasps the globe”. The title “King of Clubs” was bestowed by Johnson on the Literary Club.

Below: standardised double-ended English court cards from the Victorian era, 1870s. In the double-ended versions, although more convenient, many charming features of the designs are lost. 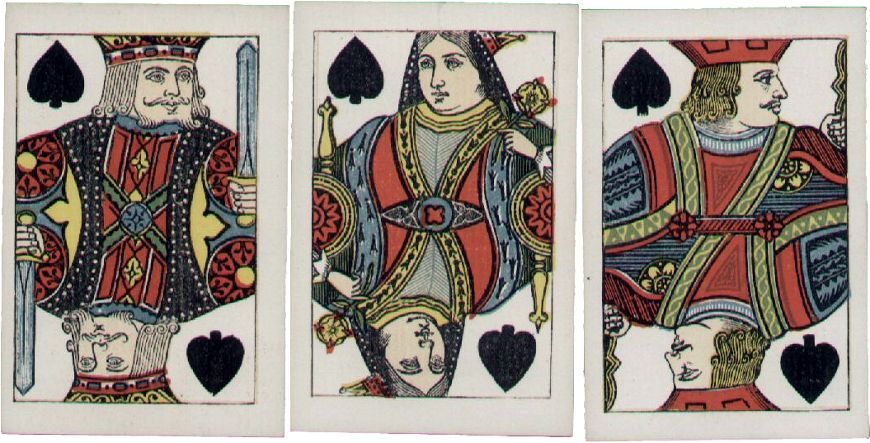