The so-called “Tarocchi di Mantegna” is a double series of 50 instructional engravings each, the E series and the S series. They weren’t produced by Andrea Mantegna (1431-1503), however, the subjects of the set are mentioned by Giorgio Vasari who writes in his Lives about Mantegna that he created copper prints of trionfi - another name for the tarot Trumps.

Right: detail from Iliaco, no. XXXI, depicting the winged male genius or spirit of the sun, his name sharing the root with Helios (Elios). He embodies light and energy.

There are no suits and the images are numbered consecutively from 1 to 50, divided into the following groups: Society ⋄ Apollo and the Nine Muses ⋄ the Arts and the Sciences ⋄ the Seven Virtues and Sun, Time and the World ⋄ the Planets and the Spheres. 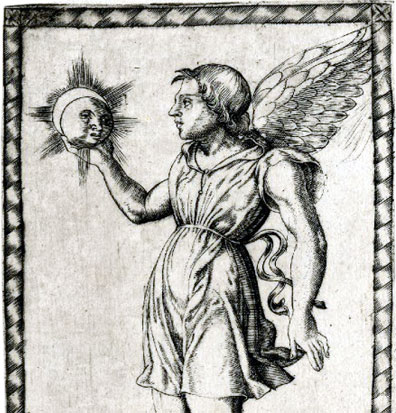 Thus we have a system of divine activities and functions organised into a hierarchy, reflecting an ideological structure and bringing to mind the soul's progress towards perfection. Humanists took up the challenge of reconciling Neoplatonism and Hermetism with their philosophical Christianity. The series were intended for edification of the mind, and also used as workshop patterns in artists' studios.

Above: The Mantegna “Saturno” card (second row from bottom left) allegorically shows an old man, maybe Chronos of Greek mythology, lifting a child to his mouth while other children await their fate at his feet. In his other hand, Saturn holds an Ouroboros, a small dragon or serpent biting its own tail, and a scythe. Time that devours its own offspring is a metaphor for “bringing to an end all things which have a beginning”.

Besides the double series of 50 engravings each, the E series and the S series, there are a number of copies by different artists of the Tarocchi di Mantegna. The young Dürer copied of some of them. Of the known examples none were made into a pack of playing cards, but were printed onto thin paper as black and white outlines. However, woodcut copies of these engraved images occur in later educational or didactic books.

The engravings are also known to have provided inspiration to later artists, including the prolific Bolognese artist Amico Aspertini (c.1474–1552), who made copies of the tarocchi in his note books and produced fresco cycles with the same subjects. Ludovico Lazzarelli (late 16th century) was also inspired by the tarocchi images. (see Castaldo, 2012).

Above: details from the sketch-book of Amico Aspertini (c.1474–1552) showing figures copied from the Tarocchi cards. London II codex. Coloured chalks and wash, heightened with white, 219x159 mm. © Trustees of the British Museum.

In her book An Introduction to Western Esotericism [2008], Nadya Chishty-Mujahid posits that the two series of engravings (E and S series) are linked to each other. Each set of engravings depicts an ascending ladder of Neoplatonic teachings beginning with the conditions of man and proceeding through Apollo and the Muses, the liberal arts, and the principles of the universe all the way to Prima Causa. In her analysis of the first group of the E and S series Chishty-Mujahid notes that the ten male figures [Beggar, Servant, Artisan, Merchant, Gentleman, Knight, Doge, King, Emperor and Pope] are linked together in a manner whereby the first groups of the E and S series form a caduceus. The S-King figure bears such a strong resemblance to the major arcana of the Sola Busca tarocchi that Chishty Mujahid purports that the Mantegna and Sola Busca tarocchi are themselves further linked. Over the ages these mutus liber tarot texts of ritual and instruction have most likely given rise to the hierarchical and ritualistic aspects of present-day Freemasonry.

Relating to the varied sources of inspiration, Joscelyn Godwin [2002] writes about ideas deriving from Egyptian esotericism which had recently reached Europe through the Corpus Hermeticum, translated into Latin by Marsilio Ficino in 1463. A Christian version of it was already well known, and given its classic form by Dante. Godwin also quotes Jean Seznec who showed that Mercury of the Tarocchi is based partly on the medieval tradition, but also on a drawing of a classical Mercury made in Greece by Cyriacus of Ancona. Jupiter has his eagle, an arrow to serve as thunderbolt, and his favourite Ganymede, but he sits in a mandorla with his feet on a rainbow, just as Christ or Mary appear in Gothic cathedrals.

Placed edge to edge, they form, as it were, a symbolic ladder leading from Heaven to earth. From the summit of this ladder God, the Prima Causa, governs the world - not directly, but stepwise, ex gradibus, by means of a succession of intermediaries. The divine power is thus transmitted down to the lowest level of humanity, to the humble beggar. But the ladder can likewise be read from bottom to top; seen in this way it teaches that man may gradually raise himself in the spiritual order, reaching at last the heights of the Bonum, the Veram, and the Nobile - and that science and virtue bring him closer to God. [Jean Seznec, The Survival of the Pagan Gods]

Each figure in the Tarocchi di Mantegna has a name and a number. In some respects they remind us of the Hofämterspiel. A distinction is that the Tarocchi reflects a world order prompted by humanism, with the aristocracy and the church ranking lower than the arts, the sciences, the virtues, the planets and the spheres. The Hofämterspiel reflects feudal society.

Card games based around the Virtues and Vices, or Social Subjects, have of course been produced from time to time over the centuries. Possibly the tarot trumps were merely an alternative or condensed version of these images, which most educated people would recognise, added to a pack of cards for the purpose of making a new card game.

Thanks to Samten de Wet for additional research.

Chishty-Mujahid, Nadya: An Introduction to Western Esotericism: Essays in the Hidden Meaning of Literature, Groups, and Games, Edwin Mellen Press, 2008

Godwin, Joscelyn: The Pagan Dream of the Renaissance, Thames and Hudson, London, 2002