Hand-made “Tudor Playing Cards” by David James Binns, age 12. David wrote:  “I know the clubs aren't perfect, but I'm only twelve so I can't do them as good as real Tudor cards. I set out to make a Hewson/ Tudor replica deck after seeing Tudor artwork and Tudor playing cards. I decided to do it in the correct fashion so made pip templates out of parchment. I made the cards a size between bridge and poker size. As you can see the court cards are not a 100% Hewson design, they are merged with my own ideas as well, I gathered resources from WoPC.co.uk and a sheet of court cards from a museum. (I found the picture on a site about Tudor cards.) It is my first try and the pip stencils wore out at the end, but I am pleased about the outcome.”  We think they are excellent and successfully capture the look and feel of real Tudor playing cards. 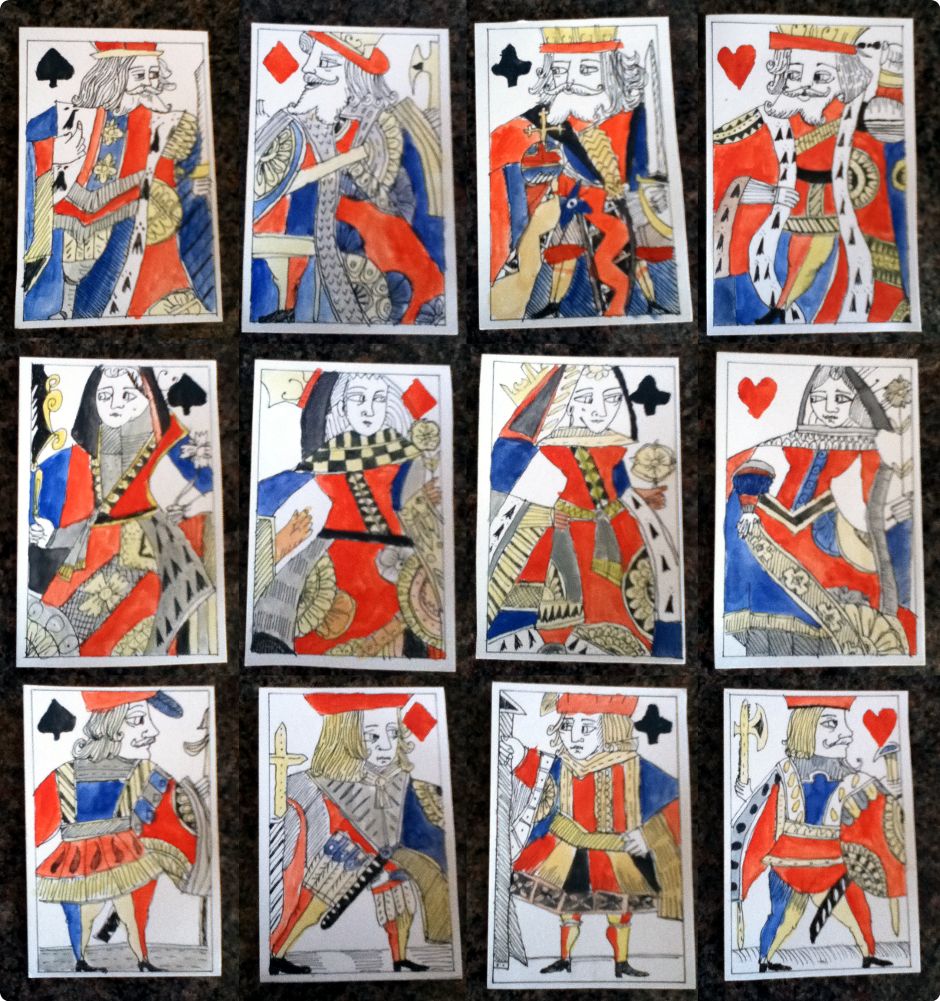 “I sought to make a more historically accurate pack of Hewson facsimile cards that would be more similar to existing replicas available today. I used laminated paper for the stencils, to recreate the “heavily oiled card” used in the 1600s. The card stock was made from white paper pasted on brown thicker paper, records state this is how cards were made in the past. I then pressed them together between wooden boards by hand. I traced the court designs directly from a print of an original Hewson sheet, to give them the most practical historical accuracy. For the paints I used watercolours to recreate the “water based paints”, I spent a while mixing the colours to get the closest colour to the real 17th century paints. I used stencils for the pip cards and hand painted the courts.” 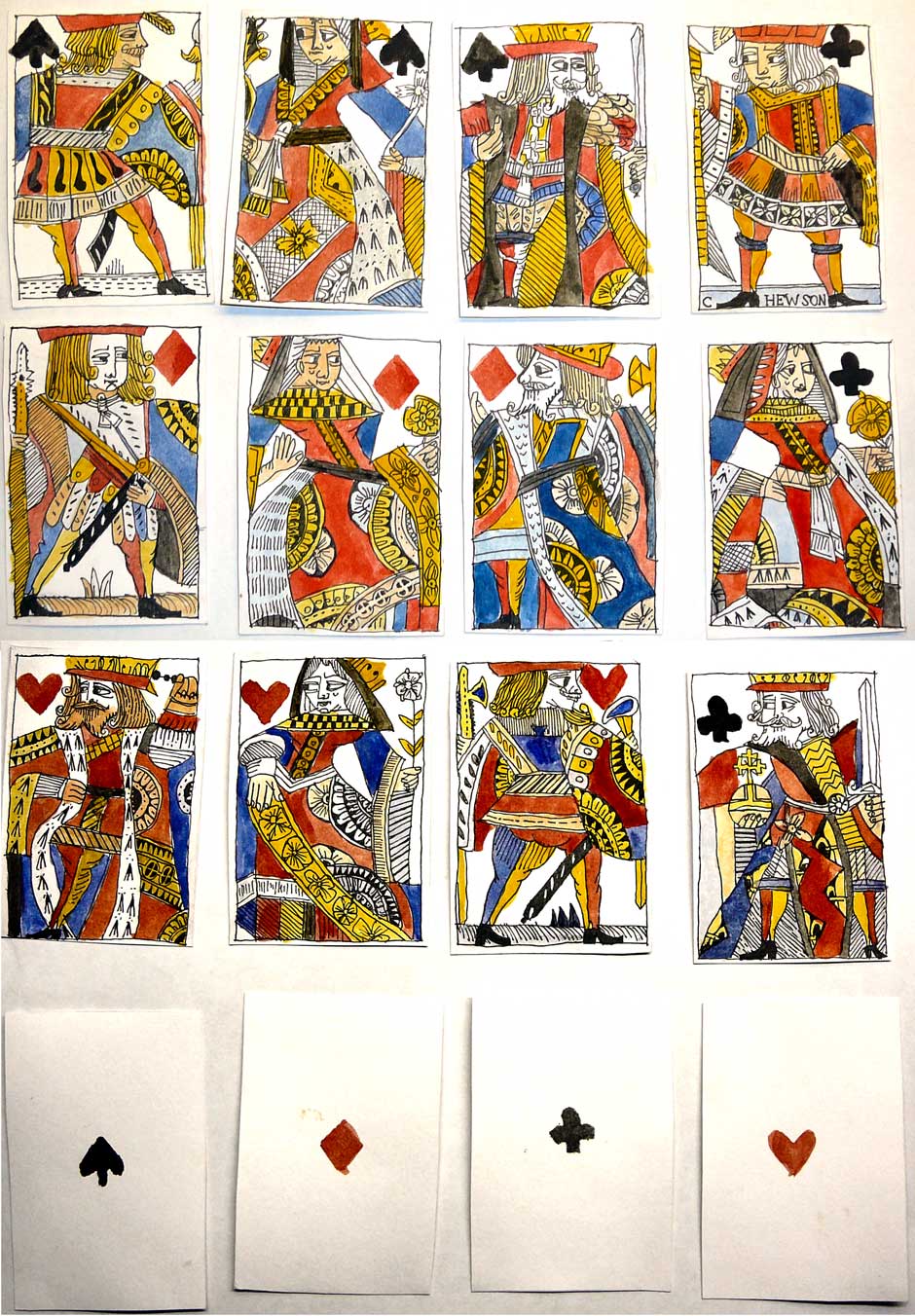 Above: hand-drawn and painted “Hewson Facsimile Playing Cards” made by David James Binns. “I pasted white paper on both sides of cartridge paper to recreate 17th century playing card stock, I then traced the court from a scan of an actual Hewson sheet dated 1680, and painted with water based paints mixed to the closest colours based on actual Hewson cards.”   Images (c) David James Binns 2013. 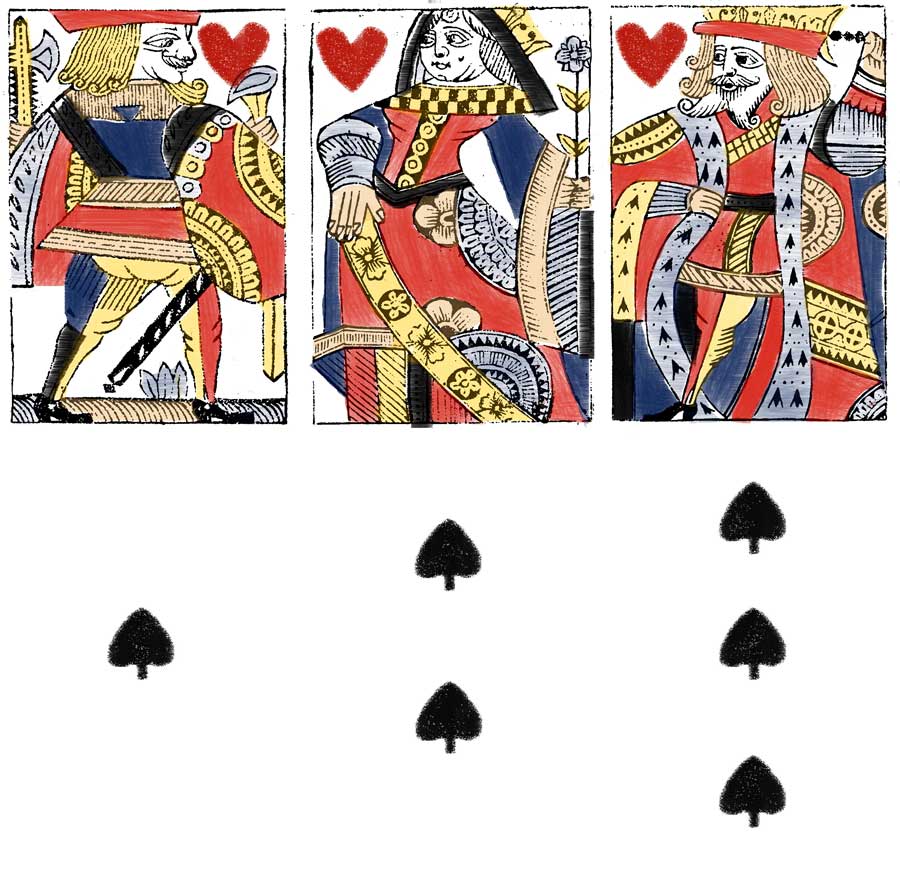 Above: these are my latest designs (August 2014). I've been experimenting with different soap polishes, and different papers. I'll make the cards out of three papers, the middle one a dark brown, I think, and polish them. This would, however, be the last digital or hand drawn pack of Hewson cards I should make I think, but that's not to say I won't still design other historical packs. A while ago, I bought some woodcut tools and have been practising on MDF, perhaps one day I could make a woodcut pack of some sort, but that would be a while away.