Facsimile edition of “Löjliga Spel Kort” (Comical playing cards, 1825) from Sweden, with engraved illustrations by the popular artist and painter Elis Chiewitz (1784-1839) featuring imaginary characters and events from Stockholm of that era. The subtitle “med Scener utur Fredmans epistlar” refers to a collection of poems and songs (‘Epistles’) by 18th century Swedish poet, songwriter and composer Carl Michael Bellman (1740–1795) in which Jean Fredman, an alcoholic former watchmaker, is the central character depicted in the scenes. The ‘Epistle’ number is shown at the bottom-right of each card, for example on the queen of hearts Epistle No 23 “Ach du min Moder!” is illustrated. The general theme is drinking, but the songs combine words and music to express feelings and moods ranging from humorous to elegiac, romantic to satirical... 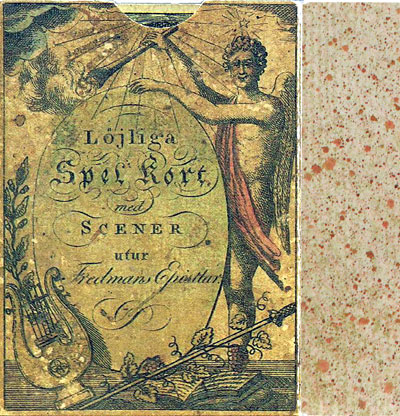 Above: the front of the box and the speckled back pattern.