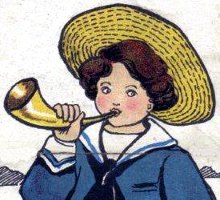 C. W. Faulkner & Co. Ltd were prolific card game manufacturers over a period of around 80 years. They produced a number of “Misfitz” games and “Little Folk Misfitz” is one of these. The cards were illustrated by Ethel Parkinson. Misfitz card games usually consisted of 72 beautifully illustrated cards making up 24 complete pictures. The aim is to assemble the three cards to make up a complete figure and then collect related sets to make a complete trick. Obviously much fun could also be had from assembling mixed up figures at children's parties, etc.

Above: C. W. Faulkner's “Little Folk Misfitz” illustrated by Ethel Parkinson and printed by chromolithography, c.1910. The reverse sides are printed in pale green to show British flags and emblems of the monarchy; sets consist of three parts, head, middle and feet - each set is named. Images courtesy Steve Campbell.