This is the final page (for now) presenting material relating to playing cards and their production. It deals with 20th century periodicals from the same archive as the other two pages.

An advert for De La rue's playing cards and the game "Alice in Wonderland". 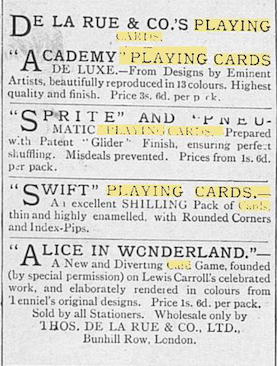 An announcement of a bridge competition and prize of two packs of Bystander cards. 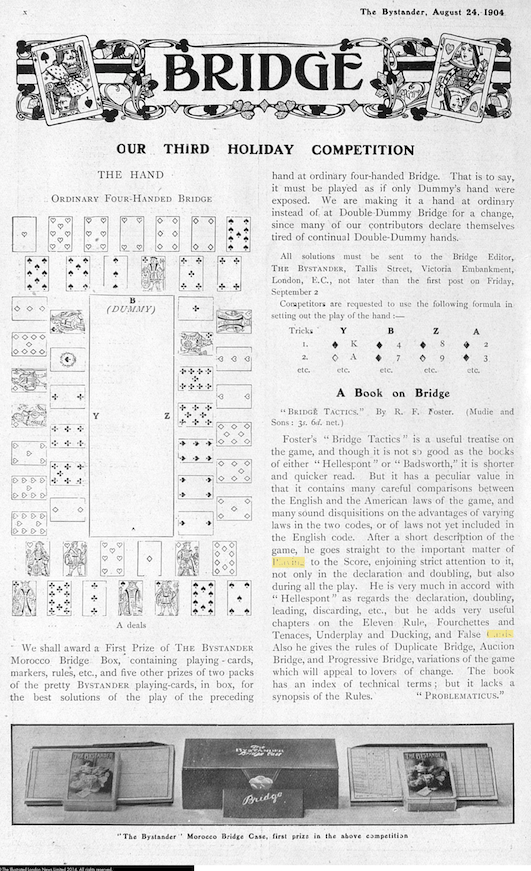 A cartoon using De La Rue's court cards as a basis for photos of famous people of the day. As it’s over two pages, there were two scans in the archive from which this is taken, hence the book-like join down the middle. 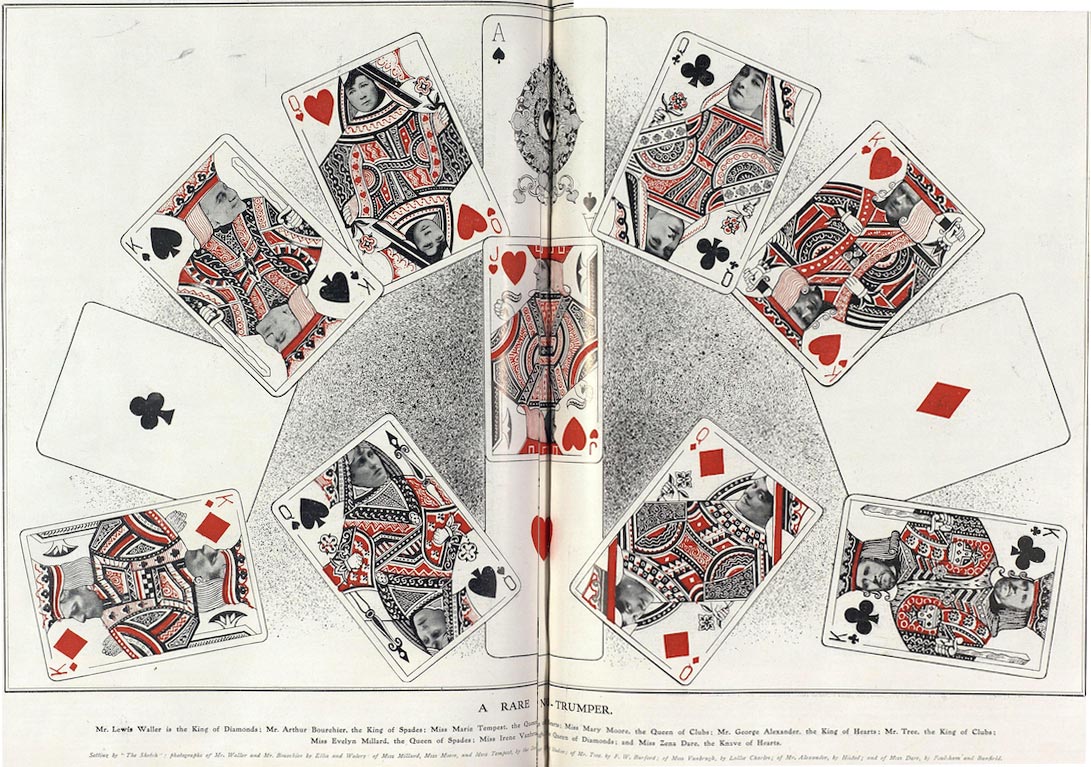 Goodall's games are on offer.

An odd advert for cards advertising Fry's Chocolate: I don't understand the reference to A.W. Ford of Bristol, a name I've never heard associated with the production of playing cards. 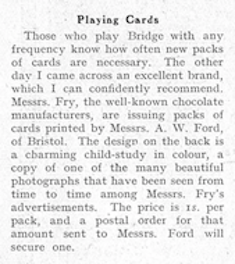 But three years later a similar pack is being advertised made by De La Rue; an interesting reference to production figures.

The Goodall packs for Bystander's Fragments are advertised in these two years; note the list of titles produced and that they were not to be reprinted. This one is from 1917. 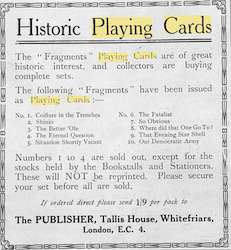 In 1920 The Sketch and The Tatler printed a series of coloured adverts for De La Rue's playing cards. 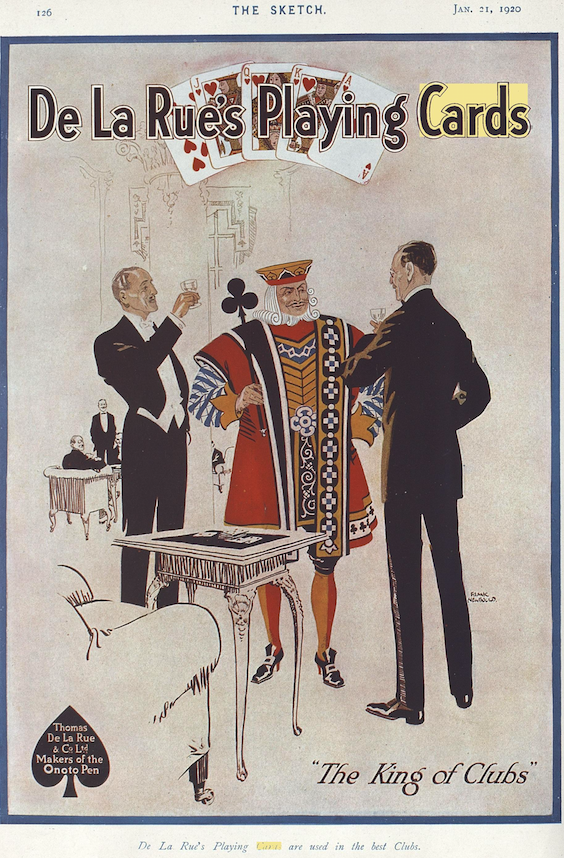 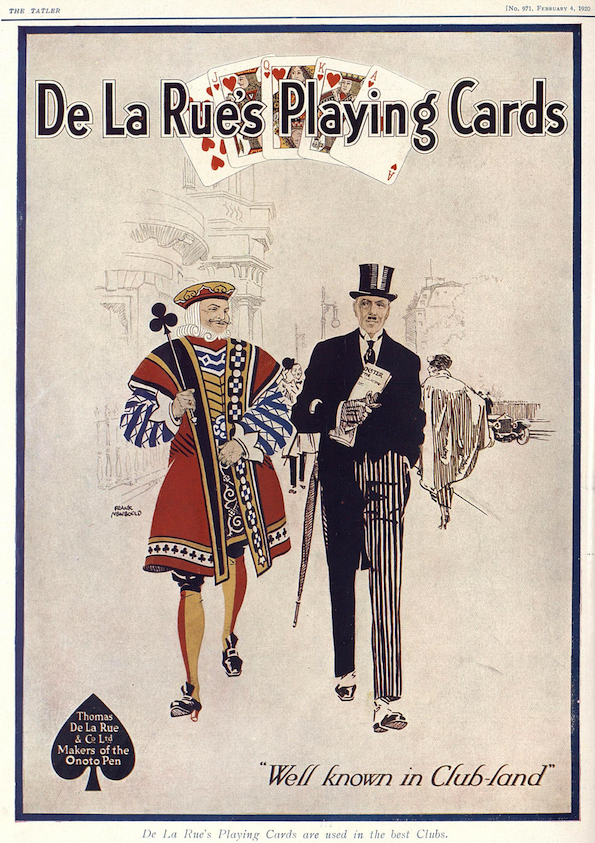 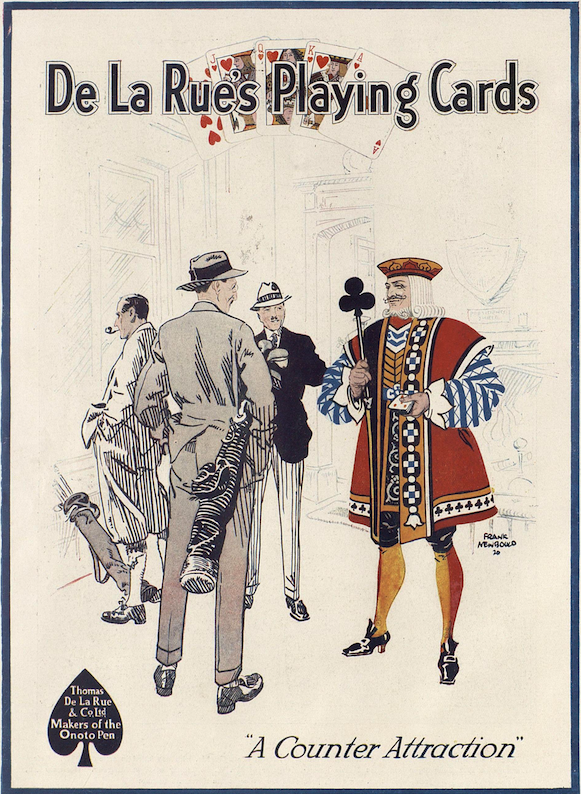 Rather more mundane adverts appeared in other papers and magazines. Goodall had been taken over by De La Rue by this time. Note that Gainsborough's 'The Blue Boy' was being used at this period: it was still being used by Waddington, right up until the 1990s, when it was printed in Belgium. 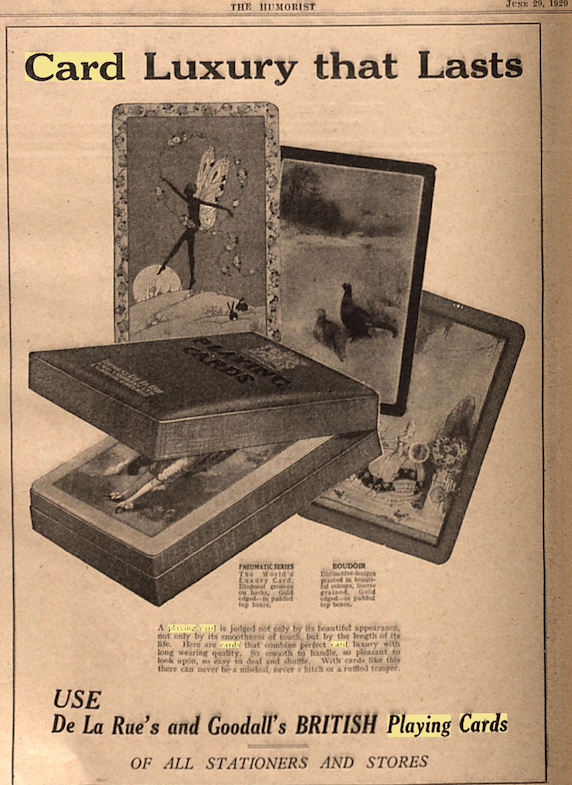 The Humorist published a black and white version of the coloured advert below from Britannia. 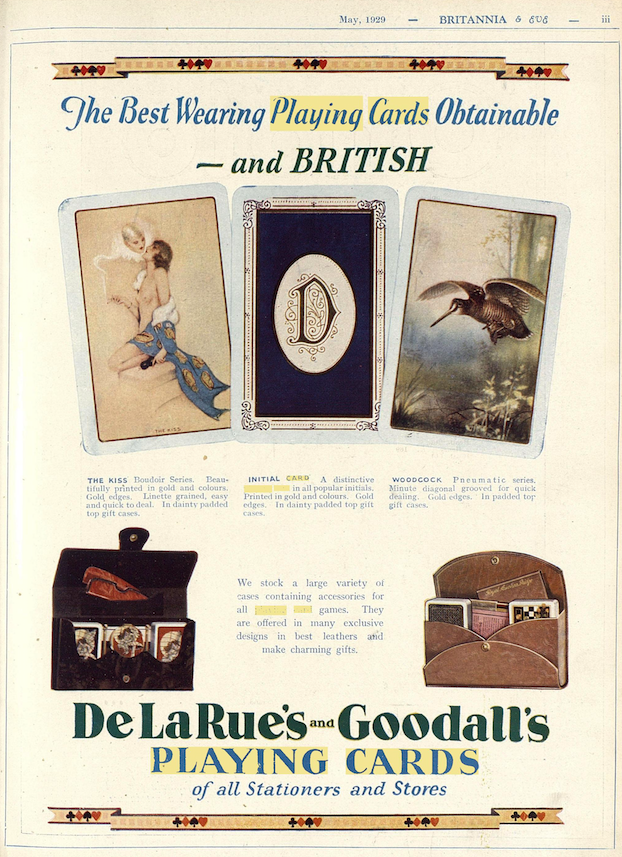 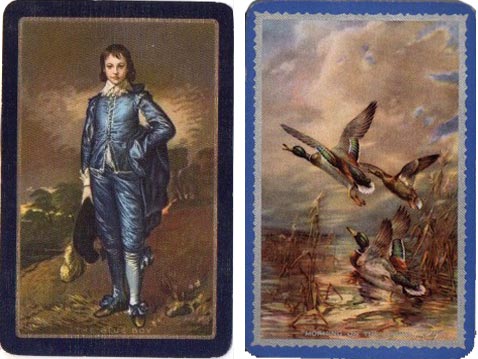 This version is from 1969-71, the brief period of The Amalgamated Playing Card Company; the 'Morning Flight' is from c.1930 in the wild birds series.

The hundredth anniversary of card-making in Altenburg was celebrated in an article in The Sphere. 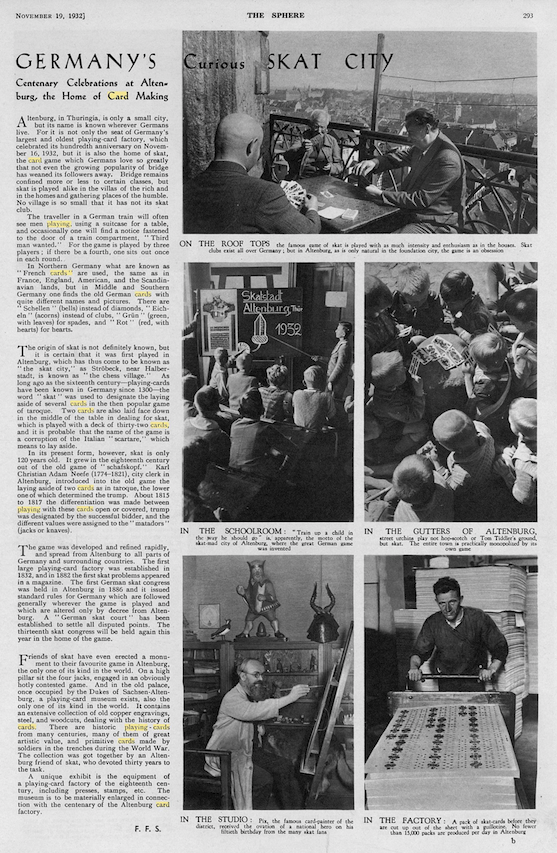 The card game Sum-it was being promoted around this time.

From 1936 the first Pepys card game are advertised. 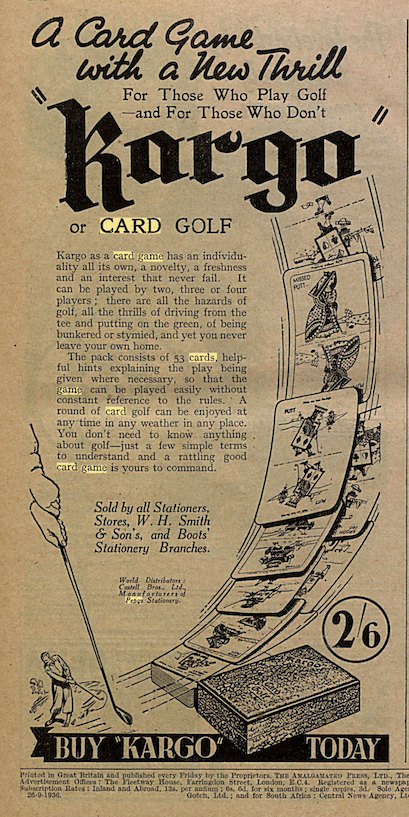 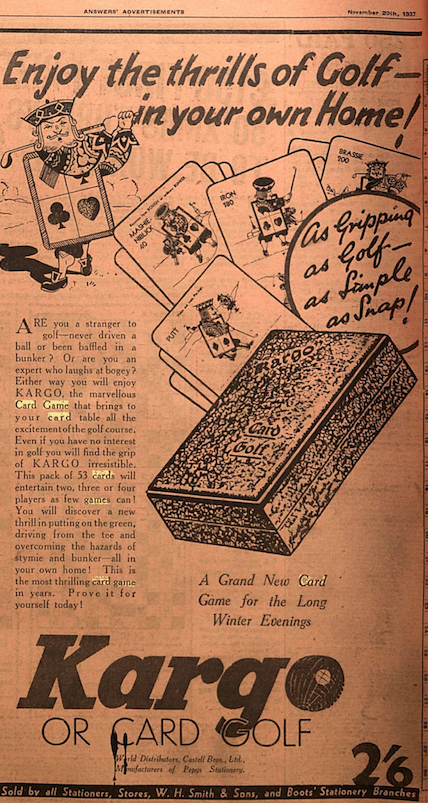 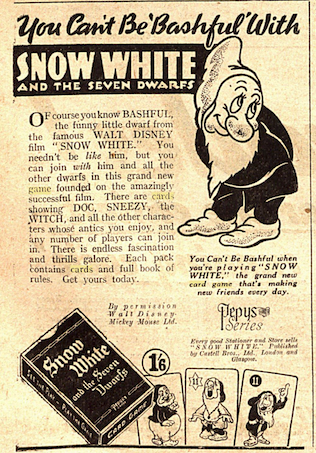 Two adverts from December 1939 refer to the onset of war. The right-hand page discusses other makers such as Multum in Parvo. 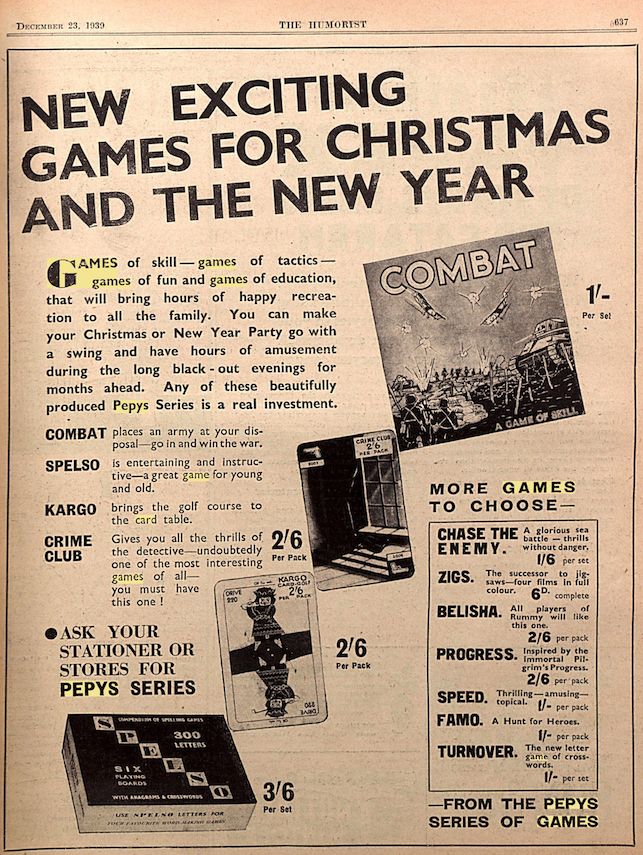 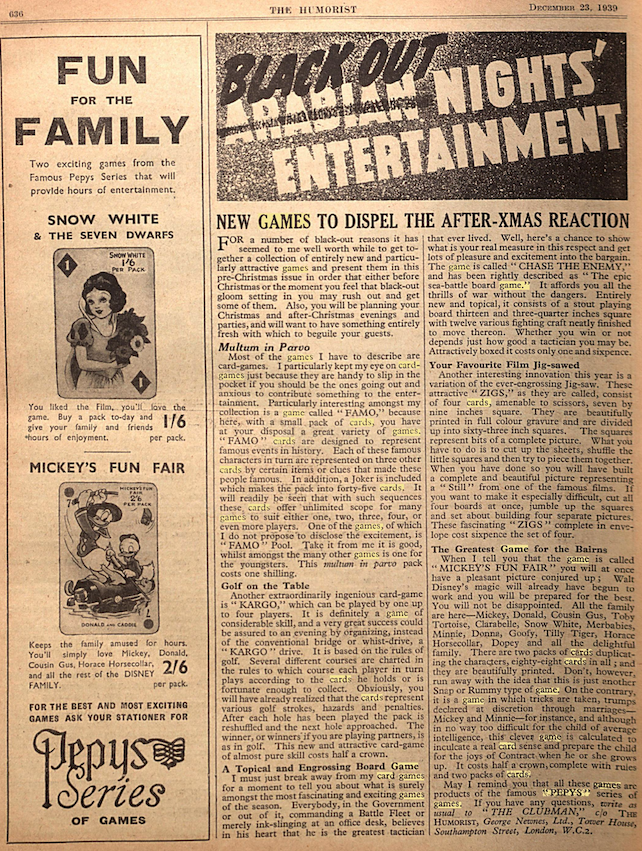 Waddington cards are advertised only sporadically, but the following give an idea of the range of what they had to offer.

Early on (they started in 1922) they seem to have introduced a variety of bridge called Buccaneer Bridge. It was to be played with a 56-card pack with 'ones' in addition to the aces. I've never seen a pack of these: has anyone else? 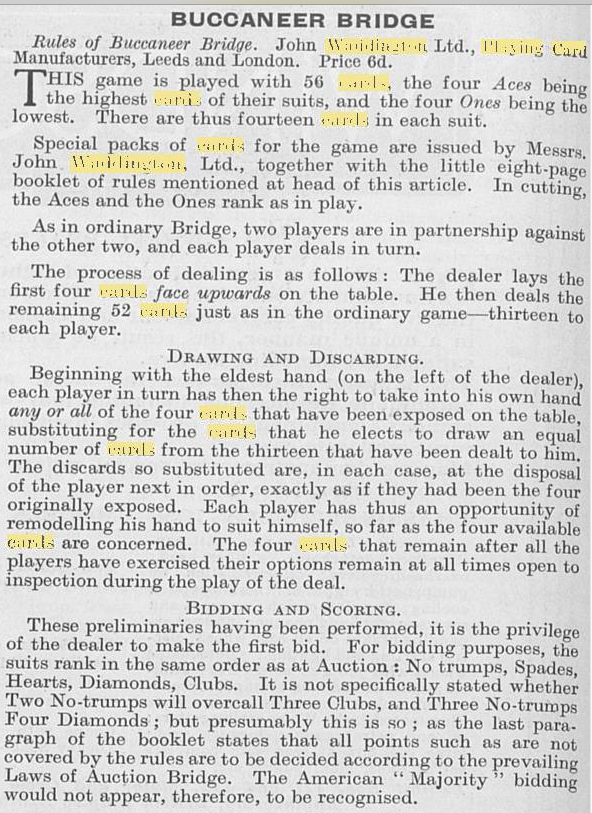 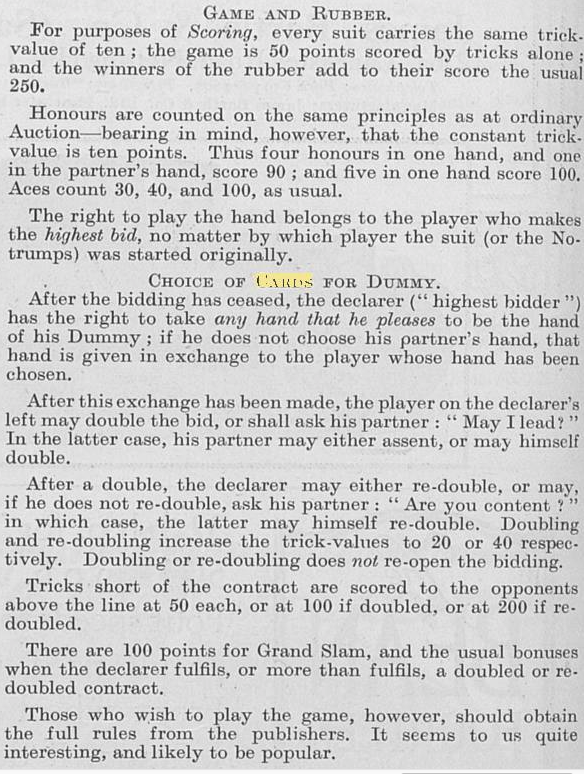 An advert for some of their up-market playing cards with Kirchner and Barribal backs. 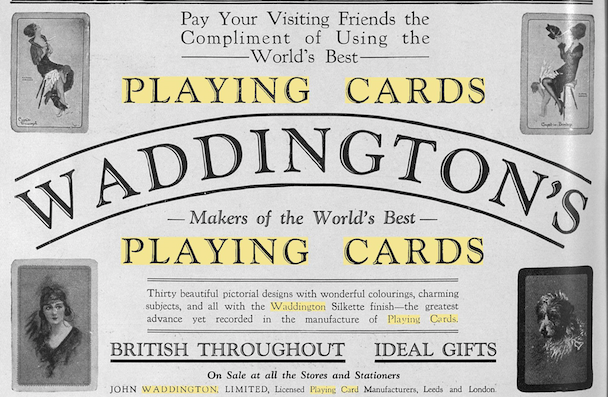 W2.1 bridge-size courts from the period

Three games from this year. 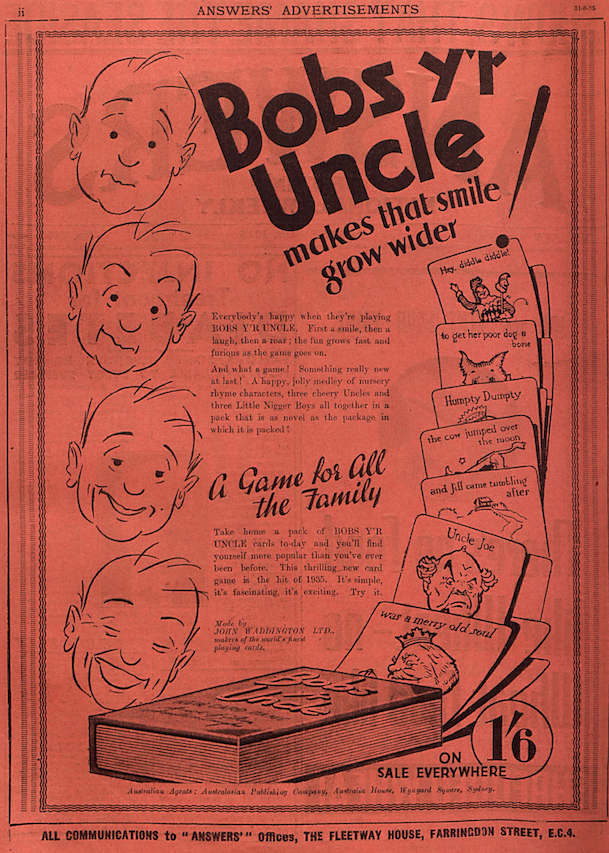 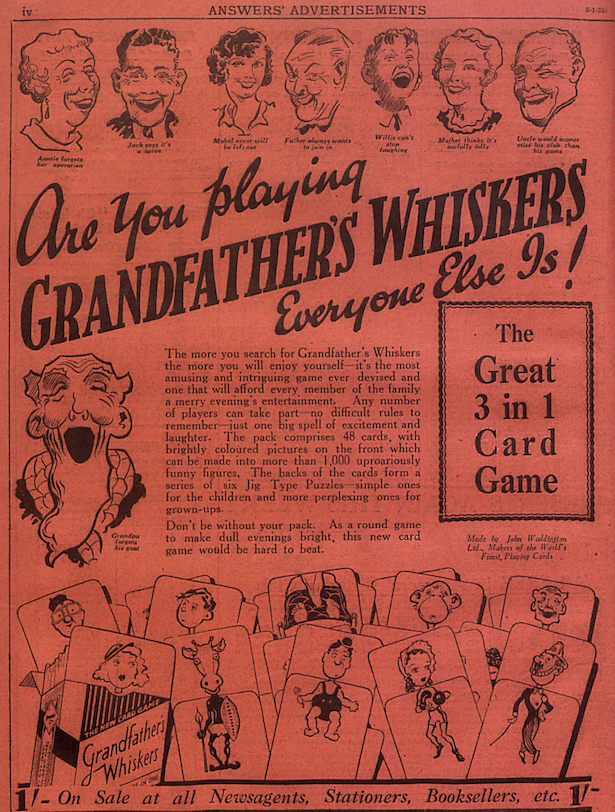 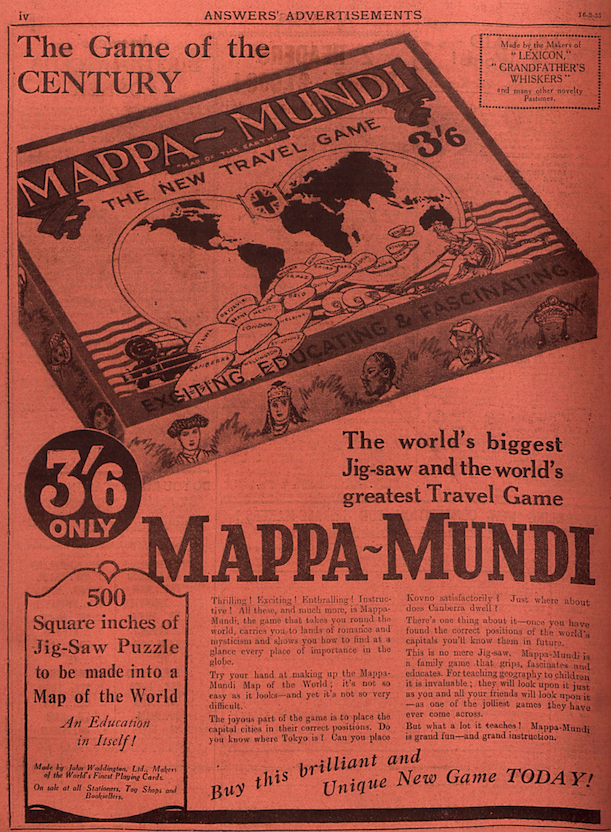 Waddington introduced Par Bridge in 1938, of which there is a short notice below. It had hands to play out on the backs of the cards and was also intended to help beginning learn how to bid successfully. It continued until at least 1947.

By the end of the 1950s the firm had introduced or reintroduced a number of different card formats: Zulu, Kon-Vex, Rondo, wide and slimline. Kon-Vex had been introduced for the Coronation in 1953. 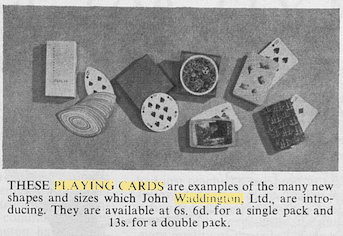 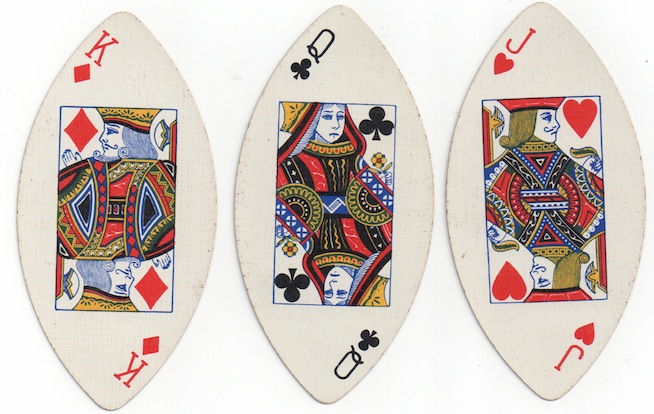 Siriol Clarry's pack of the Four Elements was introduced this year. Here is part of a review of the cards. 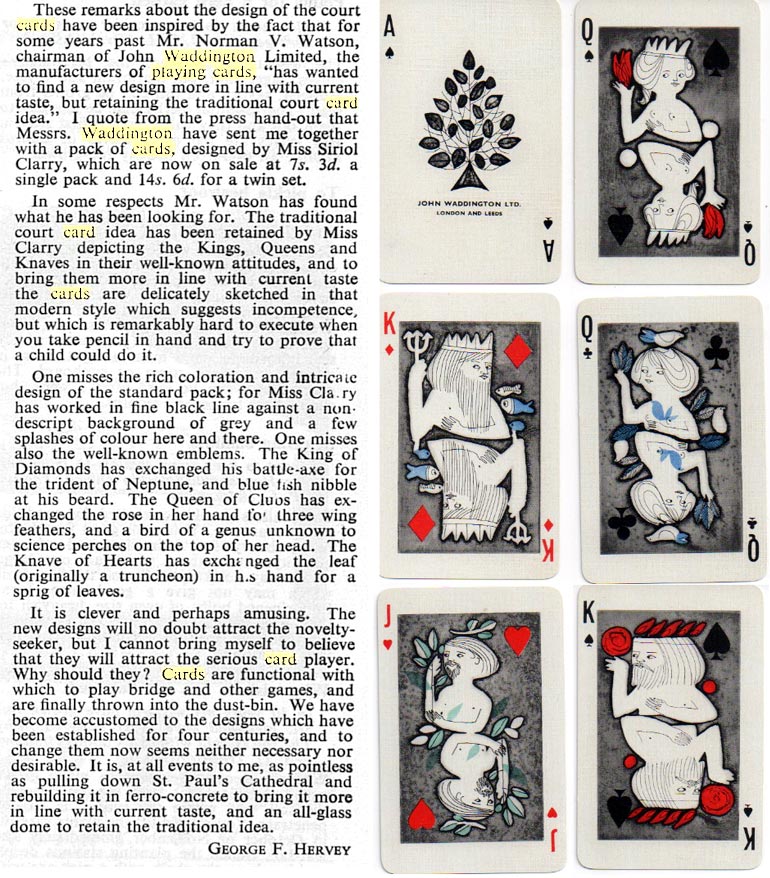 As I said, there are not many actual adverts for Waddington's cards, but here's one from 1962; it had been in use since 1954! The prices are interesting and note the reference to Calypso. 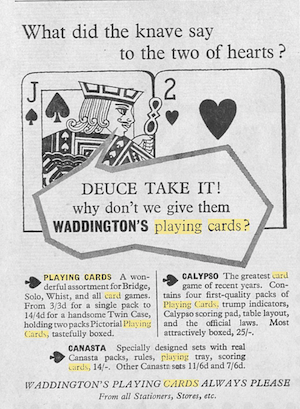 The reaffirmation of the establishment of the Amalgamated Playing Card Company, a 50-50 enterprise between De La Rue and Waddington, initially established during the Second World War in 1942 after the loss of De La Rue's Bunhill Row factory in the Blitz, was announced in 1963. The acquisition of Grimaud and Simon is referred to.

Grimaud's Tarot de Marseille is advertised in the UK, probably for the first time. 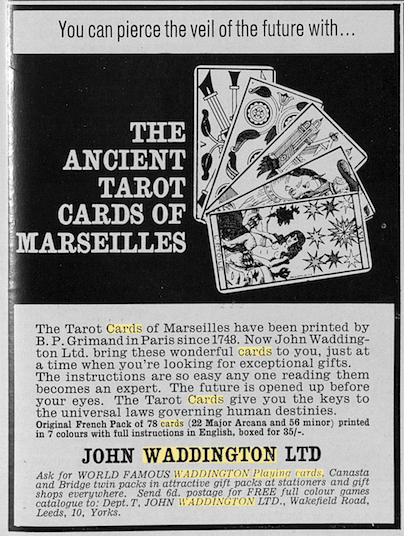