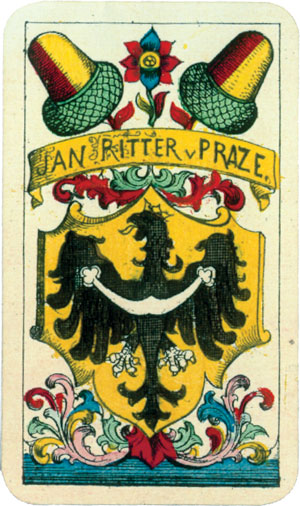 During the 19th century Czech language, culture and National Identity were revived, as distinct from the dominant German culture of the Austro-hungarian Empire of which the Czech lands were a part. As a result, the Czech language has been restored as an official language in the Czech lands and is now used by the vast majority of Czechs. The name “Hussite” comes from the followers of Jan Hus (1373-1415), a church reformer and early creator of Czech as a literary language.

The “Hussite” Pack was engraved by Karel Hoffmann and first printed by Jan Ritter in 1895. Although German suit symbols are used, Czech historical persons are depicted on the court cards, including Jan Zizka (blinded in one eye and whose death is depicted on the Eight of Leaves), Ottokar II, Prokop the Bald, George ‘Jiri’ of Podebrad and Wenceslas (Vaclav) IV. The Daus (Two) of Acorns shows the arms of Silesia; Hearts shows the arms of Bohemia; Leaves the arms of Tabor. Other cards show wine making and local people. 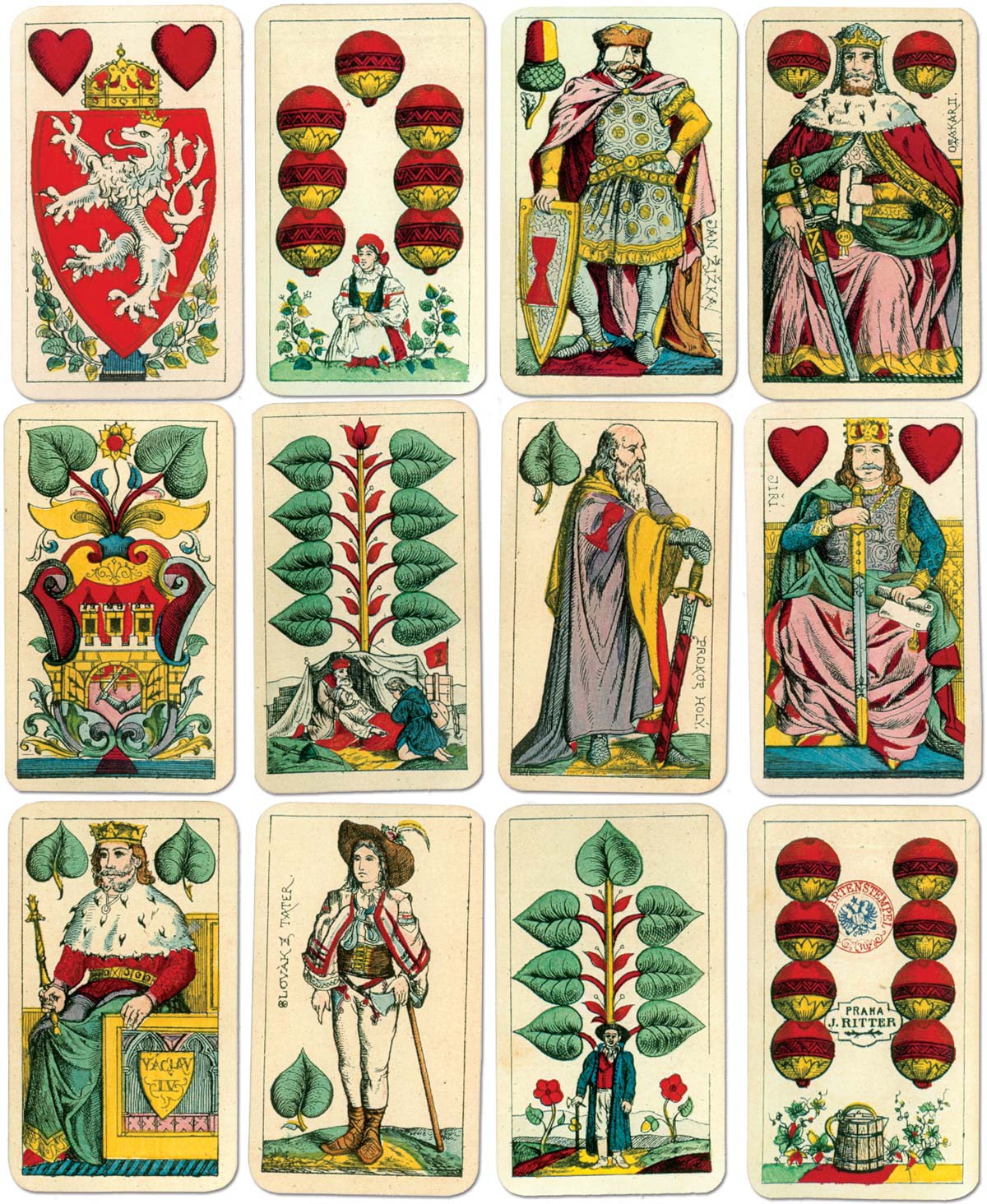 Above: Czech “Hussite” playing cards engraved by Karel Hoffmann and first printed by Jan Ritter in 1895. The tax stamp on the 8 of Bells was in use in Austria from 1900 to 1920 suggesting that this pack was a slightly later edition. 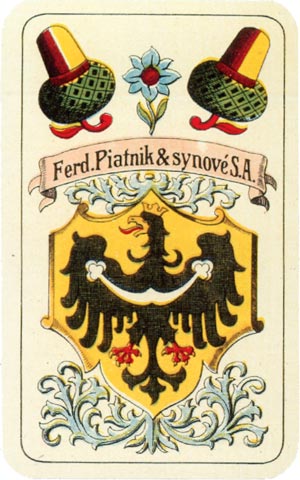 In 1899 Ritter sold his playing card business to Piatnik. A condition of the deal was that card production would continue in Prague. In 1927 a new factory was built in Prague named Ferd. Piatnik & Synové S.A. and it was probably then that a second edition of the “Hussite” Pack was printed.

In the Piatnik edition the cards have been redrawn but generally follow the same designs of the earlier pack. The Daus (Two) of Leaves in this edition features the arms of Slovakia and the Daus of Bells the arms of Monrovia. The Seven of Hearts shows the Petrin Tower, a smaller version of the Eiffel Tower in Paris, which still stands today. 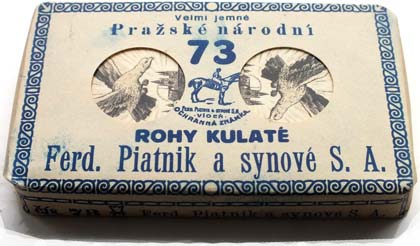 The Spodek of Acorns depicts a Silesian ('Slezan'). Jaroslav Sternberg (Svrsek of Hearts) was a mythical figure said to have defeated the invading Mongol hoardes at the Battle of Olmonouc. 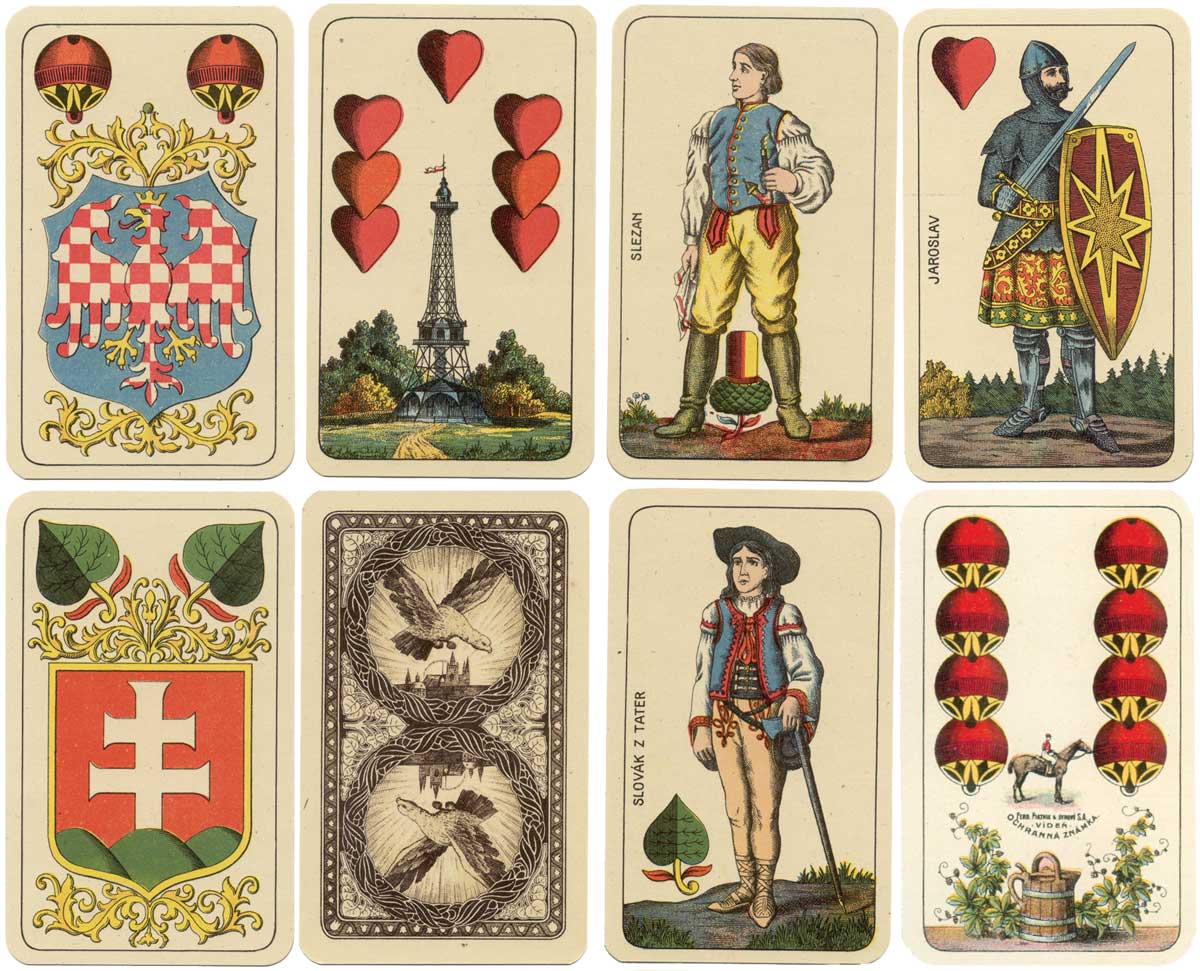 Šťáhlavsky, Zdenĕk: "A Czech Hussite Pack for the 1895 Ethnographical Exhintion in Prague", The Playing-Card vol.34 no.4, April-June 2006, IPCS, England.