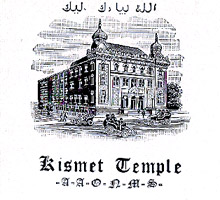 A special pack for the Kismet Temple made by the Pyramid P.C.Co., Brooklyn, New York, 1923. The deck was made to honour Conrad V. Dykeman as Imperial Potentate of the Kismet Temple of the Ancient Arab Order of the Nobles of the Mystic Shrine, a spin off of the Free and Accepted Masons. The inscriptions on the back and over the picture of the Temple probably name it in Arabic. The Order was formed by 13 Masons who met on September 26, 1879, in the New York Masonic Hall located on east 13th Street. The Scimitar, Crescent and Star grouping is a Masonic emblem which the A.A.O.N.M.S. adopted for its various Temples   learn more → 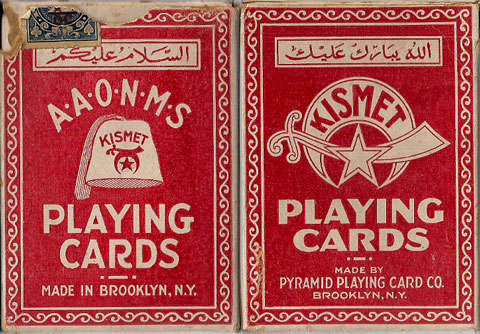 Above: special pack made for the Kismet Temple by the Pyramid P.C.Co., 1923.

Right: the front and back of the box. Click to zoom→