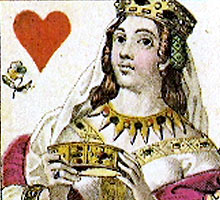 Gumppenberg of Milan was responsible for this magnificent non-standard tarot which is inspired by the history of the Lombard Iron Crown or “Corona Ferrea”. The Trumps depict historical scenes primarily of the political period known as the Holy Roman Empire from the 6th to 16th century. For example, in Trump II Teodolinda, widowed by her husband King Autari, chooses the young duke of Turin, Agilulfo, to be her next husband. In Trump XII Ludwig the Bavarian refuses the crown of Germany after Henry V's death in 1313. In Trump XVI we see Ludwig stricken with an apoplectic stroke while hunting. The court cards are named: the Queen of Hearts depicts Teodolinda, now married to Agilulfo, etc.  see below for full descriptions. 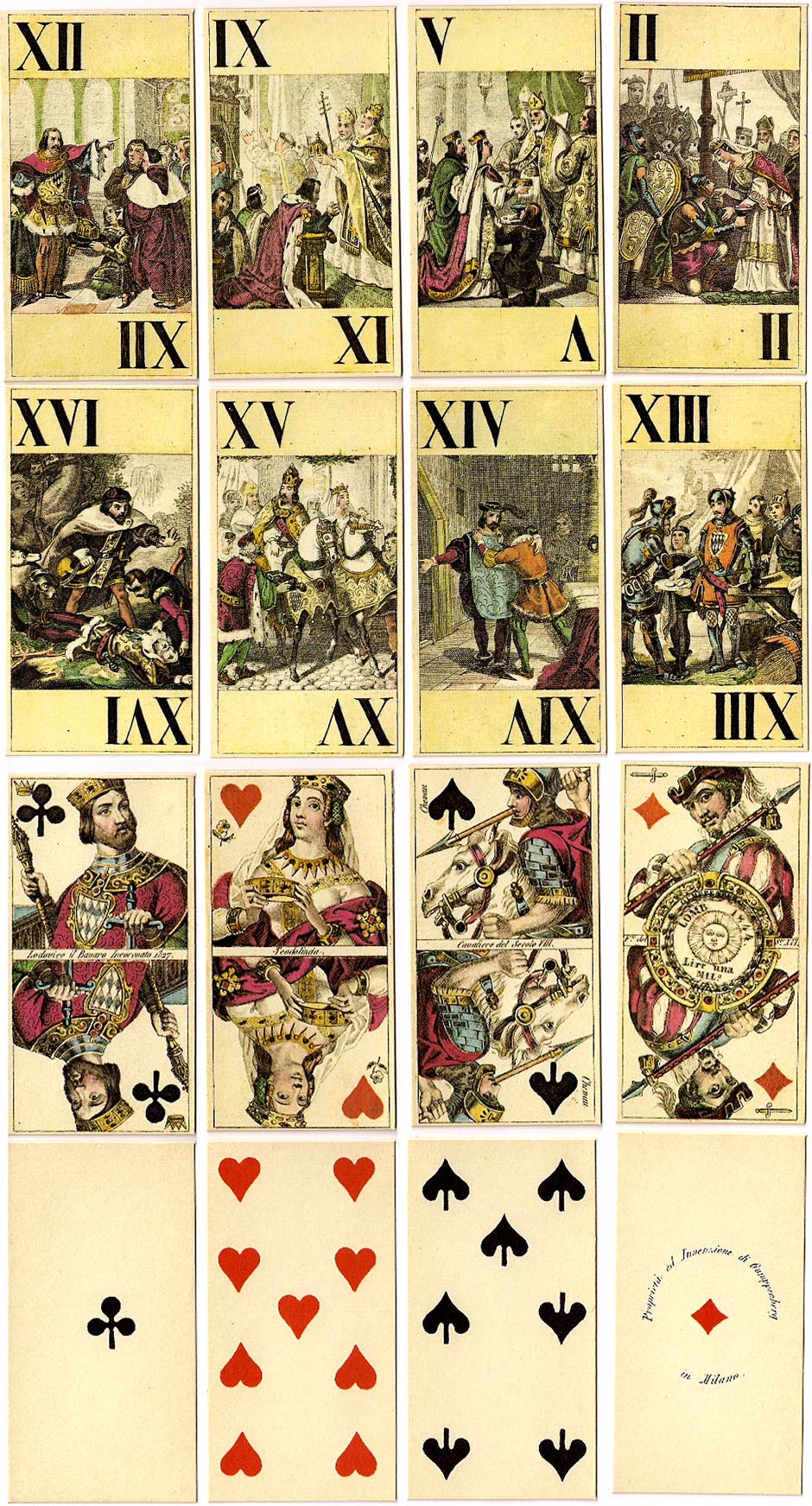 Above: Tarocco della “Corona Ferrea”. The deck is believed to have been originally issued in the 1830s by Ferdinando Gumppenberg whose name still appears on the Ace of Diamonds. A second edition was issued by his successor, Lattanzio Lamperti in c.1844 (see date on Jack of Diamonds). This facsimile edition by Edizioni del Solleone, Lissone, 1979. 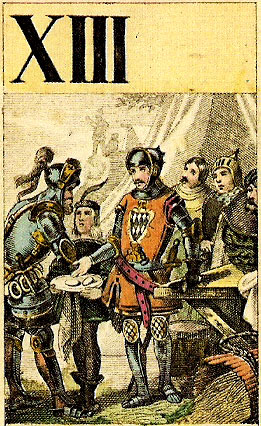 The scenes on the Trump cards (not all shown here) include: Excuse with wings and wearing stocking cap, Trump I is a motley figure in blackface with cards strewn on the ground, II Teodolinda, widowed by her husband, King Autari, chooses the young duke of Turin, Agilulfo, to be her next husband, III liberation of Italian subjects after Agilulfo pays a large ransom in gold, IV Queen Teodolinda examining plans for Monza Cathedral of St. John the Baptist, V Teodolinda and Agilulfo offering gifts to the church, VI Queen Teodolinda in the last moments of her life, her son at her bedside, VII King Desiderius of Lombardy is delivered in 774 into the hands of Charlemagne, VIII Charlemagne persuading the warrior king of the Saxons to be baptized, IX Coronation of Charlemagne on Christmas Day in 800 as emperor of the West by Pope Leo III in St. Peter's Cathedral of Rome, X Charlemagne founding a public school in Pavia, XI Charlemagne in his old age sharing the throne of emperor with his only surviving son, Louis, XII Ludwig the Bavarian refusing the crown of Germany after Henry V's death in 1313

Trump XIII (right) relates the story that after Ludwig defeated Frederick of Austria, the only provision to refresh the soldiers was eggs, one for each man, but there was one extra egg which Ludwig declared in the presence of all should go to the valiant general Schwepperman, XIV Ludwig freeing Frederick, XV Ludwig and his wife, Margaret on their way to St. Peter's Cathedral in Rome where he was crowned with the Iron Crown and she with the golden one, XVI Ludwig stricken with an apoplectic stroke while hunting, XVII Charles V being appointed emperor in 1519, XVIII Carlo V receiving the Iron Crown in 1530 at the papal palace in Bologna, XIX Titan painting the portrait of Charles V, XX portrays Charles V's opposition to the doctrines of Luther which led him to ride through the streets of Main wearing his imperial robes as a show of his power and Catholic belief, XXI shows Charles V synchronizing two clocks. The double-ended court cards portray rulers and soldiers of the times and include on the King of Spades, Carlo Magno (Charlemagne) receiving in 775 the Iron Crown of the Lombard kings, his wife, Ermengarda on the queen of spades, and a cavalier and valet of the 8th century on the remaining two court cards. The King of Hearts depicts Agilulfo and the Queen of Hearts is his wife, Teodolinda, and a cavalier and valet from the 6th century. The King of Clubs is Ludwig of Bavaria and on the Queen is his wife, Margaret, and a cavalier and valet from the 14th century, and the King of Diamonds depicts Charles V and on the Queen is his wife, Eleonora, and a cavalier and valet from the 16th century.

Images on this page are from the collection of Rod Starling, author of "The Art and Pleasures of Playing Cards".