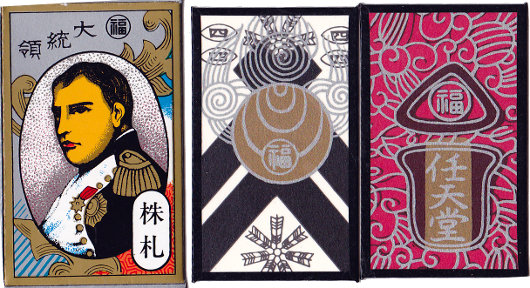 Kabufuda cards are directly descended from the original latin-suited Portuguese playing cards imported into Japan during the 16th century. When the Portuguese came to Japan the locals copied their cards and they are still in frequent use today. However, only one suit is used, copied four times: the cards in the suit of batons have been stylised, with values running from 1-9 + Knave (counting as 10). The Knave follows the double-ended European design. This series of cards is repeated 4 times, giving us a complete deck of 40 cards. The wrapper (shown right) for some reason has a portrait of Napoleon. 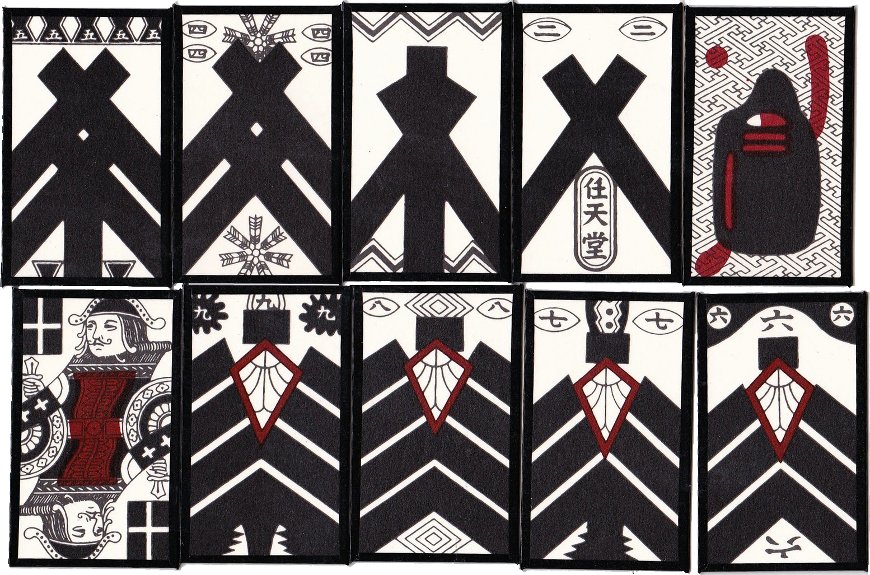 Above: Kabufuda playing cards manufactured by Nintendo, Japan. 40 cards + 1 extra card. Kabufuda cards are one of several regional games based on European playing cards that became popular in Japan after the Tokugawa shogunate banned the importation of the European originals. This was not the first time that Nintendo used Napoleon Bonaparte likeness on a product. Later in the nineteen seventies Nintendo released a strategy board game called Napoleon. It was popular enough to warrant a miniature version that was a part of the Mini Game series. Also interesting to note is that years later Nintendo created a Nintendo subsidiary called 'Napoleon' with the intention of selling Nintendo playing cards outside of Japan. The division failed and was later dissolved. Image by courtesy of Anthony Lee (anthonylesq.blogspot.com)