These cards have retained much of their original appearance to Portuguese “dragon cards” but over time local influences and traditions have localised the designs. The first copies of western-style playing cards were made in Japan during the Tenshou Era (1573~1591) and became known as Tenshou Karuta. Subsequently, in the Edo period, they were developed further into Unsun Karuta. While Tenshou Karuta had 48 cards, Unsun Karuta has 75 cards and more complicated rules. As Unsun Karuta gained popularity, the gambling potential of the game caused it to be banned. Believed to have entirely disappeared, it survived in the Hitoyoshi region in Kumamoto. 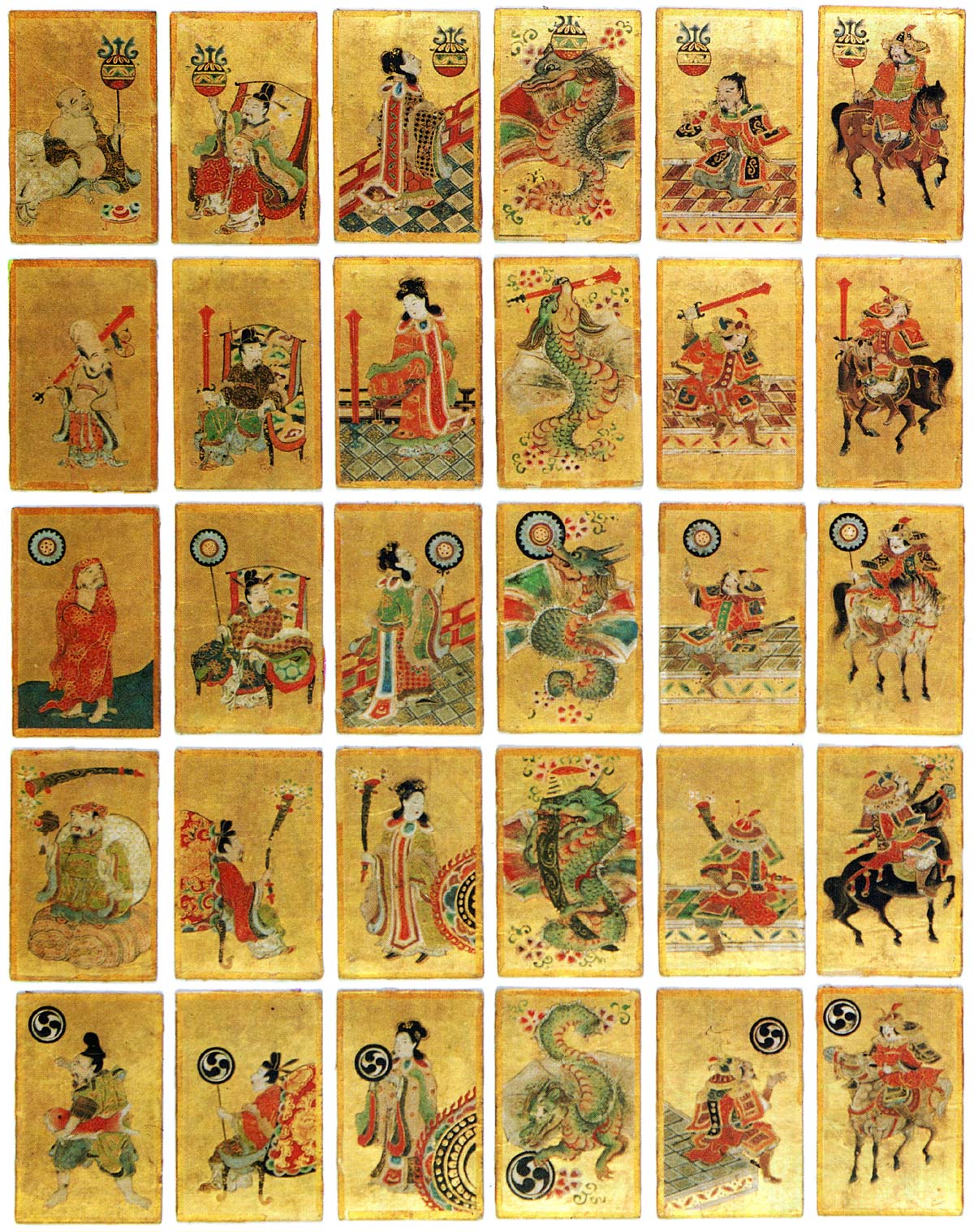 Above: 30 cards from an 18th century hand-painted Unsun Karuta pack. The complete pack has 5 suits of 15 cards: Cups, Swords, Coins, Batons and Tomoe or Drums. Each suit has six court cards: Un (a god of good luck or, in one instance, Daruma, a Zen Buddhist); Sum (an enthroned Chinese official); Sota (a maid); Robai (a dragon which has been transferred from the Portuguese aces to the Japanese court); Kiri or Koshi (King or other enthroned person), and Uma (Cavalier or simply a horse). There are also numerals 9-1, the aces being represented simply by a single suit symbol without a dragon see more here►

Whilst the “dragon cards” have been preserved in the deck along with an extended court, there are also aces with single suit symbols. Thus numerals 1-9, plus five court cards + dragon card in each of FIVE suits = 75 cards. 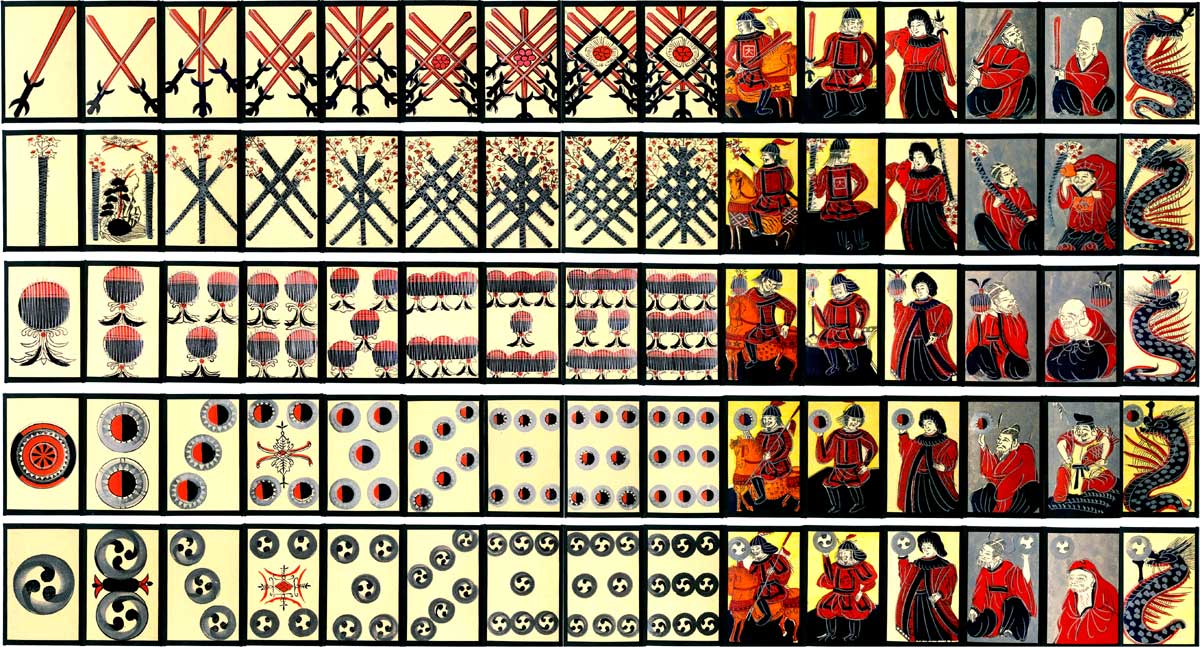 A typical way of playing involves 8 players divided into 2 groups of 4 people who alternately perform trick-taking.

Further References (with thanks to Alex Concutelli for extra research) 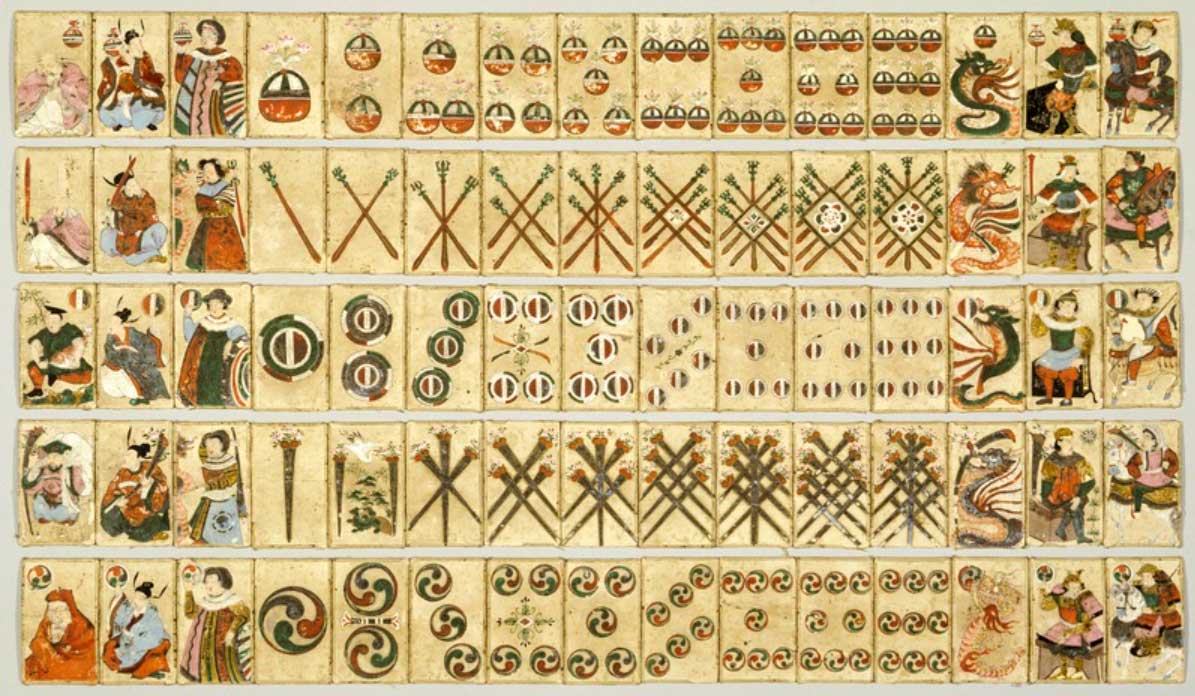 Above: Unsun Karuta, 17th century. The Portuguese were banned from visiting Japan in 1639, but it is believed that these cards were made around that time. Kyushu National Museum, Collection number A20►

A description of the rules of Unsun Karuta can be found here and here - usually the browser suggests to translate the page.

Link to Hitoyoshi tourist region, the only place where Unsun Karuta was not banned

Keizaburo Yamaguchi (1928-2012): Unsun Karuta: An Outline History of Unsun-Karuta: (Old Japanese Playing Card of Portuguese Origin), published by Tekisui Art Museum at the Yamaguchi Culture Hall, 1967. Keizaburo Yamaguchi was a Japanese art historian; here he relates how playing cards were imported into Japan in the seventeenth-century, and then explains how and where these cards were adapted by the Japanese and how a popular social movement grew up around them. 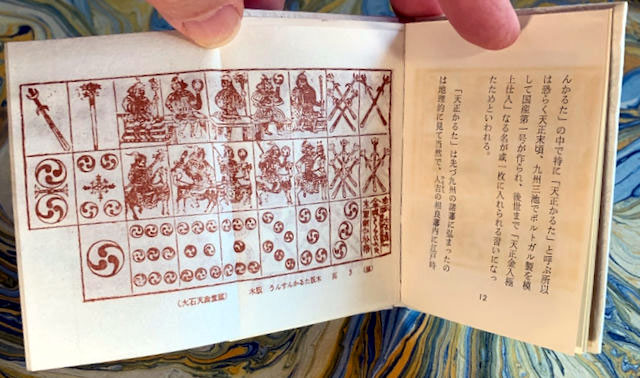 Above: image from Keizaburo Yamaguchi book.