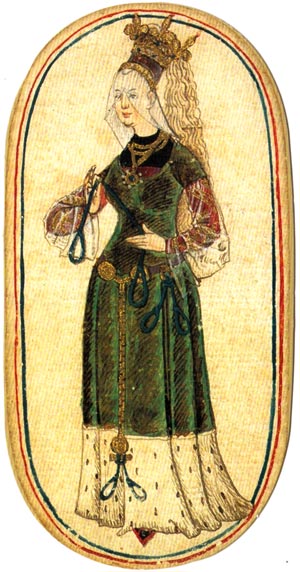 Fifteenth century playing cards display little conformity amongst themselves in terms of the number of cards, their shape, suit symbols or court card hierarchy. This unique set of medieval playing cards has 52 cards with King, Queen, Knave and numeral cards from one to ten in each of the four suits of dog collars, tethers (for the hounds), gaming nooses (for birds or small game), and hunting horns. The collars and horns are red and the tethers and nooses are blue. These suits refer to the pursuit of hunting, as practised by the nobility.   See: press article►

The cards are made from four sheets of paper glued together to form a stiff pasteboard. The oval outline of each card was traced onto the card and the unpainted cards were then cut out. The border around each card was then scored so that the blue and red lines could be painted in afterwards. Stencils were probably used to ensure the uniformity of the suit symbols, whilst the court cards were produced entirely freehand. Representation of court figures was not yet bound by any convention, so these figures uniformly stand in three-quarter profile with one foot leading forwards, holding objects in their hand. The artist's style suggests an origin in the Burgundian Lowlands (former French province and modern-day French région). The backs of the cards are plain paper, unpainted. 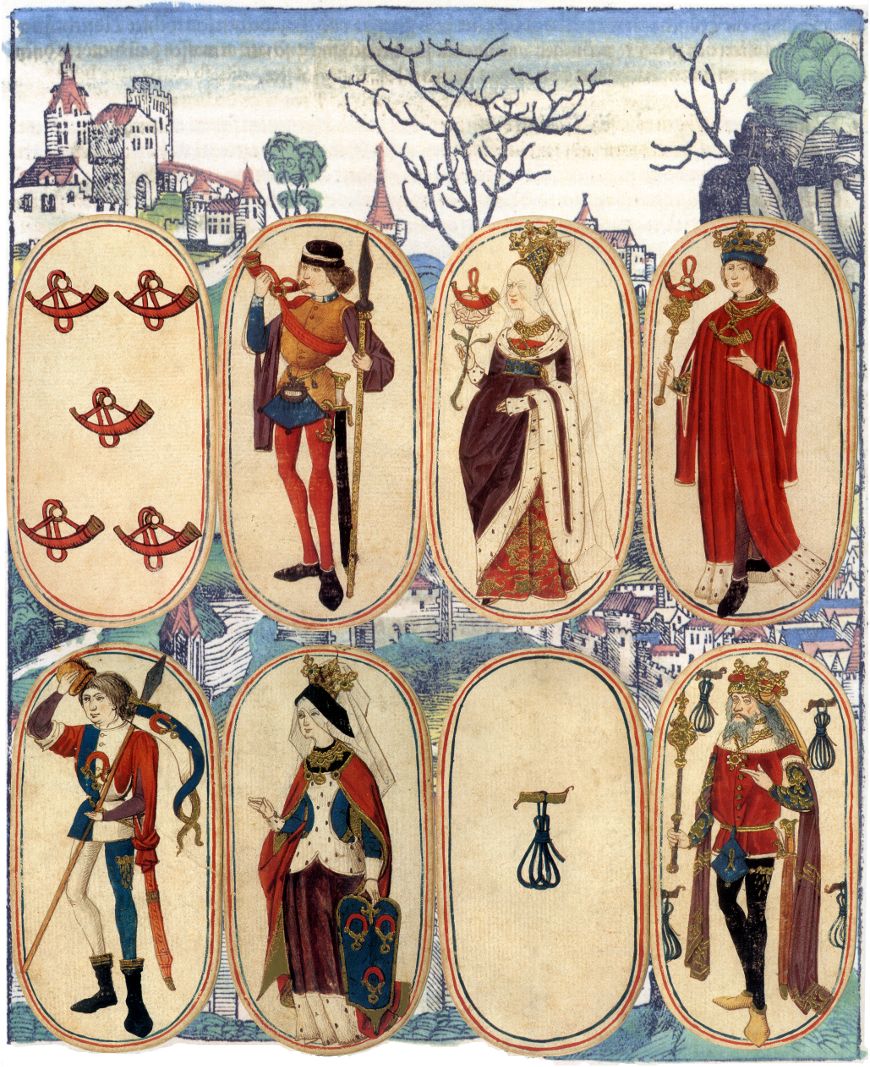 Above: cards from the hand-drawn and painted Flemish Hunting Deck believed to have been produced in France or Burgundy, late XV century. The court cards are dressed in costumes fashionable at the courts of the Burgundian dukes in the second and third quarters of the fifteenth century. The Knave of Collars is apparently a Jester and holds a Jester's staff in one hand, whilst hooking the thumb of his other hard under his belt. The colour pigments include red ochre, earth green, azurite and lead-tin yellow, bound in gum arabic, as well as gold and silver. The techniques employed in the manufacture of these cards suggest that they were the product of a workshop whose operations were governed by a division of labour and by regulations which would have been in force in the local area. The cards shown are from the facsimile edition published by Piatnik, Vienna, 1994, which contains a descriptive booklet written by Timothy B. Husband. The original cards are preserved in The Cloisters Collection, The Metropolitan Museum of Art (1983.515.1–.52)►

This is one of a short series of ancient reproductions by Piatnik. See also:  Ambraser Hofjagdspiel   Stuttgart Hunting Pack   Hunting depicted in Playing Cards►